Accessibility links
What Voters In 6 Swing States Say About Trump And Biden For many, this election is a "clear choice." Here's what voters said in interviews in six key swing states about President Trump and Democratic presidential candidate Joe Biden. 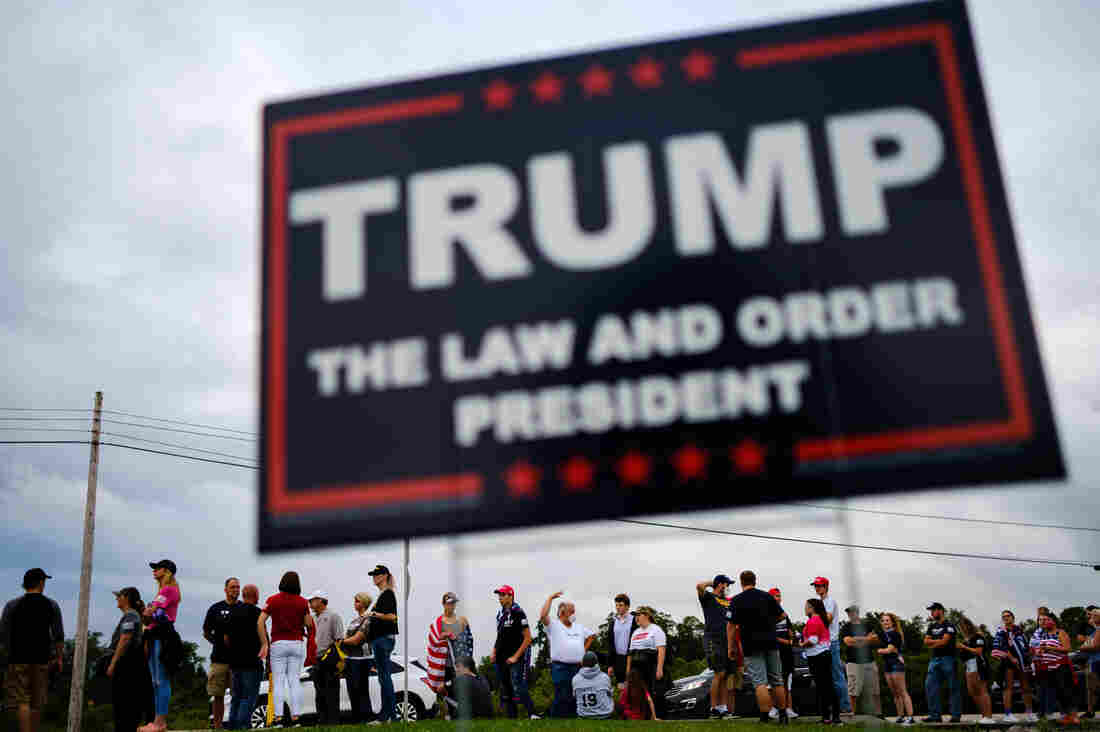 Supporters of President Trump line up outside of Arnold Palmer Regional Airport to get into a Sept. 3 rally in Latrobe, Pa. Michael Swensen for NPR hide caption 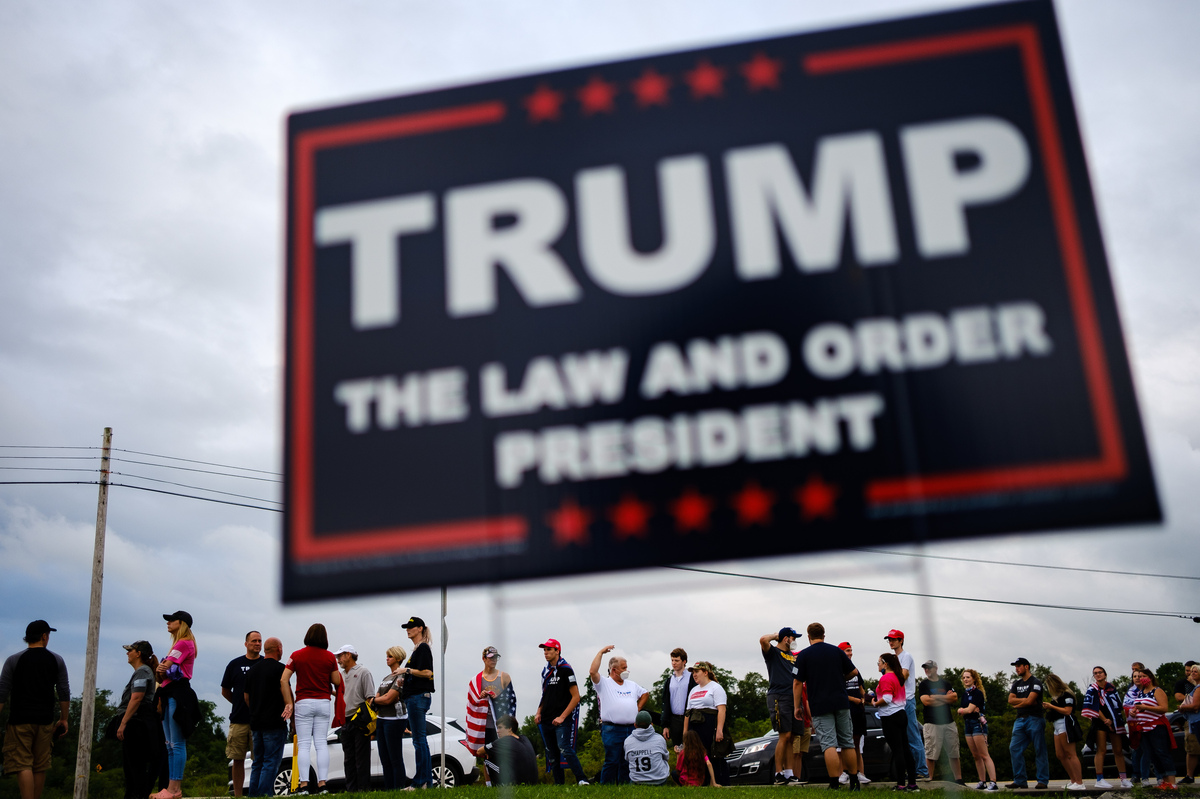 Supporters of President Trump line up outside of Arnold Palmer Regional Airport to get into a Sept. 3 rally in Latrobe, Pa.

The 2020 presidential campaign heads into the fall stretch with a dizzying pace of news developments threatening to upend the contest. But NPR interviews with voters across the country around Labor Day weekend found that most are locked into their support for either President Trump or Democratic nominee Joe Biden. The small contingent of undecided voters said they are unenthusiastic about their choices.

In a conventional presidential race, any one of the grave issues in the headlines now — the coronavirus pandemic and Trump's own words about the "deadly threat"; a battered economy leaving millions of people jobless and businesses shuttered; the debate about a vaccine; media reports on Trump's comments about service members; wildfires engulfing the West — could turn the race for one candidate.

The president's handling of the coronavirus remains the central factor in the campaign, and Democrats want to keep it that way. More than 190,000 Americans have now died from the virus.

National polls consistently show Biden with a lead, but the contest will come down to an electoral map that hinges on many of the same places that gave Trump the edge four years ago.

NPR's interviews found his harsh "law and order" rhetoric is resonating with some voters, and the fact that some unrest is happening in states that are competitive politically is causing both campaigns to ramp up attention and resources in those places. For those deciding to back Biden, meanwhile, the vote appears to be less about enthusiasm for him and more about getting rid of Trump.

Here is what NPR learned from conversations with voters in several key states:

The president's support is still strong in the rural communities where he surged in 2016.

NPR's Scott Detrow talked to Trump backers waiting to hear the president at his rally in Latrobe, Pa., last week. The president won that area by 30 percentage points in 2016, and the massive crowd that showed up for his event during the pandemic shows the deep support he still has from his loyal base.

Even one dairy farmer who acknowledged that Trump's trade policies didn't always benefit him personally told Detrow he was still all in for the president.

Another voter affected by the virus and who remains unemployed doesn't blame Trump.

"First off, has there ever been a pandemic to take over the world like this in such a short period of time? I think that Trump did the best that he could, considering the circumstances," Amy Taylor, a fitness instructor, told Detrow.

(These interviews with voters were conducted before the news broke that Trump told author Bob Woodward in February that the virus was "deadly stuff" and that in March, he said he deliberately "wanted to play it down" to avoid a panic.)

The president's focus on more rural areas may have limited yield. While his core voting bloc — white voters without a college degree — made up a large percentage of nonvoters in 2016 and could turn out in greater numbers this year, an analysis of census data by NPR and the Brookings Institution indicates that his base is shrinking. 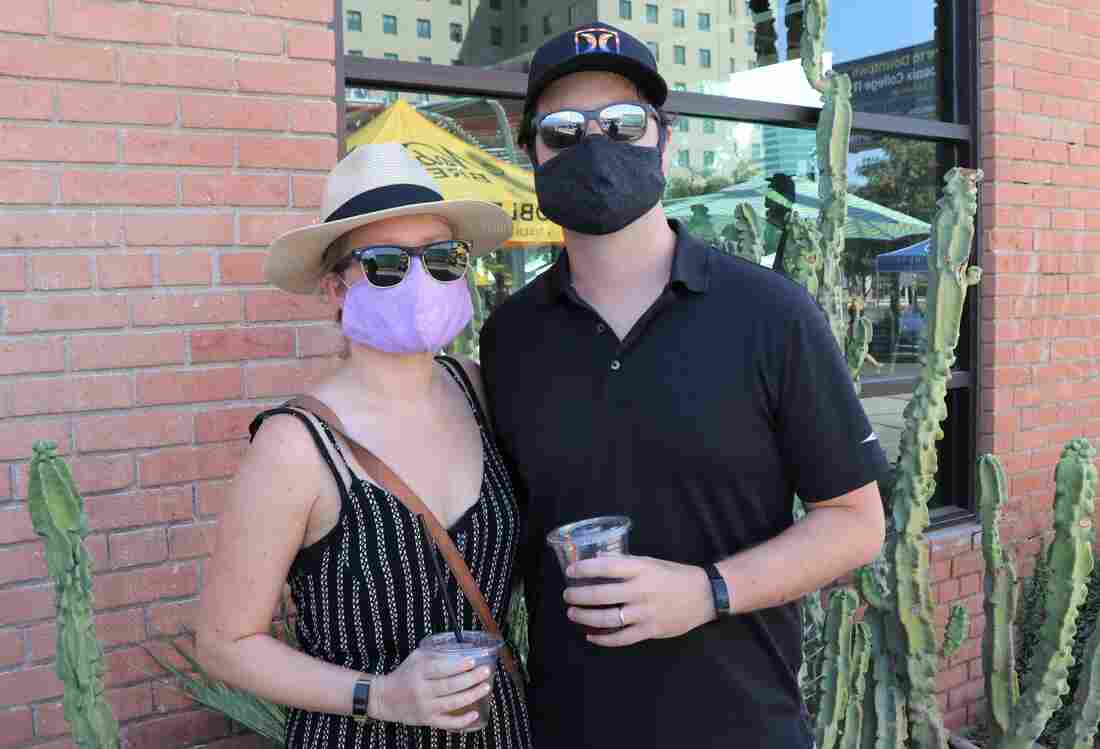 Kevin Wood and Rachael McDermott pose for a masked portrait at a farmer's market in Phoenix. Jimmy Jenkins/KJZZ hide caption

Arizona has been a solidly red state going back to the 1950s, and the last time it voted for a Democrat for president was 1996.

But Democrat Kyrsten Sinema won a tight Senate race in 2018, and the party sees an opportunity in 2020. The state has experienced an influx of retirees, but also includes more minority voters — especially Latino voters.

KJZZ's Jimmy Jenkins talked to voters at a farmer's market in Phoenix, where some undecided voters said they were not thrilled with their choices.

What Arizona Voters Think Of The Presidential Candidates

What Arizona Voters Think Of The Presidential Candidates

Kevin Wood told him, "I'm an independent, but this year, it's a clear choice. Gotta go one way, so we're gonna go the Biden way." He cited the Democrat's temperament as a key factor.

But the national attention on protests has Trump supporters who rallied for him at the state Capitol last weekend pledging to stick with him.

"He's my law-and-order president. That's who he is. And the other ones are for chaos and no order," Ralph Ruggiero, who was carrying a "Liberty or Death" sign, told Jenkins.

Young Texas voters not excited about either candidate 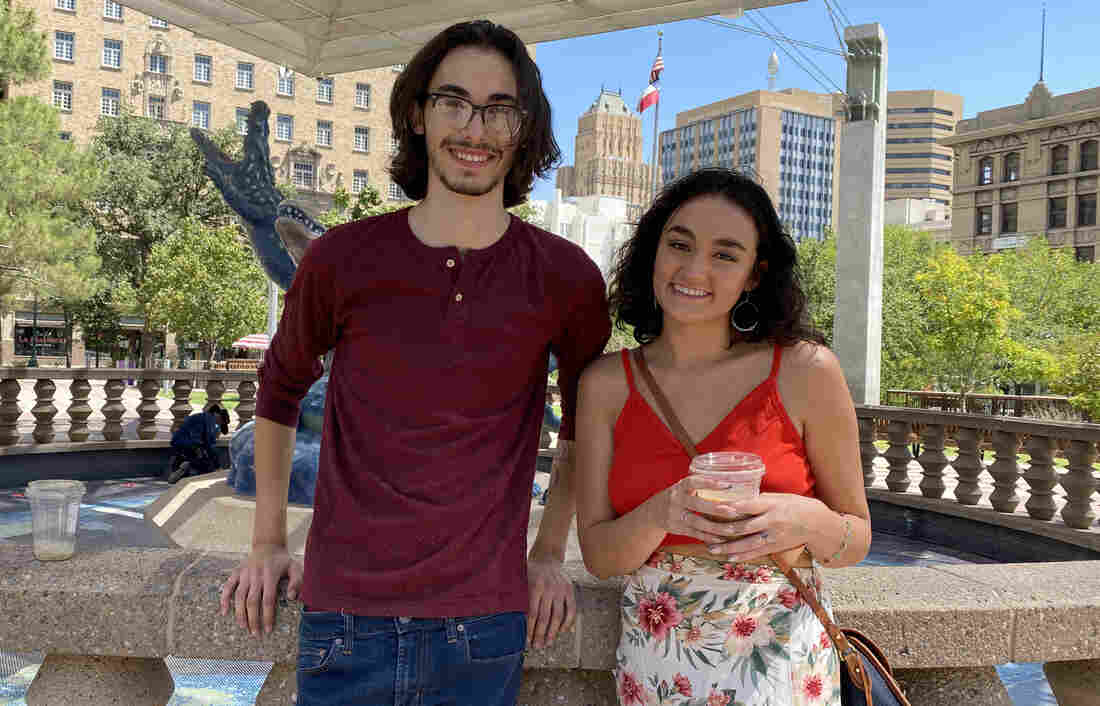 Texas is another reliably red state that some Democrats argue should be considered a swing state this year, with shifting demographics changing the electorate there.

Party members believe one factor that could make places like Texas competitive is their effort to pump up youth turnout — a bloc that tends to have the lowest turnout rate, but one that leans Democratic.

But Kocherga found younger voters in El Paso were split on whether their vote would even matter — a sign the party still has work to do.

David Ashcroft, a 21-year-old waiter, appeared repelled by both candidates. "It kind of makes me sick to my stomach just knowing that I put one of these people in office," he told Kocherga. "The best thing for me is just to not vote."

What's On The Minds Of Voters In El Paso, Texas

What's On The Minds Of Voters In El Paso, Texas

Amanda Kilcrease, a 20-year-old college student, said, "It just feels like if Trump wins again, like, then — and I didn't vote, I would have guilt with that, too, that I didn't take a small action that could have had an opposite outcome. But I'm also not happy with the outcome of Biden. I just want to stress that."

A "law and order" message in crucial Wisconsin

The killing of George Floyd by Minneapolis police in May triggered a national movement calling for racial justice. But the Trump campaign seized on the unrest — sometimes violent in several urban areas across the country — to argue that Democrats were soft on crime and that if Biden won, the threat against law enforcement would grow and spread to the suburbs.

The theme was prevalent throughout the Republican convention, with a focus on protests in Kenosha, Wis., following the police shooting of Jacob Blake, a Black man paralyzed after being shot multiple times in the back in late August.

The incident put the issue that the president has been focused on front and center in a state Trump won by less than 23,000 votes in 2016. Both the president and Biden visited Wisconsin last week — with very different messages. Trump lauded local law enforcement and highlighted local businesses damaged by riots. Biden met with Blake's family and called the president's rhetoric divisive, blaming him for further polarizing the country at a time when race relations are fragile. 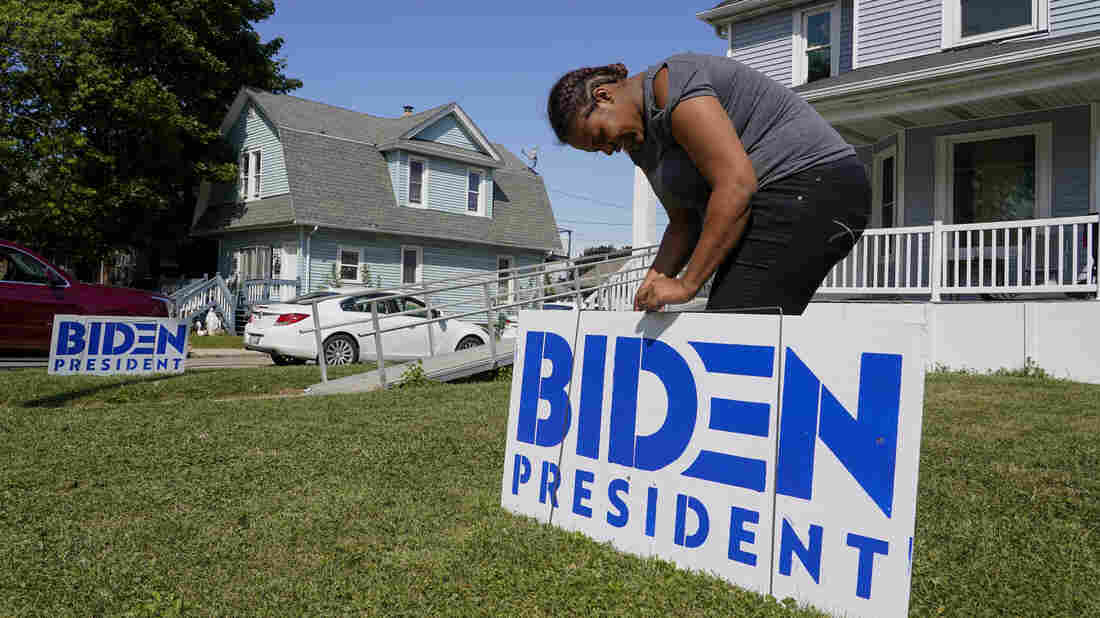 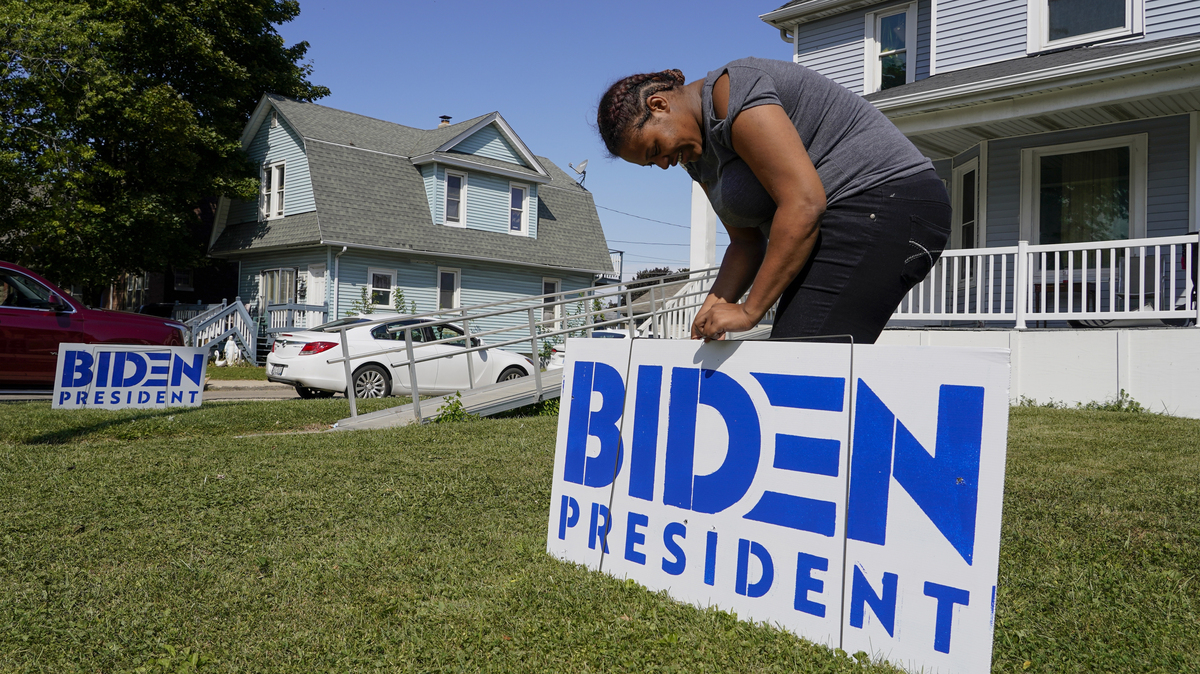 A resident of Kenosha, Wis., puts up a yard sign for Democratic presidential nominee Joe Biden on Sept. 3.

Maayan Silver, from WUWM, talked to voters in the area, many of whom suggested the back-and-forth over the issue was simply reinforcing their positions on the two candidates.

Jan Kaminski, one voter who didn't say which way she was planning to vote, said she watched the conventions and seemed more swayed by the GOP message.

"Well, there is something to be said when they say all these major — these cities that are having problems are run by Democrats. I didn't know that," Kaminski told Silver. "You know, you have to ... look what they did in Kenosha when the National Guard came in and enough backup came. You know, the rioting and all that stopped."

But one former supporter of Trump's who expressed concerns about looting and unrest in Wisconsin did tell Silver she couldn't back him again.

"He just wants people to riot. He instills riots and discord," said Karen Cayman, who lives in an area north of Milwaukee.

Like other key swing states, the effort by the Trump campaign to push up votes from rural parts of Wisconsin could help him again. But Democrats vow not to have a repeat of 2016, when turnout dropped in urban areas like Milwaukee and Madison, and Hillary Clinton's campaign appeared not to pay enough attention to the state. Additionally, activists — seeing an uptick in people coming out for demonstrations — vow that a focus on racial justice issues is motivating people not just to protest, but to vote.

Lauren Cross, involved in the Kenosha protests, told Silver about those on the streets: "I think, like, all the people out here are voting against Trump in some capacity."

Two Midwestern states give the campaigns reasons for hope

Michigan Swing Town Voters Share Their Thoughts On The Election

Michigan Swing Town Voters Share Their Thoughts On The Election

Both the president and Biden have visited Michigan in recent days, and the state was part of the "blue wall" of three Midwest states that flipped and supported Trump, handing him the White House in 2016.

WKAR's Abigail Censky visited one town, Williamston, that is competitive this time around and where there appears to be a split. Its congressional district backed Trump in 2016 but elected a Democrat, Elissa Slotkin, to Congress in 2018.

Todd Gardner said that there still is a lot of support for Trump, but that he's prepared to back "anybody but Donald Trump."

He's attracted to Biden's pitch to return to a high level of civil discourse.

"My hope is that the tone of the presidency can return to what used to be normal," he told Censky. "I think this has not been a normal four years of a president, and I really would like to get back to people not shouting at each other. I know we live in a divided nation, but it just seems he's made it more divided than it has to be." 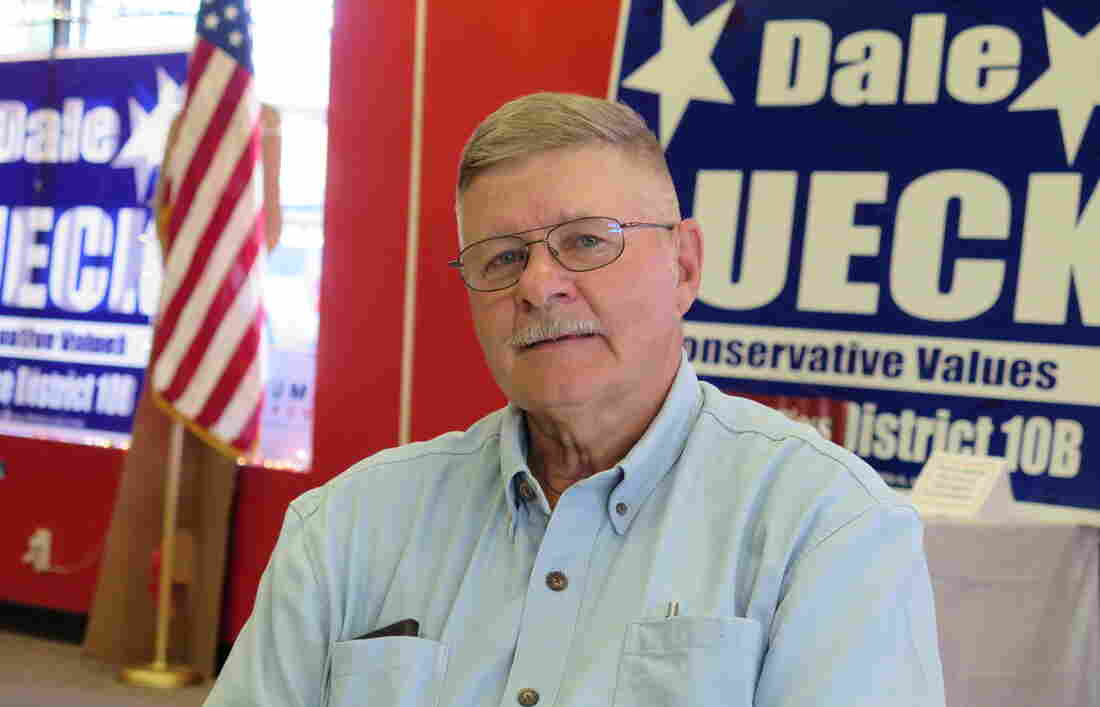 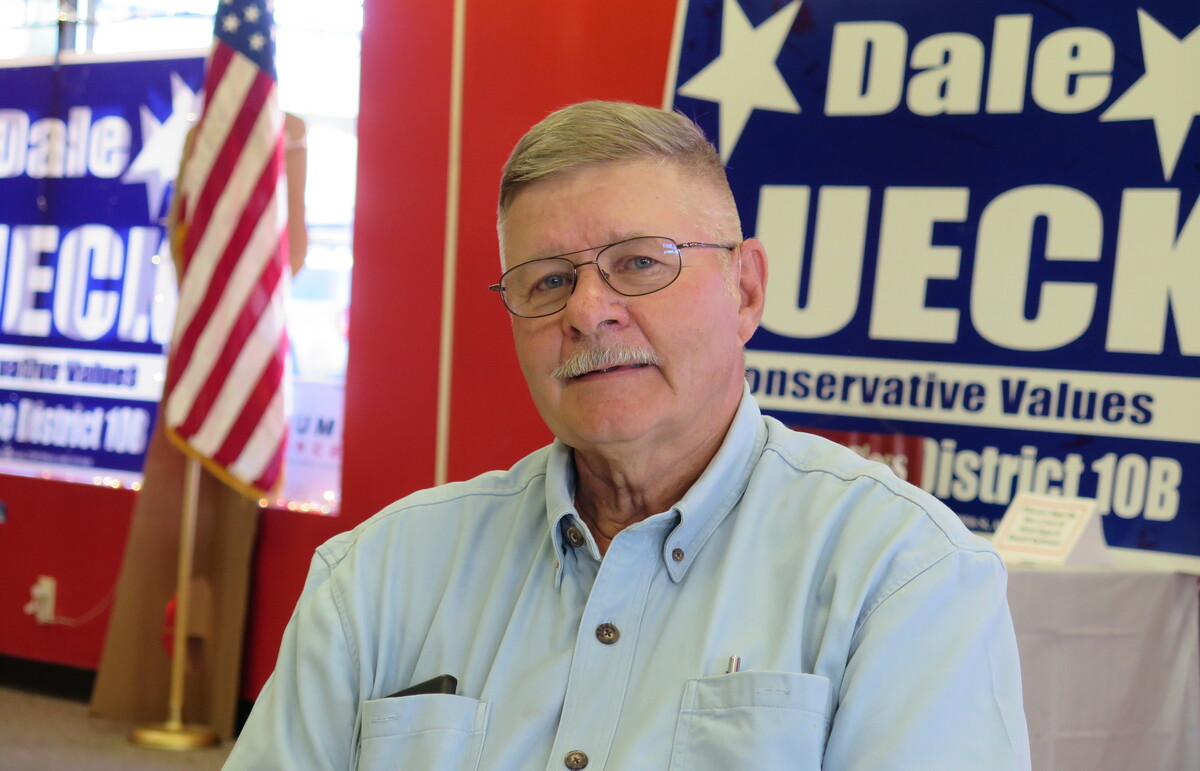 Minnesota voted for Clinton in 2016, but a combination of the reaction to the looting in Minneapolis and broader local economic issues are boosting GOP prospects in the state.

Minnesota Public Radio's Mark Zdechlik talked to Gretchen, a registered Democrat in Aitken, a rural town in the northern part of the state. She declined to give her last name because of concerns about the impact on her business, but she said she is disillusioned by Democrats now, pointing to unrest in Minneapolis earlier this year and in other cities, and said even though she backed Clinton four years ago, she cannot get behind Biden.

"The Republican Party is kind of speaking to my heart more than the Democrats so I think I'm going to have to vote Trump this time," Gretchen said.

While Gretchen was among a small group of voters who were moving to a new party in 2020, many voters whom NPR and station reporters talked to had strong feelings about why they were sticking with their preferred candidate.

Sheri Holman, a Michigan union member who is among a bloc in the state who abandoned Democrats for Trump in 2016, is sticking with the president, even though she admits she doesn't like him personally.

But she isn't convinced that after Election Day the country will move past the intense partisan split.

"I'm sure there'll be riots no matter which way it goes," she says.