Accessibility links
Wildfire Preparation For The California And Oregon Wildfires : Life Kit Wildfires are raging in California and the Pacific Northwest. Here's how to prepare for a wildfire and what to do if one is approaching. 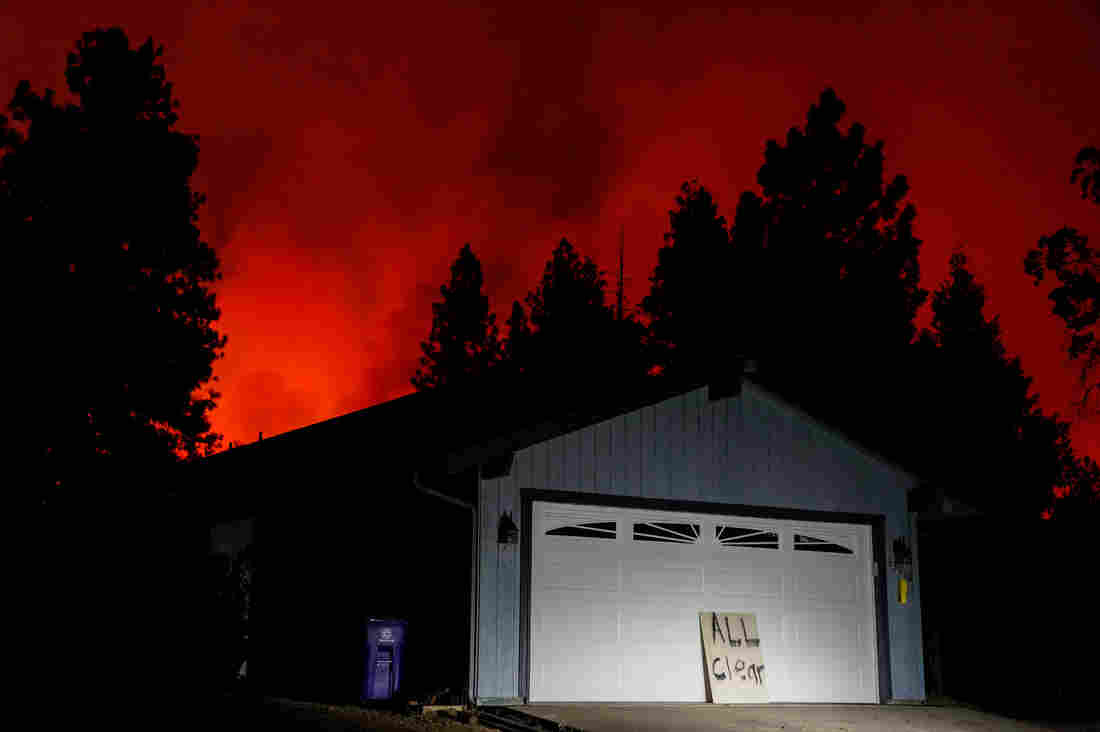 An "All Clear" sign stands in front of a house as the Creek Fire creeps up in Auberry, Calif. on Sept. 8. Kent Nishimura/Los Angeles Times/Getty Images hide caption 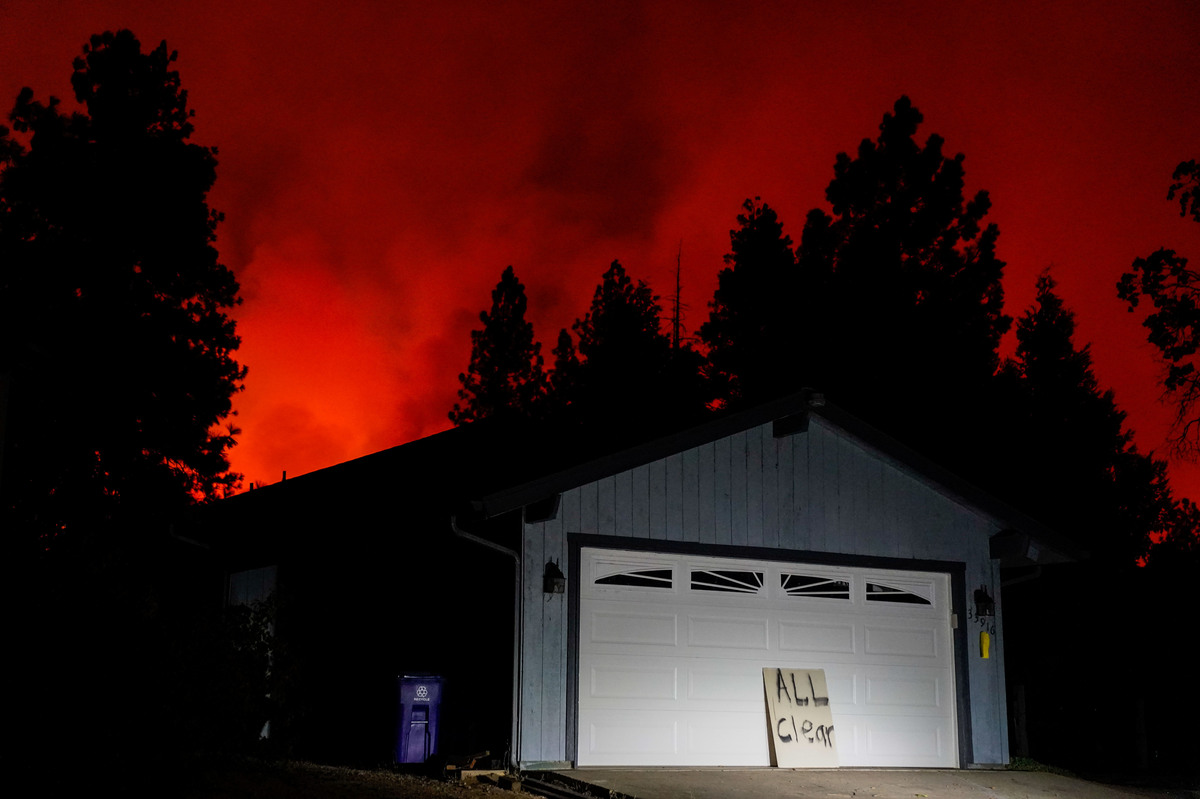 An "All Clear" sign stands in front of a house as the Creek Fire creeps up in Auberry, Calif. on Sept. 8.

So far this year in California, wildfires have consumed over 3 million acres statewide — more than in any other year on record, according to Cal Fire. Hundreds of thousands of acres are also burning in Oregon and Washington, and the worst part of the fire season is still a couple of weeks away.

Fire expert Porfirio Chavarria says safely living in or visiting the Western U.S. includes knowing how to evacuate from wildfires and knowing what to do if you get trapped.

Chavarria specializes in the intersection of wildlands and communities at the Santa Fe Fire Department in New Mexico.

Wildfire safety, he says, starts with preparation well before you smell smoke. He offers these six takeaways to get you started.

At Least 35 Dead As Wildfires Rampage Along The West Coast

Start by signing up all family members for emergency alerts on their mobile phones. Local emergency agencies send loud warnings and an explanatory text message with the approach of a life-threatening emergency.

"That's one of the easiest things to do," Chavarria says.

Next, consider the various evacuation routes out of your community. The best route will depend on the fire's direction and your location. And remember, wildfire smoke can turn day to night and blind you to familiar landmarks. Evacuating early is preferable to waiting until things get out of hand, he says. That's especially true when you're evacuating elderly family members, children, pets or livestock. 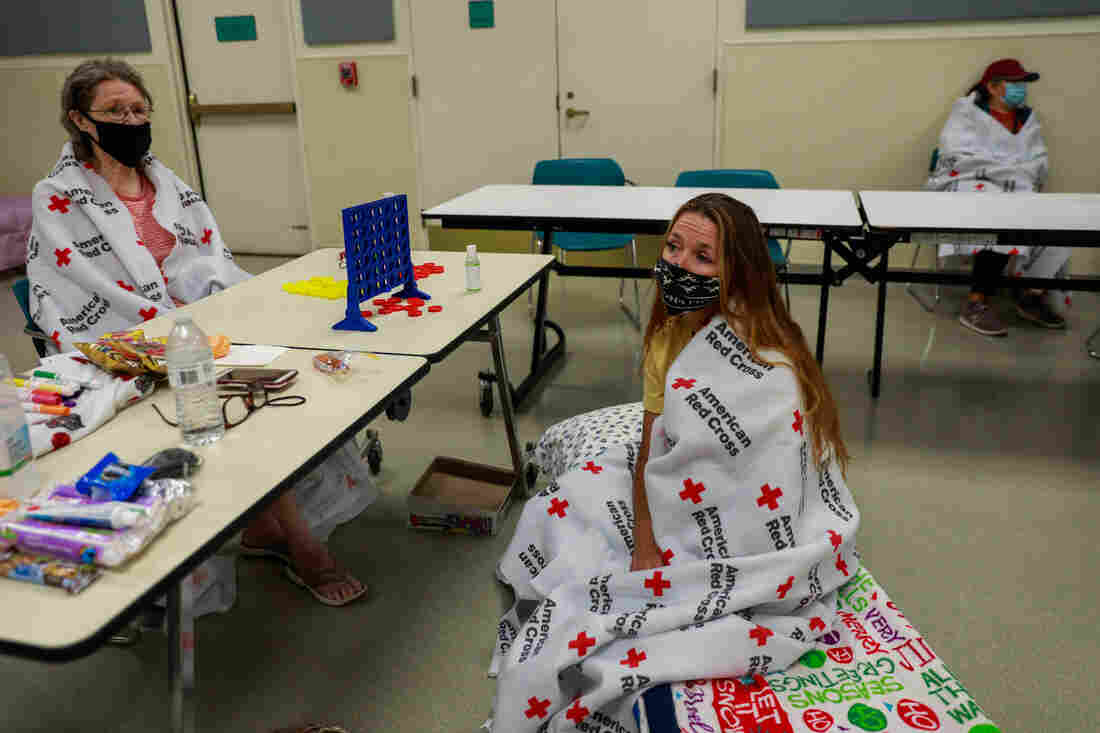 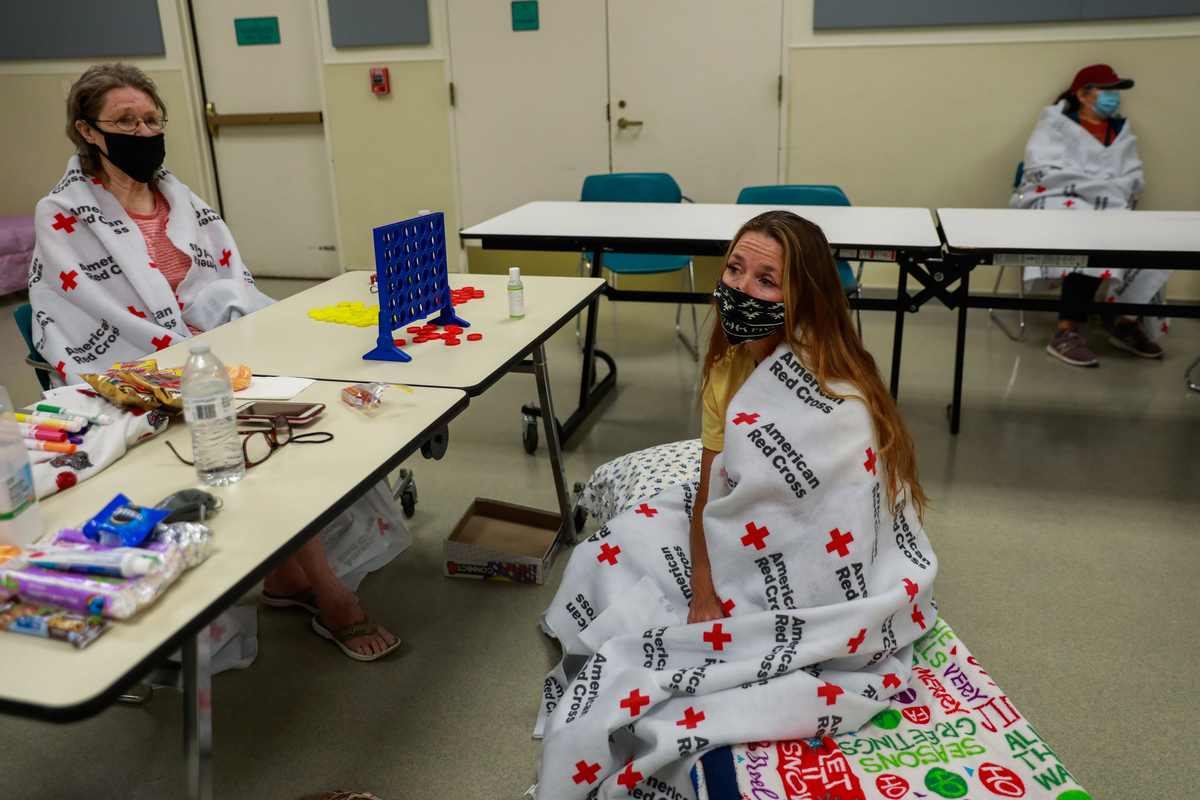 All family members should have their own emergency kits containing up to three days of supplies, Chavarria says. Among the items to pack: food, water, medicine, clothing, N95 masks, cash and other essentials.

"If you have pets with you," Chavarria says, "you're going to want all the stuff that your pets need."

Here's a checklist for your kit.

Wildfire evacuees often lament that as they raced out the door, they forgot to take irreplaceable items and instead grabbed whatever was closest to them. Chavarria says you can avoid this by making a list of the things you'll want to take with you in an evacuation. If possible, pack them up ahead of time in a suitcase or backpack.

First in the bag: irreplaceable keepsakes, family photo albums — whatever is near and dear to your heart. Include important documents, such as passports and home insurance papers. And be sure to pack your computer, hard drives and whatever else you need for work and communication.

Chavarria says if it isn't realistic to keep these items permanently packed in a go bag year-round, you can instead create a list of the items you'll want to take with you and stick that in a designated backpack or suitcase. That way, if authorities issue evacuation orders, you can efficiently round up the things you most want to save rather than hope your memory will serve you as you scramble to safety.

"Hardening your home is really trying to make it safe from those embers and resistant to those flames," Chavarria says.

The big-ticket items that make your house most vulnerable to fire include wood-shingle roofs, wooden decks and fences, and single-pane windows. Chavarria says that whenever possible for you to do so, trade these fire-susceptible items for those made from fire-resistant materials. Tile or composite roof shingles, he says, along with eco-friendly composite decking and fencing materials and dual-pane windows, will better protect your home.

Chavarria acknowledges that retrofitting a house is expensive. "But there are some really easy things that are really inexpensive to do every year," he says.

Immediate, low-cost home hardening includes covering vent openings with small-gauge metal mesh to keep embers from starting a fire in your attic or under your house. And, he says, keep your roof and rain gutters free of pine needles and leaves.

If a wildfire threatens, especially on those hot, dry and windy days, bring flammable patio cushions inside the house. Close all windows and doors if you evacuate, and, Chavarria says, leave your porch light on so firefighters can see your home at night or through thick smoke. 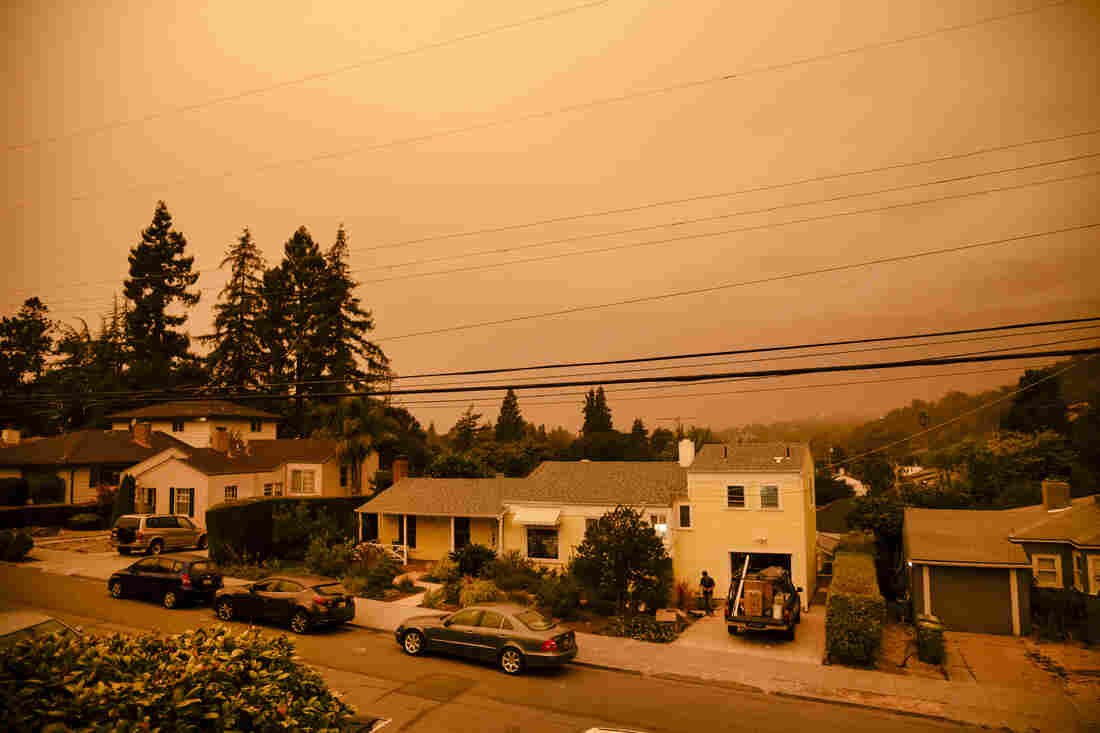 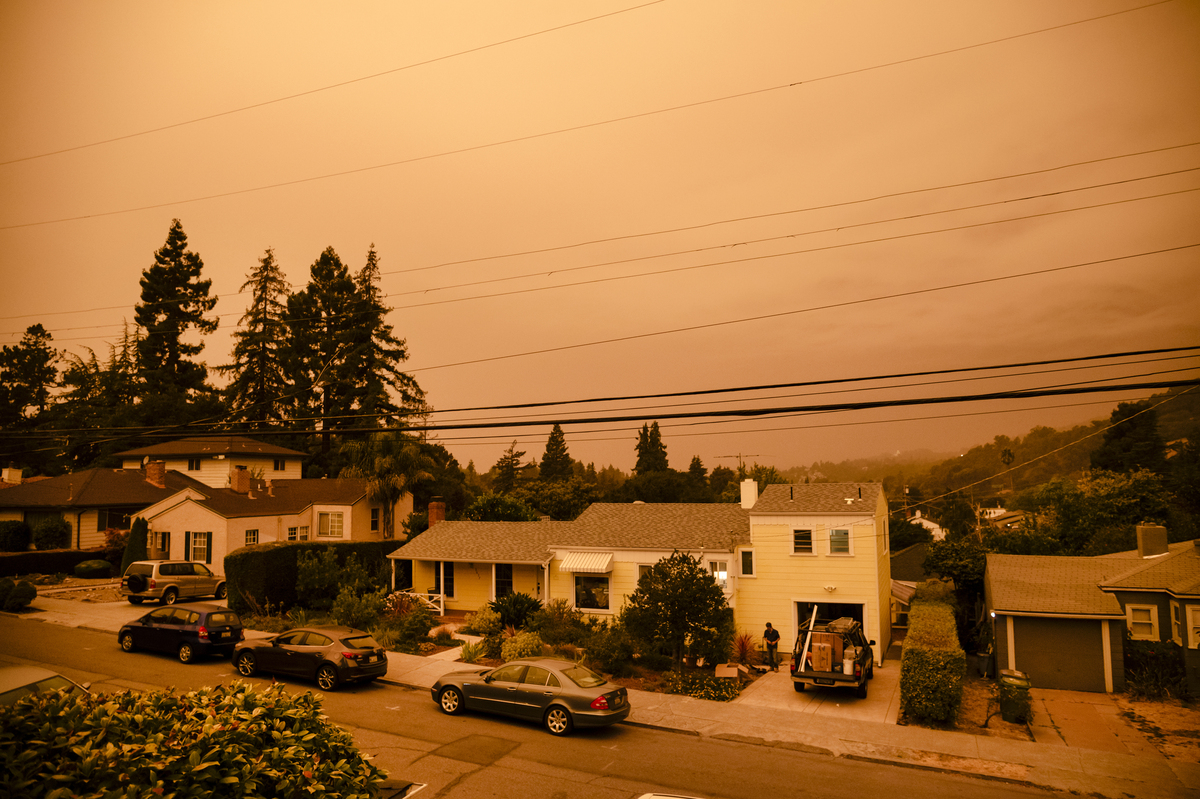 Smoke fills the air over homes in Oakland, Calif., on Sept. 9.

5. Create a fire buffer around your house.

The goal here is to slow or stop a wildfire before it reaches your house. Do this by clearing away pine needles, dry weeds or plants, mulch, stacks of firewood — anything flammable that's within 5 feet of your home. Then, up to 100 feet out, you'll want to make it harder for flames to jump from plant to plant and from tree to tree by breaking up the continuity of your landscaping.

"Think of fire as a series of ignitions." Chavarria says. "So you want to break up the vegetation ... so that if a tree starts on fire, it's not going to start the next tree on fire."

He also suggests trimming up tree canopies to about a third of the height of the tree, so flames can't easily reach the branches. Then clear out dead or dry brush on the property.

What Questions Do You Have About Voting In The 2020 Election?

6. Know what to do if you get trapped.

Most of the time, you'll have plenty of warning before a wildfire hits. The National Weather Service issues red flag warnings when fire conditions are present. This is a good time to review your wildfire action plan, fill the car with gas and leave it parked on your driveway, with front pointed toward the street for faster exit.

Still, in fast-moving firestorms, you and your loved ones may become trapped in a car, in a house or on foot and be unable to escape the flames.

The first thing to know, Chavarria says, is that the main flame fronts move through areas fairly quickly — typically in about 90 seconds.

If you're in a car or inside a home or building that's not on fire, stay there. "You're always safer inside away from the flames than you are outside, exposed to everything the fire is going to bring," Chavarria says.

If you're in your car while stuck in evacuation gridlock, close windows and vents, and keep your car running with the air conditioner on in recirculation mode. Get onto the floorboards and cover yourself with a wool or other blanket.

If you're trapped in your home, close all windows and doors. Then push potentially flammable furniture, such as couches and chairs, into the center of the room away from the windows. Chavarria also suggests filling the bathtub and sinks with water in case you lose water in the fire, which often happens. That way you'll have a drinking supply. As the flames pass through, get on the floor and cover yourself as you would in your car.

If you're outside, find a ditch or depression and lie in it, covering yourself with blankets or any material you may have. In all instances, cover your nose and mouth with a dry material. Wet materials can quickly turn any moisture into hot steam that can harm your lungs.

Stephanie O'Neill's reporting is supported through a journalism fellowship at the Natural Hazards Center at the University of Colorado Boulder, funded by Direct Relief, a nonprofit humanitarian aid organization.

The podcast portion of this story was produced by Clare Marie Schneider.