Accessibility links
Will 2020 Be The Year Of The Young Voter? For decades, turnout among young voters has trailed far behind that of older voters. But could renewed efforts to reach this demographic result in record-level turnouts? 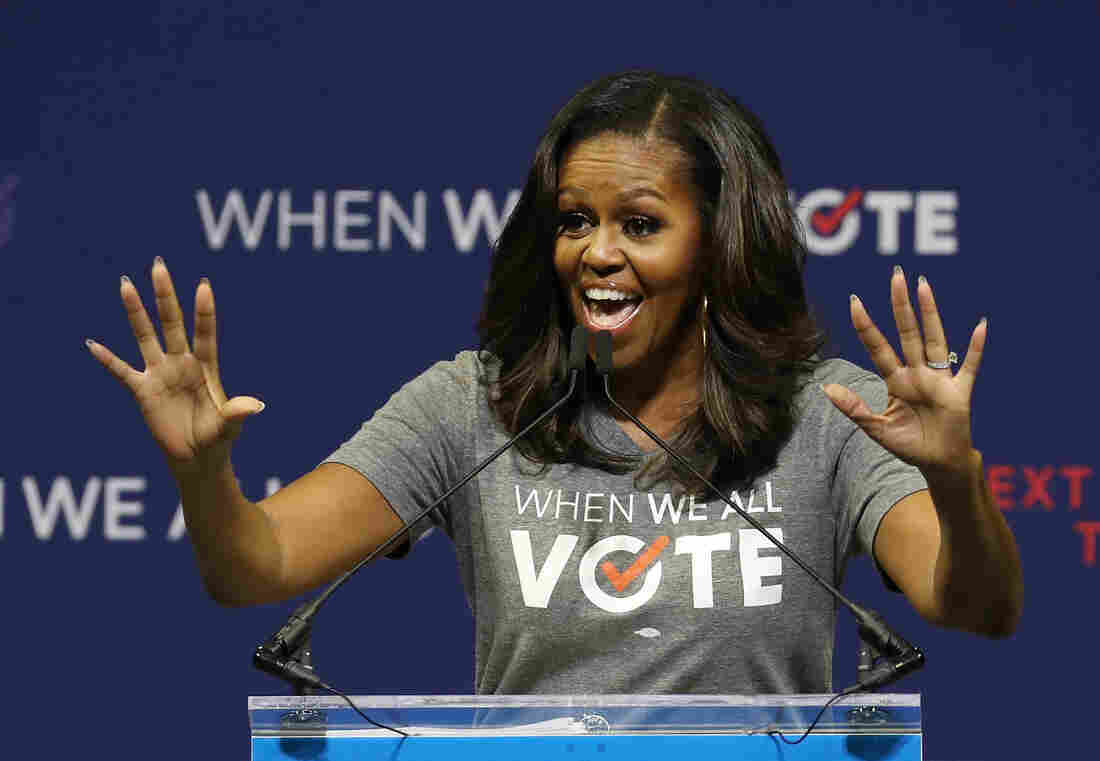 Former first lady Michelle Obama, seen here at a rally in 2018, is the founder of When We All Vote, an organization that aims to help people register and vote. Joe Raedle/Getty Images hide caption 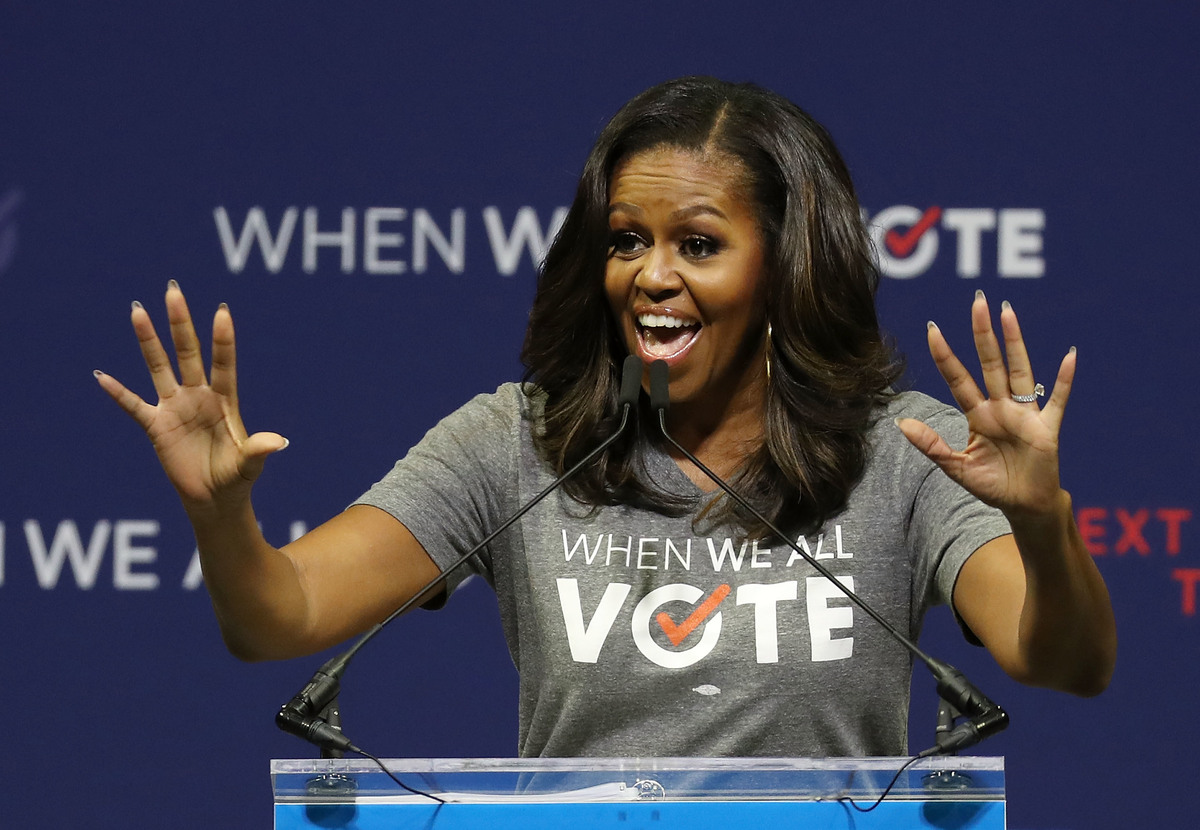 Former first lady Michelle Obama, seen here at a rally in 2018, is the founder of When We All Vote, an organization that aims to help people register and vote.

For Camilo Villa, a sophomore at Providence College, and his peers, there's one issue that keeps coming up: getting ready to vote.

"It's an icebreaker. 'Are you registered? Are you voting? Who are you voting for?' " he describes. "We finally get to perform our first real adult civic duty. It's like — I'm a big boy now, I get to go out and vote for what I believe in."

But Villa thinks this could be the year that trend is reversed.

"It's up to us, the younger people, to step up and prove them wrong and sway this election in a way that they're not expecting," he says.

Young people could wield significant political power: Millennials and some members of Gen Z comprise 37% of eligible voters, roughly the same share of the electorate that baby boomers and pre-boomers make up, according to census data analyzed by the Brookings Institution.

But for decades, youth voters have showed up to the polls at low rates.

When We All Vote, a nonpartisan nonprofit launched in 2018 by former first lady Michelle Obama, is one group working to bridge the gap.

"Young people are a very powerful bloc of voters and they could really change the course of this country if they all voted," says Stephanie Young, the group's chief officer for communications, culture and media partnership.

She stresses the need to engage young people in places they're spending time, like popular blogs and social media. To that end, Obama recently hosted a private call with online influencers, urging them to use their platforms for civics.

"They literally could be the only person that talks about voting in someone's life," Young says. "Yes, do your makeup tutorials. Yes, critique the latest reality show. Do all of the stuff that you do every day on your social media, but take time to talk about voting."

The organization also created My School Votes, an effort to build registration programs in high schools, where students can take the lead.

That includes Gabrielle Forbes, a senior in Miami who's registering peers, despite being too young to vote herself this fall.

"It's just really refreshing to know I don't have to wait 'til I'm 'an adult' to encourage people to vote," she says.

One of her jobs was piloting a new messaging campaign.

"We'll send our registration links and talk to people our age," Forbes says. "Just catalyzing that conversation with someone saying, 'What matters to you? What do you want to see in the future? You have the opportunity to create that reality.' "

Each registration link is tied to a volunteer's portal, so students can track how many people they've personally helped register.

The campaign has sent over 90,000 direct messages and over 5 million texts to eligible voters.

Traditional outreach is still taking place, despite complications from the coronavirus pandemic.

"When I leave home, I make sure I have my mask, my hand sanitizer and my flyers," Caprecia Miller says.

Miller, 49, has been volunteering with When We All Vote for months and says she tries to find creative ways to reach young people. 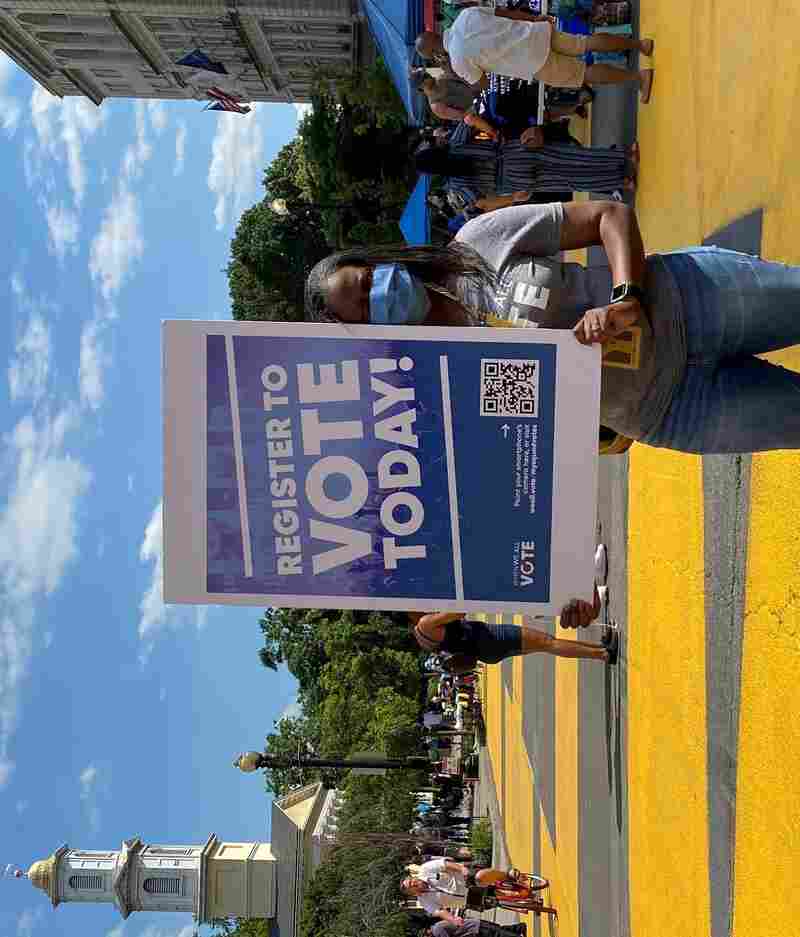 Caprecia Miller is a voting squad captain with When We All Vote and is working to register people ahead of the election. Courtesy of Caprecia Miller hide caption 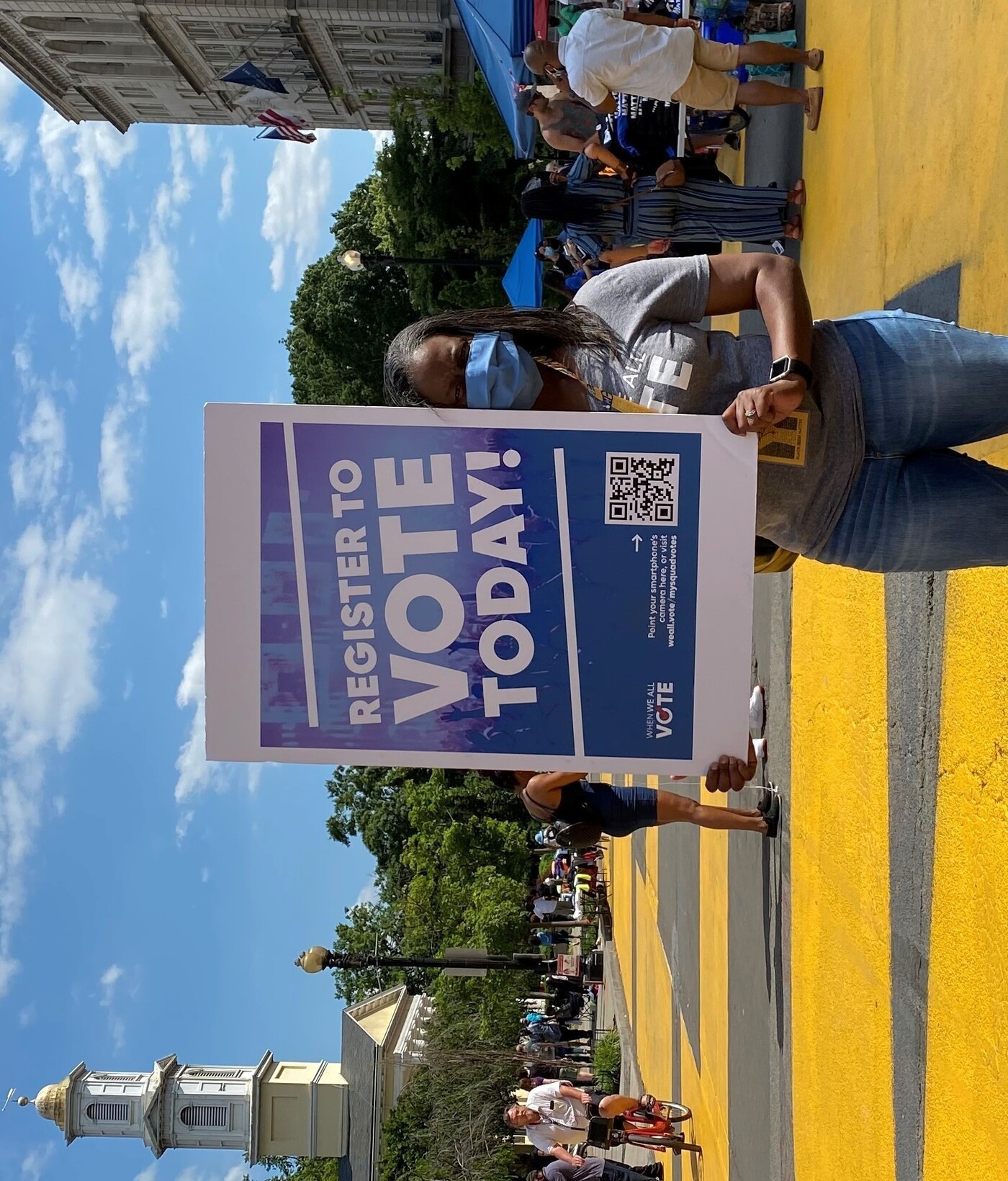 Caprecia Miller is a voting squad captain with When We All Vote and is working to register people ahead of the election.

"If this generation is voting, they're going to teach their children the importance of voting. It definitely will be a positive trickling effect for years to come."

Young says 2020 is uniquely poised to be a turning point for young people participating in the electoral process.

"Because of COVID-19, because of the civil unrest that we're seeing, the continual police violence, all of these things that are happening right now, this is creating a little bit of a perfect storm to harness a new generation of Americans who are going to be interested in what's happening in their communities," she says.

Sunshine Hillygus, a professor at Duke University, says energy around protests in 2018 may have accounted for a jump in youth turnout in the midterm elections.

"There was a lot of youth activism around the Parkland mass shooting. There were headlines saying young people were more energized than ever before," she explains. "And there were unprecedented levels of turnout. But it's worth remembering that unprecedented surge was an increase from like 20% turnout to something like 30% turnout. It's still just a really low level of participation."

"That's, in fact, not true. Young people are very interested in politics. They have high levels of the civic precursors of participation. The real problem is they don't follow through on their civic intentions," she says.

Hillygus co-authored Making Young Voters, which looks at why that's the case.

She found young people can get overwhelmed by processes like registration, an additional step in most states that can feel like an obstacle.

Hillygus says young people also hold themselves to a high standard when it comes to casting their ballots.

"We often had young people admit that they wanted to vote, planned to vote, but felt they weren't informed enough to be a good voter," she says. "Older people will say, no, you should vote, even if you're not terribly informed. And there's a massive gap in the expectations about what is required to be a good citizen."

A bevy of groups like When We All Vote — both partisan and nonpartisan — are working to register new voters. Most feature celebrities, who have become a staple for get out the vote efforts.

"Just Vote," a newly announced campaign by Global Citizen and HeadCount, offers new voters the chance to win luxe items from their favorite celebrities, like a signed guitar by Taylor Swift or a virtual dance lesson with Usher.

When We All Vote also has star-studded support, including Meghan Markle and the cast of The West Wing.

As part of its outreach efforts, the nonprofit teamed up with Community, a text messaging platform, in which celebrities like Kerry Washington and the Jonas Brothers send messages to voters on their 18th birthday, reminding them to register to vote. 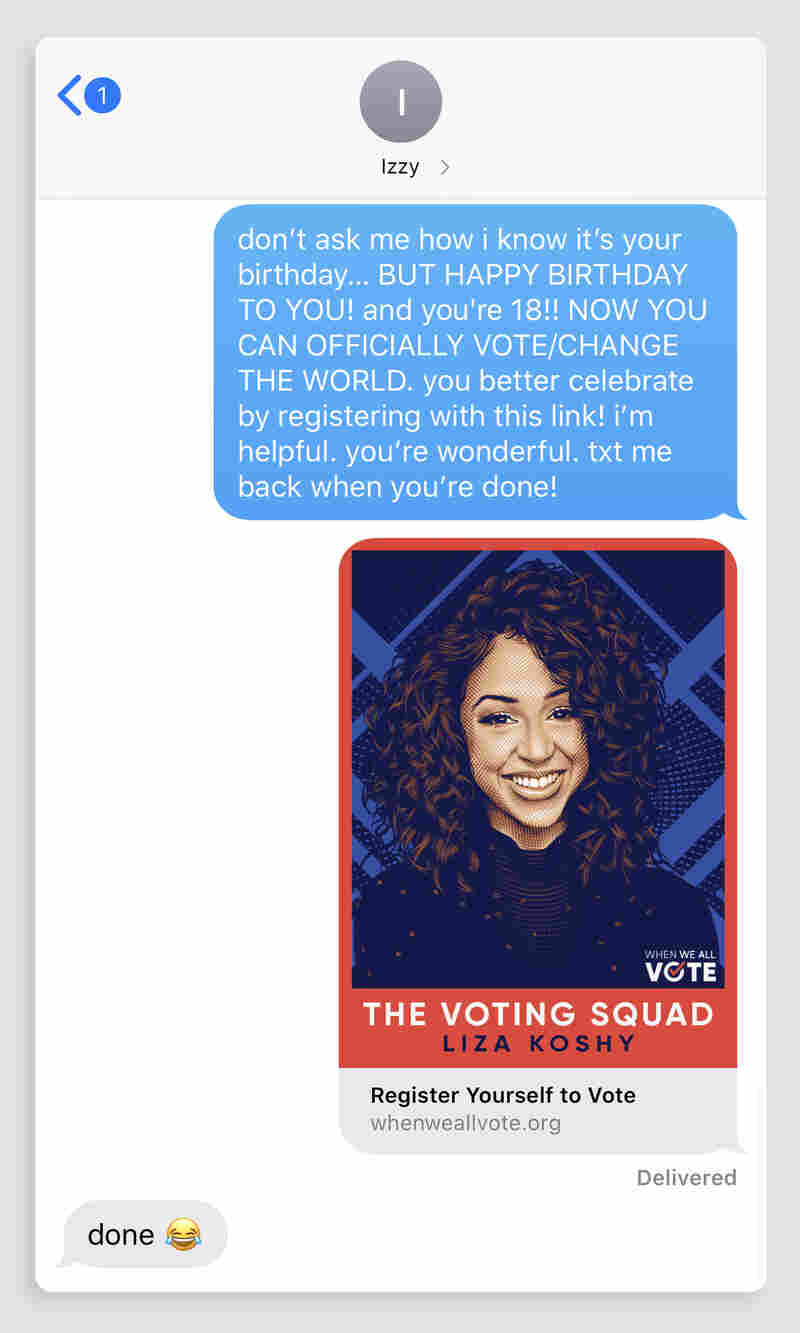 toggle caption
Courtesy of When We All Vote 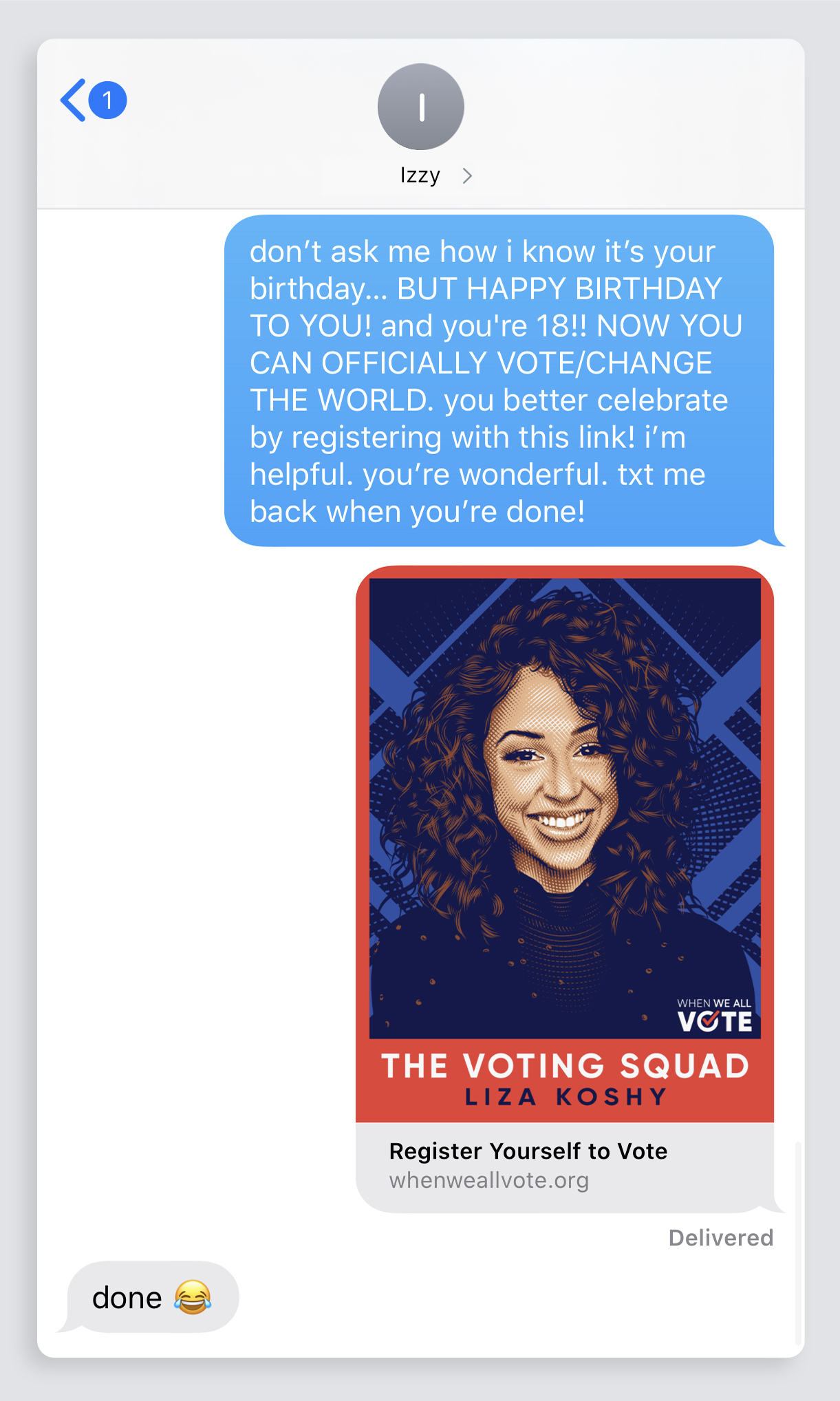 As an outreach effort, When We All Vote teamed up with a text messaging platform to remind young voters to register.

Courtesy of When We All Vote

But Hillygus says it's not the presence of celebrities that's truly impactful but what information they're providing.

Hillygus says programs like same-day registration and pre-registration for 16- and 17-year-olds can substantially boost youth turnout.

But to truly increase turnout among young people, she argues education in the U.S. has to shift from "bubble sheet" civics to practical civics.

Those are the questions advocates hope to help young people answer now that the first absentee ballots are already going out in the mail.