Accessibility links
Review: The Fury Of 'Coastal Elites' Is Hit And Miss Paul Rudnick's HBO film features several fine actors in an uneven set of monologues about Donald Trump, the pandemic, and where we go from here. 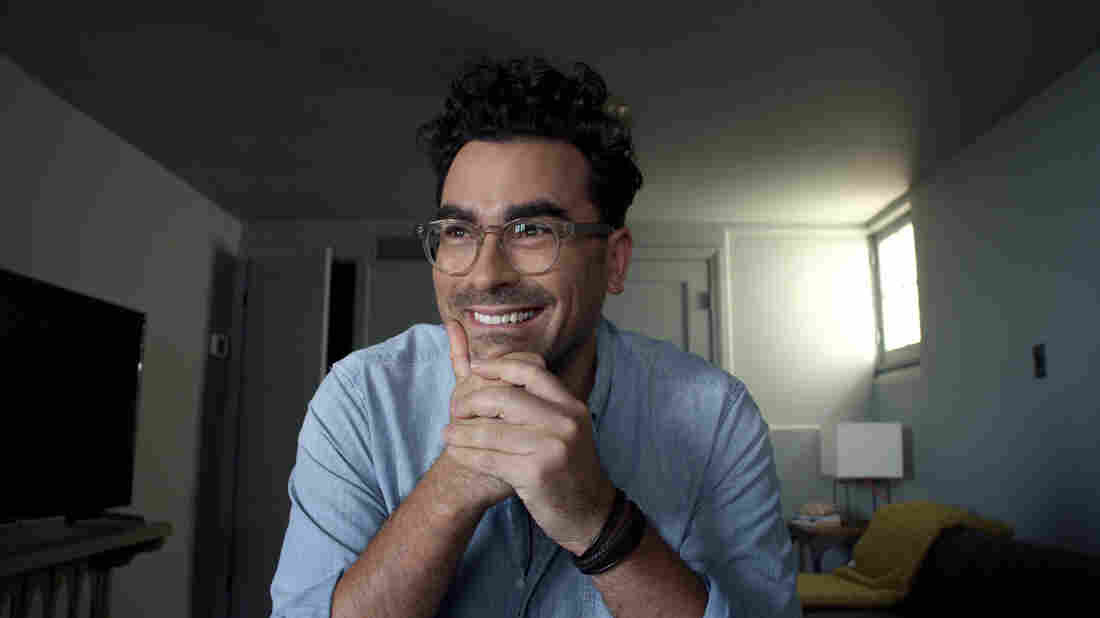 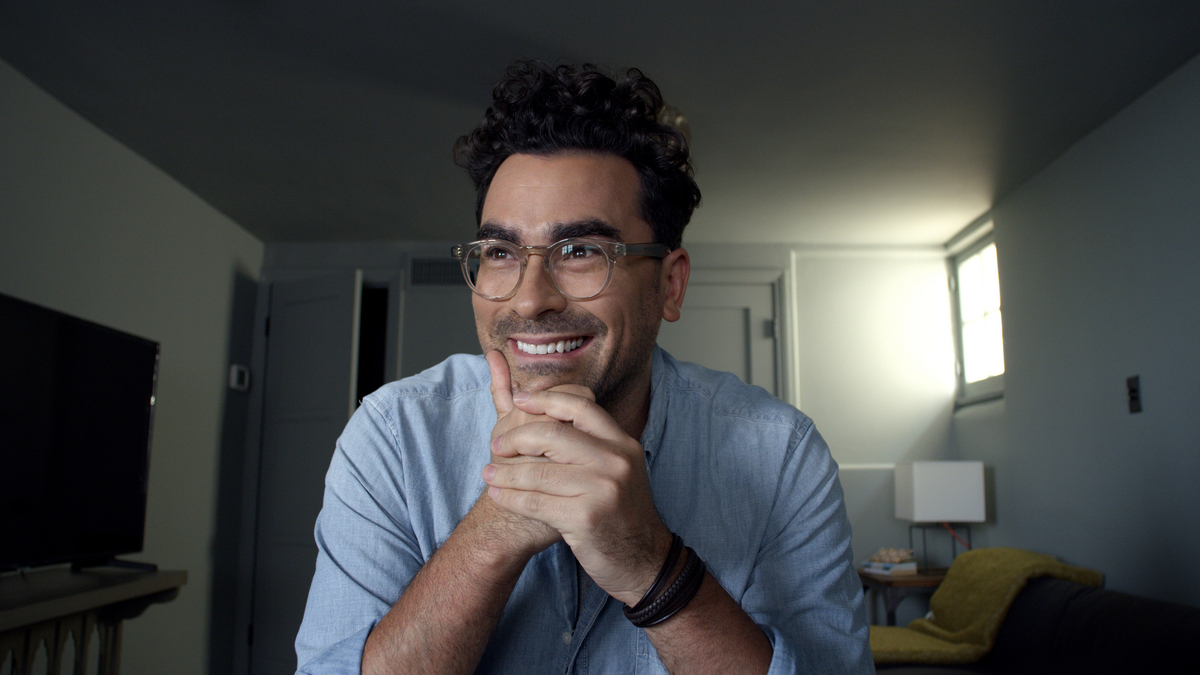 Dan Levy performs the most effective of the five monologues in HBO's Coastal Elites.

One of the things we're still learning about the pandemic we're enduring is what art will come from it. That's for a few reasons: the emotions it produces can crowd out others, the political moment crisscrosses with and complicates it, and logistically, any art that requires gathering, of artists or audiences or both, is too dangerous to undertake in many places. It's not clear how long those things will be true.

Coastal Elites, a film that premieres Saturday night on HBO, is an early effort to bluntly confront these realities. It is an explosion of emotion about life in 2020, told in five monologues filmed during quarantine. The opening title card repeatedly crosses out subtitles and replaces them with new ones. "Five heart-tugging monologues." Strike that. "Five unhinged rants." Strike that. Finally, we settle on something: "Five desperate confessions from people barely coping with the new abnormal." And in those confessions, there's anger, there's exhaustion, there's disbelief, there's frustration. Much of it is directed at the current president — most of it is — but some of it is just grief over our escalating series of miserable circumstances. Written by Paul Rudnick, the playwright and screenwriter who wrote Jeffrey, In & Out and many very funny columns under the pseudonym Libby Gelman-Waxner, it blends all that anger and frustration with a lot of comedy, more in some segments than others.

The monologues are all performed by well-established actors. Bette Midler plays a woman being questioned in a police station who brings a very specific New Yorker's eye to her distaste for Donald Trump. Dan Levy plays a gay actor named Mark, who's talking to his therapist about his audition to play a gay superhero and how it has him thinking about his identity and the compromises he is and isn't willing to make. Issa Rae is a wealthy young woman named Callie chatting with a friend. Callie remembers knowing Ivanka Trump in school and is startled to have heard from her again. Sarah Paulson plays a meditation guru named Clarissa whose latest video becomes a discussion about a visit to her family of Trump supporters. And Kaitlyn Dever plays an exhausted nurse who's come to New York to help out in the early days of the pandemic, who's keeping a video diary.

Paul Rudnick On His 'Gorgeous' Adventure

As with most assemblages of separate pieces, Coastal Elites has the blessing and the curse of severability. They're quite uneven, as it turns out. Of the five, two — Levy's and Dever's — are excellent. Midler's is okay. The other two are less successful, but for different reasons. Rae's character doesn't get many good jokes, and her story is centered on the least crisply defined character. Paulson's is too broad, never seeming like a monologue at all, but more like a list of authorial announcements. And Midler's, while elements of it are successful, is centered around the retelling of an implausible anecdote that lacks the ring of truth contained in the things she says about the way she feels.

It's probably not a coincidence that the two that are most dramatically effective spend the least time directly discussing specific politicians and their associates. Particularly because the format feels perilously close to listening to speeches, the more overt the politics become, the less interesting the characters become and the less effective the jokes are. You learn a lot about who Miriam (Midler's character) is when she talks rapturously about her attachment to The New York Times and says, "Reading the Times online is like having sex with a robot. I mean, it's cleaner and it's faster, but you can tell the difference. I'll just say it: The New York Times online is The New York Times for the Gentiles." (There is also a description of Jared Kushner that is perhaps the most Paul Rudnickian line of the entire thing, which I will not spoil.) You learn less when she's reciting the details of the sexual assault allegations against the president and the reactions to them that his daughter, in real life, has offered. Those are the moments when the piece feels the most familiar and, honestly, the most unnecessary. Not because those facts aren't important, but because repeating them in monologues doesn't really place them in any particular additional context that's useful. The audience for this film is mostly people who share the anger of its characters; it doesn't feel likely that information recitations will be meaningful to them.

It made me think of this: I remember talking to my mother about M*A*S*H when I was very young. I'd seen it on TV some, but I was really too little to get much out of it. I did, however, know about the Vietnam War, and I think I assumed everything that was about war and felt vaguely contemporary was about Vietnam. I remember when I realized this was about the Korean War, and I clarified with my mom. She explained to me that it was about Korea, but really, in another way, it was about Vietnam. What something is literally about isn't always what it's actually about — it was one of my first conversations about subtext, I suppose. The parts of Coastal Elites that aren't quite as literal in their messaging are more effective.

Political art benefits from some kind of distance. When you're right in the middle of an election involving a current president, having characters talk about how much they can't stand him is too close to repeats of conversations already going on in real life. What art often does well is approach public fury at an angle, excavating it through individual stories that feel deeply human, or through dark humor, or through metaphor. And sometimes, Coastal Elites achieves that. But the sections that work the best are the ones that contain the sharpest character portraits, not the ones that contain the most scathing political commentary.

Where it works best is in moments that illuminate political questions, but don't just give you a character talking about politics and politicians. Levy is wonderful in a sequence where he talks about Mark's passion for comics and the gay characters he's asked to interpret. ("I just booked a commercial where my boyfriend and I go on a picnic because we both have health insurance.") But when Paulson's character details her father's feelings about John McCain, it just kind of sits on the screen.

It's worth a watch for the parts that work well, and for Rudnick's unique way with a quip. This kind of art, bent to the demands of quarantine filming, is still young. May it have the least possible chance to mature.