Accessibility links
On Coronavirus, Trump Says He Wanted Calm. That's Not Typical President Trump is known for wielding fear as a political weapon. But on the coronavirus, he says he wanted to "play it down." 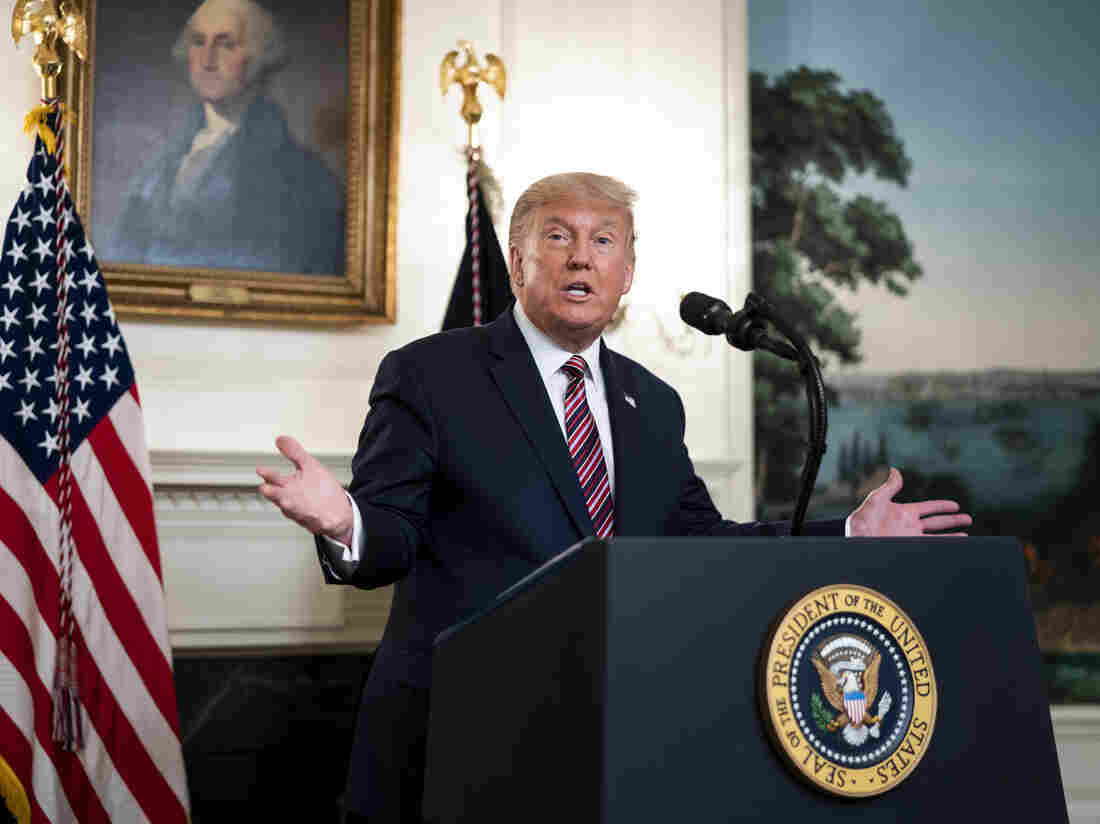 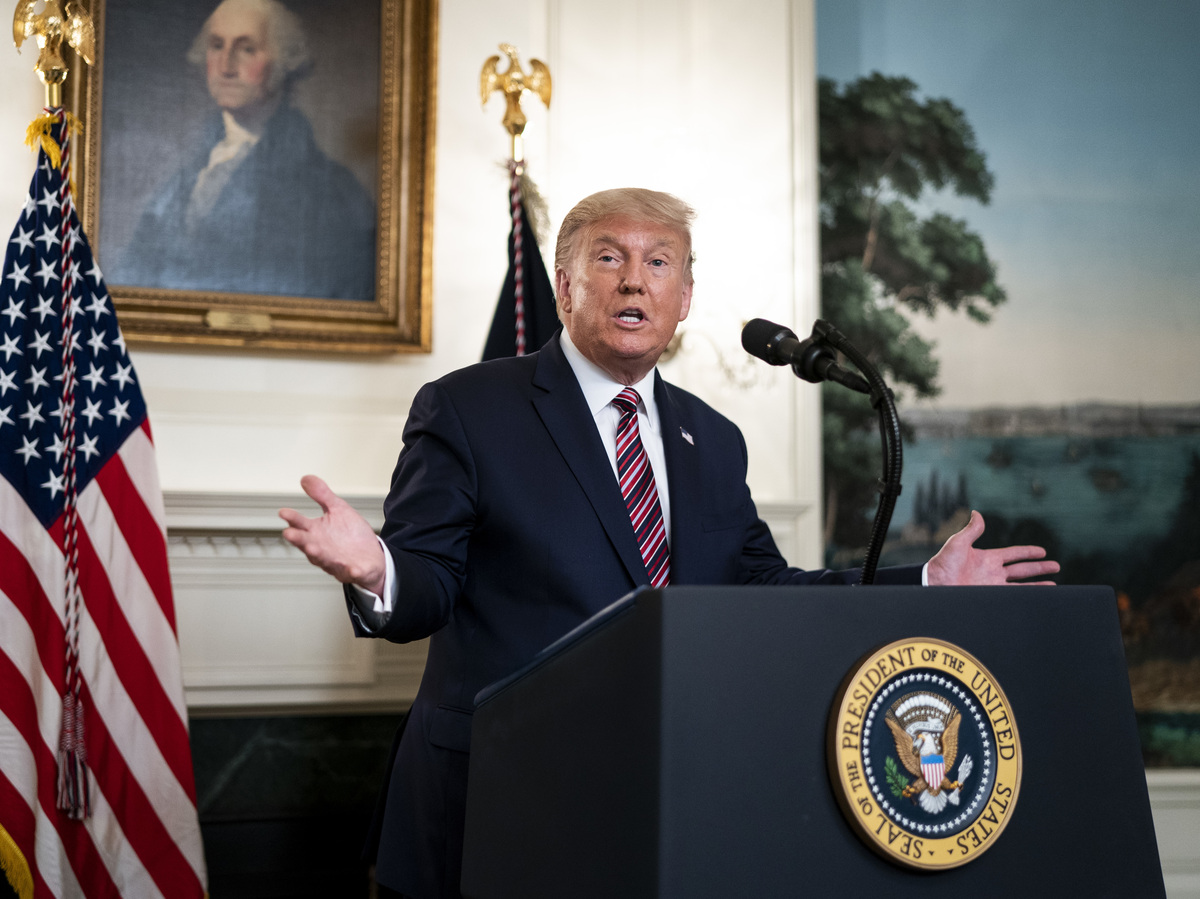 President Trump defended downplaying the coronavirus as necessary to keep the nation calm after excerpts were released from Bob Woodward's new book, Rage.

President Trump is under fire for misleading Americans by publicly downplaying the risk of the coronavirus even while he privately acknowledged the magnitude of the threat, a central revelation in Rage, a new book by journalist Bob Woodward.

"I wanted to always play it down," Trump said on March 19 in an interview recorded by Woodward. "I still like playing it down because I don't want to create a panic."

Trump told Woodward privately in early February that he understood the danger and severity of the coronavirus, even as he told Americans not to worry about something he compared to the seasonal flu.

Trump has defended his approach by saying he wanted to avoid panicking the public. "I don't want to jump up and down and start screaming, 'Death! Death!' because that's not what it's about," Trump said when pressed this week about why he played down COVID-19 in February and early March.

More than 190,000 Americans have died from the coronavirus and the number keeps rising.

The president said he sees himself as a cheerleader for the nation, keeping panic at bay. But this "keep calm and carry on" approach is "incongruous on its face" with the way he has talked about other threats — those where fear might work to his political advantage, said Jennifer Mercieca, a historian of political discourse from Texas A&M University, who has written a book about how Trump wields language.

Trump has time and again used ominous language and tweeted out videos of violence in other areas where he sees risks for the nation. As Trump campaigned during the 2018 congressional elections, he described "caravan after caravan after caravan of illegal aliens" as he sought to generate concern about Central American migrants seeking asylum. He said they would "flood into our country and overwhelm your communities. That's what's happening. Have you seen the pictures?"

More recently, he has incited fear about low-income housing destroying the suburbs and of anarchists taking over towns. On Thursday, shortly before a press conference at which he insisted it was important to avoid panic about the virus, Trump took a very different tack on a different issue on Twitter:

The Democrats never even mentioned the words LAW & ORDER at their National Convention. That’s where they are coming from. If I don’t win, America’s Suburbs will be OVERRUN with Low Income Projects, Anarchists, Agitators, Looters and, of course, “Friendly Protesters”.

And then there are hurricanes, a threat where — as with the pandemic — a dose of fear and preparation can save lives. With storms, Trump is there every time to play up the potential for danger, "the likes of which you've never seen before."

"It seems to be one of the biggest hurricanes we've ever seen," Trump said about Hurricane Dorian, warning people in several states, including Alabama, to prepare for the worst. That storm wasn't headed to Alabama, but a map of the storm was modified to look like it was, an incident that became known as "Sharpiegate."

Trump has cast the stakes in the upcoming presidential election in apocalyptic terms, railing that a Democratic win would crash the economy. "Your stocks will be down to nothing," Trump threatened earlier this month. "And we will have a depression like you've never seen before."

Mercieca said that for this truly frightening pandemic, Trump never settled on a way to make the rhetoric work for him. He went from downplaying the risk to casting himself as a wartime president leading America into battle with the invisible enemy to again urging everyone to return to normal life, saying the virus would go away eventually. On Thursday, Trump insisted he was taking the pandemic seriously and then, in the next breath, returned to cheerleading.

"We are going to get through this," Trump said. "And we are right now, I think, I hope, we're rounding the final turn."

But that's not the assessment of the nation's leading infectious disease expert, Dr. Anthony Fauci. With approximately 40,000 new cases and 1,000 deaths per day in the U.S., Fauci said the numbers are way too high and could get worse as the weather gets cooler and people spend more time indoors.

"We need to hunker down and get through this fall and winter because it's not going to be easy," Fauci said.