Accessibility links
Hanging Tree Guitars: Made Out Of A Tree Once Used For A Lynching Freeman Vines is an African American luthier who creates what have been called "contemporary art sculptures hidden as guitars" out of old wood, some of it from a tree used for a lynching. 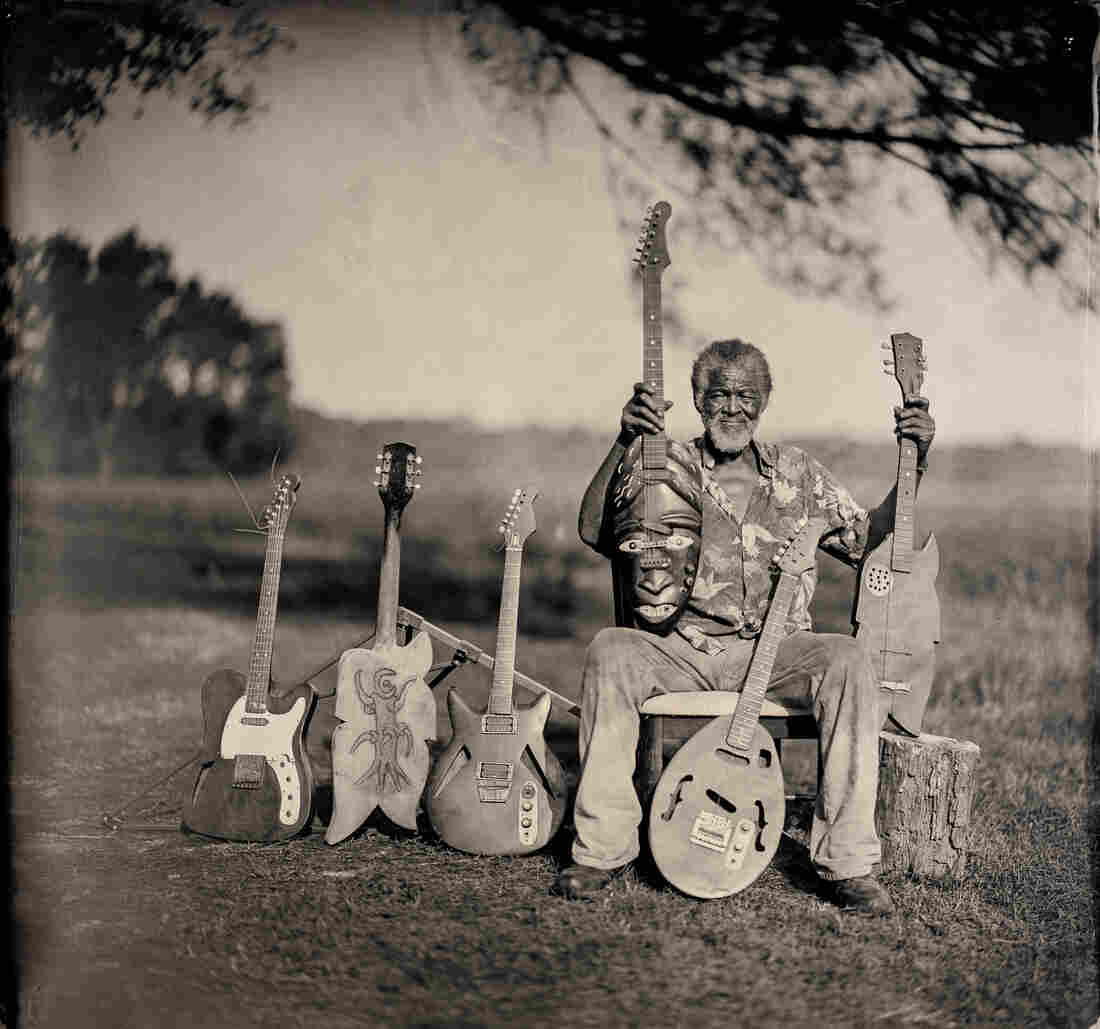 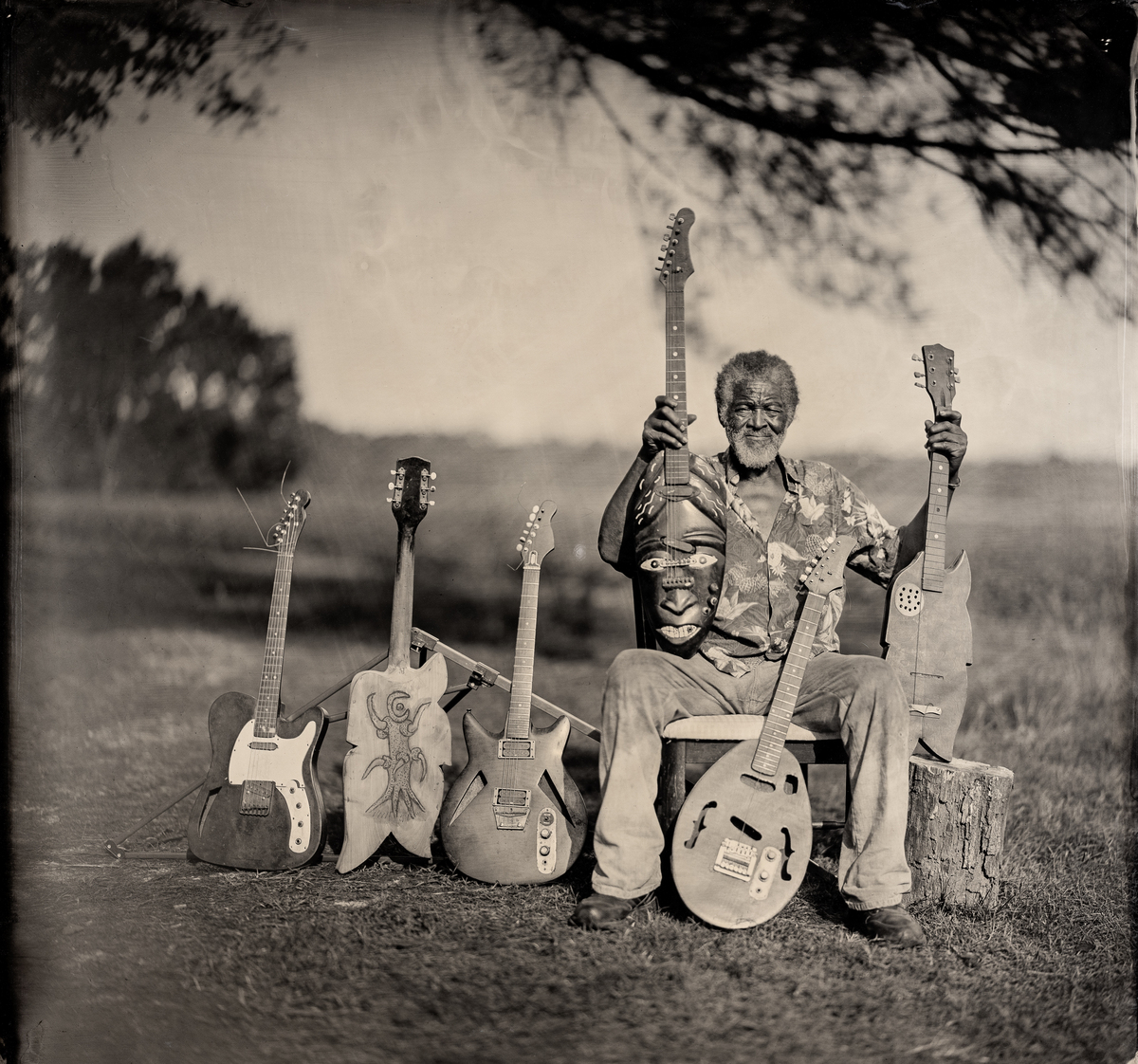 Freeman Vines and his guitars in 2015.

A new book and museum exhibition celebrate the work of North Carolina luthier Freeman Vines. His handmade guitars are crafted from found materials and hunks of old wood, including some from a tree once used for a lynching.

"There was something about that wood that was mental, spiritual," Vines says.

It made him uneasy working with the black walnut – acquired from an elderly white man, something that had likely been passed down as a memento.

"Working with that wood was a spiritual thing," he says. "Not good, not bad, and not ugly. But just strange."

Photographs of the guitars and Vines' story are the subject of the book Hanging Tree Guitars which features photographs by Timothy Duffy, president of the Music Maker Relief Foundation – a group that provides aid for aging musicians.

Duffy spent five years visiting Vines, now 78, and taking pictures of the artist and his guitars.

Duffy uses a style of photography that was popular in the late 19th century – the tin-type, which uses chemicals on a sheet of metal to capture an image. The technique yielded a striking cover photo for the book. Vines is sitting in a field with some of his guitars strung on a frame overhead. 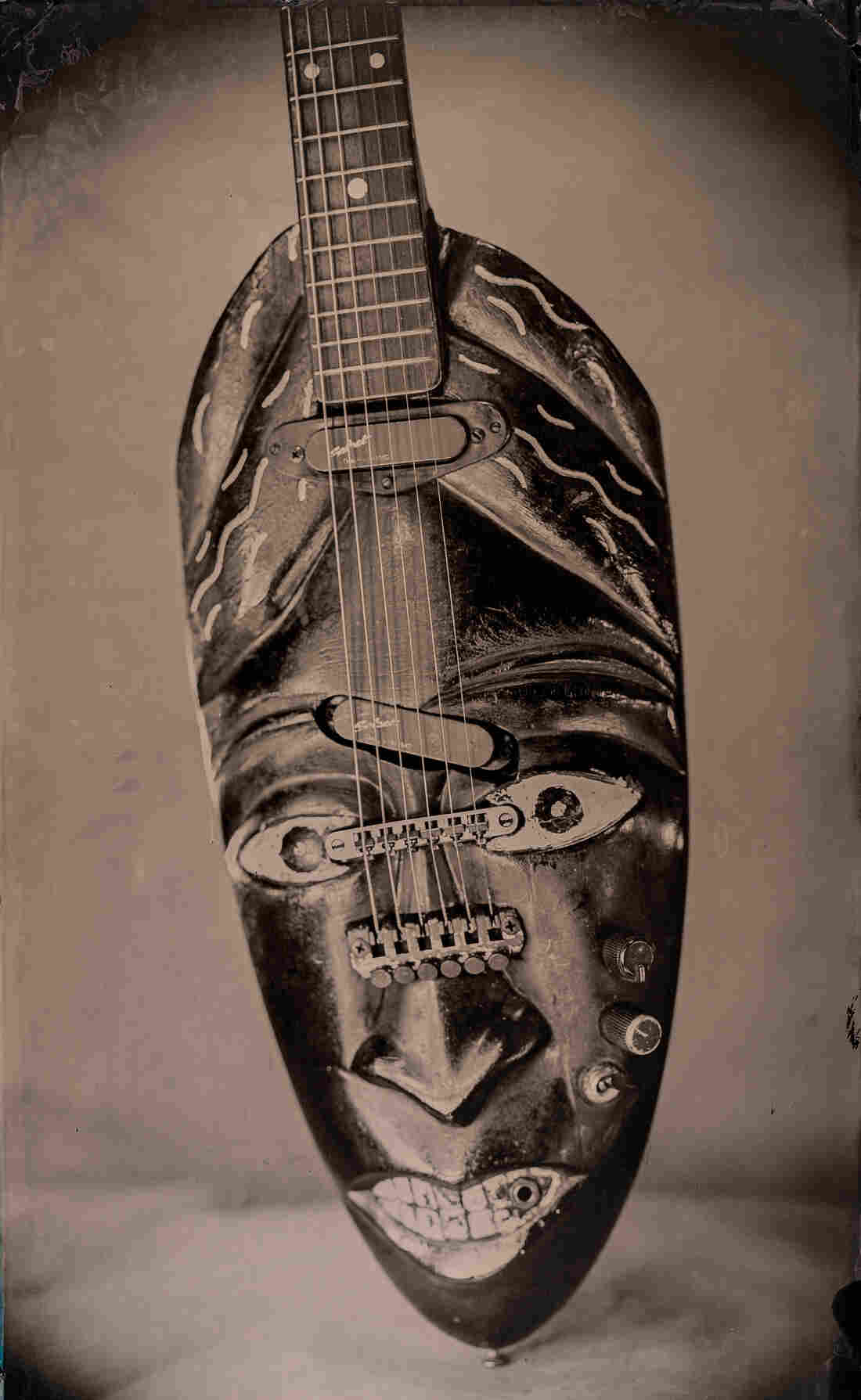 Vines works from a drugstore turned studio in downtown Fountain – a 3-block stretch tucked amid tobacco fields in rural eastern North Carolina. On my visit, the gray-bearded Vines was wearing a surgical mask and struggling with a flareup of gout in his foot.

His latest project is a guitar made out of wood from a 100-year old piano.

"That wood has a life in it," Vines says. "And when you recreate an instrument on it, it comes alive."

He cleans the wood with a wire brush, shapes the body of the guitar, and scoops out portions to get high and low tones.

"I toned the wood with sound chambers," he explains, tapping on the wood to hear the result. 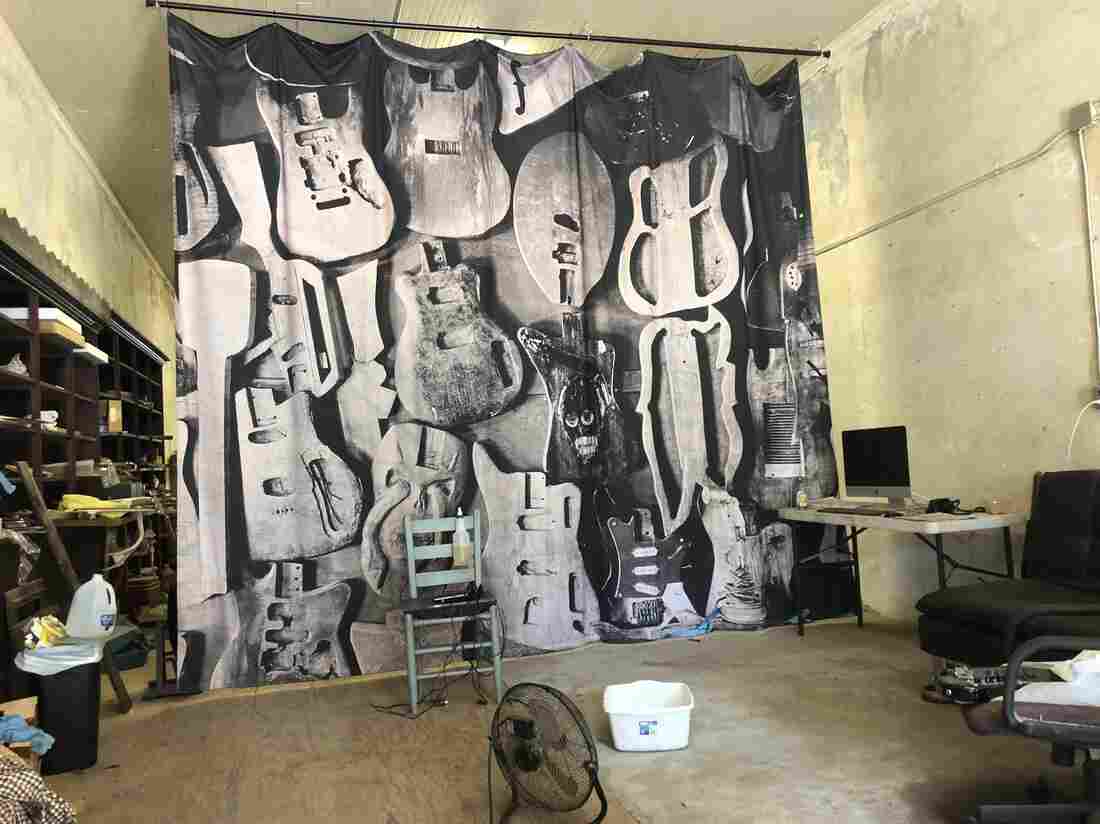 Vines plays guitar himself and started making instruments in the 1950s, selling them to other musicians around the South. He peppers his conversation with "John Brown" this and "John Brown" that as a euphemism.

"I used to be a bad cursing guy — had what they call a foul mouth," he says. "I have substituted words like that there."

Like when he describes how he brings out the wood grain in his "hanging tree" guitars:

"That was already in the wood. All I did was complement it. Scrape the John Brown dirty bark and stuff around it and there it was."

He could begin to see the outlines of what the guitar should look like.

"The more you scraped it off, the more you could see the design in there," Vines says. "They don't sound exactly like nary instrument I ever messed with. Not an eerie sound, not a comfortable sound, but just a sound. Hard to explain. Won't get into that though because it's too deep."

Born to a sharecropping family, Vines says he was rough as young man desperate to escape the tobacco fields. He worked at times as a bounty hunter, a job he describes as "harvesting people." And, as a bootlegger, for which he did time in the penitentiary. There he learned to read starting with a Captain Marvel comic book, having no formal education beyond the third grade.

In the Hanging Tree Guitars book, Vines says, "The college I went to is spelled C-H-A-I-N G-A-N-G."

In his studio, Vines tells the story of how he first learned to play guitar as a child – not altogether a pleasant memory.

"Scared of him. Then one day he brung a raggedy guitar down there — a Martin. He made me call it Mr. Martin."

The man taught him to play "Wildwood Flower," the old folk song made famous by the Carter family. Vines says his friends laughed and called it hillbilly music but he says it was not that far from the blues, playing a riff he says is nothing but "Wildwood Flower" slowed down.

Freeman Vines is full of stories but he clams up when pressed on the one behind the hanging tree.

"Don't want me hear nothing else about it," he says, shaking his head. "I don't want to know no more about it because I live around here."

Vines says there's a certain side of the fence you know not to go on, even today nearly 90 years after that lynching.

Fear lingers, according to Timothy Duffy.

"That's the culture of silence when you don't talk about it. That keeps it invisible, keeps it in the past."

Duffy and his colleagues looked deeper into the story of the wood. It led them to rural Wilson county, down a gravel road amid soybean fields.

"If you look back that way, where we turned in by the road, is where Oliver Moore's house was," says Aaron Greenhood with Music Maker Relief Foundation, taking shade under a sprawling tree branch in the sweltering summer heat.

"That's where the lynching tree was: just out front of his house," he says.

Oliver Moore was a Black tenant farmer and shoe repairman who was accused of raping the white landowner's daughters. He was arrested but a white mob abducted him from the Tarboro jail and took him back home.

"They hung him from the tree in front of his house," Greenhood says. "His family was supposed to be inside." Moore's hanging body was then riddled with bullets.

The lynching was reported in North Carolina newspapers in 1930, but since then the details have been buried.

Now they're included in the new exhibition, "Freeman Vines: Hanging Tree Guitars," at the Greenville Museum of Art. 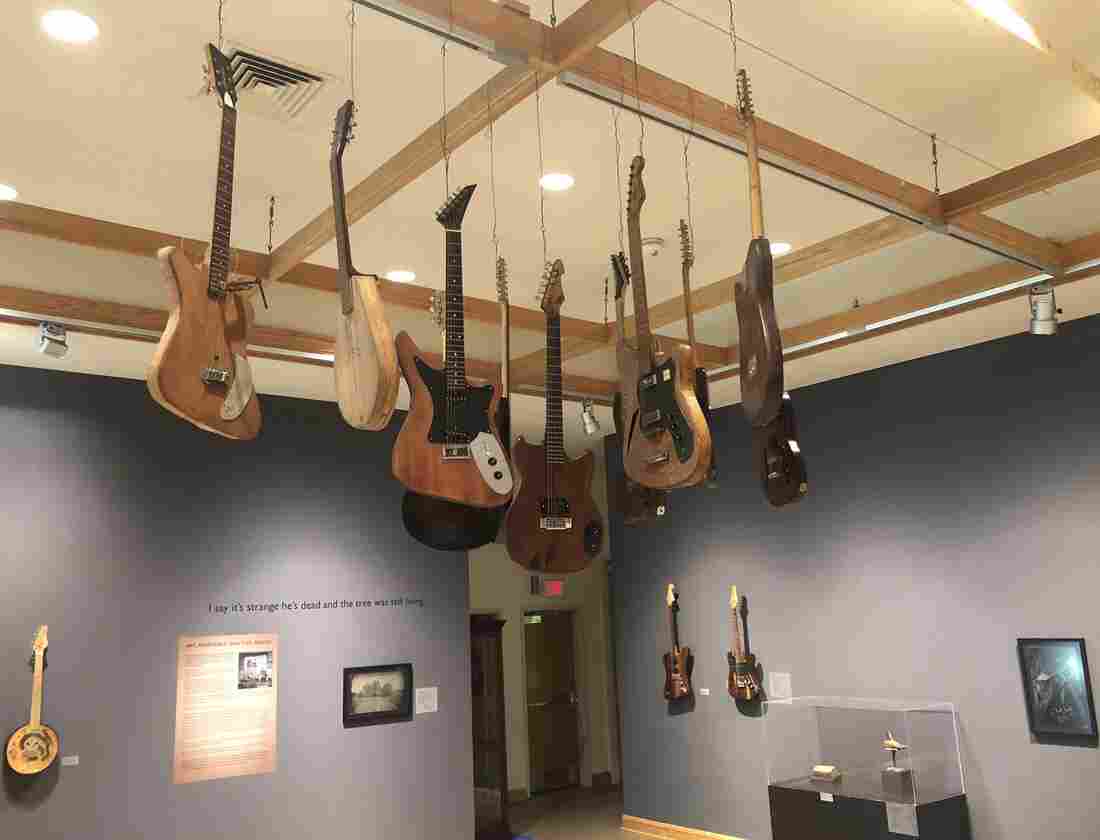 Vines guitars are displayed on the walls, along with interpretive material about rural African-American life in North Carolina under Jim Crow, including the Moore lynching.

"People are still being killed today," says museum executive director Trista Reis Porter. "So you can kind of see that immediate, that direct connection of history to current life."

At the center of the room, Vines guitars hang from rafters in the ceiling.

"Sometimes people need to be shocked," says Reis Porter. "I think that that's kind of a role that museums and art can really play in kind of helping people really be confronted with the reality of something so, so difficult and traumatic."

She hopes it helps people reflect on how that trauma continues to affect people today. 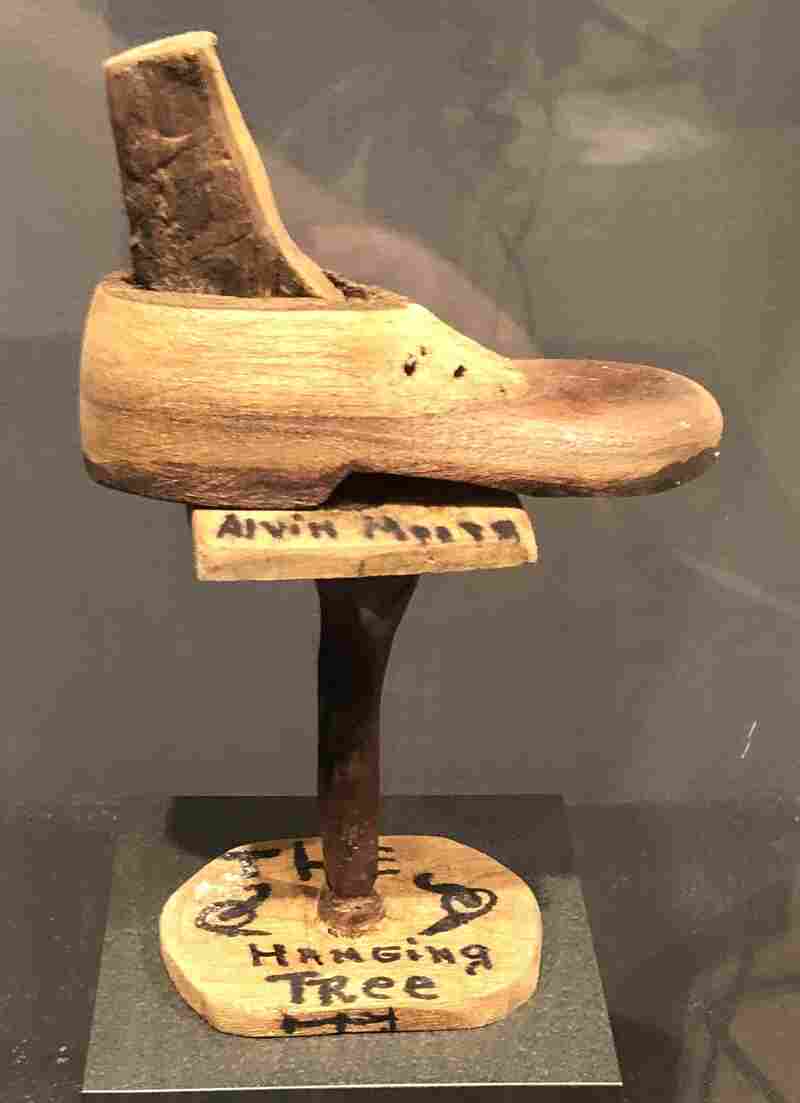 Freeman Vines, who rarely leaves his studio, got to see his guitars on display at the museum before the show opened to the public. It made him feel good he says, but he didn't let on because he didn't want anyone to think it was going to his head.

"I tried to not let folks know really how happy I was cause then they'd say, 'he's winking and dying, getting weak looking at a museum,'" says Vines. "So I kept my front up, hid behind it."

The "Hanging Tree Guitars" exhibition, which also includes some of Freeman Vines' sculpture, has just opened at the Greenville Museum of Art and runs through December. Shows are also planned in Winston-Salem and Portsmouth, Virginia.