Accessibility links
As Wildfires Grow More Intense, Iconic Western Forests May Not Come Back Extreme fires are more likely with climate change, and they're making it harder for some tree species to regenerate. Ecologists say this could transform large areas of Western forest into grassland. 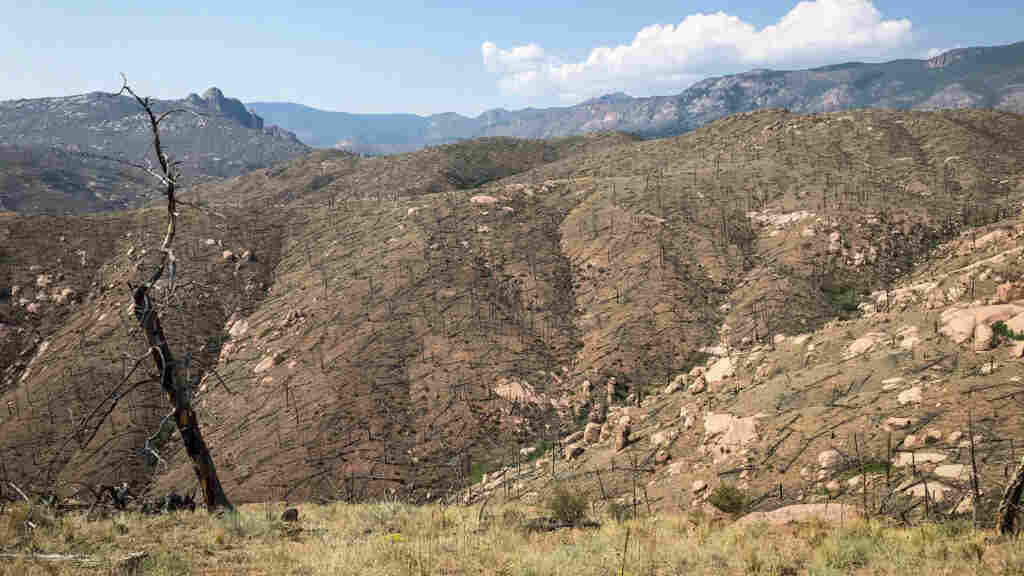 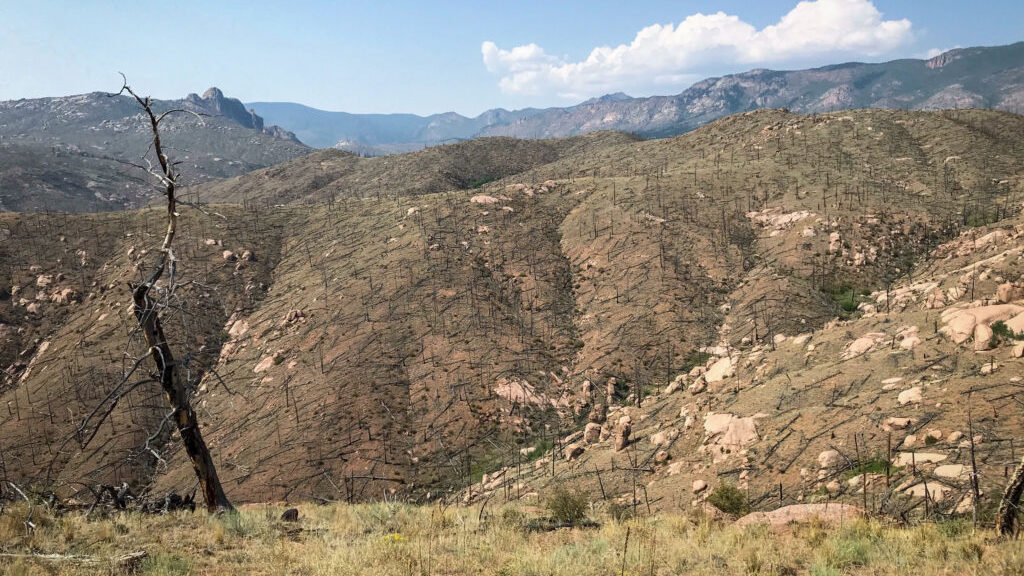 Nearly two decades after the 2002 Hayman fire in Colorado, this high-severity burn area near Cheesman Lake is still treeless.

After a quick hike off a steep dirt road, forest ecologist Marin Chambers stands surrounded by grasses, shrubs and blackened bare trees. This is part of where the Hayman fire — until last month, Colorado's largest in recorded history — burned northwest of Colorado Springs back in 2002. The ground is dry, crunching underfoot.

"What we're seeing is a very large high-severity burn patch, where the vast majority of the trees have died," says Chambers, with the Colorado Forest Restoration Institute at Colorado State University.

These 18-square miles burned hot and fast in a single day, driven by how dense the forest was because of past fire suppression, high winds and extreme drought. Now, nearly two decades later, something you'd normally see after a wildfire is missing: new trees.

"Some regeneration may be occurring, but certainly not enough to recreate a forest in the near term," Chambers says. She and her colleagues have found that forests are struggling to grow back some of the state's most iconic species, like ponderosa pine and Douglas fir.

High-severity fires leave behind massive burn areas with almost nothing alive. And any baby trees simply can't thrive in the increased heat and drought brought on by climate change.

"Imagine being a ponderosa pine seed trying to grow out here," Chambers says. "It's a pretty intense environment."

If there is forest regeneration, Chambers says it happens in bands along the forest edge, where surviving trees can still drop their seeds. But she says even that isn't happening at lower elevations, where it's hotter and drier. She's not sure this area of the Hayman fire will ever reforest.

A new study led by the University of Colorado Boulder also finds large parts of the Southern Rocky Mountains will become unsuitable for ponderosa pine and Douglas fir tree regrowth as the climate continues to warm.

Lead author Kyle Rodman and his team found a stark dividing line, with very little regrowth after the 2000 Walker Ranch Fire near Boulder. The year 2002, Rodman says, "was one of the driest years we've had in the past century or more. So any seedlings that might have established right after the fire, there's a good chance they would have been cooked in that drought." 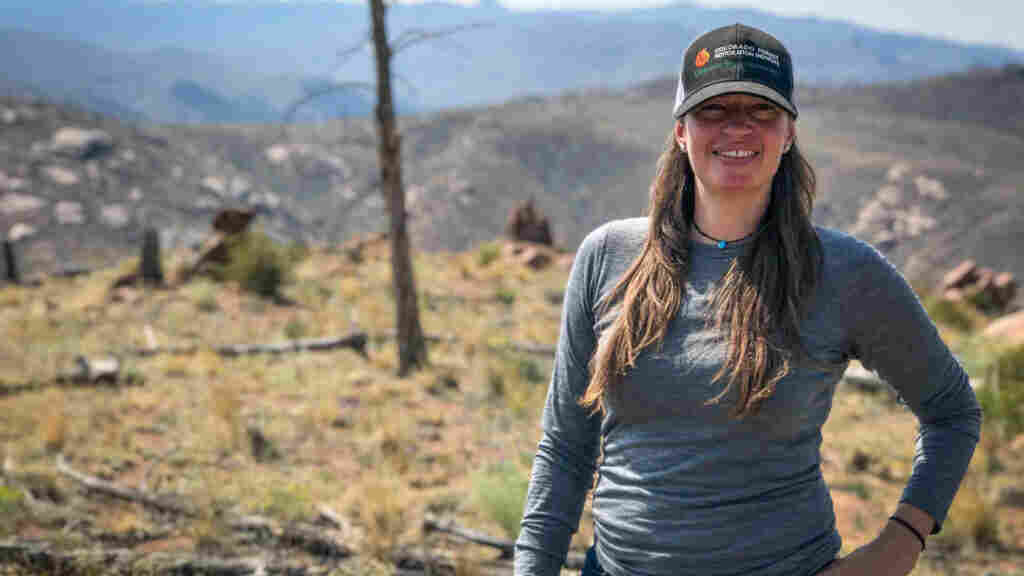 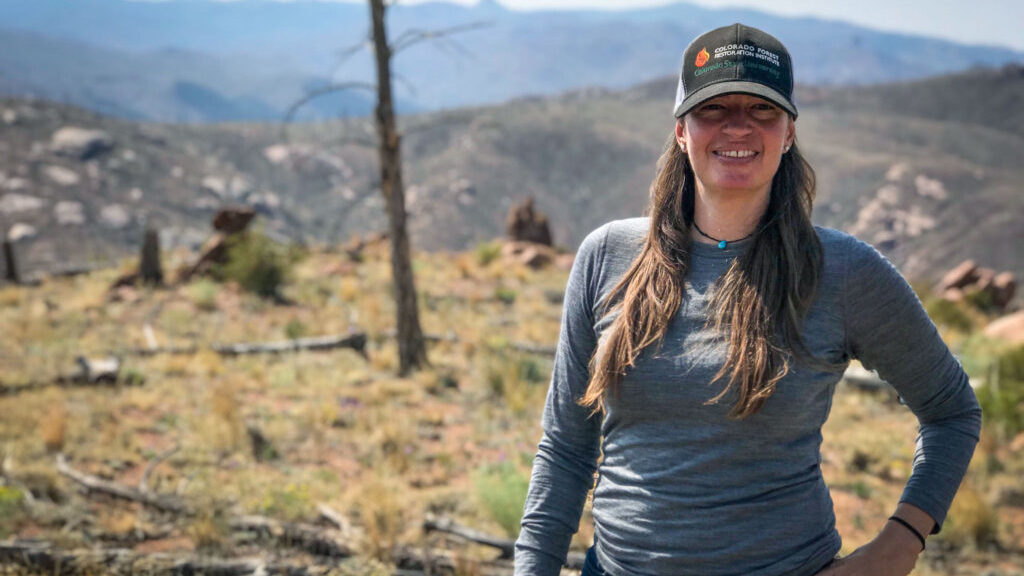 For areas that can't regenerate, research has found they may instead convert to grasslands.

Camille Stevens-Rumann, also of Colorado State University, says there can be lots of benefits to having patches of grasslands between forested areas. But it's a problem "where we're talking about tens of thousands of acres that have transitioned from forest to grasslands."

One major concern is that trees sequester carbon. Fewer trees will capture less carbon, which means more warming, and therefore fewer trees, in a cycle that will make it hard to reach carbon neutrality.

Thomas Veblen, of the University of Colorado Boulder, says this poses a problem for tree replanting efforts touted as a way to combat climate change.

"Trees need moisture to survive, and they simply are not going to be surviving in the many, many places where we would like to have them planted and sequestering carbon," he says.

Stevens-Rumann has studied a large range of burned forests across the West and found some areas no longer able to support the same trees that have been there for one or two centuries.

"We're really moving away from the suitable climate for tree regeneration to happen," she says.

But she wants to emphasize that Colorado is not losing all of its forests.

Some trees, like aspen and oak, do better with regrowth after a fire. She says lodgepole pine forests, such as what's been burning in the Cameron Peak Fire north of Rocky Mountain National Park, have also been found to recover better than some lower-elevation trees. Fire actually makes their cones open to drop seeds.

In other cases, a different species may move in, or trees may migrate to higher, cooler elevations.

"That gives me hope for these landscapes," she says. "And I think part of what we all have to accept, in this new and changing world, is that these ecosystems are going to look different than the ones that maybe we have grown fond of in the past."