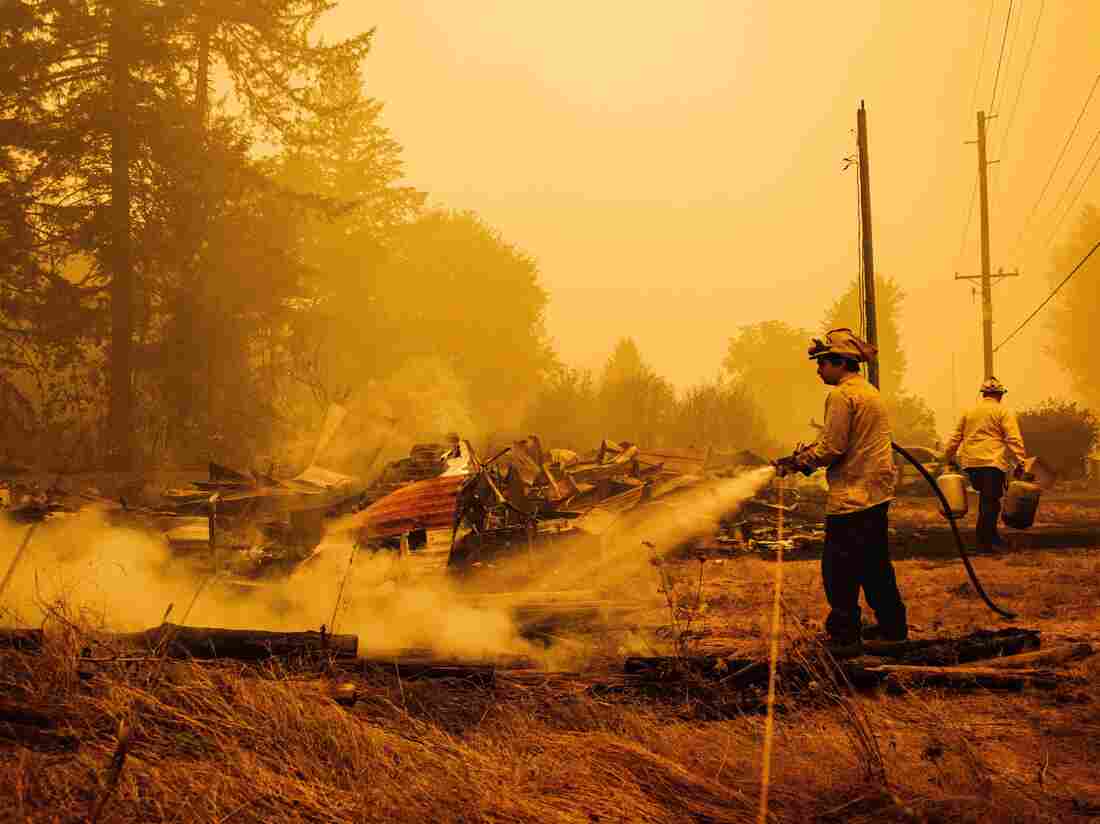 Oregon firefighters put out embers in Mill City, Ore., on Sept. 10, 2020, as they battle the Santiam Fire. As fires ravage the Pacific Northwest, fear and rumors have taken hold on social media. Kathryn Elsesser/AFP via Getty Images hide caption Oregon firefighters put out embers in Mill City, Ore., on Sept. 10, 2020, as they battle the Santiam Fire. As fires ravage the Pacific Northwest, fear and rumors have taken hold on social media.

As fires ravage Oregon and Washington, burning around 1 million acres in a matter of days, fear and rumors have begun to take hold on social media.

On Facebook community groups in areas hard hit by fires, residents have begun frequently posting about forming patrols to look for looters, or worse: antifa, a loosely defined leftist group that is a frequent focus of far-right conspiracy theorists.

"Has anyone seen or heard of 3 guys with Hoodies throwing bottles of gasoline in the Boring golf course?" one person speculated in a private Facebook group for the town of Boring, Ore. "I don't know if it's true, so I'm asking here if anyone knows."

As happened in recent months in response to protests for racial justice, vigilante groups have turned out in rural communities to ward off unsubstantiated threats from antifascist protesters. One such patrol, a group of armed men, stopped an Oregon Public Broadcasting reporter in the Clackamas County community of Molalla on Thursday and told them to leave immediately.

Law enforcement officials who spoke to OPB said they have seen no evidence of antifa or any other vigilante groups starting fires.

The Douglas County Sheriff's Office in Southern Oregon took to Facebook this week to knock down rumors about six antifa members being arrested for setting fires.

"THIS IS NOT TRUE! Unfortunately, people are spreading this rumor and it is causing problems," the agency said. "Rumors spread just like wildfire and now our 9-1-1 dispatchers and professional staff are being overrun with requests for information and inquiries on an UNTRUE rumor."

Similar rumors have circulated in Jackson County in Oregon, where law enforcement has opened a criminal investigation into the Almeda Fire.

Oregon State Police, the Jackson County Sheriff's Office and the Ashland Police Department are looking into how the blaze began. So far, it has killed at least one person and burned at least 600 homes, mostly in the towns of Phoenix and Talent.

"It involves not only the setting of the fire but also the death of somebody immediately after the fire was set, somebody that was killed by the fire," Ashland Police Chief Tighe O'Meara said. "That investigation is criminal and it is ongoing."

O'Meara told OPB there is no connection between his investigation into the Almeda Fire and any political organization.

"In no way does it point towards any political group, including anybody associated with antifa," he said. "Any rumors suggesting that it is pointed toward antifa are entirely fabricated."

O'Meara continued: "There's no reason to believe that this is politically motivated. And anybody that is speculating in that direction is being reckless and not working toward solving this problem or any other problem. It's irresponsible for anybody to engage in that kind of speculation. There's absolutely no basis for it."

"To my knowledge there have been no arrests for any of these large fires," Fox said in an email.

"FBI Portland and local law enforcement agencies have been receiving reports that extremists are responsible for setting wildfires in Oregon," Cannon said in a statement Friday. "With our state and local partners, the FBI has investigated several such reports and found them to be untrue. Conspiracy theories and misinformation take valuable resources away local fire and police agencies working around the clock to bring these fires under control."

Contrary to the rumors, some people who have participated in Portland's racial justice protests have brought supplies to firefighters and evacuees. A group called the Portland Witches, a fixture at the city's months-long protests, was in Clackamas County on Thursday dropping off two vans full of supplies. The group said it particularly wanted to help immigrant communities affected by the fires.

"We're dropping off supplies because we saw a need," said R, who asked not to be identified by name for their protection. "That's just what we do. Anytime we see people who are really in need, we help out the best we can — whether that's with protesters, people who are houseless or people who are being evacuated because of the fires."

As of Thursday, more than 1 million acres had burned in Oregon and Washington over the previous 48 hours, according to the Northwest Interagency Coordination Center in Portland. While the increase is due to fire growth, part of it is also because of better fire mapping, a spokeswoman for the agency said.

In Oregon, at least 668 homes have burned. In Washington, the number of homes lost stood at 166, as of Thursday.

So far, at least four people have died in the two states. In addition to the Almeda Fire fatality, two others died in the Beachie Creek Fire — also known as the Santiam Fire — that has torched communities in the Santiam Canyon, according to the Marion County Sheriff's Office. Those deaths were a teenage boy and his grandmother. A one-year-old child reportedly died in Washington's Cold Creek Fire, burning near Omak, not far from the Canadian border.

Deaths, homes and businesses lost in the fires, and the numbers of acres torched are all expected to increase in the coming days, as fires continue to spread and damage is assessed.

That type of widespread destruction from Northwest fires is one reason rumors on how the wildfires began are becoming increasingly mainstream.

Republican Michael Cross, who is running for Oregon attorney general in November's election, posted on Facebook this week that the fires were clearly arson, constituted domestic terrorism, and stated he'd heard of 14 people involved in starting fires.

"It seems like some of these are organized," Cross told OPB. "I don't know that antifa is behind it. I think that somebody is behind it, because it seems organized for it to happen all at once."

When pressed repeatedly, Cross couldn't provide evidence of those cases. Rather, he cited a case in Douglas County, which the sheriff's office has dismissed as untrue. Cross also cited a case involving a man arrested in Lane County for arson for a fire that's currently listed as 100% contained.

"It defies common sense and logic" with so many fires going on at the same time, Cross said, "both large and small, [that] this is some kind of random occurrence."

Fire officials, however, have been clear about what is driving the fires that have caused tens of thousands of Oregonians to be under some level of an evacuation order. Those include a once in a century windstorm that began early this week, high temperatures and downed power lines due to the wind.

Some fires have been caused by people, but those causes aren't necessarily intentional or criminal. At least one fire in Clackamas County last week started when an RV pulling a vehicle had loose chains dragging that sparked a nearby field.

Police and fire officials say they will investigate the causes of all the fires the state faces, after conditions are more stable and life and property are protected. For now, those officials are clear: There's no evidence antifa or any other political group is committing arson at this time, and online speculation wastes precious resources needed to save lives.