Accessibility links
Ayad Akhtar On 'Homeland Elegies': It's Real, It's Fiction, It's A Paradox The narrator's name in the novel is also Ayad Akhtar, and the book reads like memoir. Akhtar says he had to "pilfer" from his own life to write a novel that had the "addictive thrill" of reality TV. 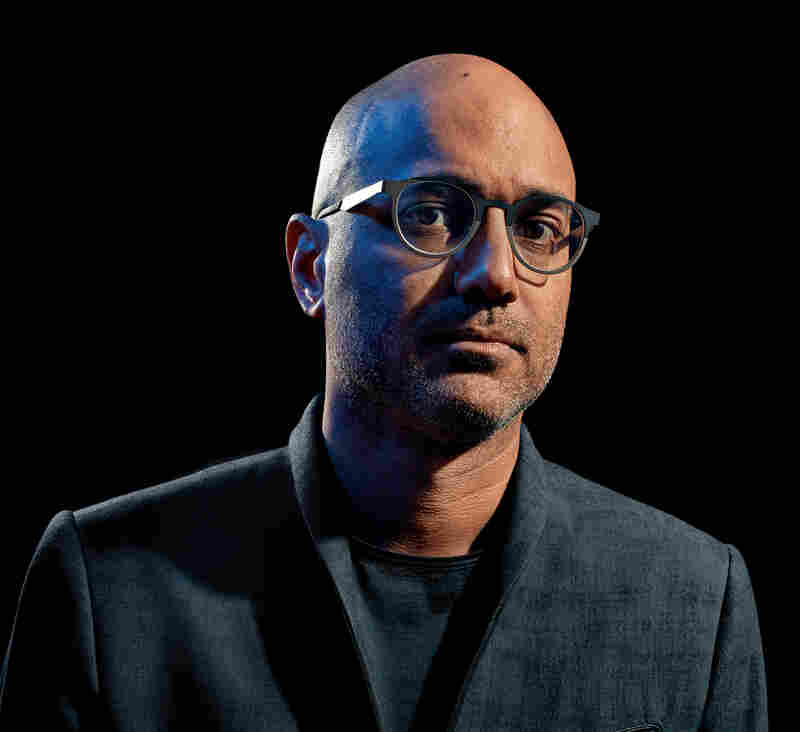 Ayad Akhtar won a Pulitzer Prize for Disgraced, his play about a conflicted American Muslim man living in New York after Sept. 11.

If you find yourself a little confused by Ayad Akhtar's latest novel, Homeland Elegies, that's by design.

"I wanted to find a form that would express this confusion between fact and fiction which seems to increasingly become the texture of our reality or unreality," he says.

Homeland Elegies is about a family, their ties to their homeland of Pakistan, and the new lives they make for themselves in the U.S. The narrator's name is also Ayad Akhtar, and it reads like memoir ... but it's a novel. Some of the fun lies in trying to tell what's fact and what's fiction.

For example — Akhtar's father was a successful doctor in the United States. The narrator also has a doctor father, who treats and falls under the spell of then-businessman Donald Trump. Was Akhtar's father really Trump's heart surgeon?

"I'm not going to answer that question, and not just for legal reasons," Akhtar says with a laugh.

On why he felt he needed to blend fact and fiction

I wanted to reach a reader today who is addicted to the thrill of breaking news and absorbed in the Instagram scroll feed. That reader, of course, is me, the reader who has lost interest, in a way, in anything that is not sensational in that way. I wanted to write a philosophical novel, but I wanted it to have the thrill of a kind of reality TV serial.

And I had to pilfer from my life. I had to use fact. I had to convince the reader at various times that what I was writing was real, and yet I'm calling it a novel.

All of those contradictions and paradoxes are at the heart of what the book is trying to express, which is a portrait of the country, you know, riven by divides in which finance has taken over, in which capitalism is king, and in which the personal success of the American dream cannot redeem all of what's failing in our country. And I felt I had to stage my life and the life of my parents and use that material in order to do this.

On the role of money in the book

To play the game of writing a novel of ideas but that had the addictive thrill of a reality television serial ... that sort of rise to success and the fulfillment of the American dream had to be sexy and it had to be vivid.

And it turns out, at least for the narrator in the book, that success comes at a cost — and the cost is not only a cost to his fellow citizens, but it's also a cost to his ability to have compassion for others and also his ability to be a meaningful observer of the world and then therefore to report on it in vivid and worthwhile ways. Like everything with the book, it's a paradox.

On why wealth changes the narrator's perspective

I think he says it at one point he becomes very enamored with the wealthy, and wants to be writing about the wealthy ... and feels that ... spending time with the wealthy and being interested in what they think about is really something that is of value as a proposition artistically. And I think it's up to the reader to decide whether it is.

I mean, you know, at the center of the book is this very, very elaborate portrayal of a very moneyed lifestyle ... so many people who have commented to me about reading it tell me how seduced they were by it.

That's a great question, and I think it's one I ask a lot. ... I lived in virtual indigence really until my late 30s. And I didn't give up on a number of occasions because I'd fallen so deeply in love with literature.

When I was 15, I had a high school teacher who changed my life. And since that point, I never wanted to do anything else with my life. I often say I fell in love so deeply with it that it has sustained me through all the difficulty. And I'd like to think that, you know, 10 years on from then that I would still be added if if I was struggling.

But it's hard to know, especially as we see the country come apart and we see that the safety nets, which we already, of course, knew didn't really exist, really don't exist. And the great marker of belonging in this country seems to be wealth at the end of the day.

The final section of the book is a very long chapter ... about my father in a court case in western Wisconsin, where he was sued for malpractice. ... Literally the day that I finished that chapter, the afternoon that I finished it, about an hour later, I got a call from my brother that my father had fallen and hit his head and he was in ICU. And he passed away a few just a few weeks later.

And so before I wrote the coda, you know, my father was gone and he'd been talking about wanting to go back to Pakistan for so many years. And so in a way, I was able to give him the ending that he never got.

Again, the book is both real and not real. You know, it's real to his dream. ... It's all real. It's also a work of fiction.

Bo Hamby and Reena Advani produced and edited this interview for broadcast. Beth Novey adapted it for the Web.