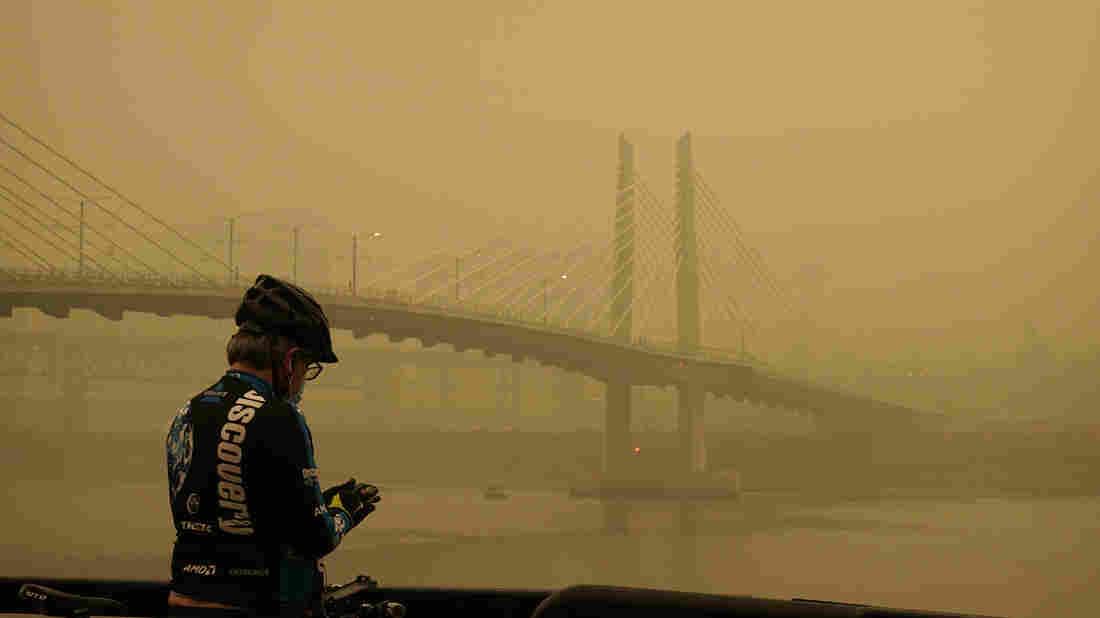 A man stops on his bike Saturday along the Willamette River as smoke from wildfires partially obscures the Tilikum Crossing Bridge in Portland, Ore. John Locher/AP hide caption 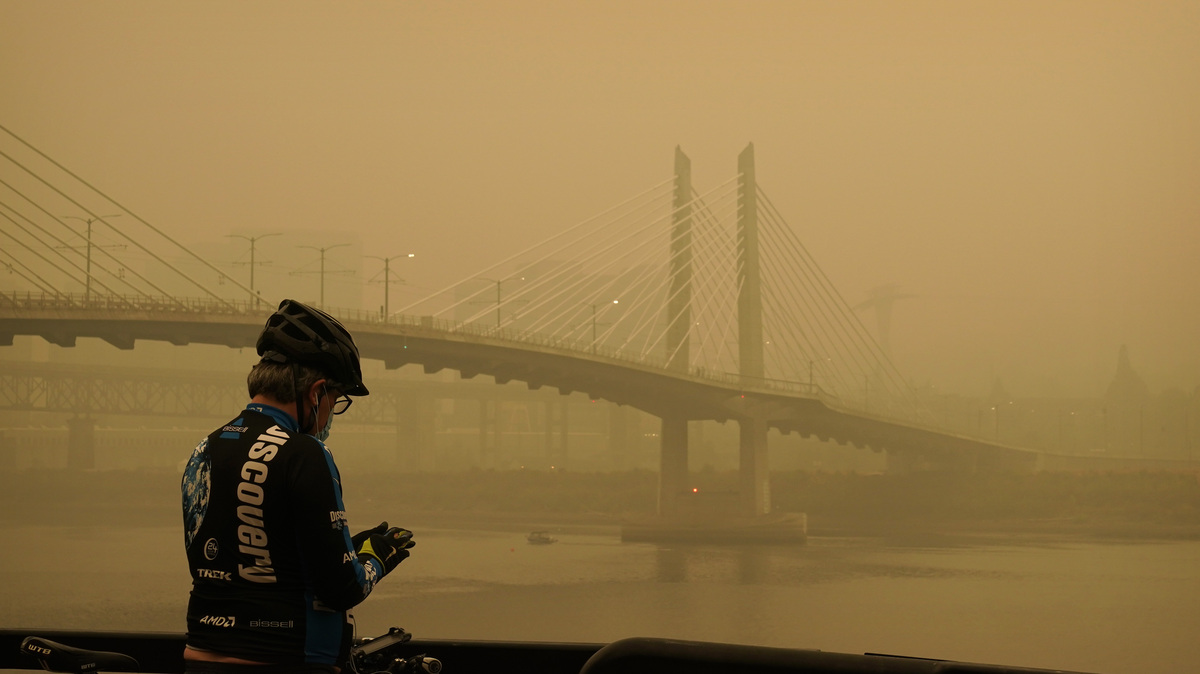 A man stops on his bike Saturday along the Willamette River as smoke from wildfires partially obscures the Tilikum Crossing Bridge in Portland, Ore.

Wildfires are destroying homes and communities on the West Coast — and they are also creating some of the world's worst air pollution in a region usually known for its clean living and stunning views. The fires and massive plumes of smoke are also affecting the fight to control COVID-19.

"When the forecast is Purple (very unhealthy), everyone needs to cut back on outdoor activities," the EPA site advises. It forecasts "very unhealthy" air quality for Tuesday.

Smokey and hazy conditions to continue, with all of our sites reporting visibility ranging between 1 and 3 miles. #CAWildfires #CAwx pic.twitter.com/Cn9kl5ehoG

"It's a bit surreal," says Dr. Jennifer Vines, the lead health officer for the Portland metro region, "to have these compounding public health issues," air quality risks and a pandemic.

Health experts are urging residents to stay indoors to avoid inhaling smoke and ash particles from the unprecedented fires.

One of our @NWS_IMET_OPS took this photo yesterday outside of Springfield, OR. Check out just how dense that fog really is! Today is similar with thick fog & smoke blanketing the area. We remind you all to please stay safe, stay well & turn to emergency managers for safety info. pic.twitter.com/xAPZNH09Ba

The international air quality monitoring website IQAir.com ranked Portland as No. 1 for worst air quality among the world's cities on Monday morning – worse than notoriously polluted spots in countries such as India, China and Israel. Seattle, San Francisco and Los Angeles were also in the top 10, reflecting the wildfires' huge size and broad impact.

Dozens of large blazes have now burned more than 4.6 million acres in 10 states, according to the National Interagency Fire Center. That includes more than 1.5 million acres in Oregon and Washington, the Northwest Coordination Center says.

Wildfire smoke can be lethal. While it often appears as a large cloud, Vines says the smoke is made up of lots of tiny particles, each much smaller than the diameter of a human hair. "These particles can penetrate deep into the lungs and even cross into the bloodstream," she adds.

People who are most in danger are older and those with underlying lung or heart conditions. Children are also at a greater risk, Vines says, "because they breathe higher air volumes relative to the size of their bodies and because their airways are smaller."

Whoa. Lots of fog and smoke, with much of it rather dense with low visibility. Many have reported only seeing as far as 50 feet in spots. Slow down, and use extra care while out and about. Conditions will slowly improve later this morning. #pdxtst #orwx #wawx pic.twitter.com/saWB3Ki1AA

Before the fires, health care professionals were urging people to get outdoors — but now they've reversed that advice. Testing rates for the coronavirus have dropped. And as people get out of harm's way, many of them are also mixing together indoors.

"We're going to be watching COVID testing numbers and hospital capacity really closely in the coming weeks," Vines says. She adds, "But I think right now many of us are just going one day at a time," trying to keep people safe.

What's worse, Vines says, "it's the same people who are at higher risk of complications from wildfire smoke and from COVID. We know many of them in the Portland area are Black, Indigenous or people of color."

The Occupational Safety and Health Administration is urging employers to provide N95 masks if employees are asked to work outdoors. If employees have underlying medical conditions, the agency is asking that they be allowed to stay home.

The National Weather Service issued a dense smoke and fog advisory for the northern Oregon coast Monday, saying visibility would be reduced to as little as 50 feet.