Accessibility links
The Volatile Mix Of A South Korean Church, Politics And The Coronavirus A clash over disease control between the government and a church is the latest flashpoint in a wider conflict between a right-wing coalition and President Moon Jae-in's liberal administration. 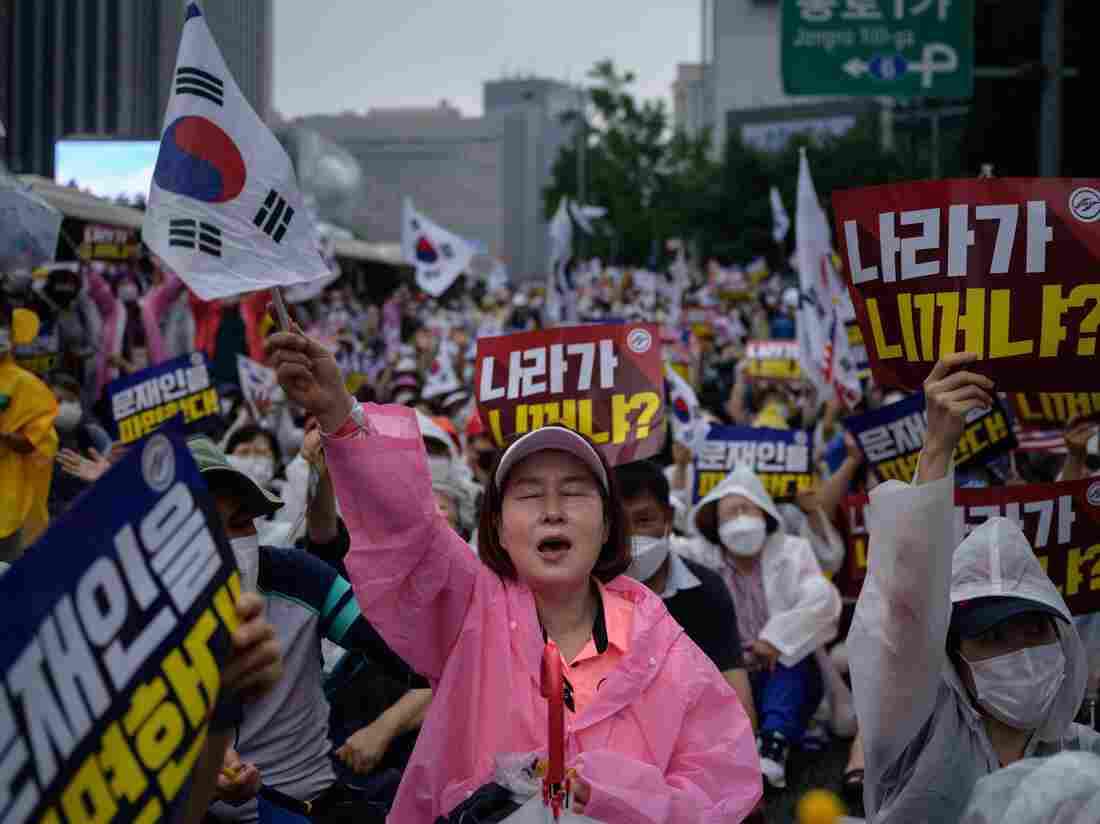 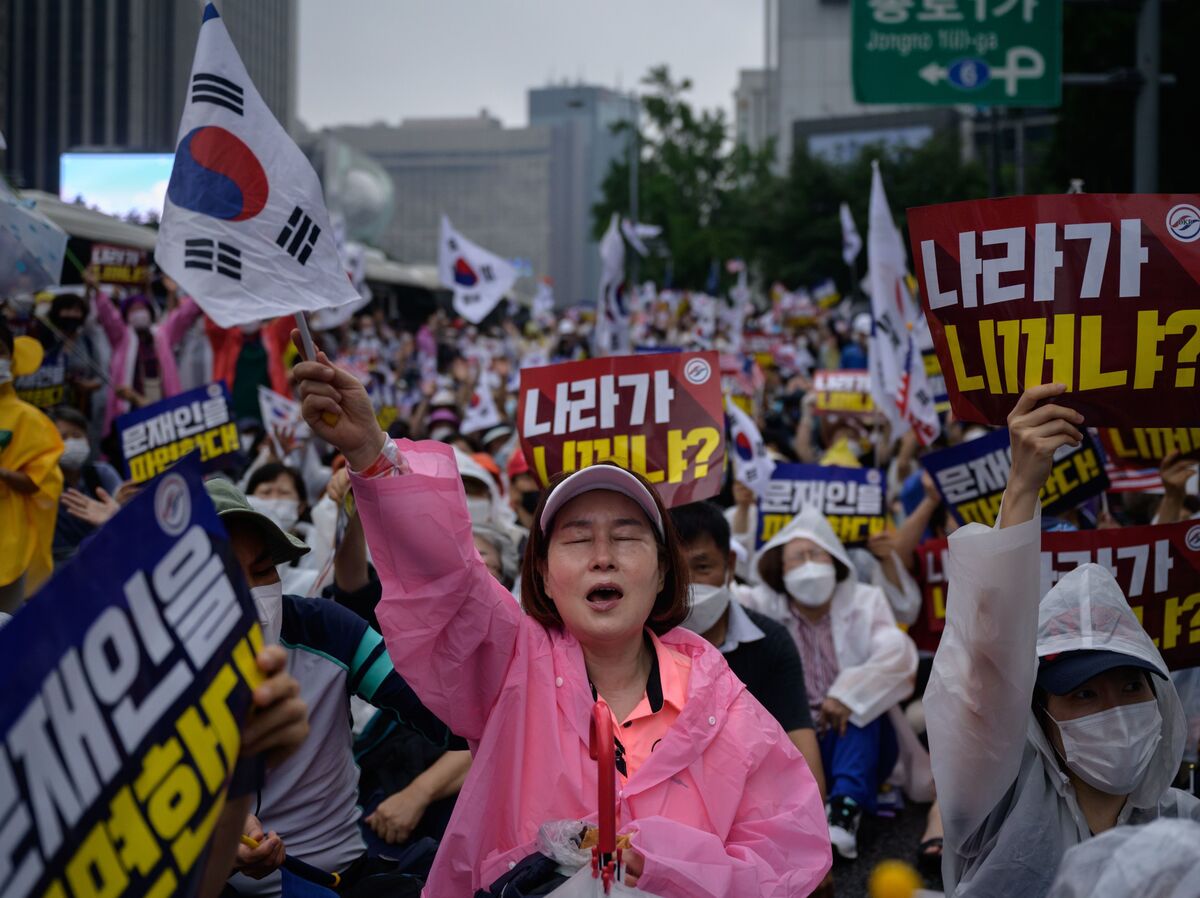 Members of conservative right-wing and Christian groups take part in an anti-government rally in Seoul on Aug. 15.

A decade ago, building cleaner Noh Il-soon was in the market for a new church. She had previously moved within Seoul, and when she did, she looked for a local congregation to join.

A missionary introduced her to a Presbyterian church called Sarang Jeil, Korean for "love comes first." Noh says she was immediately captivated by the sermons of the charismatic pastor, Jun Kwang-hoon.

"If my previous way of knowing Jesus, during 50 years in other churches, was like licking the outside of a watermelon," she says, "then knowing Jesus through our pastor was like splitting open the watermelon and tasting the sweet and juicy fruit inside."

The church had become increasingly visible and influential among fundamentalist Christian groups in South Korea, but its fortunes recently soured.

Authorities say the church has become the main cluster in a new wave of COVID-19 infections that has threatened to reverse the country's early success in controlling the virus. In addition, Jun, the charismatic pastor, is now in jail, accused of illegal election campaigning and libeling South Korean President Moon Jae-in by calling him a North Korean spy. 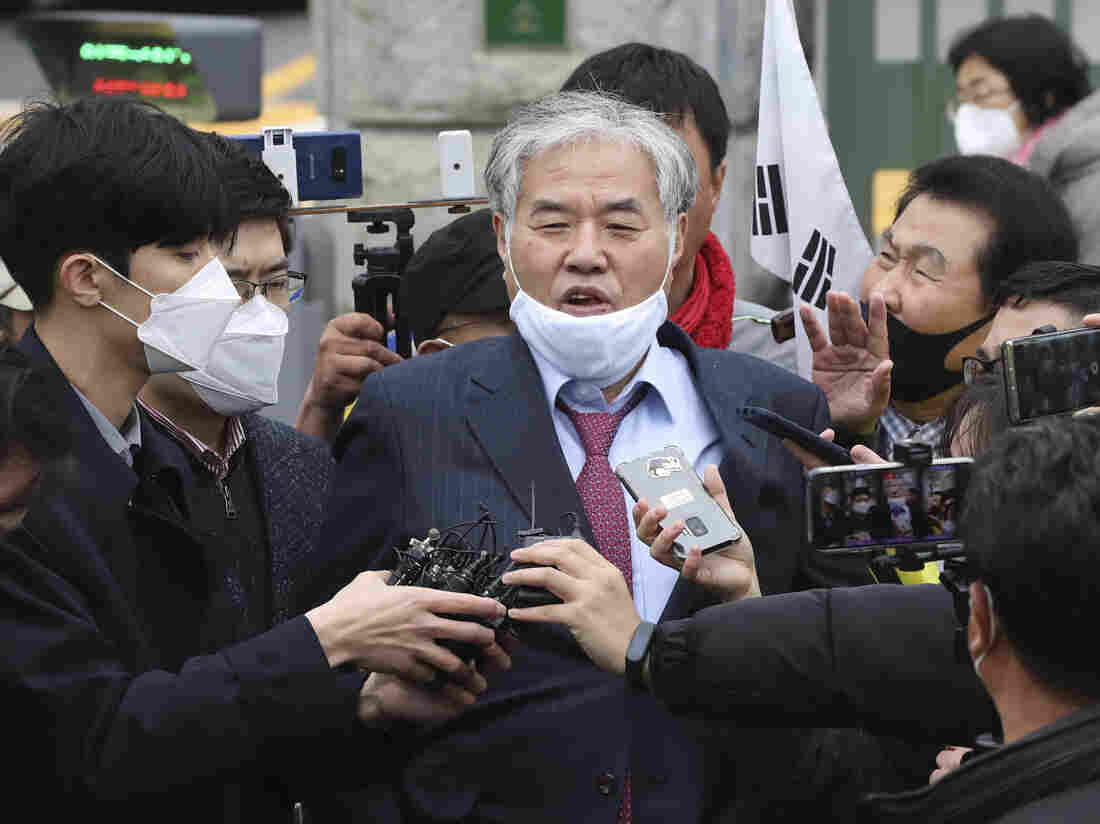 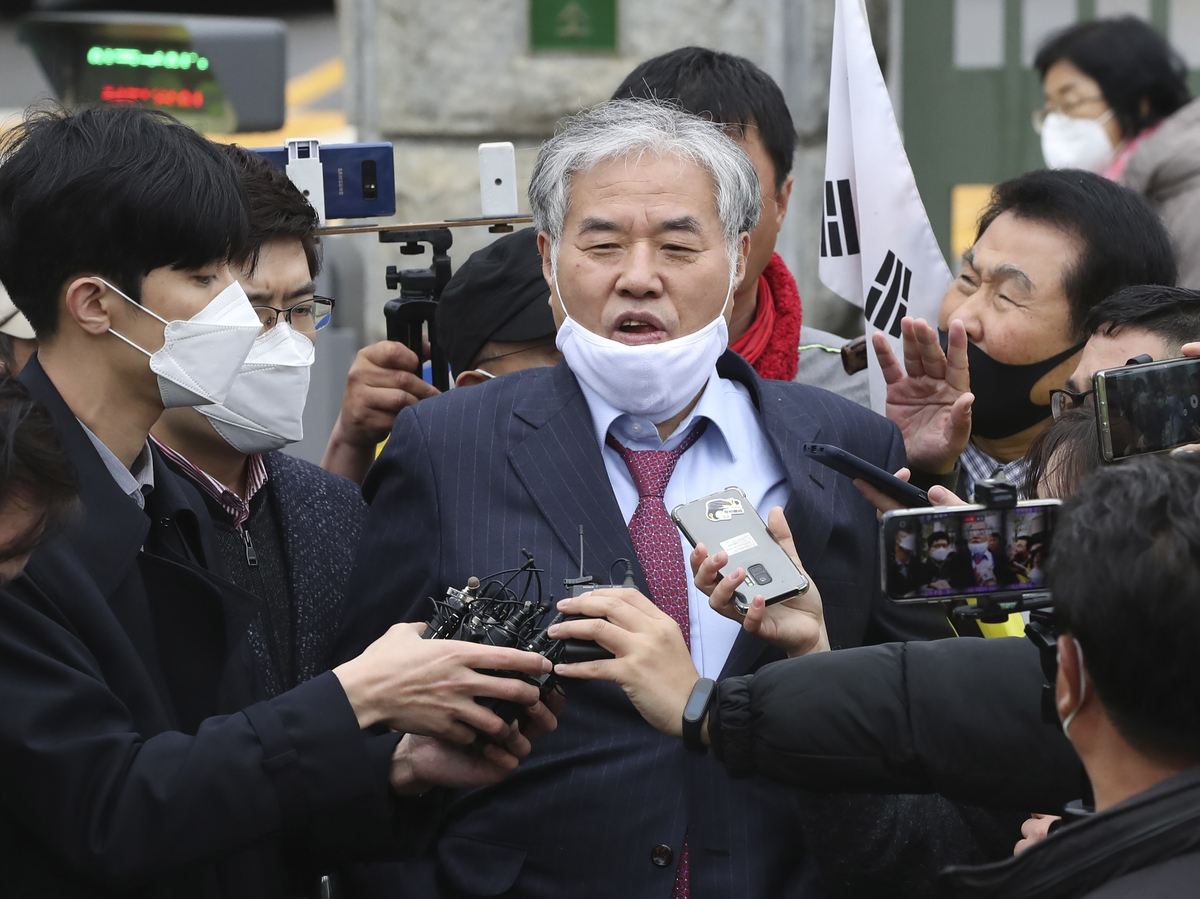 Authorities have linked more than 1,100 cases of infection — including Jun and 60-year-old Noh, who is now a deaconess — to the Sarang Jeil Church. The numbers are second only to those linked to the Shincheonji Church of Jesus, a nationwide organization whose 5,200 cases were at the center of South Korea's first wave of infections in February.

Seoul city authorities say the Sarang Jeil Church failed to provide complete membership lists, prompting police to raid its headquarters. Some members refused to get tested. Some questioned the accuracy of the tests, and others fled quarantine after testing positive.

The clash between the church and the government over disease control has become the latest flashpoint in a wider conflict between a right-wing coalition, including fundamentalist churches, and the liberal administration of President Moon.

"Christian fundamentalism has been the mainstream of South Korea's Christianity, which has been very political since its early days," observes Kim Jin-ho, a pastor and researcher at the Christian Institute for the 3rd Era, a Seoul-based religious research institute.

That fundamentalism includes a tradition of charismatic preachers like Jun Kwang-hoon, who trace their roots back to Protestant American missionaries who worked in Korea more than a century ago.

Jun also led prayer rallies on the streets, with crowds of followers dancing in a state of religious ecstasy and speaking in tongues.

"They are not there for money or benefits," Noh says proudly. "When they are there, the Holy Spirit inside them dances."

Jun built up his following among older, lower-income South Koreans like Noh in the late 1990s, Kim says. Many of them had moved from the countryside to the cities beginning in the 1970s. Then, some two decades ago, as other Protestant churches began to target affluent urban professionals, Jun's following strengthened amid an increasing sense of alienation among the less privileged.

"These people took the ostracization they experienced amid the changes South Korean Protestantism went through in the late '90, and turned it into a political holy movement led by Jun Kwang-hoon," Kim says.

Noh, dressed plainly, carrying bags of journals about her religious life and wearing a face mask as she speaks with NPR in a residential neighborhood near the Sarang Jeil Church, says she's not terribly concerned about her material well-being.

"Our pastor tells us, 'Don't bet everything on 100 years of good life here on this Earth'," she explains. "Instead, invest in the heaven up there."

Many pastors of small churches in South Korea subsist on donations from members, Kim says, which they're unable to collect now because the government has required them to move religious services online during the pandemic.

This situation "creates an economic burden on the churches, which makes the churches strongly resist the government's recommendations," Kim says.

"Undermining the credibility of all of Korea's churches"

Authorities accuse Jun and his followers of attending a banned anti-government rally last month, to which more than 500 COVID-19 cases have been linked. Jun was among those who tested positive for the virus after the rally.

Jun and his followers in turn accuse the government of intentionally infecting church members with the coronavirus — and faking COVID-19 test results to frame them as the epicenter of the current wave of infections. As of Tuesday, South Korea had nearly 24,000 cases; it had almost 15,000 on Aug. 12, when the first church member tested positive.

In a speech last month, President Moon said the church should apologize to the public instead of spreading conspiracy theories.

"The lack of common sense among a very small group," he said, "is undermining the credibility of all of Korea's churches."

Noh, who has recovered from her COVID-19 infection, insists that Sarang Jeil Church members have cooperated with the government's disease control efforts, including by telling members to stay home and get tested.

She also insists that her patriotism is a natural result of her religious convictions and that by holding street prayer rallies and demonstrations, she and her church are just trying to prevent Moon, who has worked to improve relations with North Korea, from taking the country down the wrong path.

"The gospel cannot coexist with communism," Noh says. "We're still in conflict with North Korea, and there are remnants of North Korean sympathizer, leftist forces in this country."

She believes that South Korea was meant to embody the vision of Syngman Rhee, a U.S.-educated Christian who became the South's first president in 1948. He envisioned South Korea "standing on the four pillars of liberal democracy, free market economy, the alliance with the U.S., and a Christian state," she says.

Noh is bitter that South Korean media coverage of the Sarang Jeil Church, including Christian media coverage, has been overwhelmingly critical, while ignoring, she says, the suffering of church members.

Noh also complains that after she tested positive for the coronavirus, she felt that Seoul city and public health officials "treated me like a ball of germs, not a citizen of the country. I was so angry."

NPR's Se Eun Gong contributed to this story from Seoul.