Accessibility links
4 Differences In How Biden And Trump Campaign Right Now While the Trump campaign has resumed rallies and is trying to project normalcy, the Biden campaign has stuck with small events to emphasize the ongoing threat of the virus. 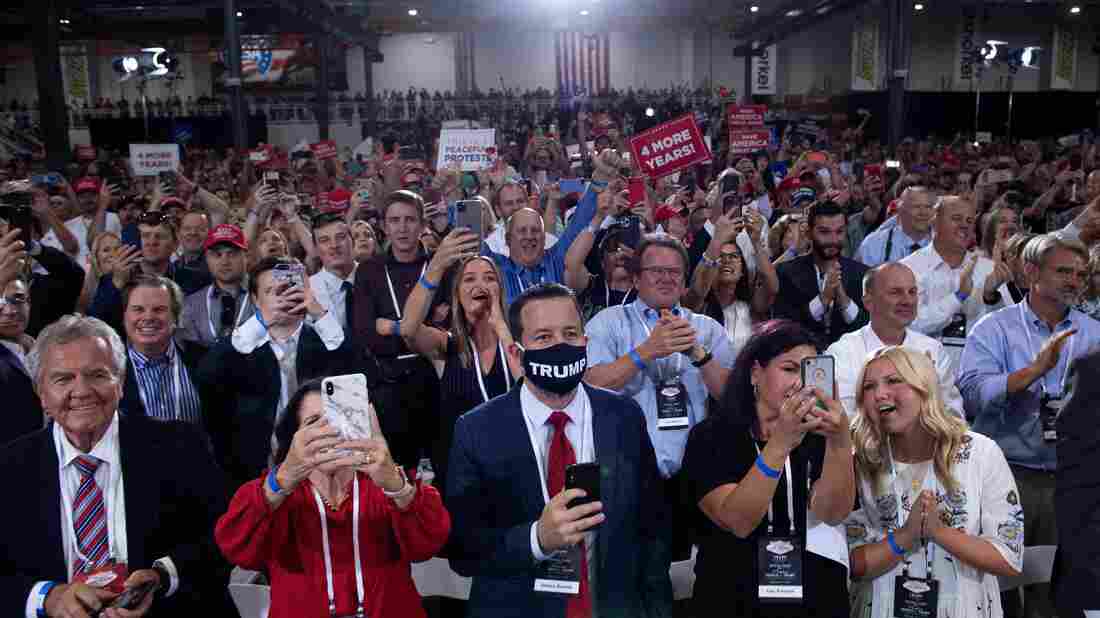 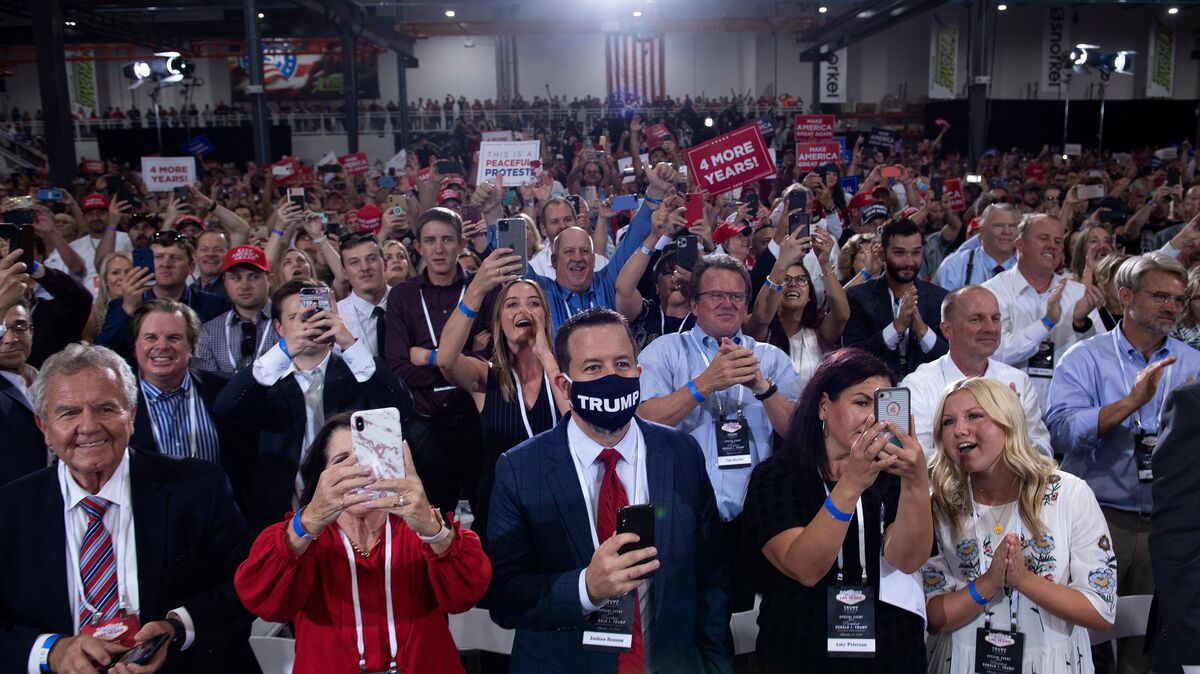 People filed indoors for a massive gathering in violation of state guidance. There was no social distancing, and mask use was uneven.

President Trump's rally Sunday in Nevada underscored the differences in how he and Joe Biden are approaching campaigning in the presidential race's final weeks.

The Trump campaign is again hosting big rallies and boasting about its door-to-door canvassing — much like in any other presidential election year. The Biden campaign, meanwhile, has stuck with a combination of smaller in-person stops and speeches and mostly remote organizing, stressing public health amid the coronavirus pandemic.

Here's a look at how their campaigns differ right now:

Sunday's event was Trump's first large indoor rally in three months. In June, he attempted to resurrect the boisterous arena events that are a hallmark of his campaign with a rally in Tulsa, Okla. It was the first big rally since the start of the pandemic.

But after the overflow crowds the campaign predicted never materialized and public health officials said the indoor event likely spurred a coronavirus outbreak, the campaign abandoned the rallies for a while.

Recently, Trump has been moving back into the format, often at airports outdoors. Last week, he hosted a rally at an airport hangar in mid-Michigan, attended by thousands of mostly mask-less supporters packed together sardine-style.

About Sunday's indoor rally, Trump's campaign cited the First Amendment right to assemble, and said every attendee got a temperature check before admission and was given a mask and encouraged to wear one.

Trump said he felt safe. "I'm on a stage and it's very far away," Trump told the Las Vegas Review-Journal. "And so I'm not at all concerned." 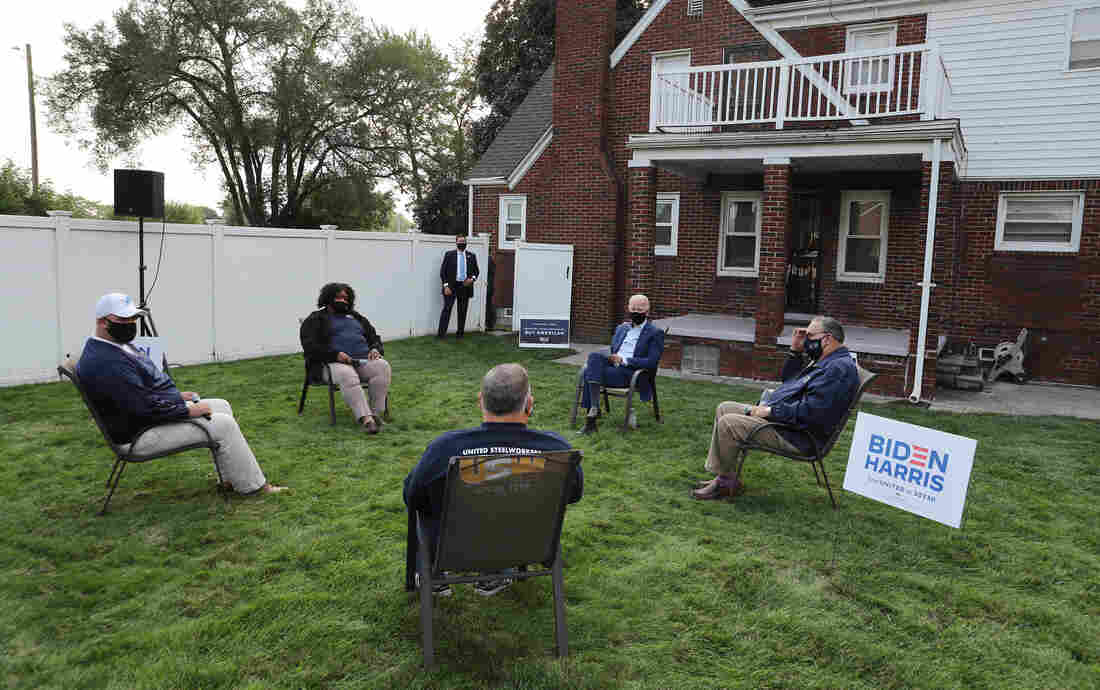 While the Trump campaign tries to project normalcy to bolster the administration's message about its handling of the coronavirus, the Biden campaign — which is ahead in current polling — has not hosted any traditional rallies since March, and its in-person campaigning has emphasized the ongoing threat of the virus. Instead, the former vice president and his top surrogates have relied on prepared remarks, often with journalists making up most of those in attendance; roundtable discussions with a handful of voters, often in a backyard; and retail-type stops at local businesses.

Both campaigns have upped their travel in recent days. While for most of the summer Biden stayed close to home, campaigning from Delaware or neighboring Pennsylvania, he is increasingly hopping on a plane for events in key swing states. For instance: Two weeks ago Biden traveled to Kenosha, Wis., last week he was in Macomb County, Mich., and Tuesday he's in Florida.

The Biden campaign suspended in-person canvassing at the beginning of the pandemic and has stood by that approach, saying it doesn't want to put people at risk of contracting COVID-19. Meanwhile, the Trump campaign says volunteers knock on 1 million doors a week as it touts its ground game.

The Biden campaign says conversations matter — no matter the medium. And it says it recorded 2.6 million conversations with swing state voters in August, mostly by phone or text message. While the campaign plans to resume dropping off literature door to door, canvassers likely won't seek out face-to-face conversations with voters on stoops and front porches.

Though down-ballot Democrats followed suit for most of the pandemic, a handful of candidates in tight races are now breaking with the Biden campaign and resuming door knocking. That's true in Maine, where state House Speaker Sara Gideon is trying to knock off Republican Sen. Susan Collins, and in Montana, where Gov. Steve Bullock wants to unseat Republican Sen. Steve Daines.

In recent weeks, some Democrats have reportedly pressed the national party to begin canvassing again, but deviation from the current strategy could dent the Democrats' message about what a responsible campaign looks like in the time of COVID-19.

Again, the Biden campaign is sticking with virtual, while Team Trump is back to in-person events.

Since the pandemic began, the Biden campaign has shifted to virtual fundraisers, typically held over Zoom. The president, however, held several in-person fundraisers over the summer in addition to virtual events.

For Democrats, the shift to virtual hasn't slowed the flow of cash.

The Trump campaign, the Republican National Committee and their joint fundraising efforts reported raising $210 million that same month. The figure would have set a 2008 record for fundraising in a single month — if not for the massive haul reported by the Biden campaign that blew the previous record out of the water.

The Trump campaign had maintained a fundraising edge over its Democratic rival. A report in The New York Times last week detailed massive spending that's dwindled the campaign's resources.

The Biden campaign is currently outspending Trump on television as both campaigns zero in on six key states: Arizona, Florida, Michigan, North Carolina, Pennsylvania and Wisconsin.

Trump campaign staffers have continued to report to work through most of the pandemic, while the Biden operation has been mostly working remotely for the last several months.