Accessibility links
How Edward Colston's Statue Removal Has Divided Bristol : Code Switch How did a police killing in Minneapolis lead people thousands of miles across the Atlantic Ocean to pull down the statue of a slave trader who's been dead for nearly three centuries? On this episode, we're going to the city of Bristol to tell the surprising story. 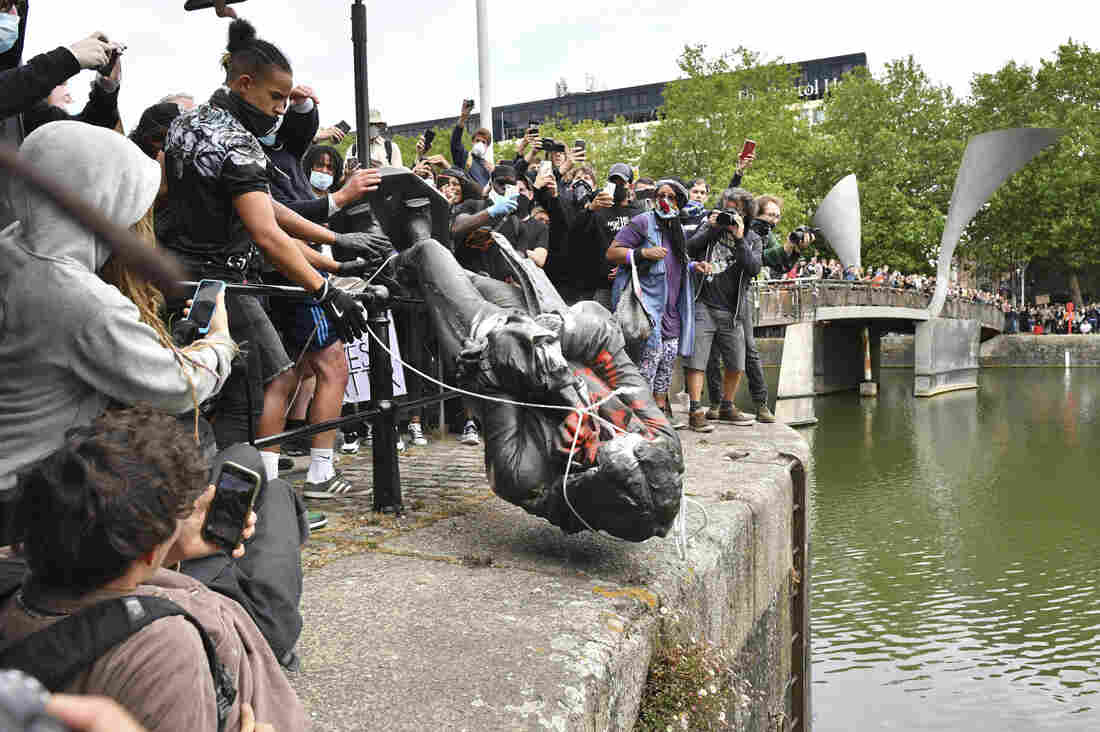 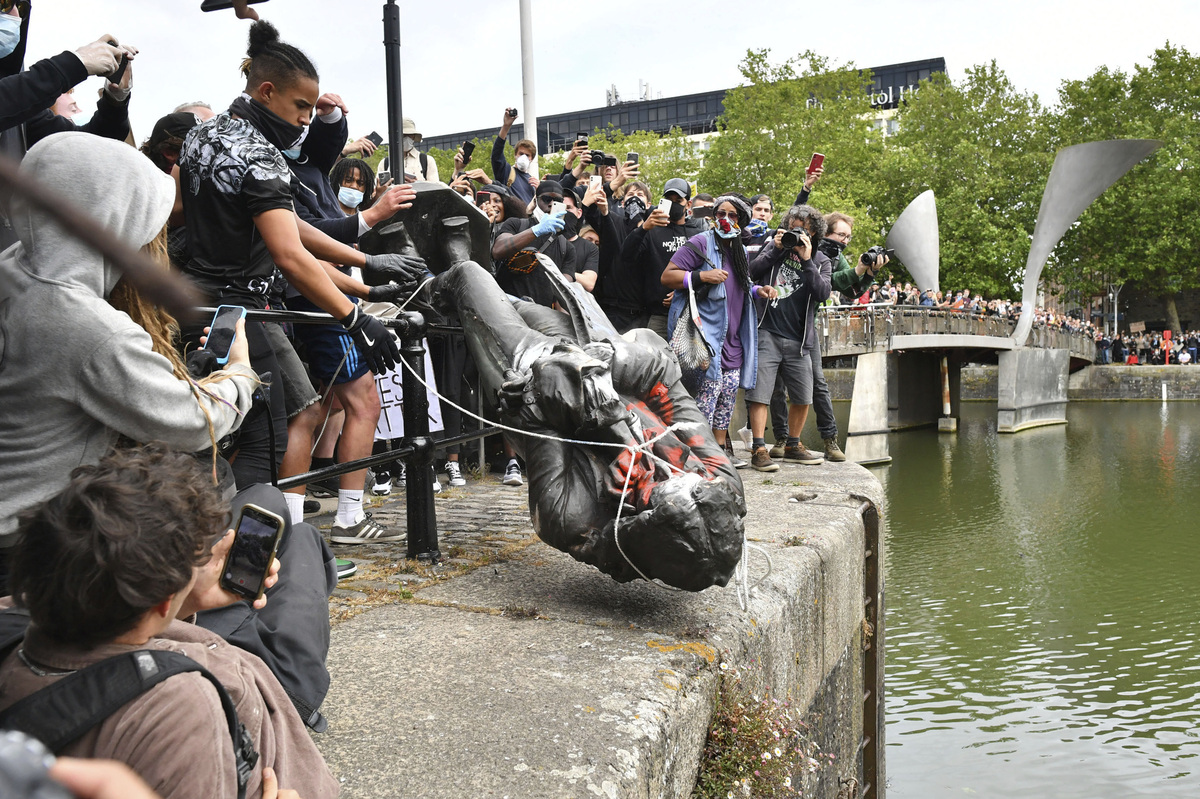 BRISTOL — How did a police killing in Minneapolis in May lead people thousands of miles across the Atlantic Ocean to pull down the statue of a slave trader who's been dead for nearly three centuries?

Two weeks after the killing of George Floyd, crowds inspired by Black Lives Matter protests in America marched to the statue of a slave trader named Edward Colston in the center of the English port city of Bristol. They wrapped ropes around the neck of the bronze effigy, pulled it to the pavement, rolled and dragged it through the streets, and then pushed it into the harbor.

"It was a feeling of euphoria, excitement," said Michael Jenkins, a filmmaker who documented the protest, describing how the crowd set upon Colston's statue. "It was very emotional . . . seeing people jumping on the statue, screaming like, 'this is for our ancestors.'"

Colston was Bristol's biggest philanthropist. His name adorned the city's concert hall, an office tower, as well as schools and streets. The plaque beneath the statue, which was erected in 1895, called him "one of the most virtuous and wise sons" of Bristol. What it failed to mention – and what angered the protesters – is that Colston made much of his fortune with the Royal African Company, which shipped tens of thousands of enslaved people across the Atlantic to work on plantations during Colston's tenure. An estimated one in five people died during the crossing.

Michael Jenkins said the killing of George Floyd by a police officer is a reminder of the past. "It just brings back all the things that you're taught about as far as the state versus Black people around the world." 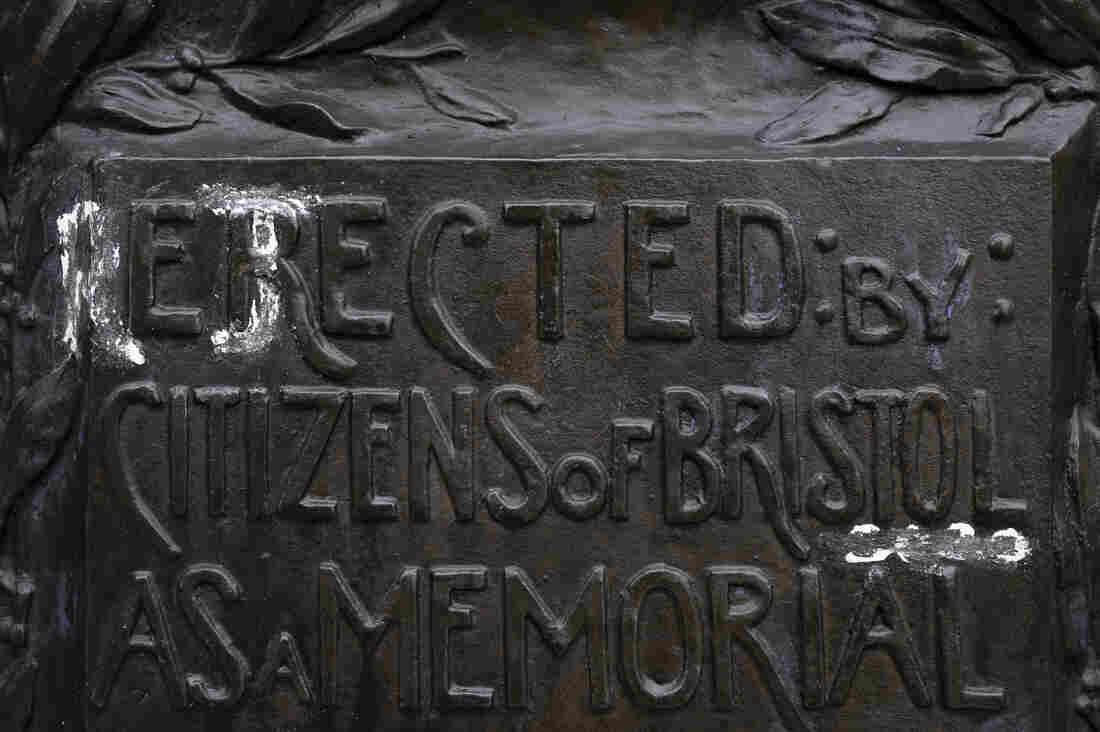 A close-up of a plaque changed to read "rejected by the citizens of Bristol" on the Edward Colston statue plinth on July 15, 2020. Matthew Horwood/Getty Images hide caption

Bristol Mayor Marvin Rees, who is mixed race, didn't support protesters tearing down the statue, since it was against the law. But he wasn't sad to see it go, either.

"The statute was an affront to me," said Rees, whose father came from Jamaica and whose mother is a white Briton. "It is possible that Colston had owned, kidnapped and made money off of one of my ancestors."

The toppling of the statue has been a divisive issue in Bristol, a liberal-leaning city with a majority-white but increasingly diverse population. A reader poll in the Bristol Post found about 60% of respondents backed protesters pulling down the statue, while around 40% thought it shouldn't have been toppled.

It's been even more controversial throughout Britain, where Black people only make up about 3% of the population. A YouGov poll found that about half of respondents wanted the statue taken down, but most of them objected to the way it was done.

Desecration Of Statues With Racist Connections Triggers White Protests in the U.K.

"Outrageous," is how Duncan Smith, a white Bristolian pub owner, described the toppling. Smith is no fan of Edward Colston, but he said he could not see the connection between the killing of George Floyd and the 17th century slave trader. "People couldn't believe that there was a protest of 10,000 people in Bristol because of something that happened in Minnesota," said Smith. "It was a horrific crime. It was outrageous, but to take that across the Atlantic, that's where the logic stops for me."

Smith also criticized the police for not stopping the demonstrators from pulling the statue down. He worries that cops are giving a green light to activists of all stripes to disrupt public life or get rid of pieces of history they don't like. 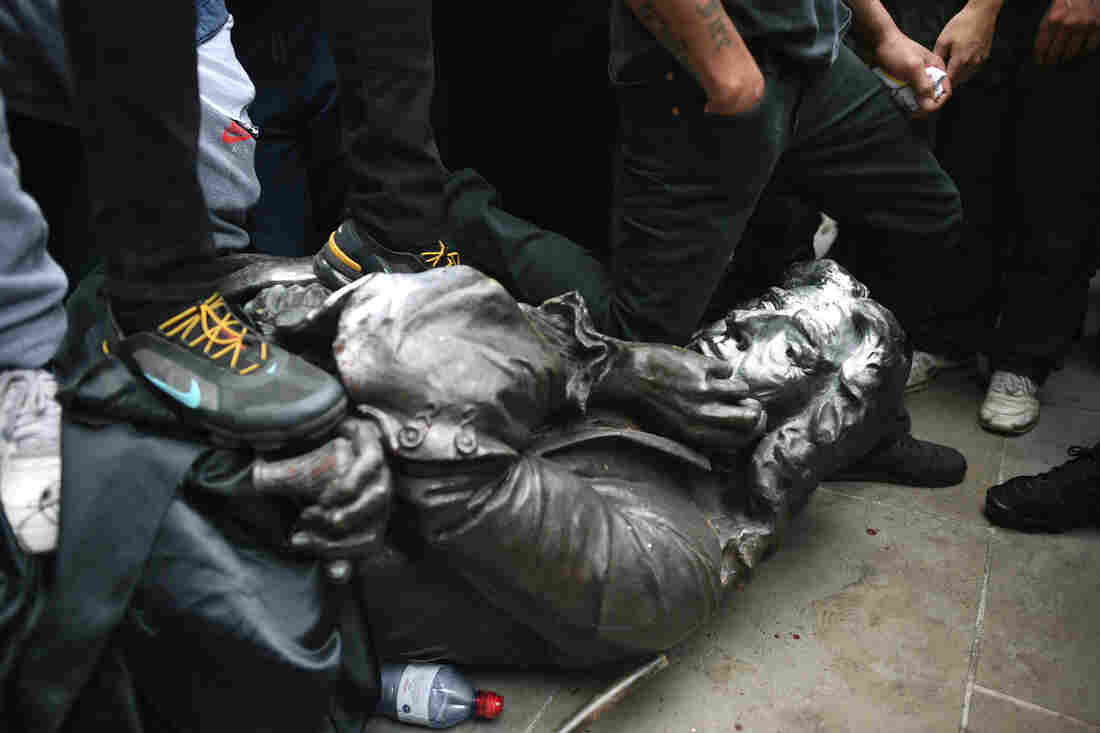 Protesters stand atop the statue of Colston, shortly before they push the effigy into the harbor. Ben Birchall/AP hide caption 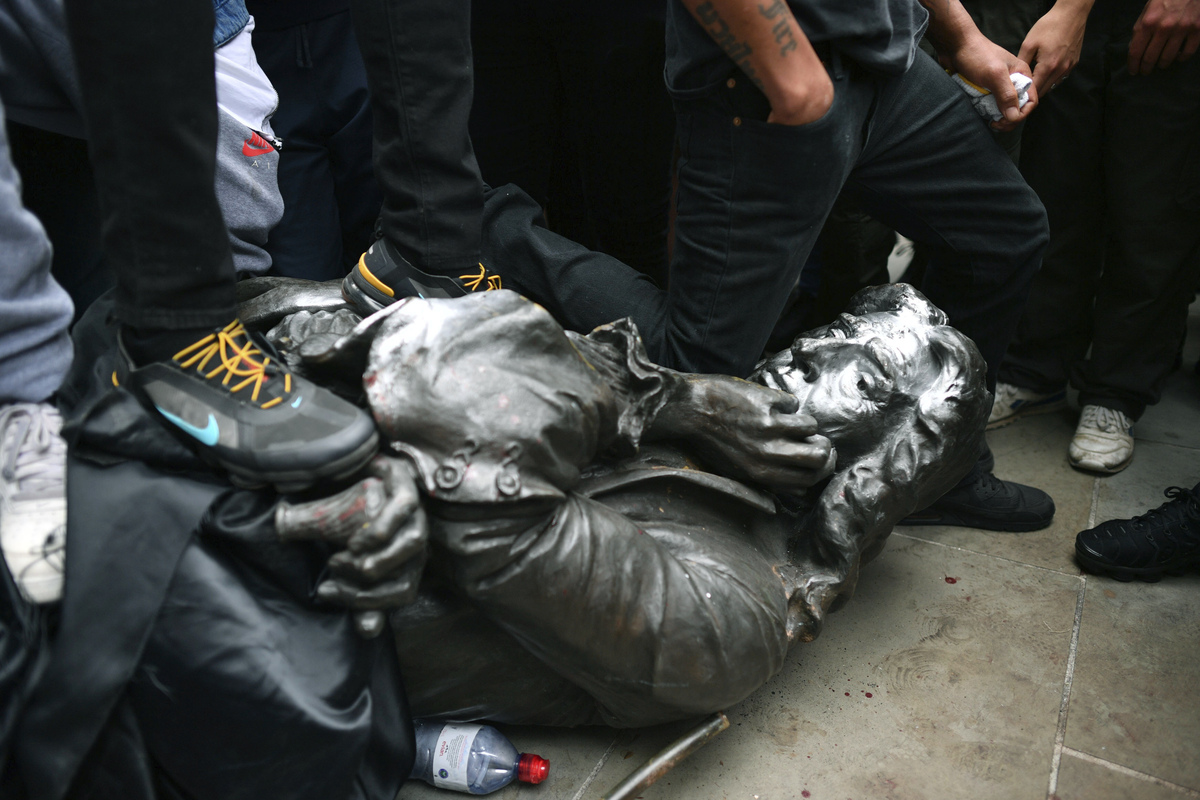 Protesters stand atop the statue of Colston, shortly before they push the effigy into the harbor.

"It seemed to me that they [the police] were merely complicit," said Smith. "I think they were cautious and scared. They're afraid of being seen on one side of the argument than the other."

Superintendent Andy Bennett, Bristol's police commander, sees the issue differently. He says the statue came down so quickly that officers didn't have time to react. And even if they had, it could've resulted in a violent clash with protesters.

Bennett said he was following a basic British concept that distinguishes law enforcement here from the United States: policing by consent. Under that approach, which underpins modern policing here, the most important thing is not to enforce the letter of the law at all times, but to keep the peace and minimize harm or injury to citizens.

In UK, Police Response To Protests For Racial Equality Is Markedly Different

"We can only . . . police well, if we have the majority of the public on our side," he explains. "What we've got to decide is when we choose to uphold that law. And we decided that the public peace — the 'Queen's Peace,' as we call it in England — was more important than one statue."

Bennett says that does not mean people can break the law without consequence. Afterwards, police used video footage to identify some of the perpetrators and brought them in for questioning. The case has not yet been resolved.

This lighter touch helps explain why anti-racist protests here in June were generally more peaceful than in parts of the United States. When protests broke out in British cities over the death of George Floyd, there weren't images of police firing tear gas into crowds or pushing elderly protesters to the pavement.

Bristol Mayor Marvin Rees, who has lived in Washington and Philadelphia, has had his own unnerving experiences with American police. He said he was flabbergasted when a cop in the U.S. once threatened to arrest him for jaywalking. Another time, he said, an officer pulled him over after his wife – who is white and from Boston — drove diagonally through an empty parking lot at night at a gas station in New Jersey. After that, Rees says, he changed the way he dealt with police in the U.S. When asking for directions in New York City one day, he made sure to speak as he took care to approach an officer from the front.

"I made the calculation that he's going to perceive me as a threat," Rees said. "I knew he needed to hear my English accent."

Afterwards, Rees returned to his wife and said: "Is that what it means to be white?"

Of course, American police have more to fear than their British counterparts, since there are more guns in America than people. Last year, forty-four officers in the U.S. were shot to death. By contrast, the United Kingdom has strict gun laws. The last time an officer was killed with a firearm here was 2012.

In the months since protesters toppled the Colston statue, there has been change in Bristol. Workmen took down the letters on Colston Tower, a high-rise building, and residents painted over street signs bearing Colston's name. Some things, however, may be too big or too costly to change. 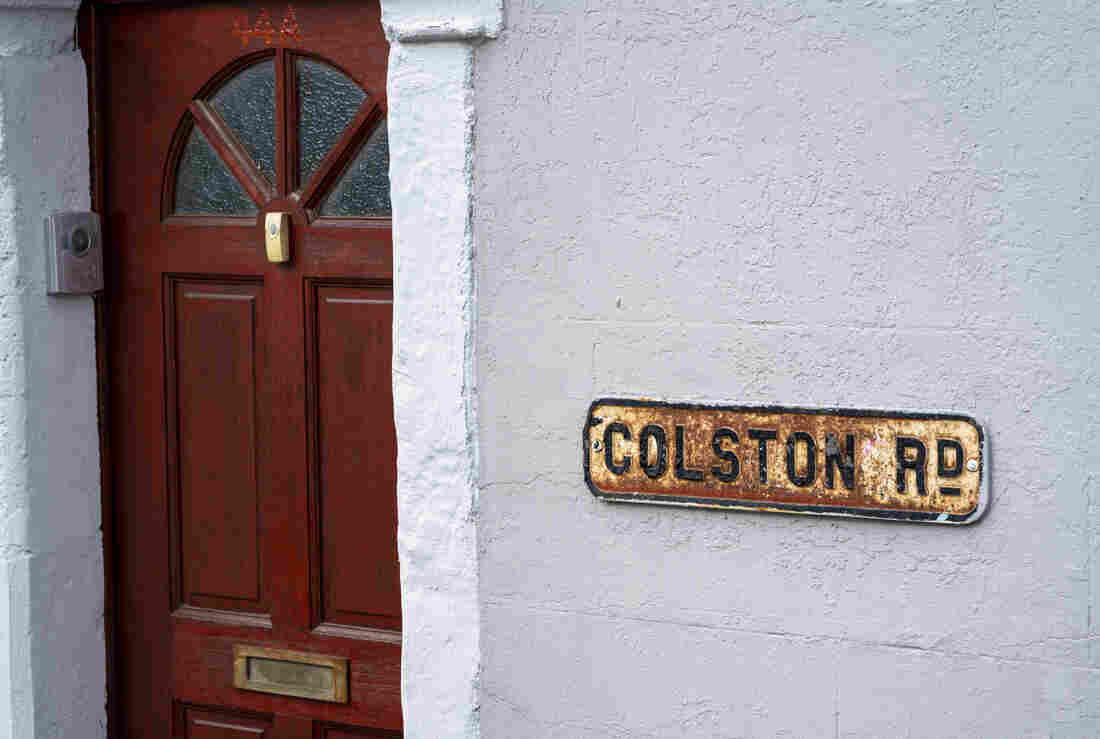 A close-up the Colston Road sign on June 16, 2020 in Bristol. The city's mayor has since announced the setting up of a commission of historians and academics to reassess Bristol's landmarks and buildings that feature the name of Colston and others who made fortunes in trades linked to slavery. Matthew Horwood/Getty Images hide caption

St. Mary Redcliffe, a parish church in the city, has removed four panels from a stained-glass window that commemorated Colston and celebrated his motto, "Go and do thou likewise," taken from the story of the Good Samaritan. But taking out those panels hasn't satisfied everyone; Vicar Dan Tyndall says some people want the entire stained-glass window to come down. The problem? It's at least six stories high and would cost about $27,000 to remove.

Tyndall understands why Colston's prominence in the city has pained many Black residents, but he thinks that money might do more good helping people in his parish, who are struggling from job loss due to the coronavirus-driven recession.

"The parish that we serve is one of the poorest in the country," Tyndall said. "So, we're going to be faced with the challenge of sorting out our history and sorting out how we can help people in this day and age now with not having enough to eat."

Meanwhile, the pedestal which held the Colston statue for nearly 125 years remains a flashpoint in the heart of Bristol. In July, a London sculptor had his own statue hoisted up on the pedestal. It depicted a Black female protester holding her fist up in a Black power salute. Crowds soon gathered. Debate and argument followed. 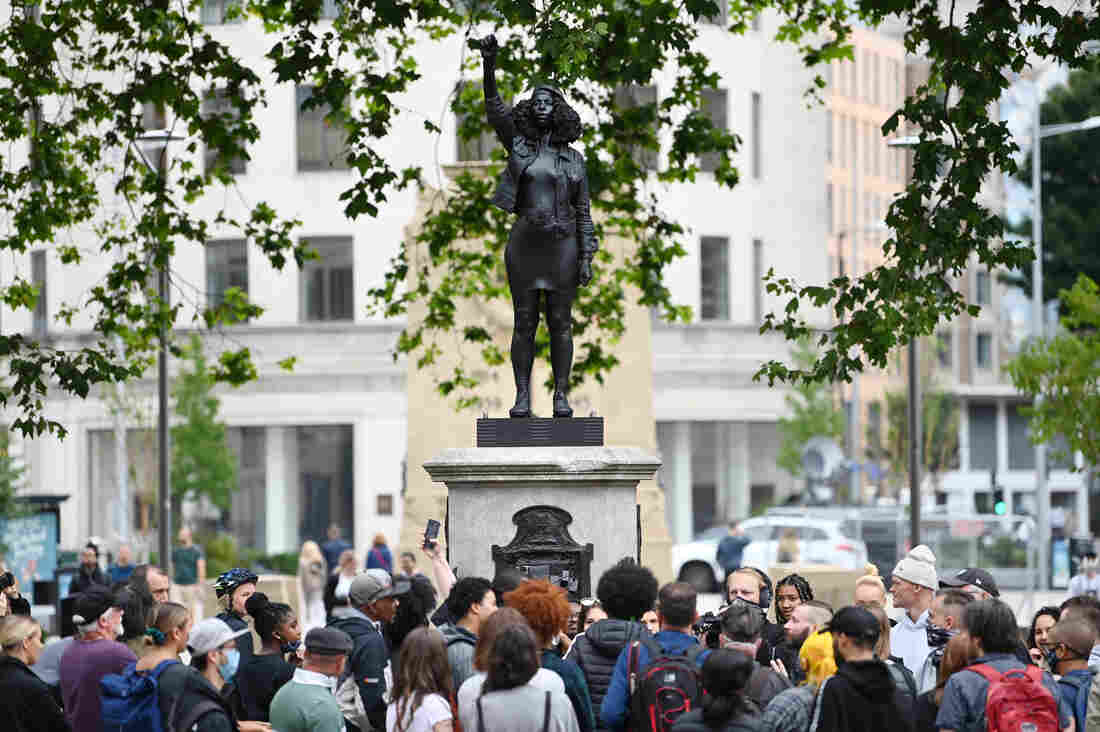 Some white residents were doubly angry. They were still mad that the Colston statue had been pulled down illegally and that another statue had gone up without government authorization or public input.

"What they've done today is created more tension in the city," added Roy Banks, who is also white and works at the port here.

Mohamed Aidid, a university student of Somali descent, saw the new statue in a completely different light. "I think it's beautiful," Aidid said. "It stands for so much that Bristol has needed. When I walked past here today, I finally felt like it's not a direct insult to my humanity, to my life."

The next morning, government workers unbolted the statue and took it down, leaving the pedestal empty, once again.

Mayor Rees said that whatever eventually replaces the Colston statue will be decided through a deliberative process with public input. Personally, he says, he'd like to see a memorial to people who stood up for the poor, marginalized and oppressed in the city — the people he calls Bristol's "true heroes." But Rees says the empty pedestal feels appropriate at this moment in Bristol's history, a powerful symbol of a city at a crossroads.

To learn more, listen to this week's Code Switch episode wherever you get your podcasts, including NPR One, Apple Podcasts, Spotify, Pocket Casts, Stitcher, Google Podcasts and RSS.