Accessibility links
Swing State Map Tightens, But Biden Still Leads Trump The big change is that Florida has gone from leaning in Joe Biden's direction back to its traditional spot as a toss-up state.

It looks, for now, like President Trump has bounced back a little after bottoming out.

The president was at a low point against former Vice President Joe Biden, but in the past month, even though Biden still has an edge, the landscape has tightened some, according to the latest NPR Electoral College analysis.

The biggest change is that Florida has tightened in the month and a half since our last analysis and is back in the toss-up category. This means that including states leaning toward Biden, he is just below the 270-vote threshold needed to win the presidency. Currently he has a 268-to-169 advantage in the Electoral College.

We've made only a few changes, but one important one: Florida moves back to its traditional spot as a toss-up state. While Biden maintains a slight lead there, Trump has gained about 4 percentage points in polling averages since the end of July.

A new Monmouth University survey in Florida has Biden up 5 points among registered voters, and an NBC/Marist poll there has the race deadlocked at 48% apiece among likely voters.

The surveys showed contradictory findings when it came to Latinos. Monmouth had Biden with a large lead among Latinos but still underperforming what Hillary Clinton got with the group in 2016. That's something reflected on the ground as well, as Democrats there are concerned with being able to register enough Latino voters amid the coronavirus pandemic.

Both surveys showed Trump and Biden splitting seniors. That's bad news for Trump, given that he won them by a wide margin in Florida in 2016. That's something Republicans are worried about — not just in the presidential election but down ballot as well.

Biden underperforming with Latinos but overperforming with voters 65 and older has been something seen consistently this year. How those unpredictable shifts wind up playing out is unclear and could mean volatility for which voters turn out. 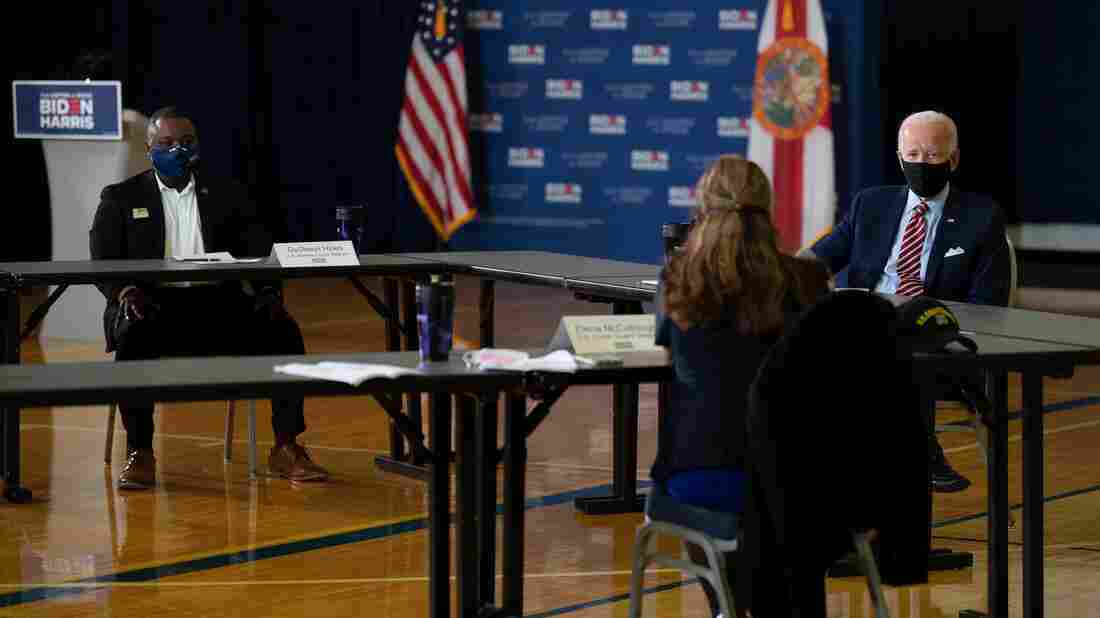 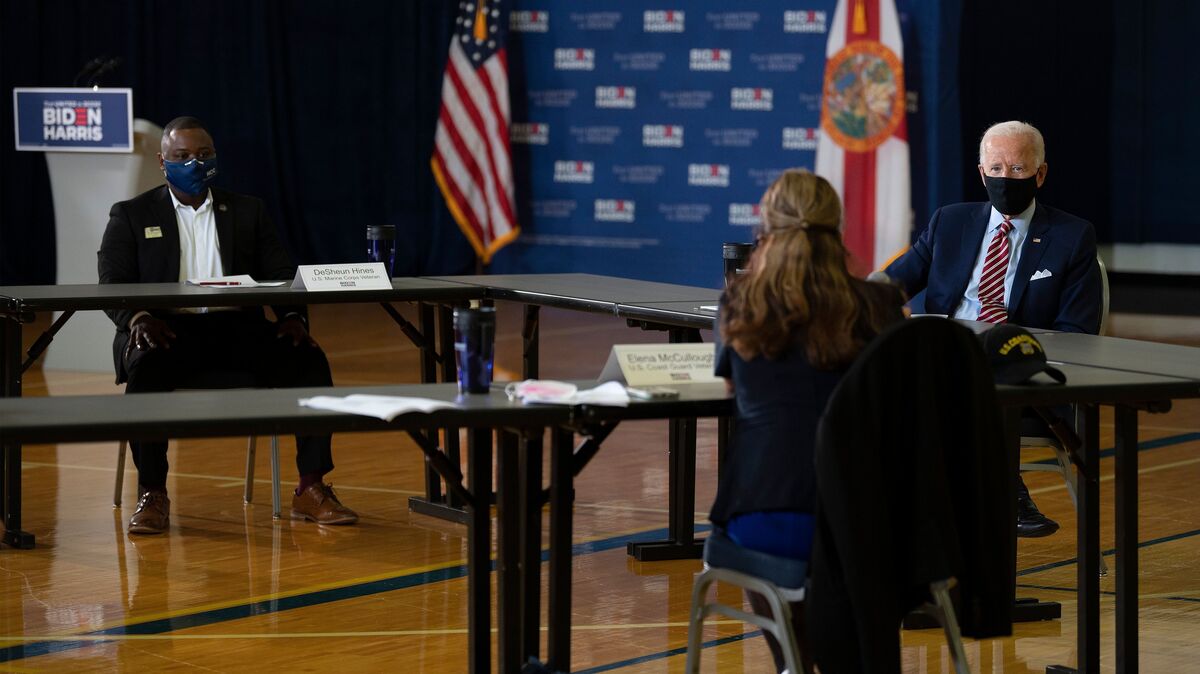 Democratic presidential nominee Joe Biden speaks in Tampa, Fla., on Tuesday during a roundtable discussion with veterans and military families.

Trump won Nebraska's 2nd Congressional District by 2 points in 2016. Second lady Karen Pence and Lara Trump, the wife of Trump's son Eric, stumped for the president in this Omaha-area district in the past month. Democratic sections of the district have been registering Democrats since 2016 faster than Republicans have been doing so in right-leaning areas. And the congressional race there right now is neck and neck.

Demography continues to trend Democratic in Virginia. In a shift from 2016, there are now almost as many whites with a college degree as without in the state, as the population of Asian Americans also continues to grow. New Mexico has also trended Democratic, with 40% of voters in the state being Latino in 2016, according to exit polls.

In both states, Biden has a double-digit lead in an average of the polls.

What we didn't change

Arizona remains Toss Up, but Biden has an edge

Biden has led in Arizona since March, but his margin is still pretty narrow. There haven't been a ton of good polls, though a Fox News poll had Biden up 9 points with likely voters. If other polls show similar results, it could be a state that moves to the Lean D column.

Not much has changed in Georgia. The state remains close. Biden was ahead narrowly in mid-July, but now Trump is ahead, reverting to where things were earlier in the year.

Iowa has moved a couple of points back in Trump's favor on average, though Trump and Biden are within 2 points of each other. While the polls indicate a statistical tie, Trump won here, and it's a state with a high white, non-college-educated population, giving Trump an advantage for now. 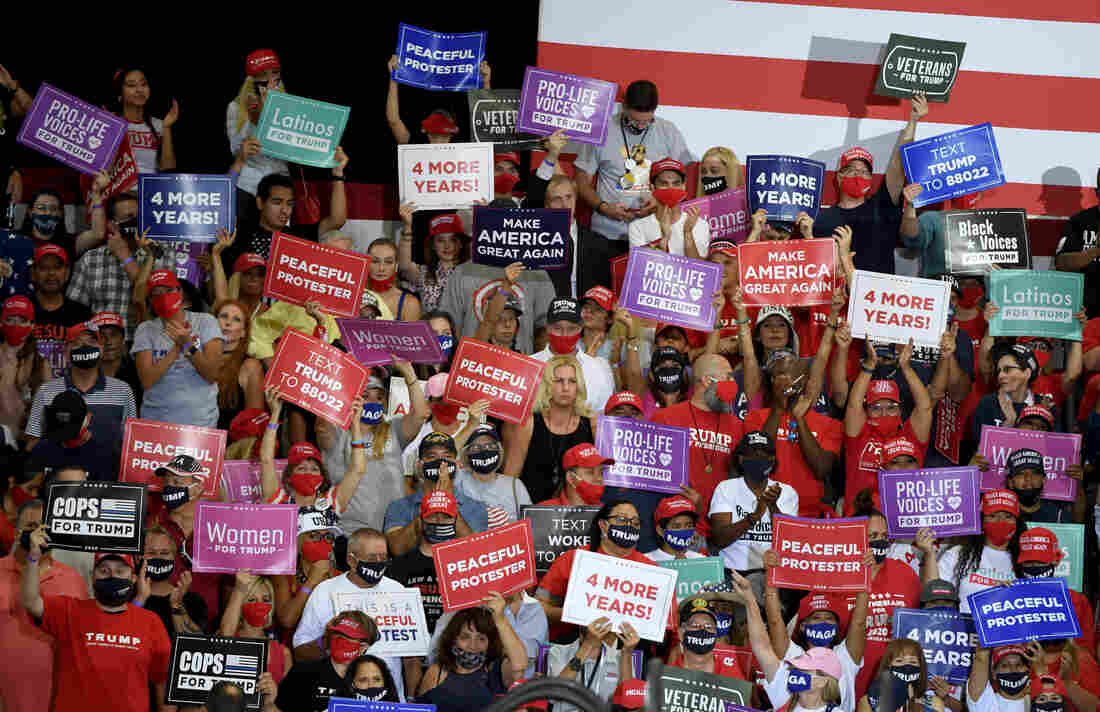 Supporters of President Trump hold up signs during an indoor campaign event for him on Sunday in Henderson, Nev. Nevada is a state that Democratic presidential candidate Hillary Clinton won in 2016 but that Trump is trying to flip. Ethan Miller/Getty Images hide caption 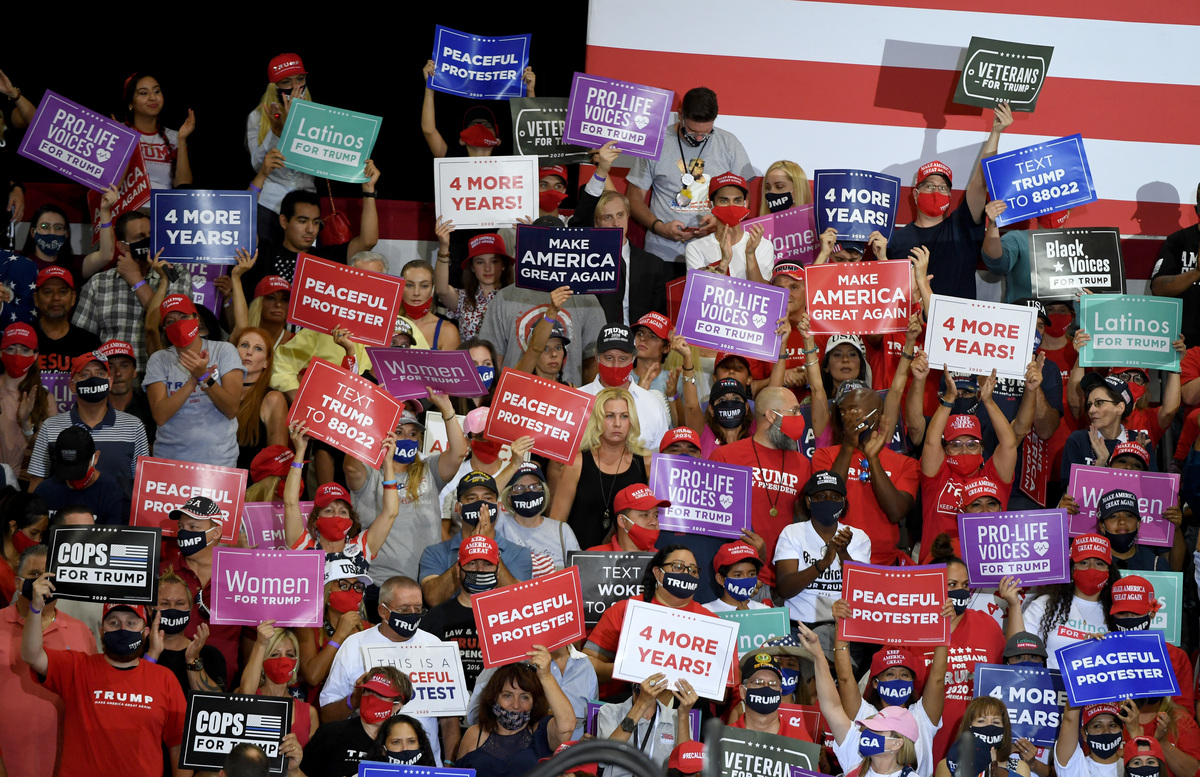 Supporters of President Trump hold up signs during an indoor campaign event for him on Sunday in Henderson, Nev. Nevada is a state that Democratic presidential candidate Hillary Clinton won in 2016 but that Trump is trying to flip.

There hasn't been much polling in Ohio, but Trump has gained about 4 points in polls over the past couple of months, giving him a very slight advantage. Trump won it in 2016, and given its high population of whites without a college degree, Ohio remains a state where Trump may have an edge.

The average of the polls shows that the race has tightened by a few points but that Biden is still ahead. And better polls have shown a wider margin than the average. The tightening is something to watch to see if Trump makes more inroads in the next couple of weeks.

Trump and Biden are statistically tied in Texas, according to the polls. And Biden continues to outperform where Clinton was in 2016. But there hasn't been a lot of good polling in the state this cycle; no Democrat has won the state in a presidential election since 1976; and Texas hasn't elected a Democrat to statewide office since 1994. Let's see where the race is in a couple of weeks with better polling.

Right now, this state might be a tip of the scale to Biden, according to the polls, but a Marquette Law School poll had an interesting finding that should worry Democrats: Among registered voters, Biden was up 6 points, but among likely voters, that shrank to 4 points. With all the volatility in the state currently, its past voting performance (Trump won it narrowly) and the fact that it has one of the highest white, non-college-educated populations of the swing states, it stays in the toss-up category for now.

Other places to watch

Let's be clear: These are all still places Trump is likely to win, but it's notable about the national climate that in all three, Trump's lead is in the single digits in an average of the polls.

For more on our methodology and possible scenarios for paths to winning for Biden and Trump, check out our first Electoral College analysis from June.