Accessibility links
Parents Keep Children Home As China Limits Mongolian Language In The Classroom As it has long done with the Tibetan and Uighur languages, Beijing is reducing instruction in Mongolian in favor of Mandarin Chinese in ethnic Mongolian areas of the country. 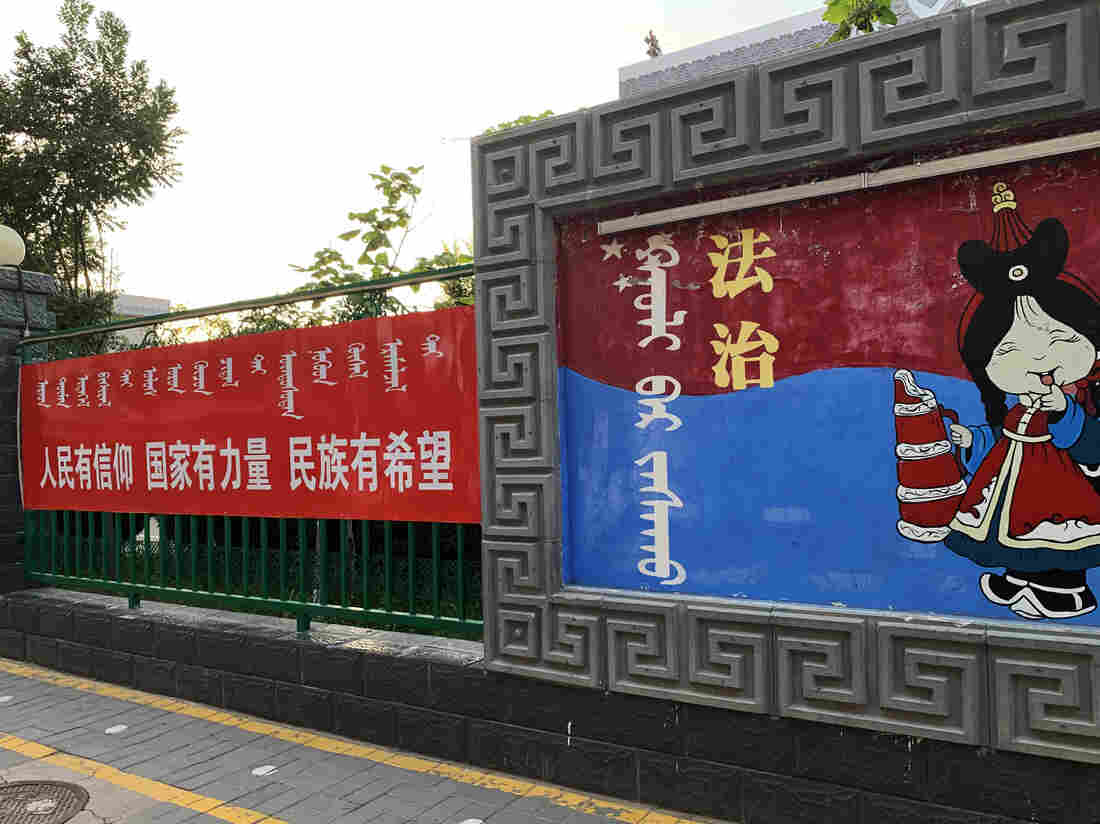 A sign (left) outside a Mongolian-language school in Hohhot, Inner Mongolia, reads: "When the people have conviction, the state has strength and the ethnic minorities have hope." The sign at right says: "Rule of law." Emily Feng/NPR hide caption 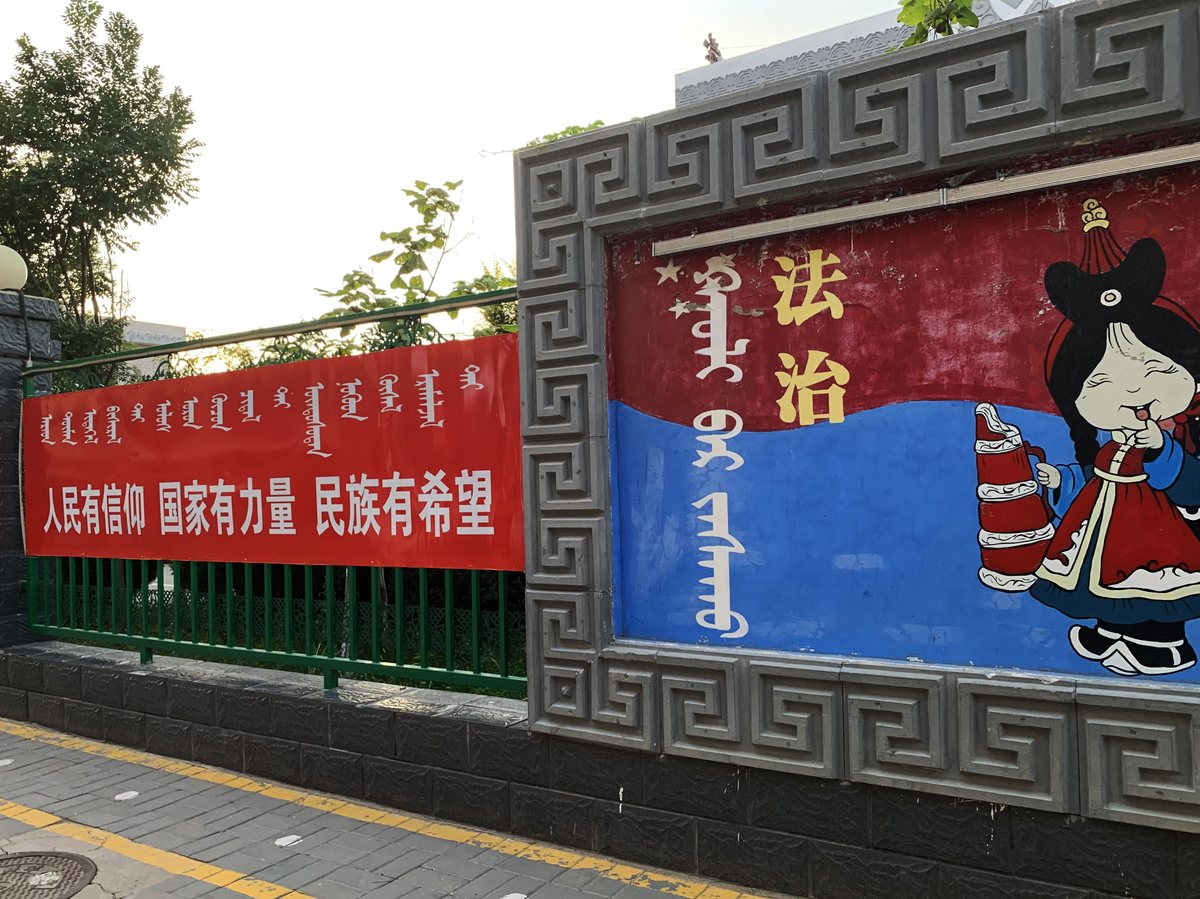 A sign (left) outside a Mongolian-language school in Hohhot, Inner Mongolia, reads: "When the people have conviction, the state has strength and the ethnic minorities have hope." The sign at right says: "Rule of law."

Early this month, parents and students across the Chinese region of Inner Mongolia streamed back to school campuses, not to attend classes, but instead to protest.

They gathered by the hundreds outside dozens of schools in rare acts of civil disobedience, protesting a new policy that sharply reduces their hours of Mongolian-language instruction. For several days, schools across Inner Mongolia stood empty as parents pulled their children out of class, the largest demonstrations in Inner Mongolia in more than three decades.

Just as quickly came the crackdown.

In Tongliao, a city of 3 million where protests were among the fiercest, residents told NPR that cars were banned from the roads for four days to stop parents from congregating. Municipal notices seen by NPR required parents to sign official statements promising to send their children to school or face punishment. Security officials in Inner Mongolia have issued arrest warrants for hundreds of parents who attended protests — complete with mug shots grabbed from surveillance cameras.

The city of Xilinhot said Wednesday that parents who sent their children to school would receive preferential access to government aid programs, according to a municipal notice seen by NPR. Those who did not would have their children expelled, and their livestock herds, which many ethnic Mongolians still depend on for supplementary income, would be inspected.

"Mongolian parents, the civil servants, party members and teachers of Mongolian descent are under tremendous pressure to send their children to school," says Enghebatu Togochog, the director of the advocacy group Southern Mongolian Human Rights Information Center. "Threats of arrest, detention, imprisonment, even confiscation of property are the most common methods of intimidation being used."

In this undated video posted by the Southern Mongolian Human Rights Information Center, students and others demand a restoration of classes in the Mongolian language.

"One very strong sense in Inner Mongolia on the part of Mongols is how much they've given up," explains Christopher Atwood, a professor of Mongolian language and history at the University of Pennsylvania.

Mongolians were the first ethnic group to declare their support for the now-ruling Chinese Communist Party in the 1940s. In doing so, they lost their opportunity for political autonomy but were granted a certain amount of cultural autonomy.

For the last seven decades, China's ethnic Mongolians have been allowed to attend school and take university classes in the Mongolian language — which has no relation to Mandarin Chinese — officially offered in six provinces and regions.

Mongolian-language education had already been diminishing in scope before the new policy. In recent years, more and more parents were voluntarily choosing to send their children to Mandarin Chinese-only schools, which afford better economic outcomes.

Official statistics from 2017 show that about 30% of ethnic Mongolian students attend a school with some form of Mongolian-language education, down from an estimated 60% in 1990.

Now China is moving toward what it calls "second generation" ethnic policy — an approach that has emerged in the last decade that demands China's minority ethnic groups become more "Chinese" by reducing or outright eliminating their limited cultural autonomy.

In the past decade, similar policy changes first targeted Tibetan- and Uighur- language education, drastically reducing the numbers of language teachers and resources available for students in those languages. The new language policy "is not a special requirement only asked of ethnic Mongolians, because regions such as Tibet and Xinjiang have already undergone the same transition," Inner Mongolia's education bureau wrote on its website.

He explains that ethnic Mongolians are an assimilation success story from the eyes of Beijing, with high rates of intermarriage with Han, the majority ethnic group in China, and high levels of Mandarin Chinese fluency. "There was a kind of peace that had prevailed for 25 years. It just seems very odd that the government would create conditions that would arouse dissent," says Rossabi.

Dissent was widespread this September. Ethnic Mongolian television anchors and language advocates posted videos encouraging parents to withdraw their students. On Sept. 1, the first day of the fall semester in Inner Mongolia, many schools stood empty as parents kept their children home.

Within days, China's police state mobilized to contain the demonstrations.

In Bairin Right Banner, a region next to the Inner Mongolian city of Chifeng, and Sonid Right Banner, to the west, authorities said elementary and middle school students who did not return to class by this week would be expelled. In Kangmian Banner, parents were asked to sign a statement pledging to return their children to school or face punishment, according to a notice seen by NPR.

Two parents in Hohhot, Inner Mongolia's capital city, told NPR that they had received nonstop calls from teachers and the school's principal pressuring them to return their children to school.

Waves of ethnic Mongolian civil servants have quit their posts rather than implement the policy. In the town of Wudan, two village Communist Party officials were fired for "creating a negative influence in the village" and "failing to follow orders," according to a notice posted by the local government and seen by NPR.

Four Communist Party members and a Mongolian-language teacher were expelled from the party and fired from their jobs this week in Bairin Right Banner for failing to carry out the new policy.

As a result, many parents have begun sending their children back to school.

In mid-September, about a dozen parents lined up outside Tongliao's Shebotu Middle School to pick up their children. One parent quietly explained why he finally sent his daughter to school only this week: "If you do not send your child back, the government threatens to fire those with state jobs or to cut your social benefits." He asked to remain anonymous because of the threat of punishment.

The intimidation extends to journalists. A black car with no license plates followed NPR in Tongliao. Shortly after speaking to parents outside Shebotu Middle School, a group of 12 plainclothes and uniformed police officers, some claiming to be parents, prevented NPR from interviewing more people in the city.