Accessibility links
COVID-19 On Campus: Colleges Face Financial Strain As Cases Rise Scott Carlson, a writer at The Chronicle of Higher Education, says COVID-19 has strained the finances of some colleges: "Over the next year or two, we will start to see these colleges fall away." 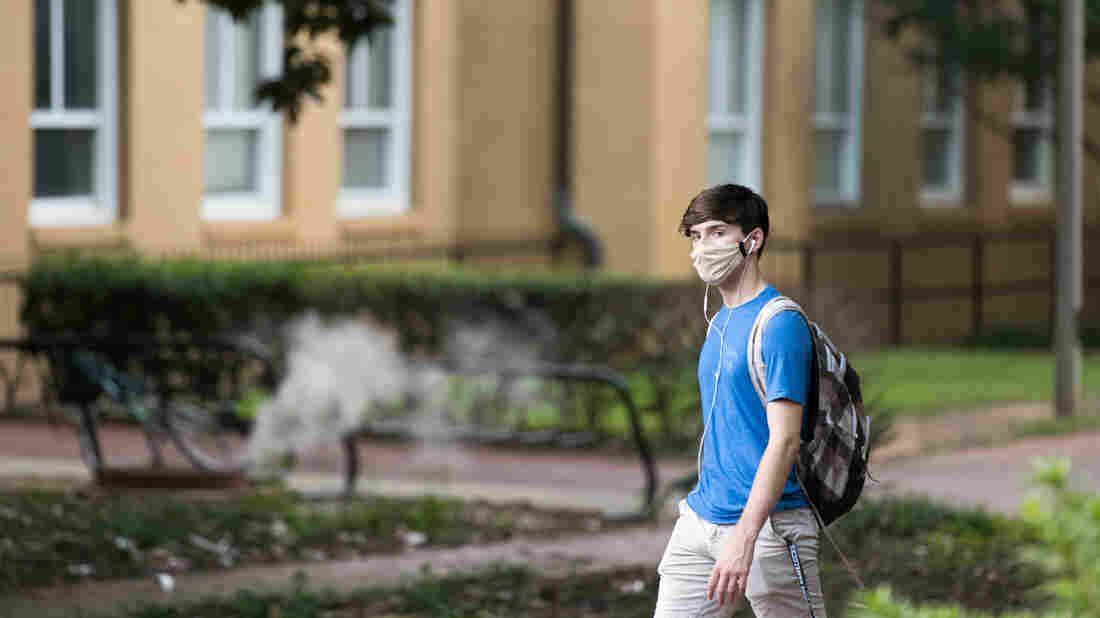 A student walks on campus at the University of South Carolina. During the final week of August, the university reported a 26.6% positivity rate among the student population tested for the coronavirus. Sean Rayford/Getty Images hide caption 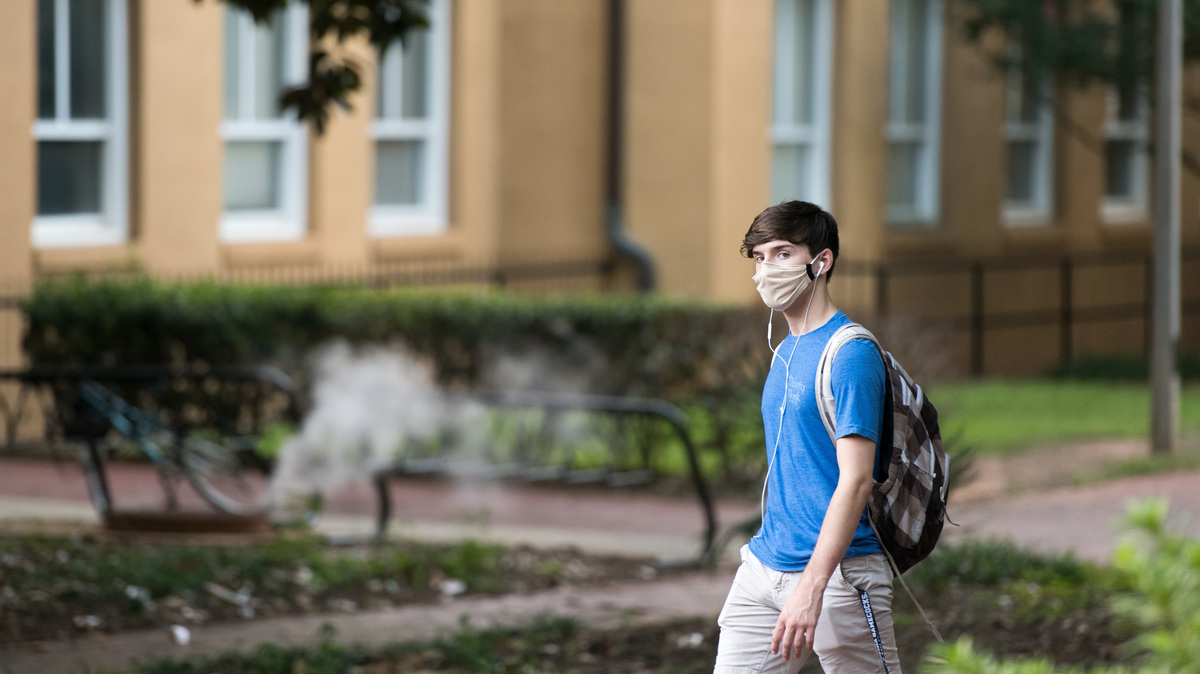 A student walks on campus at the University of South Carolina. During the final week of August, the university reported a 26.6% positivity rate among the student population tested for the coronavirus.

As the fall semester kicks into gear, college campuses have become the pandemic's newest hot spots. The New York Times reports there are more than 88,000 coronavirus cases at the nation's colleges and universities.

Scott Carlson, a senior writer at The Chronicle of Higher Education, isn't surprised by those numbers.

"A lot of people thought that there would be an explosion of cases on campus," Carlson says. "Most of the students that I talked to — for example, at USC — they all knew that the colleges couldn't keep this under control. They just wanted to turn up for a few weeks to see if they could have something of a fall semester experience."

Carlson estimates that about 20% of American colleges or universities are offering primarily in-person classes, while 16% are offering a mix of in-person and online experiences. Many others are completely virtual. Carlson notes that in many cases, the decision to offer in-person classes was driven largely by financial concerns.

"These colleges are under intense financial pressure given the trends in higher education," he says. "I think everybody involved really wanted to try to make this work.

On the financial stress colleges and universities are under

One small private college president in Ohio told me, "We make money on the dorms. We break even on dining, and we lose money on everything else, including the education and tuition.

One small private college president in Ohio told me, "We make money on the dorms. We break even on dining, and we lose money on everything else, including the education and tuition." So for a number of these colleges, having students living there, paying for the dorms, is a big financial boost for those colleges.

Add to that athletics. There are a number of schools that have prominent athletic programs. Very few schools actually make money off of the athletics, but even when they don't make money off the athletics, the athletics ends up being something that attracts students both to go to school there — to play athletics, but also to watch the athletics. So if sports is not going on, that ends up being a hit. I think of a place like Monmouth College, for example, in Illinois. They told me that 50% of the students there are athletes, [Division 3] athletes. So going there and playing their sport is a huge incentive for the students to enroll in Monmouth.

And then, finally, there's the tuition considerations paying for the classes themselves. So many of these colleges are highly, highly tuition dependent. And if students aren't there — even if they have a loss of a small number of students — that ends up being a huge hit for the college financially, so we're going to see big budget cuts coming up because of that.

If you look at the coronavirus tracker that The New York Times has put up for colleges, you can see that it's the big state institutions that have really seen a spike in numbers. And I think that has to do with the anonymity of living [at] a big state university. It's tens of thousands of people. And the notion that you can sort of escape into the crowd and not have a kind of responsibility toward the rest of the student population is a little more possible when you're more anonymous on those campuses.

Can Military Academies Serve As A Road Map For Reopening Colleges?

In the case of smaller colleges ... they really haven't seen the spike in cases that these larger state universities have. And I think that has to do something with the kind of community that's in these smaller schools. Also, these smaller schools tend to be rurally situated, so they're outside the cities and outside of contact points where the students might be able to pick up COVID-19 more easily.

On the cost of widespread testing on campuses

Cal State has said that they're going to do an online semester in the spring. They're doing an online semester this semester now. Tim White, who's the chancellor of Cal State, said that testing would cost the university system overall something like $25 million a week. It's just not possible to do. Yeah, some of these tests run anywhere from $100 to $150 a piece. That's very expensive.

Now, the University of Illinois ... has developed this rapid saliva test, which has become pretty cheap. It costs about $10 to $15 for them to do it. And it's fast. And it's connected to this app that I talked about. So that, I think, will start to move the ball a little bit as some of these faster and cheaper testing programs come online, more colleges will be able to pull them off. But still, that's pretty expensive to do: Two tests a week at $10 to $15 a pop.

On many small college towns' reliance on students for their economy

You have these small colleges dotted across the country in these little communities, and given the kind of evaporation of wealth around agriculture, agriculture has been consolidated and mechanized and started going away in the 20th century in a lot of these small towns. And then after that, manufacturing ... was automated or it was sent overseas. And so these small colleges end up being sort of the last economic pillars in these small towns. Many people who live in these small towns realize that the college is a vital driver of businesses and activity there. And at the same time, traditionally students have been troublemakers. There's tension between the college and the administration of the college and the power of that college. And then there tends to be tension between the college and the local community in terms of the decision-making there, mainly because the university or college tends to wield a lot of power and tends to push the city around. So there's already that tension.

How The Coronavirus Has Upended College Admissions

Then you bring in these students who bring the coronavirus with them. What I heard in places like Ames, Iowa, was that the local residents weren't eager to see the students back. The local residents, even when they were skeptical that the coronavirus was a thing, they still worried that the students would bring a lot of infection and disease with them. But at the same time, some of those same people told me, "We need to have them back because our restaurants are dying, our retail is dying." Some people were landlords. They rented to students and they needed the money to come back.

On financial pressures higher ed was facing before COVID-19

After the [2008] recession, fewer children were born. And so what we're seeing right now is a decline in the number of students that will hit its low point sometime in the mid-2020s.

After the [2008] recession, fewer children were born. And so what we're seeing right now is a decline in the number of students that will hit its low point sometime in the mid-2020s. And this has already exerted a huge amount of pressure on colleges, particularly small private colleges. If you look at a place like Vermont, they've had a number of college closures there over the past year or two. And that's happened in part because Vermont is one of the states that is seeing the most impact from these demographic declines. So that's huge. You had places there like Southern Vermont College and Green Mountain College, which was a college that had a great niche in this country, being one of the most sustainable green colleges in the country. Even a place like that, that had a name, is going out of business. So for the public colleges, it's also been a pressure. ... Systems like the PASSHE [Pennsylvania State System of Higher Education] system in Pennsylvania, which is facing restructuring. And there's other places, North Dakota, public colleges in Minnesota, for example, have been pressured. A lot of this has to do with these demographic declines.

On top of that, after the 2008 recession, families were hit financially. And what we've had over the past 10 years or so is really limitations on the amount of money that families can devote to a college education. And that's been tough on colleges that have a high sticker price, even if the actual price those students are paying is a bit lower, if they have a high sticker price, it's just been something that has dissuaded families from wanting to enroll there.

Colleges also have a lot of issues around cost. They haven't been good at tracking their costs or really knowing what their programs cost. For example, a lot of colleges don't know what it costs them to graduate a nursing major, versus an English major, versus a business major. And that's in part because the college business model is so complicated.

[The pandemic has] definitely overlaid its own set of challenges. Traditionally, colleges have been these places that have offered a cornucopia of educational opportunities. Back when times were good they were really good at starting programs and not so great at shutting them down. If they weren't successful, they would just let them linger for a while. That's not going to be possible anymore. And if you think about the sort of the situations or the kind of diminishment of programs that's probably coming in the future here, it's going to be really hard for a lot of these institutions.

I think people were really expecting colleges to sort of hit the wall in July. And it didn't happen. It didn't happen in August. "It takes a long time to kill a college" — that's one of the sayings in this industry. But I think that over the next year or two, we will start to see these colleges fall away. They just won't be able to deal with the kinds of financial pressures that they've had on top of the financial pressures that they've already had. Of course, that's going to lead to a lot of damage in the Northeast, in the Midwest and in parts of the South for sure.

It will create a disparity in who gets to go to college, because a lot of those smaller institutions, even if they seem expensive or even if they're not all that selective, they do have a really great history of attracting students, bringing them in, giving them a degree, particularly students from first-generation or low-income backgrounds. ... Small private colleges tend to do a better job of that than some public institutions and even some community colleges. There will be a disparity there in educational achievement that will come out of this. The elite colleges, they're always going to be OK. Not only because they have the endowment, but because they're able to pull students up when they're lacking in demand. They can always pull students up from colleges that are at lower tiers, so they can meet the demand for themselves because they just have that prestige. For colleges that don't have that prestige, that's going to be really tough.

Heidi Saman and Kayla Lattimore produced and edited the audio of this interview. Bridget Bentz, Molly Seavy-Nesper and Meghan Sullivan adapted it for the Web.