Accessibility links
Workers With Disabilities Can Earn $3.34 An Hour. Agency Says Law Needs Change A 1938 law created "exploitative and discriminatory" job programs and should be phased out, marking a new milestone in the debate over "sheltered workshops," the U.S. Commission on Civil Rights says. 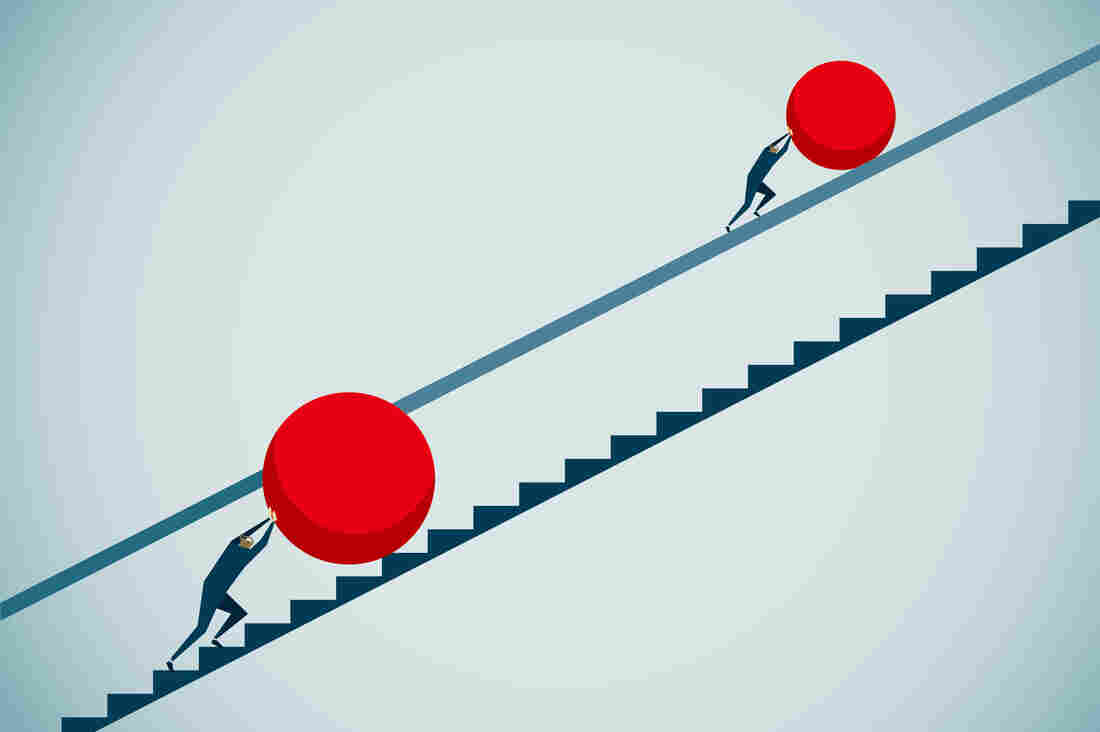 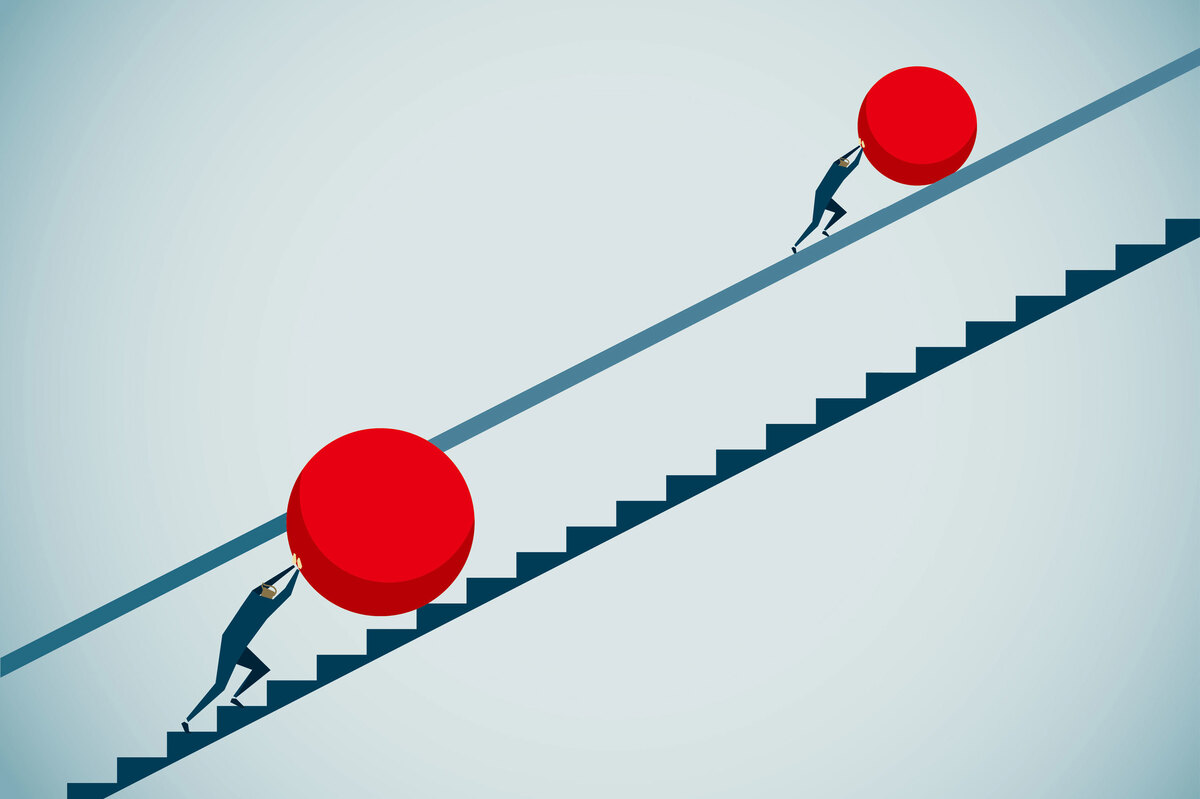 Workers with disabilities can be paid less than minimum wage. The U.S. Commission on Civil Rights says that has trapped workers in "exploitative and discriminatory" job programs.

Jerry D'Agostino had a job but couldn't afford a few things he wanted to do: a meal out once a week, go to the movies, attend Comic-Con. He was working alongside other people with disabilities at a center in Rhode Island, doing what he calls "benchwork" — rote tasks like fitting rings into heating tubes, packaging ice packs, assembling boxes for jewelry.

D'Agostino was making so little because, since 1938, U.S. labor law has carved out a rule for some people with disabilities, saying they can be paid less than minimum wage. The New Deal-era law was intended to encourage employment of more people. But a new report by the U.S. Commission on Civil Rights says the exemption should be phased out, because it's been trapping workers in "exploitative and discriminatory" job programs.

Advocates Fight To Keep Sheltered Workshops For Workers With Disabilities

This call by a top federal civil rights watchdog is a major milestone in the difficult history of so-called sheltered workshops and other "subminimum-wage" employers. They pay tens of thousands of people with disabilities an average wage of $3.34 a hour, the report says, for tasks like bagging newspapers, shredding papers by hand or wrapping silverware in napkins. They calculate wages by regularly timing how long it takes each worker to complete their task and comparing that productivity to an experienced worker without disabilities.

The fate of these work programs has been contentious. Disability-rights advocates say the programs limit the workers' potential while using them as cheap labor. But some workers' families and the organizations themselves argue that eliminating them would threaten the well-being of people who are happy to be there and take away their choices.

"So far, in the 82 years of its existence, the program has not been very successful in helping people to become employed outside of the subminimum wage context, so it appears that it doesn't work," Catherine Lhamon, who chairs the civil rights commission, told NPR.

"I was ashamed of the ways that we have operated, now over eight decades, a federal assumption that people with disabilities are less capable of full employment than people without disabilities," she said.

A lot of data is missing about subminimum-wage job programs. Some of them are called sheltered workshops because they keep people with disabilities in a separate cluster. Estimates for how many people they employ range from over 100,000 to quadruple that, across almost all states. The employers — commonly nonprofits that provide other services beyond work — receive state and federal money to support these jobs. Many of them have government contracts.

"Categorically, under [the exemption] people with disabilities being paid a subminimum wage are not granted the same protections, nor are they offered the same opportunities that are available to people working at the minimum wage or above," said Thursday's report, approved by the commission's Democratic majority, with Republican and Independent members abstaining or dissenting.

After months of studying the program and its oversight, the federal agency now recommends that Congress repeal the exemption, Section 14(c) of the Fair Labor Standards Act, to end subminimum wages for people with disabilities — and to phase out sheltered workshops over time. Instead, the commission wants the government to shift its funding to get more people assistance and support to work in the community, for regular wages.

Most of the workers in subminimum-wage programs now are people who have intellectual and developmental disabilities. Some of their families helped workshops flood the commission with a record number of comments in support of sheltered workshops. Many noted concern for people with "severe" disabilities and said they wanted the programs to remain an option.

"We have chosen a workshop ... with our son's best interests at heart. Any suggestion that we would allow him to be taken advantage of or discriminated against is an insult," Linda Hau, the mother of a sheltered-workshop worker from Wisconsin, testified before the commission in November. She said the workshop allowed people "to work in an environment where they feel safe, loved and accepted, while having the pride of a paying job."

Dottie Fullem remembers that worry well. Years ago, her daughter Ann's sheltered workshop in Vermont prepared to shift to so-called community-based jobs. Would there be enough funding? Transportation? Support from the town? Would Ann be safe?

"Getting out into [the community with] all of these people became almost like an opening umbrella," said Fullem, now an advocate for phasing out workshops. She watched her daughter learn to cash her paycheck, make friends with a bank teller, and get into swimming and horseback riding. "Away from a sheltered situation, she became so talkative, so friendly," Fullem said. "She is a real extrovert now."

Vermont went on to become the first state to abolish subminimum wages for people with disabilities. A few others followed: Alaska, Maine, Maryland, Nevada, New Hampshire and Oregon. Four of those states no longer have sheltered workshops. More are setting limits on subminimum wages. Several federal bills have so far failed to end subminimum wages on a national level.

A 'Wake-Up Call' To Protect Vulnerable Workers From Abuse

A major concern, shared by both supporters and critics of sheltered workshops, is about leaving people jobless and worse off if workshops get closed. That's why the National Council on Disability had previously recommended a phased-out "systemic change" and why, Lhamon said, the civil rights commission urges a similarly gradual change that would expand existing support programs.

Disability-rights advocates point to success stories of people thriving outside of the systems that underestimated them, including instates that have moved away from sheltered workshops. Anil Lewis, a leading advocate against subminimum wages with the National Federation of the Blind, testified about his past work running a sheltered workshop, thinking he was doing the right thing.

"Because of that misguided compassion, these individuals spend significant parts of their lives wasting away in that workshop — making money for our center, but wasting away," Lewis said. "I am just sitting here really feeling sad about what I've perpetuated ... because there is a better alternative."

Proponents of the workshops, however, zeroed in on former workshop workers who, without them, went on to work fewer hours or had to move to adult day care programs. Similarly, two civil rights commissioners who voted against Thursday's report argued that repealing subminimum wages would leave more people with disabilities unemployed.

"It is a matter of realism and trust," Commissioner Peter Kirsanow wrote in his dissent. "The realism lies in recognizing, as so many parents have, that there are some people whose disabilities mean that their life choices are limited. The trust lies in trusting that the parents and guardians of these individuals, who know them far better than we do, can decide [what settings] are best for their loved ones."

The commission's recommendations include asking Congress to "expand funding for supported employment services." The agency also wants organizations shepherding government funding to evaluate each subminimum-wage worker. And it says states should produce detailed plans for a "gradual transition" that would "ensure all current 14(c) participants are fully covered with options to receive services during the hours they participated in a 14(c) program."