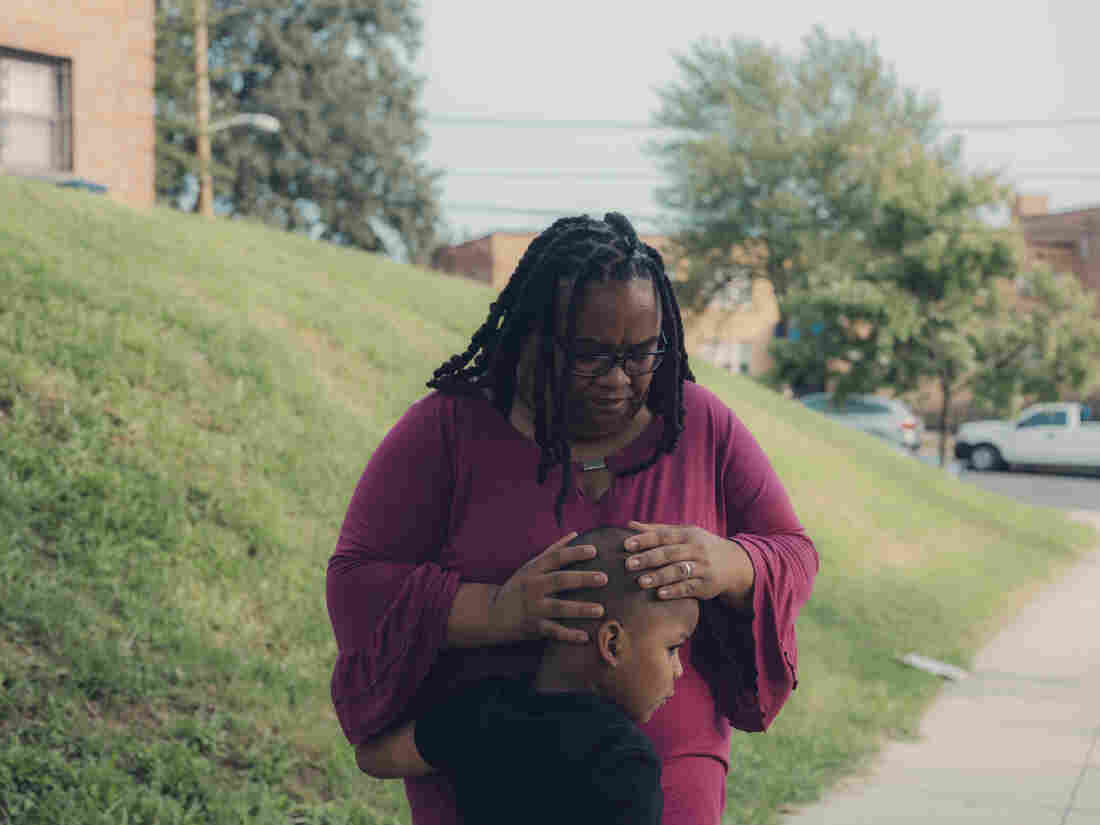 Patricia Stamper, with her 5-year-old son, works with children who have cognitive and physical disabilities at an elementary school in Washington, D.C. Jared Soares for NPR hide caption 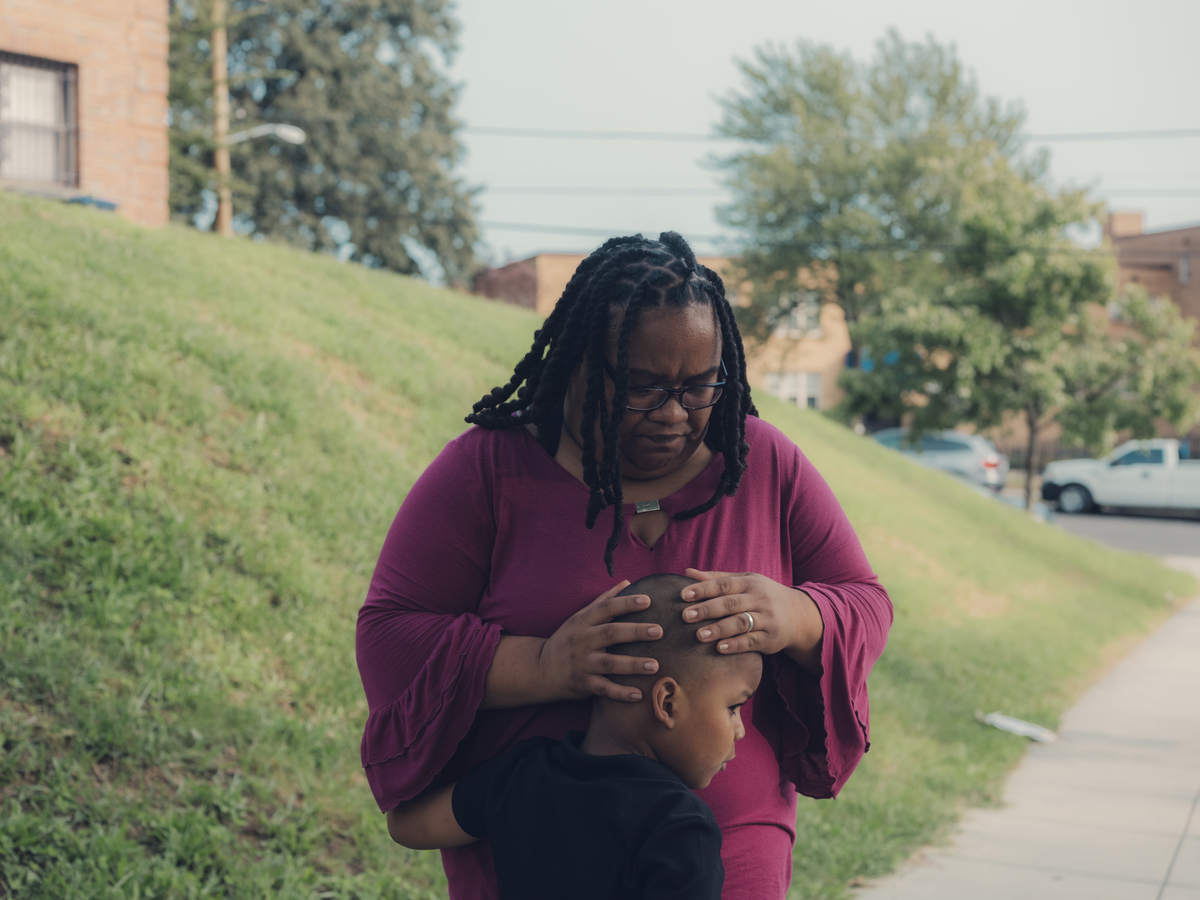 Patricia Stamper, with her 5-year-old son, works with children who have cognitive and physical disabilities at an elementary school in Washington, D.C.

I catch Patricia Stamper with a Zoom meeting going in the background and a child at her knee asking for attention. Stamper works as a teacher's assistant for special education students in the Washington, D.C., public schools.

These days, her virtual classroom is at home — and so is her toddler, who has a genetic disorder called Noonan syndrome, and her kindergartner, who receives speech therapy. Her husband works outside the home at a golf course.

Stamper says her older son can't sit still for three to four hours a day of screen-based learning. The other day, while she was working, he started acting up, imitating his favorite YouTube star. Soon the teacher was texting her — her son was nearly kicked out of virtual class. "It's hard to check him," she says. "I'm trying to do my job and, you know, bounce back and forth, but I'm only one person."

There are more than 4 million public, private and charter school teachers in the United States. The typical teacher is a woman in her early 40s. Over the summer, NPR and Ipsos surveyed a national sample of teachers, and we found that about half had children under 18 at home. Of those, 57% agreed with the statement: "I cannot properly do my job from home while also taking care of my children."

And now that some students and teachers are returning to the classroom, the balance hasn't necessarily gotten any easier. 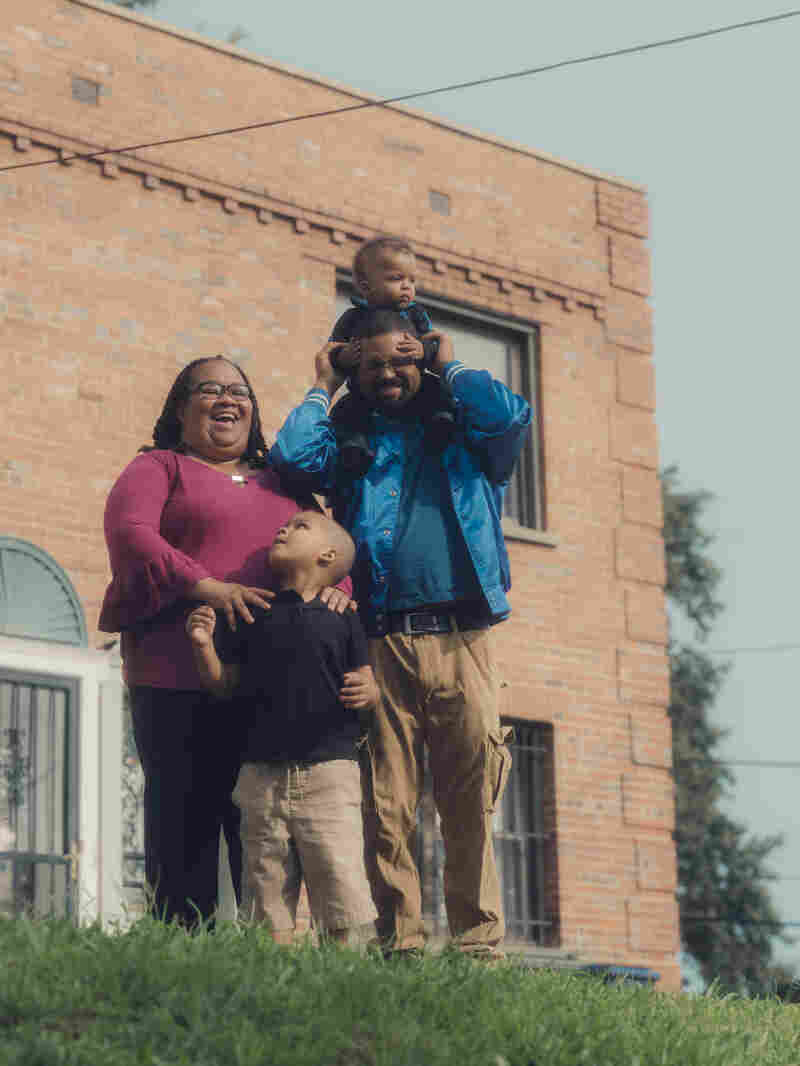 Stamper with her husband, Pete, and two sons at their home in Washington, D.C. Jared Soares for NPR hide caption 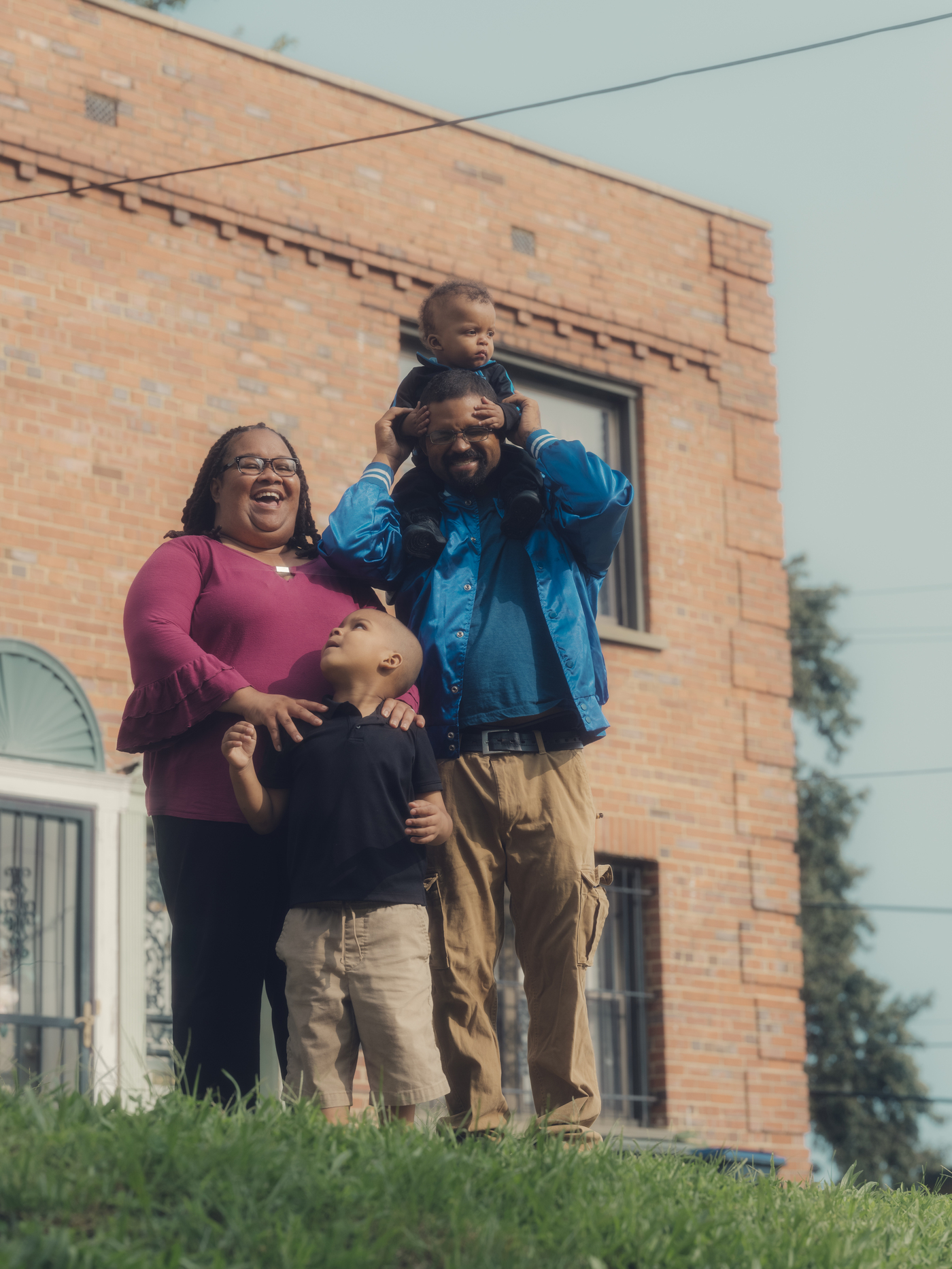 Stamper with her husband, Pete, and two sons at their home in Washington, D.C.

As the school year began, NPR put out a call asking teachers who are also parents to tell us about their experiences. We heard back from nearly 100. They told us of losing colleagues to the coronavirus, staying up past midnight planning lessons and having nightmares about returning to school.

We heard these feelings echoed from all over the United States. In places like El Paso, Texas, where Andrea Aguirre teaches sixth-grade English and has two children, one with Tourette syndrome: "I have never worked harder in my life, the level of mental fatigue is tremendous and there is no downtime."

Billie Bininger is an elementary school computer science teacher and mother of two in Lancaster, Ohio. "I have been working at my school full days, coming home and working until 12 to 3 in the morning for the past month," she told us. "I worked about 16 hours just this past weekend. I'm exhausted and can't sleep because I'm so anxious about all the things that still need to be done."

And Geoff Bowman, a high school chemistry teacher in Hillsborough, N.C., with three elementary-age children, seemed to speak for many teachers when he summed up the dilemma: "I love my kids; I love my students. Both deserve my full attention, but ultimately I'm falling short for both."

"I just want to die"

Bethany is a high school science teacher in New Jersey. Her husband teaches French at the same school, and they have three young sons, ages 8, 6 and 4. (We're not using their last name to protect the family's privacy.)

Like Bowman in North Carolina, Bethany was one of many teachers who told NPR they felt torn between their students' needs and the needs of their own children.

Last spring, she said some of her students were working long hours at essential jobs, taking care of siblings and/or sharing devices. As a result, they would often turn in their work late into the evening, and she then would have to stay up to grade it for the next day.

One student stopped handing in work altogether. When she finally tracked him down by phone, she says, he started crying and told her he was suicidal.

At the same time, her youngest child, a preschooler, developed a mysterious chronic skin condition. One evening in April, she was sitting in the emergency room with him when she got a message on her phone. "One of my students was like, 'I need your help.' And I was like, 'I just can't right now.' And she was like, 'That's ridiculous. I'm telling my guidance counselor.' "

She and her husband often found themselves working from 5 a.m. until midnight, responding to students and fitting their own children's schooling in between.

Bethany says her middle child, then a kindergartner, would often be doing lessons until bedtime. He became lonely, anxious and depressed. Then one day, he stopped eating. She said it took a few weeks to fully realize.

"We were still working!" she explains. "So sometimes for dinnertime, we would plop them in front of the TV, or we would make them sit at the table with us while we were working."

One night, suspicious, she looked through the garbage and found napkins full of spit-out food. By that time, her son had lost significant weight.

She says he improved after he started seeing a therapist online. And while his school is still remote this fall, he has joined a travel soccer team for an important social outlet. But, Bethany says through tears, she'll never forget "watching my kid lay in bed all day and saying, 'I just want to die.' "

Melanie Goldberg, who teaches English as a new language in Brooklyn and has an only child, is one of the few teacher-parents who told NPR that she has chosen to prioritize her students' needs outright. Many of her students, she says, are recent immigrants and some are undocumented. She has spent hours on the phone helping them get set up with Internet service and deal with other immediate needs.

As for her own 9-year-old son, she says, "He reads well. He's proficient in different subjects. His academics are not what I care about right now. I know that we will catch up later. Safety is important, our mental health is important and then my students."

"Somebody gets the short end of the stick" 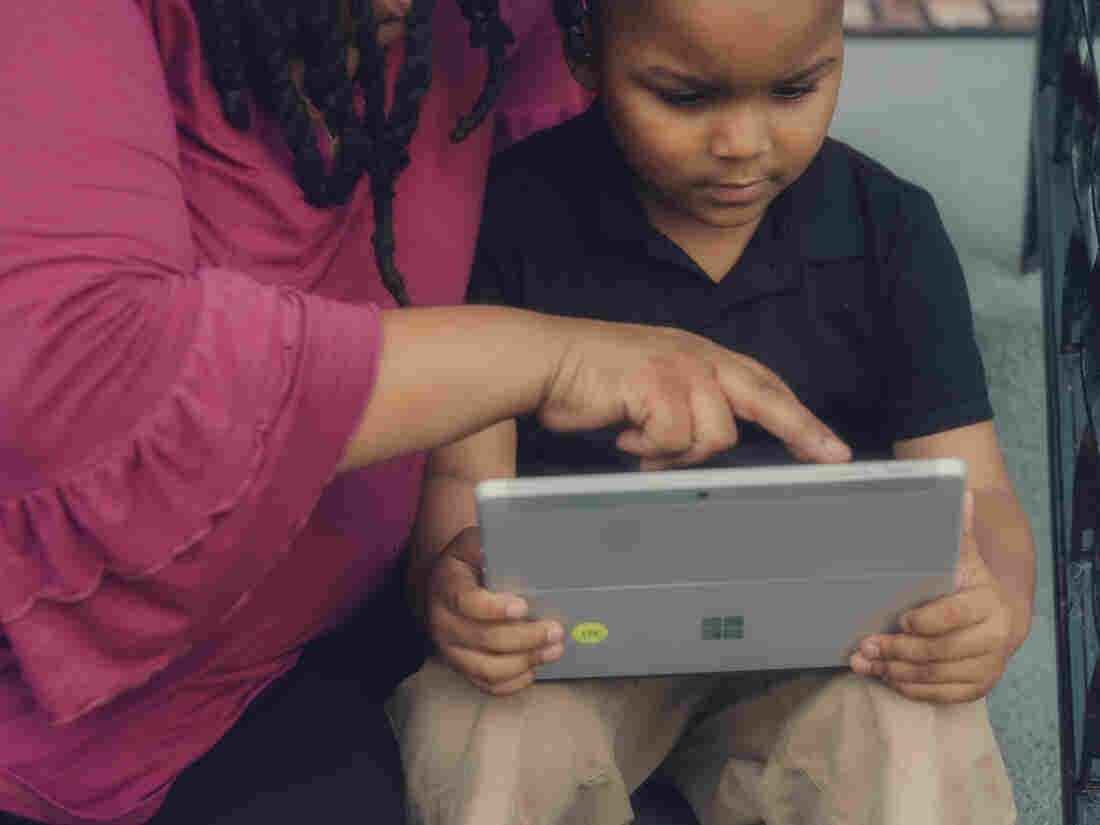 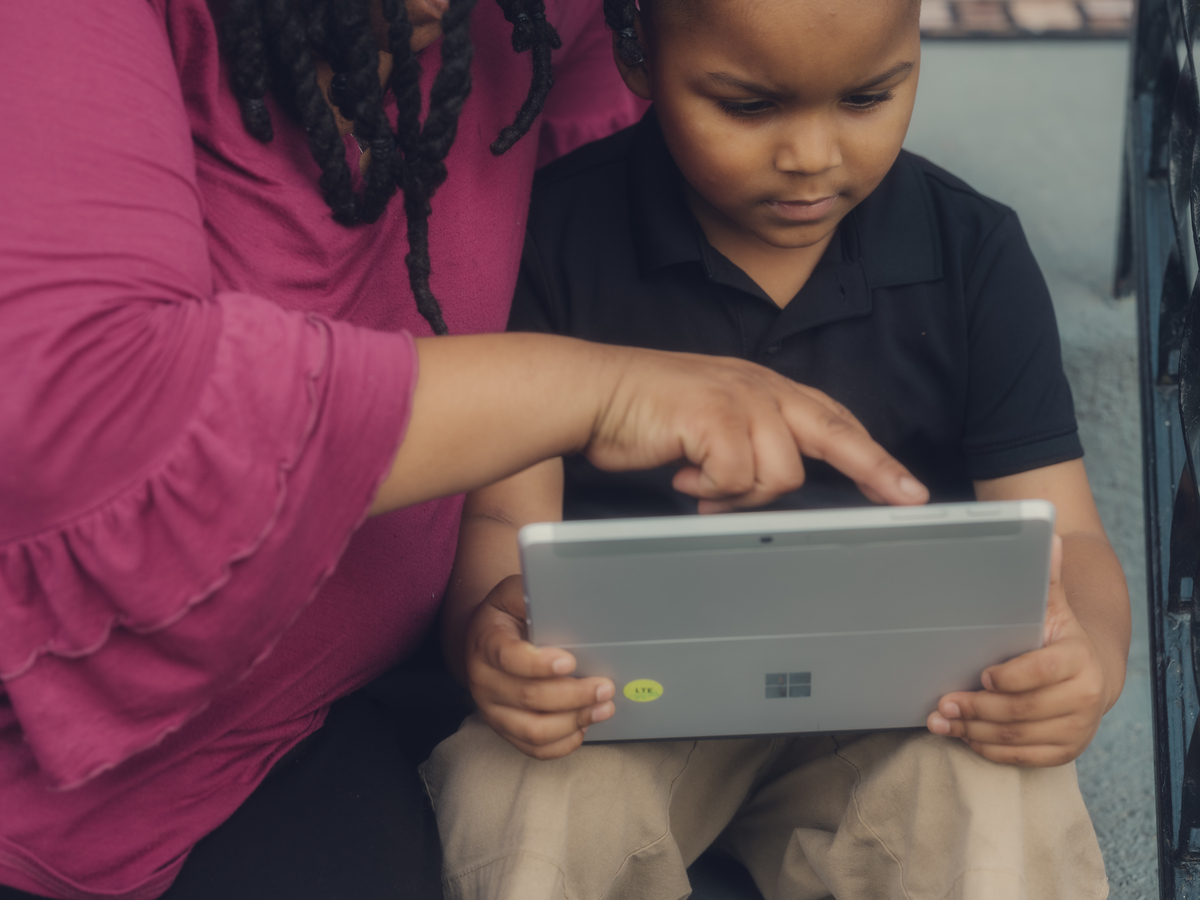 Patricia Stamper helps her eldest son with schoolwork at their home.

Educators told us they worry about their safety and their families' safety. At the same time, they're facing new and difficult professional challenges. Many said they are used to working hard, used to having to improvise with few resources, but the lack of clarity from leadership at all levels is hitting particularly hard.

Patricia Stamper says what she needs, in the end, is some direction from her school district: "Like, you let me know what you want me to do, and I'll figure out how to do it."

Simultaneously teaching online and in-person students is difficult. Schedules often don't line up, with teachers in the classroom full time and children part time. Or different schools will have different days in session.

As a result, child care costs are eating up salaries — for those who have money to spare to begin with. "I'm going to work for health insurance," said Mike Vial, who teaches language arts in a rural county near Detroit. "All my money is going to pay for child care."

His two children were excluded from a "pod" child care share with friends, he said, because of the risk he faced going into the classroom.

Brandi Scraper teaches in Oklahoma and is a single mother with five children ranging in age from 8 to 17. Since she herself is teaching in the classroom, "I wanted to keep as many of my kids out of the classroom as possible to minimize our exposure," she said. "I feel like they were the sacrifice."

Scraper sent only her youngest, twins, into in-person school, and they found out they were exposed to someone with COVID-19 after the second day. She and her twins stayed home for two weeks. They later tested negative, she told us, and meanwhile she kept supporting her students from home through quarantine.

Shana White teaches computer science to middle schoolers in suburban Atlanta. Currently, she wears a mask and a face shield and sits behind plexiglass at the back of the classroom. She has to teach students simultaneously online and in person.

The problem? "You can't give proper attention to both groups equally. ... Somebody gets the short end of the stick."

White says her son and daughter are learning virtually while her husband works from home. She says it's killing their love of school: "Every time in the morning when my son gets up, he goes, 'Oh my gosh, I have to do virtual school again.' And just hearing that from my 8-year-old, it breaks my heart."

But she also doesn't think it's safe to be learning in person, especially for her son, who has asthma. Every day after coming home, she showers and changes clothes before coming near her family, to avoid contamination.

"I don't feel like it's safe to be in schools," she says. "But we are a right-to-work state. As my job is requiring me to, I'm in here being as safe and cautious as I can." 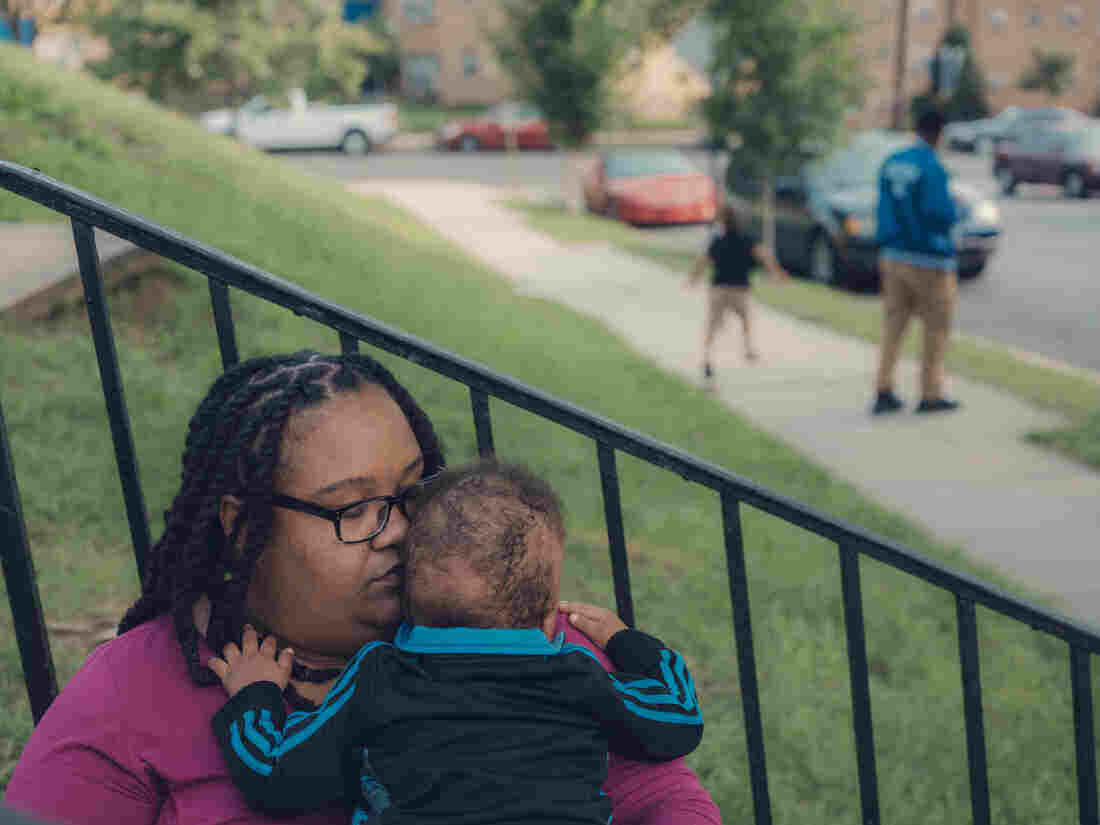 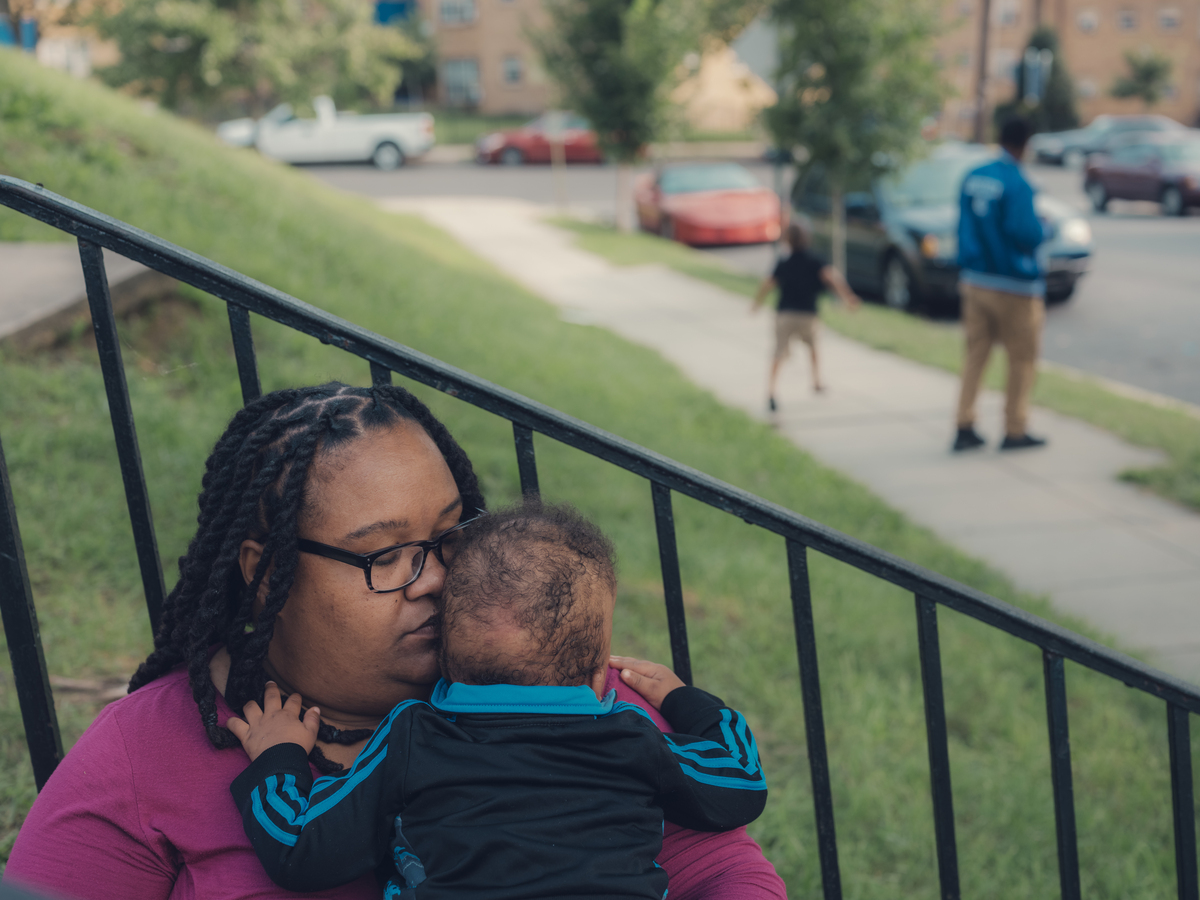 Patricia Stamper holds her younger son, 1, at their home.

Adding to personal and professional struggles, teachers told us they're also feeling affected by public frustration and complaints about teachers.

"People are vilifying educators," says Heather Cline, who teaches high school Spanish in Seattle and is the mother of a 6-year-old who was adopted from Azerbaijan and is an English-language learner. "I'm beyond frustrated and overwhelmed, and I don't feel as if my district is supporting us educators nearly enough."

Melanie Goldberg in Brooklyn agrees: "Even though I have friends who know that I'm a teacher, I still end up hearing the negative teacher talk a lot."

She says some more privileged families have a "client" mentality, expecting personalized service from their children's teachers. "It's uninformed, and it's pretty mean, even though they know personally for me how much of a struggle it is or how unrealistic it would be for them to totally revamp their professional lives with no support."

Jessica, whose last name we're not using to protect her family's privacy, summed up the uncertainty that teachers who are parents are feeling, twice over, right now. "The best way I can describe the entirety of this experience is just a giant mental seesaw."

Jessica is a math and reading intervention teacher who lives on a farm in rural Minnesota. She says she herself and her older daughter are on the autism spectrum, while her younger daughter has a disorder with some psychiatric symptoms called PANDAS.

"One minute you're like: Yup, we're in person. I can do this. You know, it's not ethical for me to, like, desert my students and be unwilling to do something that's scary and makes me anxious because I'm selfish and I just don't feel like it. So I'm going to suck it up and do it. ... And the next minute, I see that we added seven cases in our county today, and I feel like, oh, my God, everybody's going to die!"