Accessibility links
Review: 'The Great Pottery Throw Down' Is Soothing Television Indeed If you like The Great British Baking Show, you'll recognize a lot of the charms of the BBC's pottery competition, all three seasons of which arrive on HBO MAX this week. 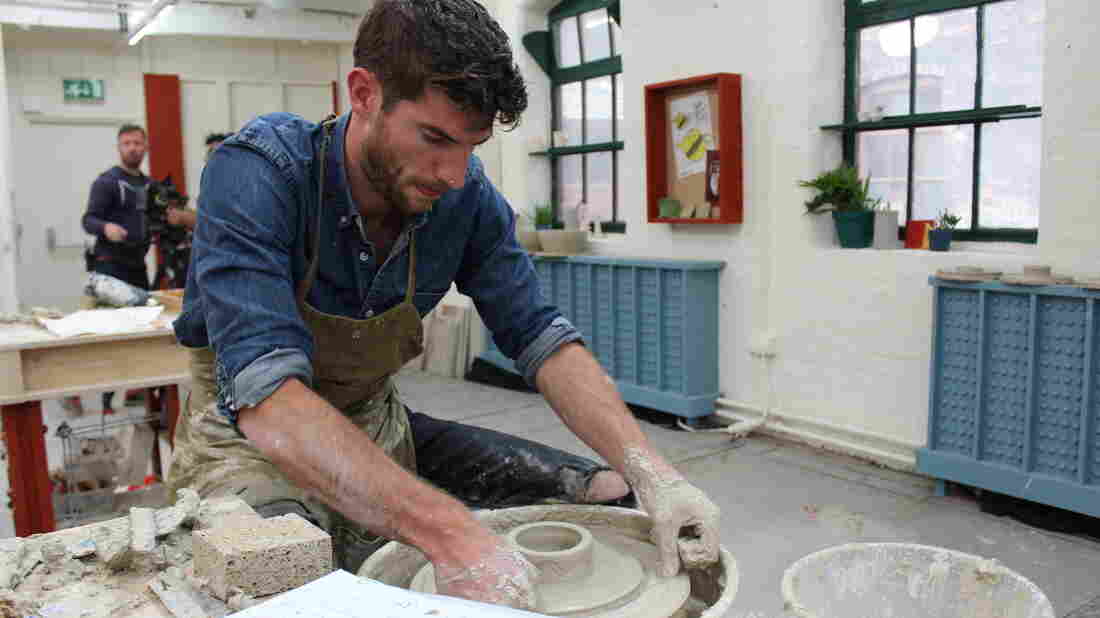 A handsome man throwing a pot on a wheel is all one can ask from quarantine viewing. Love Productions/HBO MAX hide caption 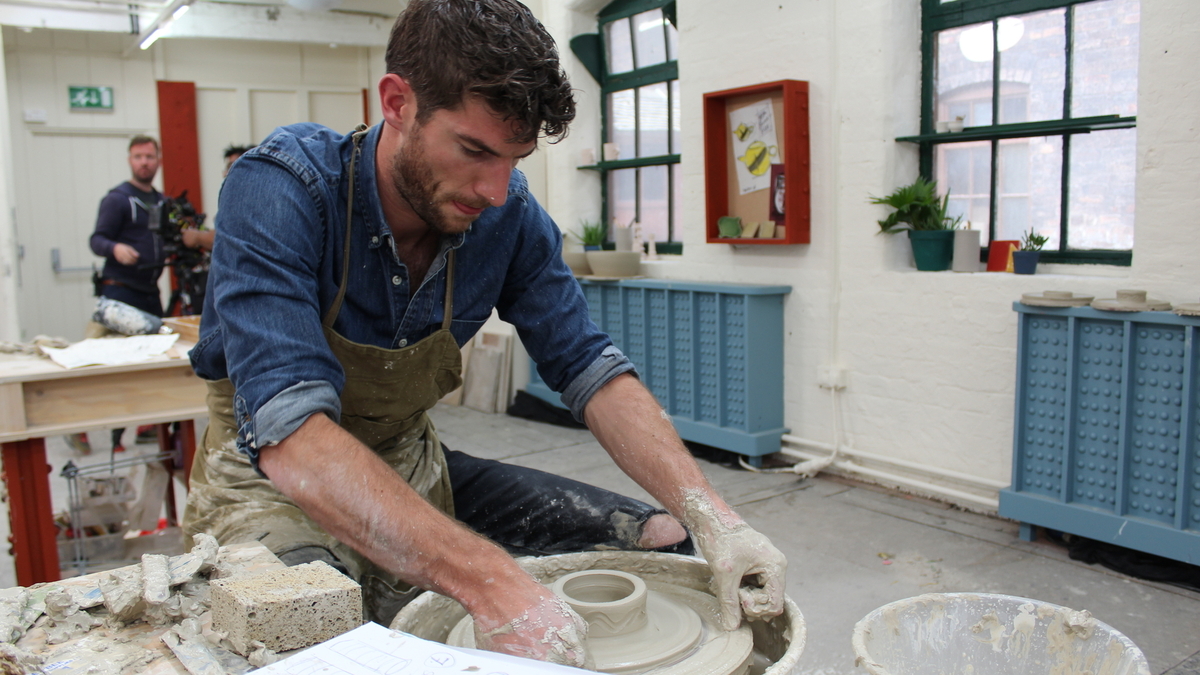 A handsome man throwing a pot on a wheel is all one can ask from quarantine viewing.

It's very easy to explain the appeal of The Great Pottery Throw Down, which comes to HBO MAX on September 17: It's The Great British Bake-Off, but for pottery, and it has the same gentle, good-hearted energy.

Throw Down began on the BBC in 2015, so there are three seasons in the queue, and HBO MAX has all of them. That's six episodes from season one, eight from season two, and ten from season three. I gobbled all 24 episodes eagerly over the space of a few quarantined days.

The format is Bake-Off (known to U.S. viewers as The Great British Baking Show for legal reasons) with only very modest adjustments. A host (Sara Cox for the first two seasons, Melanie Sykes for the third) brings warmth and support, two judges (Keith Brymer Jones in all three seasons, joined by Kate Malone for two seasons and Sue Pryke in the third) evaluate the results, and a lineup of lovely contestants with a spirit of teamwork rather than cutthroat competition works through a series of challenges.

I know far less about pottery than I do about baking, but it didn't matter. The host and judges are good at explaining what goes into making a beautiful pot or a graceful handle for a pitcher. Each episode has one major challenge, plus one or two smaller ones that are easy to incorporate into the progress of the episode, since large pieces of pottery take so much time to dry and fire. (This is a thing I know all about now, you know. Ask me about outdoor kilns and pit-firing!) When you think about pottery, you might be envisioning plates and cups and bowls, and there's plenty of that. But the judges also challenge the potters to create large garden sculptures, light fixtures, and — intriguingly — working toilets.

One of the things pottery has in common with baking is suspense. Just as you never know whether a cake will rise until you put it in the oven, you often can't tell whether a piece of pottery is structurally sound until it comes out of the kiln. The friendly kiln man in all three seasons, whose name is Rich, is responsible for carefully placing each piece in to be fired, and for returning the pieces to the potters, who only then discover whether a piece has developed cracks or, in some cases, very nearly blown up. Populating a show like this with friendly and appealing people makes that suspense both more meaningful ("Oh no! Poor James!") and less devastating ("Well, they'll all give him supportive hugs!"). 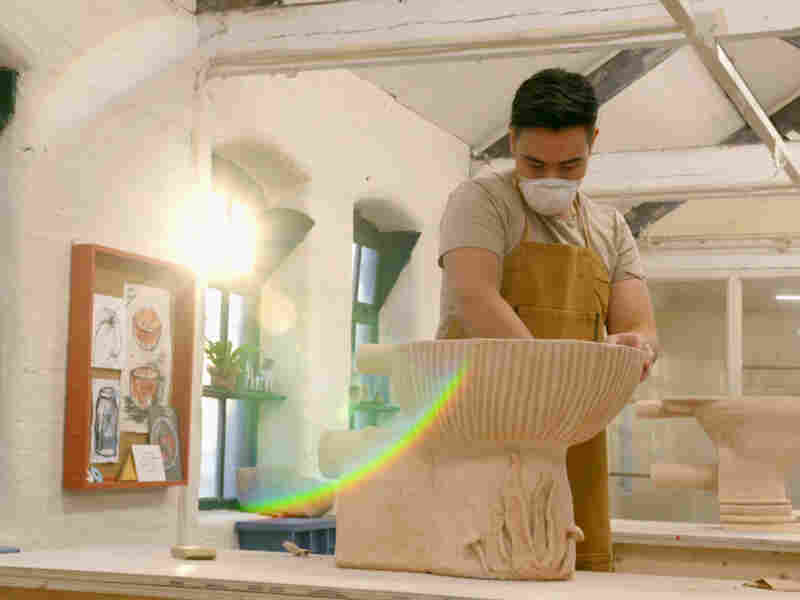 Does it get any better than romantic lens flare over a handmade toilet? Love Productions/HBO MAX hide caption 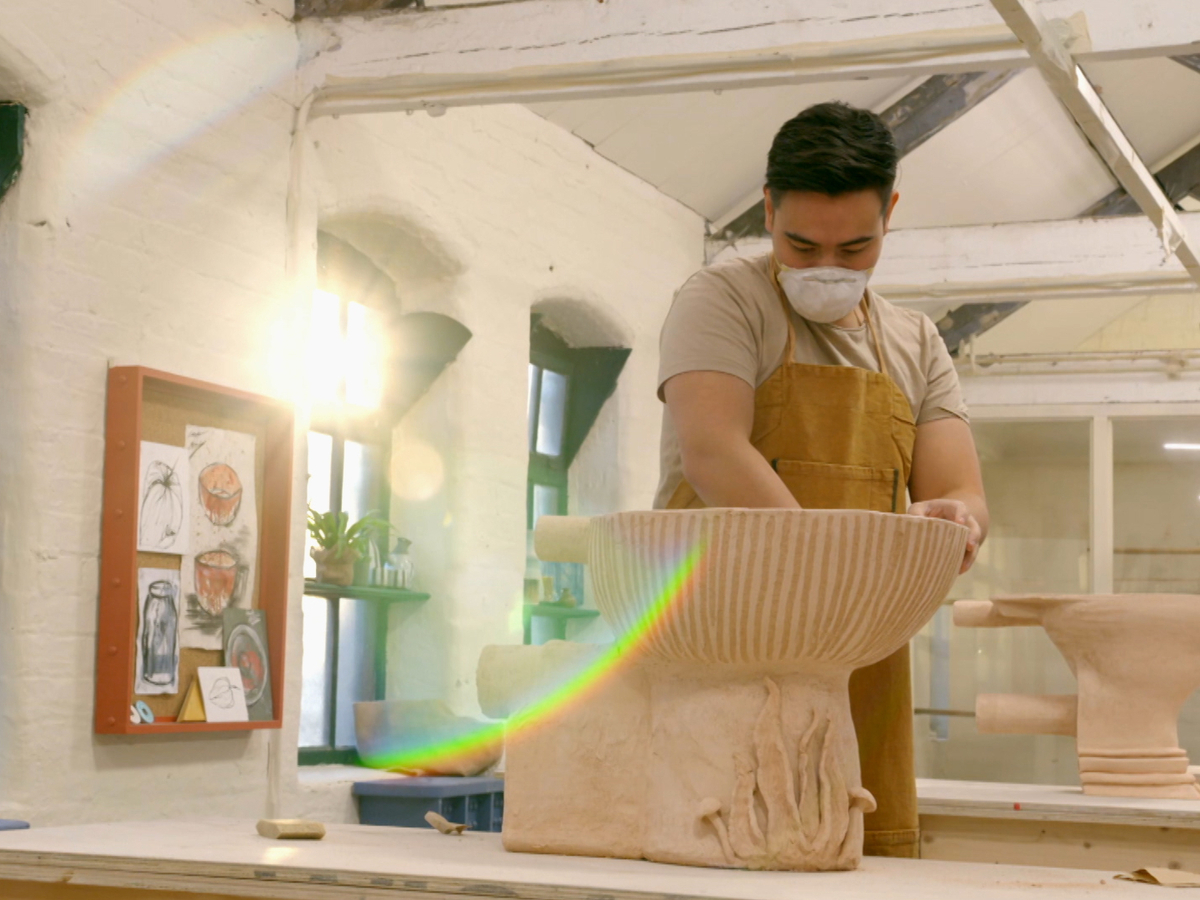 Does it get any better than romantic lens flare over a handmade toilet?

If I have a complaint — I should muster something, right? — it's that the bigger the projects become, the more they are engineering feats and the less success relies on elements of expression. The perfect balance between knowing how to make a heavy object support itself and knowing how to put a gorgeous glaze on a vase is worthy of reward, but at times, the larger projects tip toward people who know how to do large-scale 3D modeling, which can get a little dry for my taste. I like watching the creation of a delicate teacup more than I do a sturdy base that won't collapse — even knowing both are perfectly legitimate parts of pottery. This may be a matter of personal preference and doesn't reflect a lack of respect for building; I have nothing but admiration for anyone who can hand-build a toilet. (A phrase I never expected to place in a review.)

Timing is everything with baking, and with pottery — and sometimes with television, too. I would have welcomed, at any time, the opportunity to couch out (you know what I mean) with such a pleasant celebration of crafts. But right now, these 24 episodes, which are gentle and decent and educational and serene, and which celebrate patience and beauty and the creation of things that are sturdy and will last, arrived like a shipment of fuzzy slippers.