Accessibility links
Agricultural Workers In Oregon Harvest Wine Grapes Through Fire Smoke "The smoke is so dense," one agricultural worker in Oregon told NPR. "I feel dizzy, my throat hurts and my head feels like it's going to explode." Their employers are also faced with tough choices.

'I Have To Work': Agricultural Workers In The West Harvest Crops Through Fire Smoke

'I Have To Work': Agricultural Workers In The West Harvest Crops Through Fire Smoke 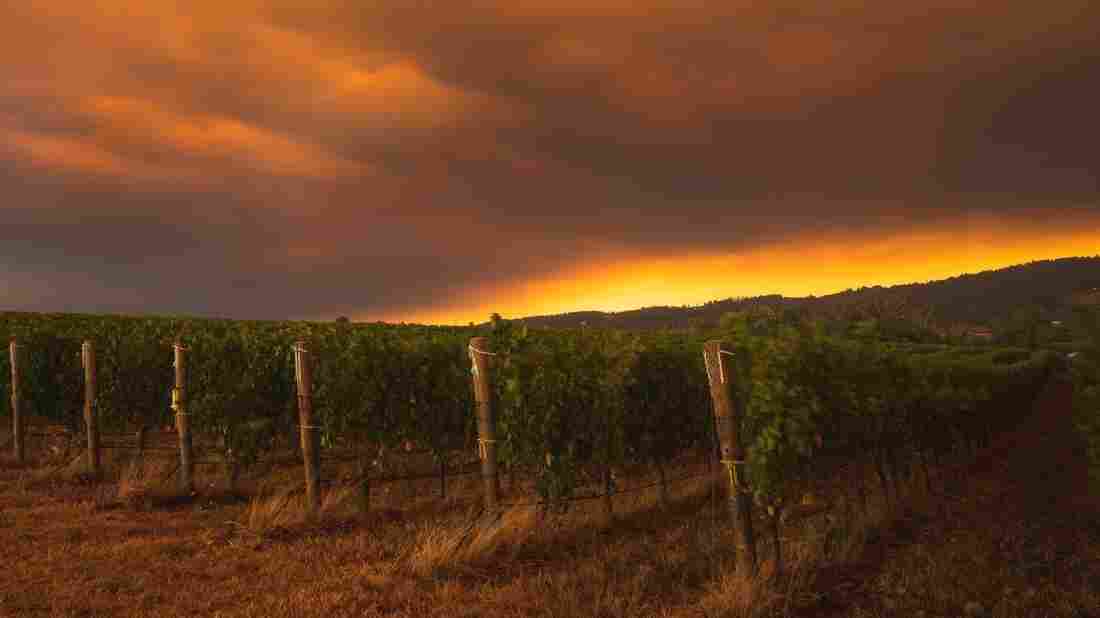 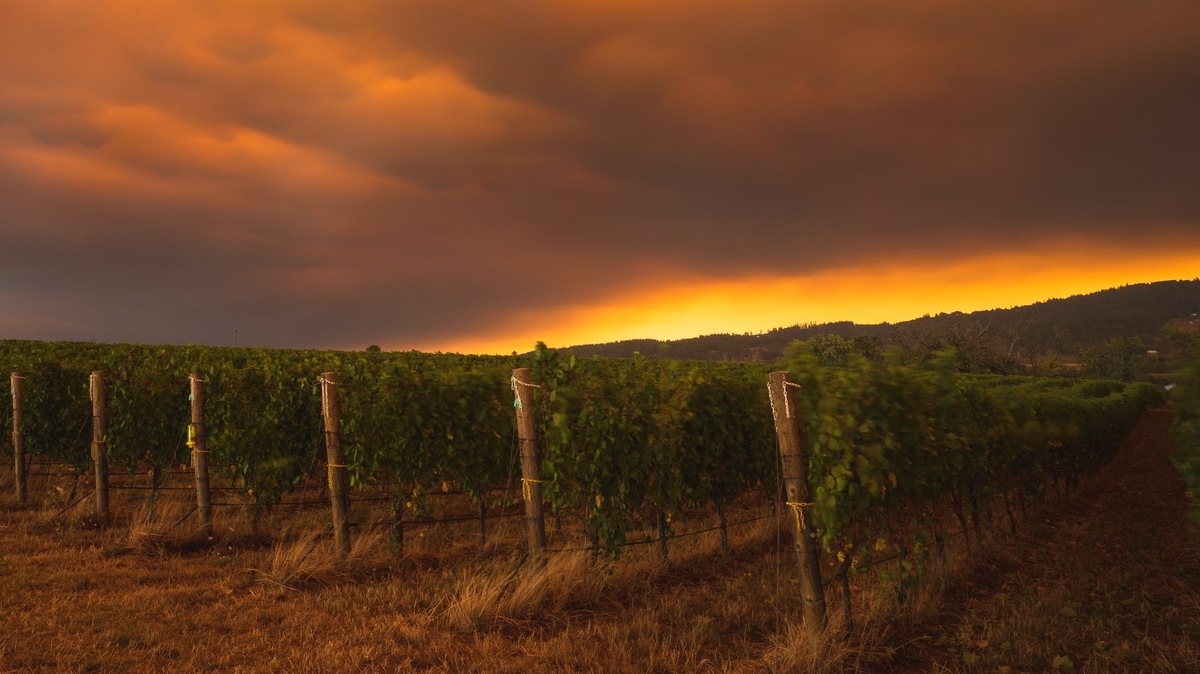 Rows of pinot noir grapevines sit under a blanket of dense smoke from wildfires last week in Oregon's Arlyn Vineyard.

Wildfires are ravaging large swaths of the West in the middle of the wine grape harvest, sending hazardous smoke through picturesque vineyards.

It's forcing many agricultural workers to make a stark choice: Should they prioritize their health or earn badly needed money?

"The truth is that I have to work," said Maricela, 48, a team leader at a vineyard near Medford in southern Oregon. There are multiple fires blazing close to the town.

"It's not easy to work now," she said. "The smoke is so dense. ... I feel dizzy, my throat hurts and my head feels like it's going to explode."

Air quality is ranked as "very unhealthy" in this part of southern Oregon, according to the U.S. government air quality monitoring website Airnow.gov. Many of the agricultural areas in the West have seen plummeting air quality in recent weeks.

Maricela, who has already been forced to evacuate twice as a result of the fires, said her employer gave her the option to stay home without risking her job. But she said she has no choice. She hasn't been able to pay her electricity bill in three months, partly because she lost work hours due to the pandemic. She asked NPR not to use her last name, because like many agricultural workers, she doesn't have work documents.

Her employer told her it will pay her an extra dollar per hour because of the fires.

She said she can't think about the long-term health effects of the smoke. "I pray I stay healthy." Maricela said she doesn't have any preexisting health conditions; she doesn't have health insurance, either. "All I have are my hands to work," she said. 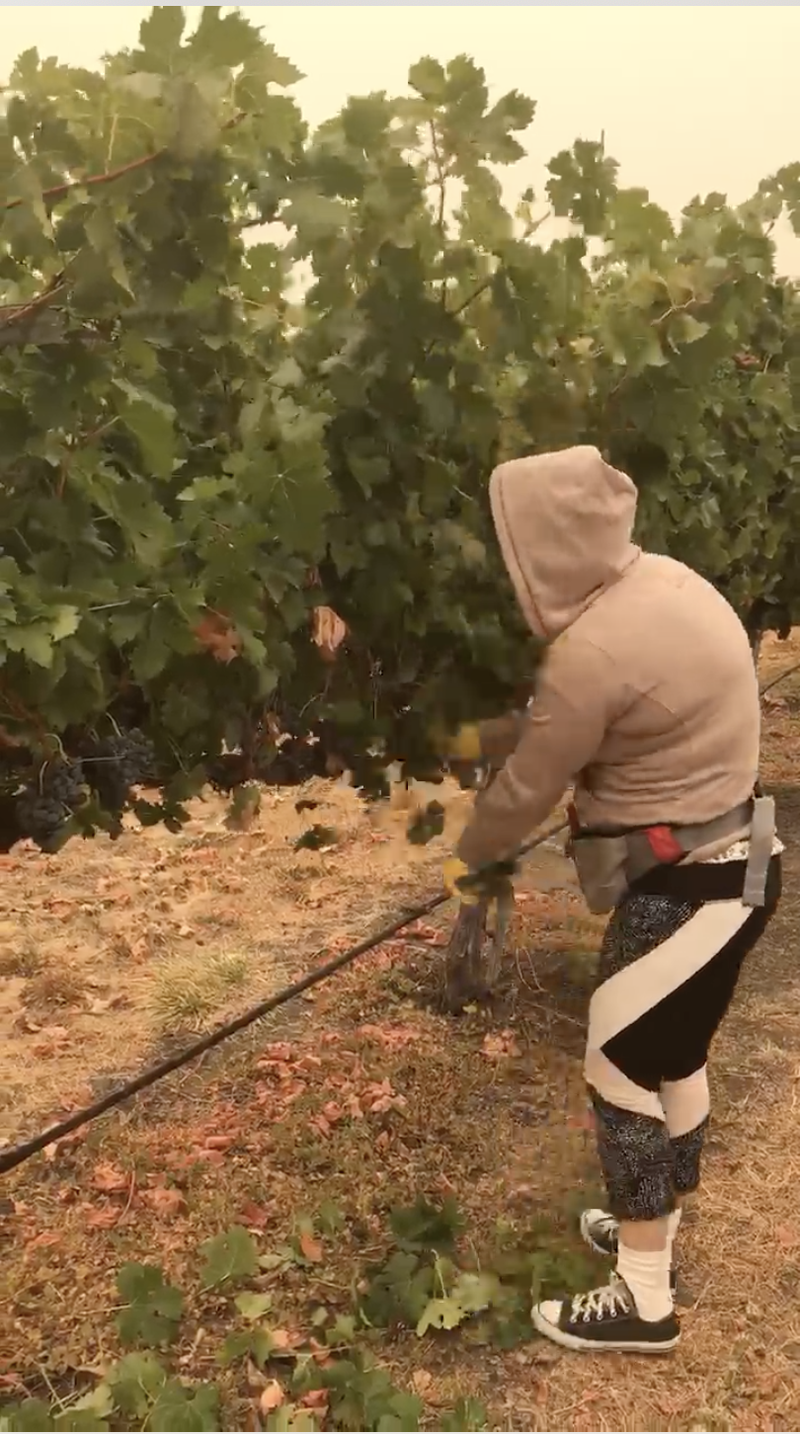 Maricela, shown here picking grapes in southern Oregon this week, says she can't think about the long-term health effects of the smoke from wildfires. She asked NPR to use only her first name because she doesn't have work papers. Maricela/Screenshot by NPR hide caption 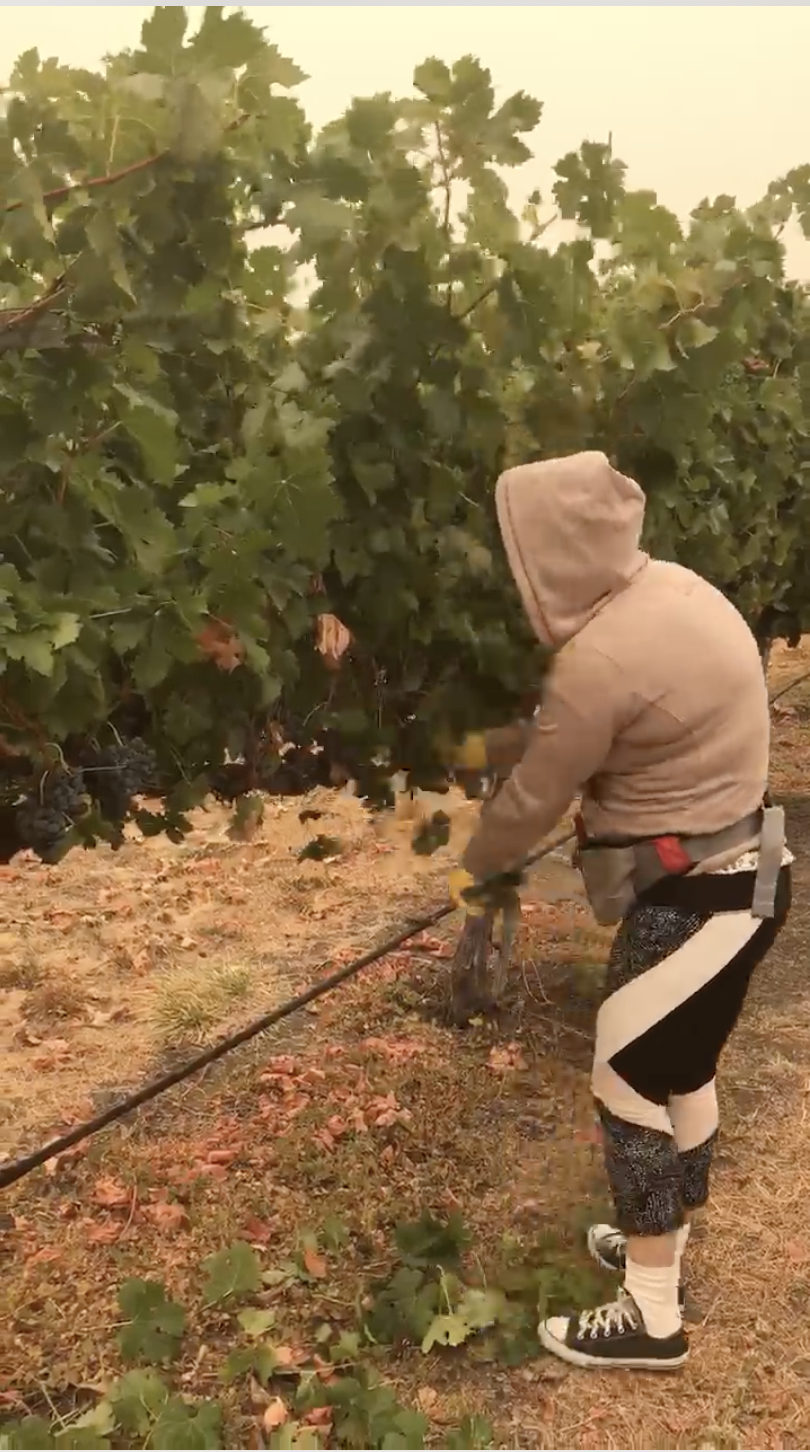 Maricela, shown here picking grapes in southern Oregon this week, says she can't think about the long-term health effects of the smoke from wildfires. She asked NPR to use only her first name because she doesn't have work papers.

More than 40 large wildfires are ravaging Oregon, Washington state and California, according to the National Interagency Fire Center, and have burned almost 4 million acres.

Agricultural workers are among the most vulnerable as the disaster unfolds, said Reyna Lopez Osuna, 33. She's the executive director of Pineros y Campesinos Unidos del Noroeste, which works to improve labor conditions for farmworkers in Oregon.

As the fires ramped up last week, "there were rumors and a lot of confusion of what was happening next," Lopez Osuna said. She said her phone was ringing constantly as workers frantically tried to figure out if they were required to come into work, even as evacuation zones shifted quickly.

One factor adding to the confusion is the lack of information in Spanish and Indigenous languages from Mexico and Central America such as Mam, Lopez Osuna said.

Counties were putting out emergency information on social media, she said, "but a lot of the farmworkers don't have Facebook or access to the best Wi-Fi."

More broadly, Lopez Osuna is alarmed about the impact of climate change on wildfires. It's causing them to burn more frequently and intensely. After this fire season settles, she said, "The industry needs to work on guidelines and protections for agricultural workers."

Juan shared this video of the wine grape harvest near Oregon City, OR. The nearby fires were stoked by high winds making for a dark and hazy day. When you buy wine, remember the farm workers that brought it to you. #WeFeedYou pic.twitter.com/ztxbufS8Y1

Lopez Osuna, the daughter of farmworkers who migrated from Mexico in the 1980s, understands that the wildfires also force employers to make difficult choices.

"There is a short timeline to pick these fruits and vegetables," she said. "It means that people and employers are having to make really tough choices."

"I couldn't expose them"

Janis Pate, owner of Arlyn Vineyard southwest of Portland, said she hasn't allowed her crew to work since Saturday.

"I couldn't expose them, I just couldn't in good conscience," Pate said, adding the smoke was too dense on her 40-acre vineyard. She sent them home on Saturday with pay.

The former corporate risk management executive-turned-farmer said there are still about 30 tons of grapes on the vines "that may or may not ever get harvested." That's about half of her annual crop.

Smoke can harm grape vines. Pate said she's testing her grapes for smoke taint. It's possible that she could lose up to $3,500 per ton of fruit.

Members of her crew has gone on to another job after their work at her vineyard stopped. "I felt defeated, I thought I was protecting them," she said, but added that she understands the calculations workers have to make.

Some workers are forced to stay home

As some agricultural workers pick crops through a blanket of smoke, others are waiting at home for a chance to work again.

"It's frustrating," said Elia, 38, who lives in Woodburn, Ore., and asked that NPR use only her first name because she doesn't have work documents. She usually picks blueberries and grapes, but her employer has canceled her work due to the fires.

The single mother of four hasn't been able to work in a week. It's particularly difficult timing because she lost seven weeks of work in March and April due to the pandemic.

Because of her immigration status, Elia doesn't qualify for federal aid. She's relied on help from organizations such as Pineros y Campesinos Unidos del Noroeste, which has provided her with about $1,200 and groceries to help her through this period.

"I would be in the fields now if it were up to me, I'd be working, breathing this thick smoke because I have no choice, I have financial needs," Elia said. She was coughing as she spoke to NPR, saying the smoke burns her throat.

"I'm behind in rent and other bills will have to wait," Elia said. "You work for survival, you work for every penny."