Accessibility links
Sally Brings 'Widespread' Flash Floods To Inland Areas After Causing Havoc On Coast "Widespread flash flooding and minor to moderate river flooding is likely" in parts of Georgia and South Carolina, forecasters say. They're tracking a new potential storm in the Gulf of Mexico. 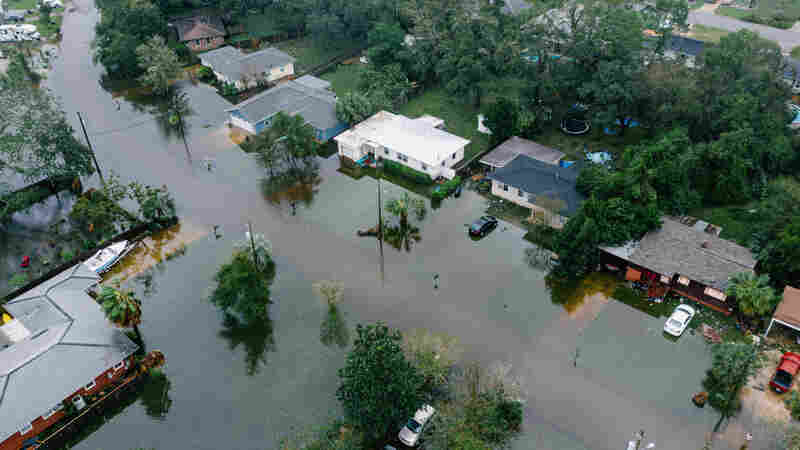 An aerial photo shows mass flooding in West Pensacola near the Bayou Grove and Mulworth neighborhoods in Florida. The area was hit hard by Hurricane Sally, which continues to cause flooding threats. Bryan Tarnowski /for The Washington Post via Getty Images hide caption 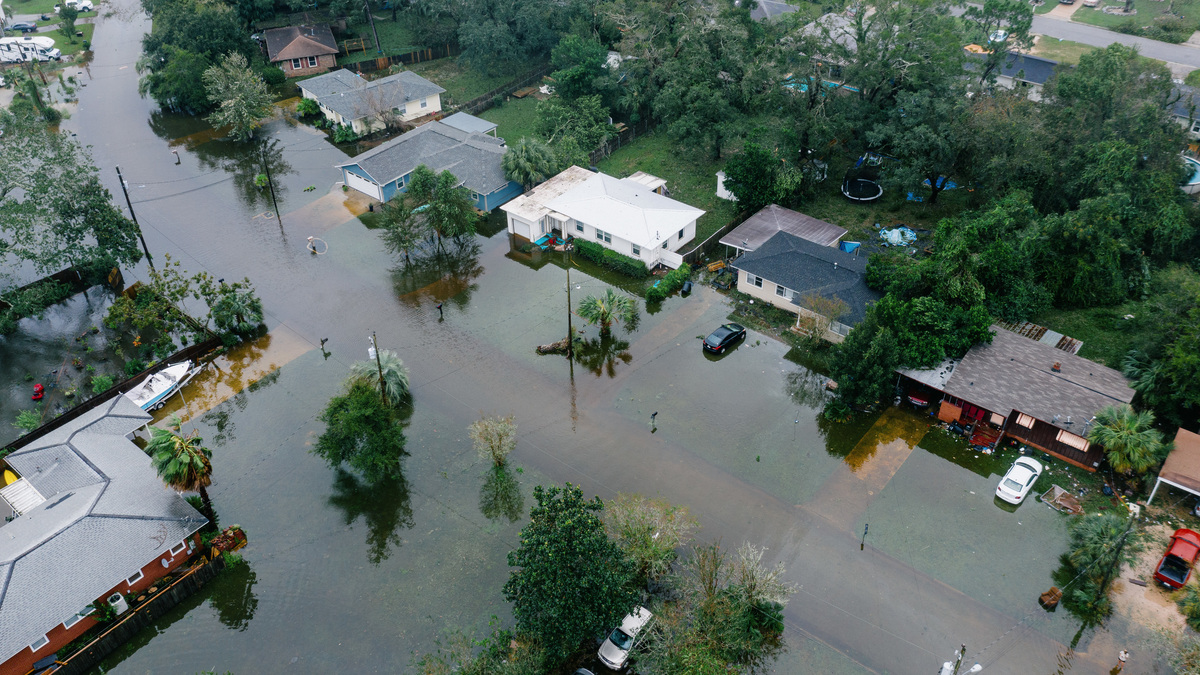 An aerial photo shows mass flooding in West Pensacola near the Bayou Grove and Mulworth neighborhoods in Florida. The area was hit hard by Hurricane Sally, which continues to cause flooding threats.

Bryan Tarnowski /for The Washington Post via Getty Images

The remnants of Hurricane Sally are dropping torrential rain on southeastern states — and its center was still in Alabama early Thursday, more than 24 hours after making landfall as a Category 2 hurricane. The storm has brought rainfall that is being measured in feet, not inches, in many places.

Sally is now a tropical depression, but it's bringing new flood threats to Georgia and South Carolina Thursday, the National Hurricane Center says.

"Widespread flash flooding and minor to moderate river flooding is likely" in parts of both states, the center says.

Hurricane Sally is blamed for causing at least one death, in Orange Beach, Ala. Officials there and in other hard-hit areas say they're having trouble getting a complete picture of the damage due to massive flooding, downed power lines, and streets that are littered with tree limbs and other debris.

The storm made landfall near Gulf Shores, Ala., exactly 16 years after Hurricane Ivan hit the same area.

Time lapse sequence from our cam on the Perdido River along Annex Road - just inside the FL line from AL. #HurricaneSally @NWSMobile @spann @googlenest pic.twitter.com/qHtdpssyR4

Nearly half a million electrical accounts are without power Thursday morning — most of them in Alabama and Florida, but also including more than 30,000 customers in Georgia, according to tracking site PowerOutage.us.

From Dauphin Island, Ala., to Pensacola, Fla., and nearby areas, residents, utility crews and emergency teams have started the cleanup process. Many roads, highways and bridges remain closed due to floods and wind damage. Towns and counties have instituted curfews for residents and are limiting travel and access, in a bid to prevent looting and sightseeing as recovery teams try to repair damage and help people in dire need.

"Communities like Dauphin Island are working to keep rubberneckers from crowding streets that are still flooded or blocked by down trees," Alabama Public Radio's Pat Duggins reports for NPR's Newscast. He adds, "Rivers like the Bon Secour, Magnolia, and Perdido are expected to hit record flood levels from Sally's slow slog across the region."

Flooding has been exacerbated by Sally's creeping speed – the storm came ashore at only 3 mph, bringing new rain to areas it had already soaked while lingering in the Gulf of Mexico. And the threat now includes more river flooding, thanks to the heavy rains falling inland and to the north.

"The amount of rain that's being dumped to our north is going to impact places in northwest Florida. You're going to have these rivers that are going to crest," DeSantis said. "Maybe it'll happen [Thursday], maybe Friday. You'll maybe even see some of them will happen this weekend."

Another tropical system is already in the process of forming in the Gulf of Mexico, the National Hurricane Center says. The system, just off Mexico's central east coast, has a 90% chance of becoming a tropical storm or depression. It would likely be named Wilfred if it strengthens into a tropical storm – the last name on meteorologists' list for the 2020 Atlantic season.

"An Air Force Reserve reconnaissance aircraft is scheduled to investigate the disturbance this afternoon," the NHC says.

The hurricane center is also monitoring two other disturbances far out in the Atlantic that have slightly lower chances of developing into cyclones. And it predicts Hurricane Teddy will become a major hurricane as it heads toward Bermuda, with an arrival time likely late Sunday or early Monday.

In addition to the massive amount of water Sally brought, many people in its path were surprised by two late-breaking developments as the storm neared land. Hurricane Sally's winds rapidly grew more powerful in the final 12 hours before landfall, intensifying from a low-powered Category 1 into a Category 2 storm. And Sally also shifted its course even more sharply to the east than many earlier forecasts had predicted, turning away from Louisiana and Mississippi to wallop Alabama and Florida.

"It was an unbelievably freaky right turn of a storm that none of us ever expected," Orange Beach Mayor Tony Kennon said late Wednesday. After running down a list of damage to his town, Kennon added, "24-36 hours ago, it was nothing but a rain nuisance in all of our minds. But what a difference 24 hours makes."