Accessibility links
Students Accused Of Breaking College COVID-19 Rules Fight Their Punishments As colleges crack down on students accused of violating strict pandemic safety rules, students are lawyering up to fight their punishments. 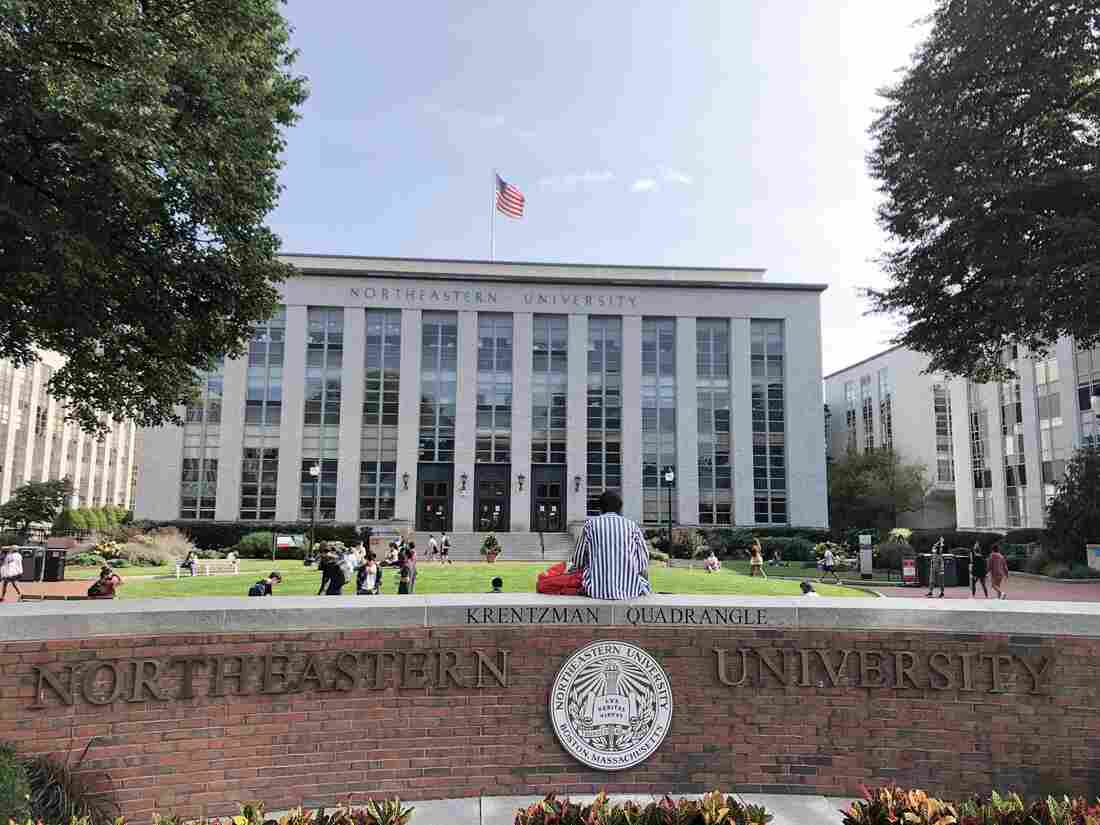 At Northeastern University, 11 students were caught hanging out together in one room, in violation of bans on having guests in campus housing and on participating in crowded gatherings. They were all kicked off campus and out of their program for the semester. Tovia Smith/NPR hide caption 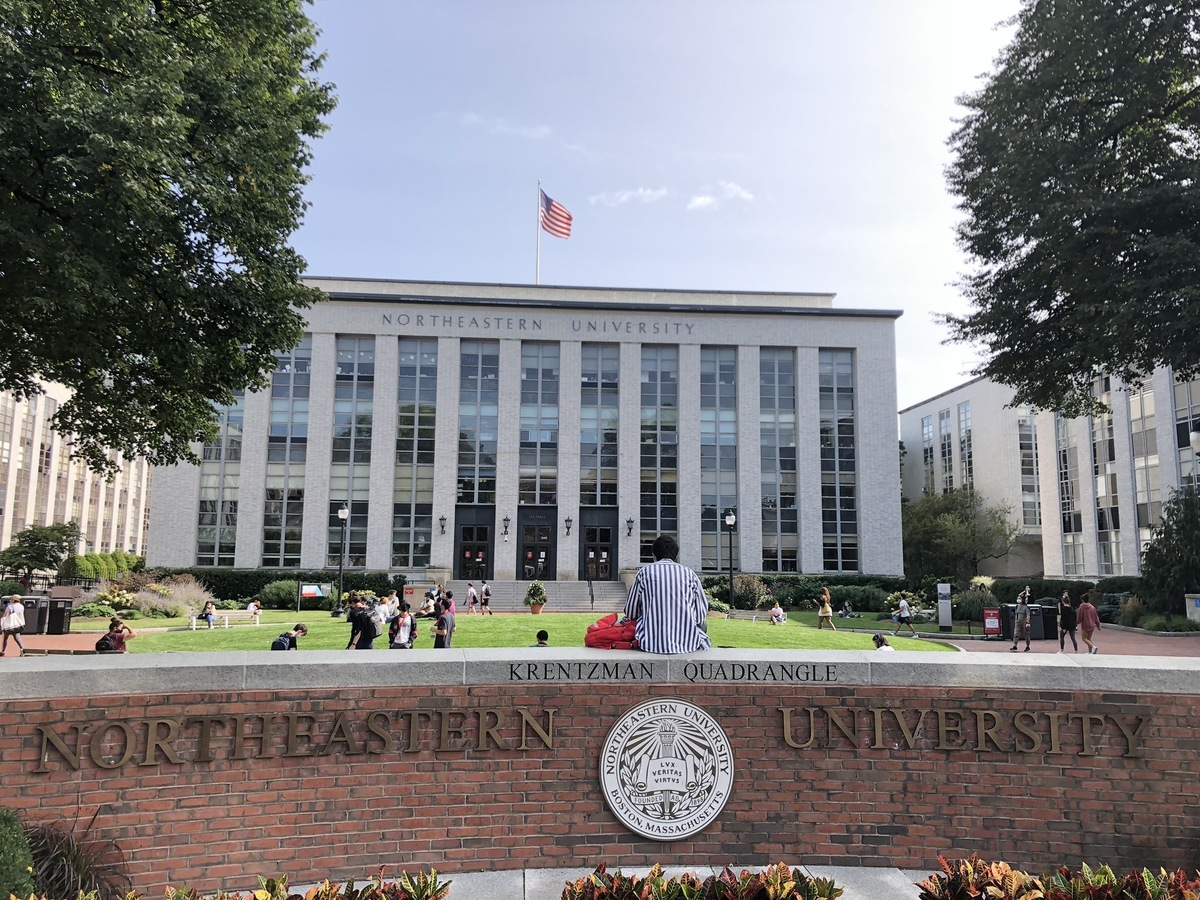 At Northeastern University, 11 students were caught hanging out together in one room, in violation of bans on having guests in campus housing and on participating in crowded gatherings. They were all kicked off campus and out of their program for the semester.

As colleges around the U.S. are facing COVID-19 outbreaks and crackdowns on students engaged in coronavirus-risky behavior, campuses are also facing a new threat: legal challenges from the students they're punishing.

Some are brazenly breaking rules, like the hundreds of Syracuse University students who risked everyone's safety — and everyone's semester — by partying like it's not 2020 in late August. Twenty-three students at that party got interim suspensions and were kicked off campus for what Syracuse officials described as "incredibly reckless behavior."

The same thing is happening to students at smaller, more "chill" gatherings. At Northeastern University, 11 students were caught hanging out together in one room, in violation of bans on having guests in campus housing and on participating in crowded gatherings.

"I was just, like, come on — that's really irresponsible and selfish," junior Avery Collard said about the students who were all kicked off campus and out of their program for the semester. Collard said they had it coming.

"There's very specific rules that say you can't do that," she said. "[They're] adults. I know it's hard, but act like it!"

But for all the scorn directed at students who flout the rules, the colleges meting out the discipline are taking heat as well. Rhyia Bibby, a junior at Northeastern, is one of many on campus who think the university went too far by also refusing to refund the students' tuition, which amounts to $36,500 per person.

"I think there are other ways to send a message than to take $36,000 away from incoming students," Bibby said. "I also think it's important that in freshman year, a bit of grace can be given."

Attorney Brett Joshpe, who appealed the suspension for two of the students, agrees.

"This is just a spiteful, gratuitous, grossly disproportionate penalty," he said, for students who were "just watching a basketball game with friends, with masks on."

Northeastern refused to budge on the suspensions but on Thursday notified the students that part of the money they lost could be applied to future tuition, if the students choose to return. University officials declined to comment on the case beyond their initial written statement saying that the students were repeatedly warned of the rules and the consequences. Joshpe called the university's response "totally unacceptable" and said his clients will be "evaluating all options."

Northeastern is hardly the only school whose tough disciplinary actions are under scrutiny. Attorneys say their phones haven't stopped ringing, and they've been hired to help students fight sanctions at other schools, from Syracuse University to New York University, Boston College, Penn State and many more.

"This has gone from a few cases here and there to a near epidemic," said attorney Andrew Miltenberg. He has long represented students accused of sexual assault, making the case that those alleged sexual predators were victims of a rush to judgment. Now, he says, schools are doing the same thing to alleged superspreaders.

"They're not allowing any discussion or any mitigating circumstances. People are being summarily suspended, and there is no due process," Miltenberg said.

How The Coronavirus Has Upended College Admissions

"We wonder if in a desire to continue collecting full tuition here, the students are set up to be the fall people here and they're being held to an impossible standard," he said.

For their part, schools insist that students do get due process — it just sometimes comes after the fact.

"These are different times, and we've got to make some emergency decisions based upon the facts available so that we can make sure other students are not at risk," said Kenneth Elmore, associate provost and dean of students at Boston University. Two groups of students recently got "deferred suspensions" for gatherings in dorm rooms, which is a kind of probation that puts them "one more bad act away" from being automatically kicked out, Elmore said. Those cases are still under review, but Elmore said, "That's pretty serious from our standpoint."

"For us, having six to eight people in less than 200 square feet is highly problematic," Elmore said. "And especially if those folks aren't face-covering. Sometimes people are going to make bad judgments, and we're going to have to, in those cases, be unforgiving."

But defense attorneys say investigations after the fact are often too late. In many cases, Miltenberg said, the damage is already done to students and their reputations, especially those students suspended for more questionable violations.

For example, Miltenberg said, he is representing one student who was suspended after he walked into his dorm's bathroom, not realizing that he was the seventh guy there and that he was putting the bathroom space one man over capacity. It was an accident, Miltenberg said; should students be expected to peek under the stalls and count feet?

"Students are truly bewildered. Can you take a shower? Can you use the toilet? It's all very vague," he said.

Boston University's Elmore concedes that making the call in certain cases can be difficult and that colleges are still figuring things out, just as students are. By nature, Elmore said, he's more the "moral suasion" type than a "drop the hammer" kind of guy. But, these are not normal times.

"I mean, personally this is really difficult for me," he said. "And I know it sounds weird coming from the person who is the apparent executioner, but we've got to do it. It's a way to say: No, we are serious about this."

But Elmore agrees that as schools become COVID-19 cops, they need to be extra-careful. With complaints already piling up about unduly harsh punishments, there are also concerns about uneven enforcement.

Darnell Cole, associate professor of higher education, administration and educational psychology at the University of Southern California, is recommending that schools closely monitor demographic data on their COVID-19 discipline cases.

"Those biases that exist external to the institution also exist within the institution, whether intended or not," said Cole. "I think we just know that, and we have to make sure we have equitable treatment that isn't racially discriminatory or biased or sexist."