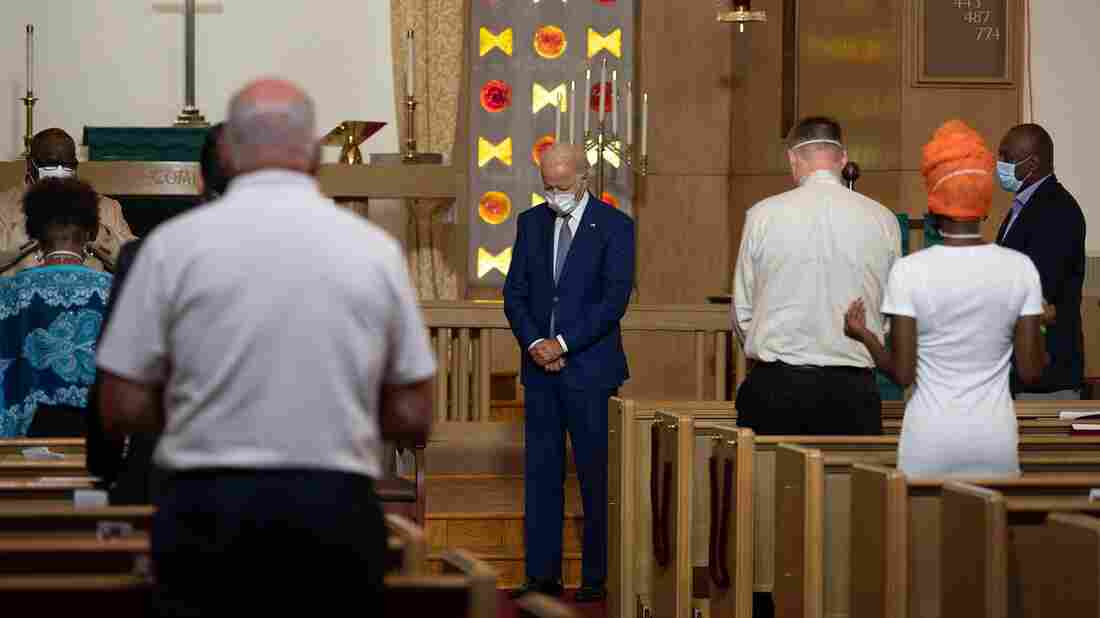 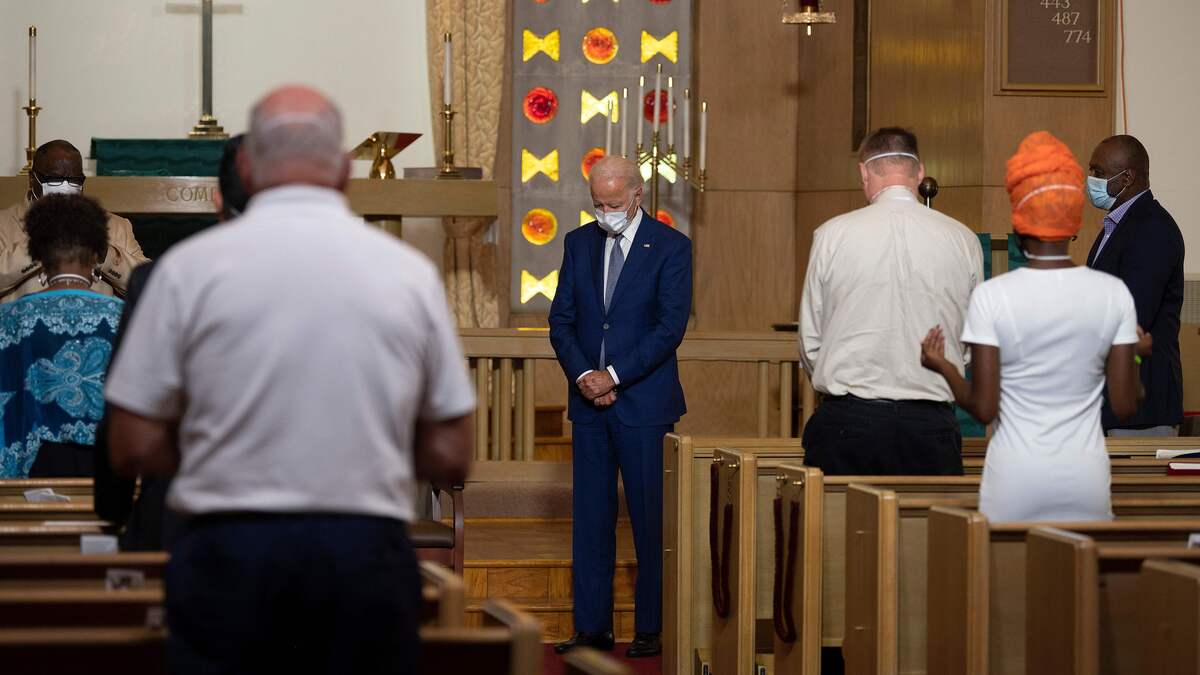 If elected, Democratic nominee Joe Biden would become only the second Catholic president in American history. Here he prays at Grace Lutheran Church in Kenosha, Wis., on Sept. 3.

When Joe Biden seeks to inspire or comfort, he turns to his faith. He speeches are woven with references to God, biblical language or the pope.

On Monday, the Democratic presidential nominee spoke to the faith-based anti-poverty group the Poor People's Campaign, and described the United States under President Trump as a "nation in the wilderness."

This wasn't a one-off religious reference; this is how Biden routinely speaks.

The former vice president launched his candidacy by referring to his campaign as a "battle for the soul of the nation." It was the central theme of his primary run, and remains a core tenet of his campaign. If elected, Biden would become only the second Catholic president in American history. It's not a detail he highlights, but people who know him well say his Catholic faith is central to how he sees the world.

Biden, who carries a rosary in his pocket and attends Mass every Sunday, is known as a deeply devout person of faith, and his campaign sees electoral implications in that — in part because Biden has tried to frame this election as a clear moral contrast between Trump and himself.

Some Democrats would go so far as to say that Biden is running perhaps the most overtly devout Democratic presidential campaign since Jimmy Carter in 1976.

John McCarthy, Biden's deputy political director, worked on faith outreach for Hillary Clinton in the 2016 election, and acknowledges Biden's campaign is different than others.

"Campaigns obviously stem from who a candidate is, and because this is such a true part of Joe Biden, this is something that is just in the core messaging of our campaign," McCarthy said.

Part of that distinction is about values and policy, but the other part is cultural.

"Part of him being who he is, he has these kind of touchstones that so deeply resonate with the kind of cultural Catholicism in those kind of places like the Ohio and Pennsylvania of the world," McCarthy said.

During Holy Week this past spring, the campaign released a video in which Biden spoke about faith seeing best in the dark, juxtaposed with images of the coronavirus pandemic. And when he delivered a eulogy for George Floyd and called for racial justice, he spoke of growing up with a Catholic social doctrine that taught him "faith without works is dead."

"It's not like we are just talking about faith to faith voters, but instead the vice president is being who he authentically is — which is a person of faith — and that is obviously coming across," McCarthy said.

Allies say Biden's faith informs his values and, in turn, his values shape his politics.

"Joe is someone for whom the ways in which he sees issues around racial justice, around the treatment of refugees and immigrants — all of that is connected to a view of other people — who he sees as neighbor, who he sees as being made in the image of God," said Delaware Sen. Chris Coons, who's known Biden for decades.

And so Biden's stances on a range of social and environmental issues, Coons added, are not "casual political positions;" they're informed by his upbringing and go back, he said, to "a deeply rooted sense of fairness that he learned from his parents and from the nuns and priests who educated and helped raise him."

Sister Carol Keehan, who's often credited as a key player in the passage of the Affordable Care Act when she was president of the Catholic Health Association, agreed.

"He's very clear about justice," she said. "When Joe Biden talks about faith, he talks very much about things like the Gospel of Matthew — 'what you've done to the least of my brother, you've done to me.' "

Friends and staffers say Biden focuses on faith, rather than religious doctrine; he prays with voters, rather than proselytizes.

And yet for some religious conservatives, all of that pales in comparison to the single issue of abortion. Earlier this week, the conservative group Catholic Vote released an ad referring to "Joe Biden's radical stance on abortion."

"Joe Biden would force American Catholics to pay for abortions, sacrificing his Catholic values to kneel before the leftist mob," the narrator warns.

Over his years in public life, Biden has become more consistently liberal on the issue of abortion. Last year, he reversed his decades-old position on the so-called Hyde Amendment, which bans federal dollars from funding abortion in most cases. Polling from the Pew Research Center finds that a majority of American Catholics believe abortion should be legal in all or most cases.

For his part, Trump has tried to portray Biden as a heathen. Last month the president attacked the Democratic nominee for being a man "against God." And more broadly, Trump and his supporters have made religion a cultural issue, painting Democrats as the party against religious freedom.

The struggle for Trump in trying to define Biden as a godless man is that Biden is the rather rare Democratic politician whose faith has been in public view for decades.

"I think one of the mistakes Democrats have made over decades is to be very private about the values that move them into public life," he said. "If we — as many Democrats in elected office have for 20 years — hide that or don't speak about it, millions of Americans are left wondering what drives you."

With Biden, staff and allies say, it's obvious what drives him.

Josh Dickson, national faith engagement director for the Biden campaign, says the former vice president "wears his values and his faith on his sleeve."

But it's also a tightrope for religious Democrats to walk. Fewer voters identify as Christian, as the share of people who identify with no religion has jumped in recent years, according to polling from the Pew Research Center. In 2019, almost 40% of Democratic-leaning voters were religiously unaffiliated.