Accessibility links
Washington Politics Could Be About To Enter A 'Post-Apocalyptic' Phase As if 2020 couldn't get any more politically contentious, a fight is underway over a Supreme Court vacancy — just 43 days until Election Day, and as Americans are already voting. 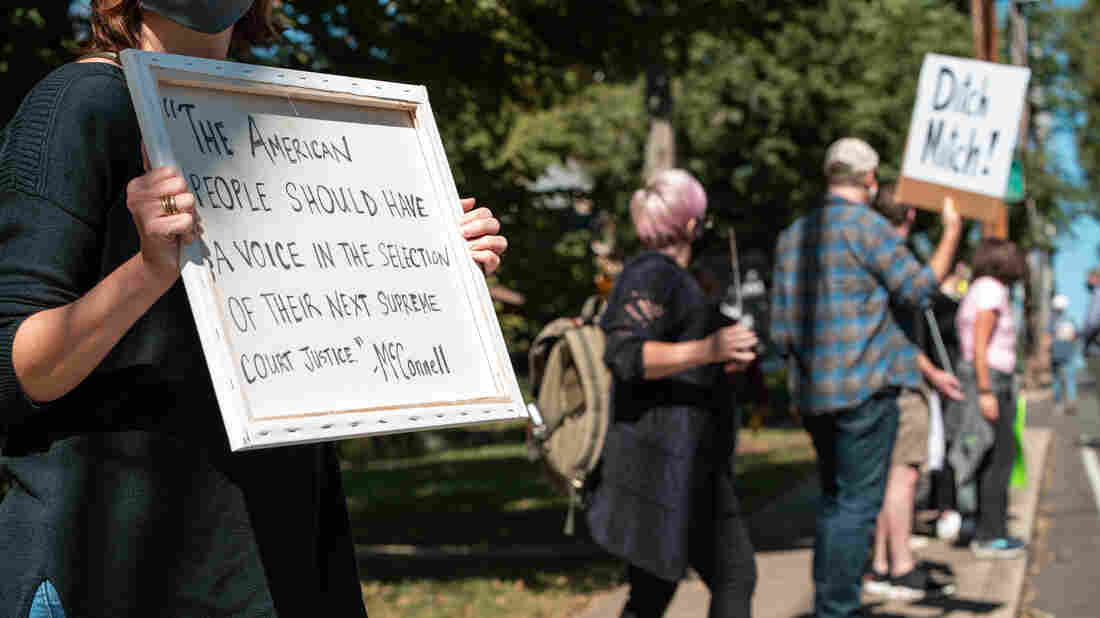 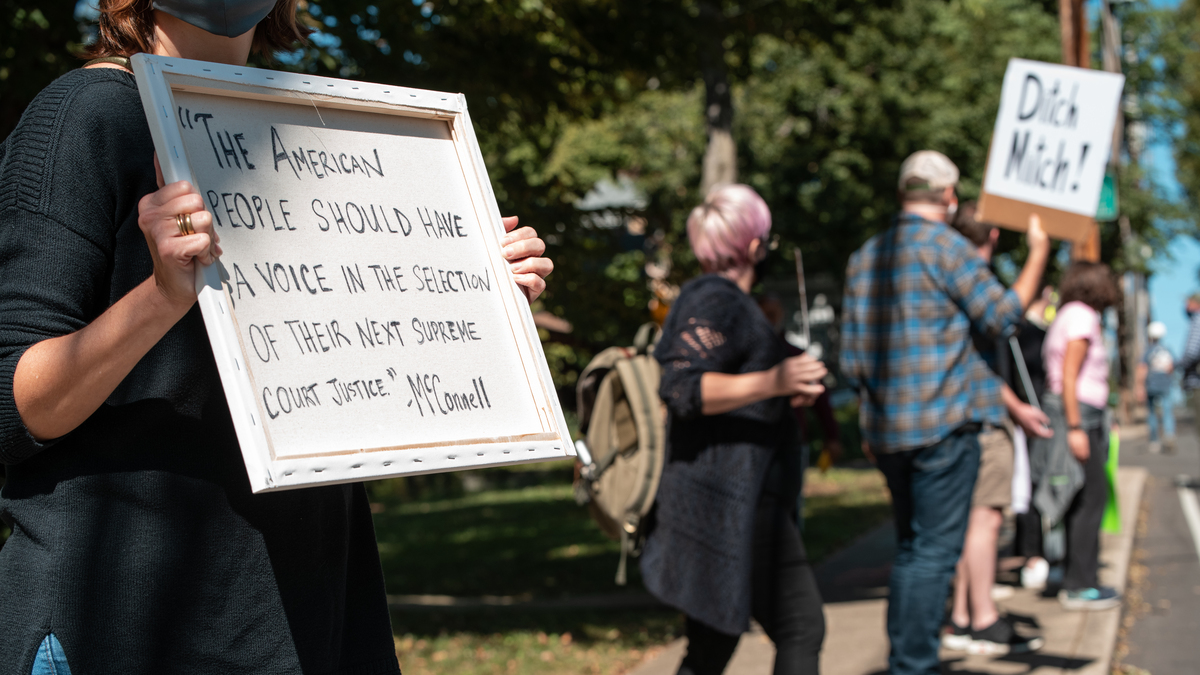 As if 2020 couldn't get any more politically contentious, a fight is underway over a Supreme Court vacancy — just 43 days until Election Day, and as Americans are already voting in some places during this election season.

Raising the stakes even more, this is not just any seat. It's the chair formerly held by Ruth Bader Ginsburg, the liberal and feminist cultural icon.

While in the minority on the court, Ginsburg became known for her dissents, and, in many ways, she embodied the spirit and strength of the resistance to President Trump. She stood against the social and cultural shifts conservatives have started to implement with Trump's two picks making the high court majority conservative.

As NPR's Nina Totenberg reported, Ginsburg dictated a statement to her granddaughter days before her death that read: "My most fervent wish is that I will not be replaced until a new president is installed."

A majority of Americans seem to agree with Ginsburg. A Reuters/Ipsos poll taken over the weekend found that 62% of American adults felt the vacancy should be filled by whoever wins the 2020 presidential election.

That, of course, is of little concern to Senate Majority Leader Mitch McConnell. Just over an hour after news of Ginsburg's death broke, the Kentucky Republican vowed to press forward on a Trump replacement.

"President Trump's nominee will receive a vote on the floor of the United States Senate," McConnell said in a statement.

That's despite not even allowing a hearing for President Barack Obama's pick to replace Antonin Scalia in 2016. That nominee, Merrick Garland, was the chief judge of the second-highest court in the country, the U.S. Court of Appeals for the District of Columbia Circuit, at the time of his nomination.

"I will be putting forth a nominee next week," Trump said at a campaign event Saturday in Fayetteville, N.C., after taking the stage to chants of "fill that seat." "It will be a woman. I think it should be a woman because I actually like women much more than men."

Barrett, who has been a federal judge in Chicago for three years, is seen by NPR's sources as a front-runner. The 48-year-old University of Notre Dame law professor and staunch Catholic was a finalist for the seat Brett Kavanaugh ultimately filled.

Democratic presidential nominee Joe Biden, a former longtime senator and Senate Judiciary Committee chair, called on Republicans in the Senate "who know deep down what is right for the country — not just for their party" to vote against a Trump nominee.

"Don't vote to confirm anyone nominated under the circumstances President Trump and Sen. McConnell have created," Biden said in a speech Sunday. "Don't go there. Hold your constitutional duty, your conscience. Let the people speak. Cool the flames that have been engulfing our country."

He added, "If I win this election, President Trump's nominee should be withdrawn."

There are plenty of statements Democrats will point to on how Republicans are operating with a double standard.

"If an opening comes in the last year of President Trump's term, and the primary process has started, we'll wait to the next election," Republican Sen. Lindsey Graham said in 2018 at a panel hosted by The Atlantic.

The tape has been held, but Graham has changed reels.

The senator from South Carolina and current Judiciary Committee chair, who's in a tough fight for reelection and who led the charge to confirm Kavanaugh to the Supreme Court, is unapologetically vowing to bring forward Trump's nominee.

"Harry Reid & Chuck Schumer changed Senate rules to try and stack the courts for Obama," Graham tweeted Saturday. "Now it's coming back to haunt them as I predicted. I'm dead set on confirming."

I stand by what I said in Jan. 2019: Harry Reid & Chuck Schumer changed Senate rules to try and stack the courts for Obama. Now it's coming back to haunt them as I predicted. I'm dead set on confirming @realDonaldTrump’s nominee. If you stand with me: https://t.co/MYF6qgyjdI pic.twitter.com/lsejlSs0QQ

There has certainly been very little consistency among Republicans on this. They are arguing that 2016 was different because different parties controlled the White House and Senate. This time, Republicans control both.

As a candidate, Trump cut through all that and was blunt about his calculation.

"If I were president now, I would certainly want to try and nominate a justice," Trump said during a February 2016 presidential primary debate after Scalia's death. "I'm absolutely sure that President Obama will try and do it. I hope that our Senate is going to be able — Mitch, and the entire group, is going to be able to do something about it."

He added, "I think it's up to Mitch McConnell and everybody else to stop it. It's called delay, delay, delay."

This is all about political power.

Remember, there's no filibuster anymore for Supreme Court nominations. McConnell blew that up to get Trump nominees Neil Gorsuch and Kavanaugh onto the court. So Republicans need a simple majority to get another Trump nominee through.

If Democrats stick together, Republicans can lose just three votes and still confirm a justice with Vice President Pence coming in to break a tie.

Two Republicans have already said they would hold firm and vote against a nominee because of the 2016 precedent of not allowing a vote on Garland — Susan Collins of Maine, who is in a tough reelection fight, as well as Alaska's Lisa Murkowski.

Democrats are hoping to persuade Utah's Mitt Romney, who has been a vocal opponent of Trump's, to do the same. But that leaves them one vote short.

Their hopes for a fourth got a little dimmer on Sunday when retiring Sen. Lamar Alexander of Tennessee sided with McConnell. He said he would have no problem voting for a Trump nominee as long as he or she is intelligent and of good "character" and "temperament."

"We have arrows in our quiver"

There isn't a lot Democrats can do procedurally to stop this, but they're going to try. Senate Minority Leader Chuck Schumer, D-N.Y., told his caucus in a Saturday night call that no options are off the table.

House Speaker Nancy Pelosi, D-Calif., on ABC's This Week did not rule out the possibility of going so far as impeaching Trump again or Attorney General William Barr. (Impeachment takes precedence in Congress, and an impeachment resolution would force the Senate to take up a trial and could, in theory, delay a nomination.)

“We have our options. We have arrows in our quiver that I’m not about to discuss right now,” Speaker Pelosi tells @GStephanopoulos when pressed on what Democrats would do if Pres. Trump and Republicans push a SCOTUS nomination ahead of the Nov. 3 election. https://t.co/MCxVZDHboU pic.twitter.com/9Rd1sXdIQW

"We have our options," Pelosi said. "We have arrows in our quiver that I'm not about to discuss right now."

Asked to clarify that she wasn't ruling anything out, she said, "Good morning. Sunday morning." She added, "When we weigh the equities, defending our democracy requires us to use every arrow in our quiver."

Some on the left want Democrats to threaten that if Biden wins the White House and they take over the Senate, they will play hardball. That includes eliminating the filibuster for legislation; passing statehood for Washington, D.C., to likely give Democrats two more senators; and passing legislation to expand the number of justices who can sit on the Supreme Court. (One bit of evidence for how fired up Democrats are: ActBlue says it raised more than $91 million in the 28 hours after Ginsburg's death.)

It's just the latest chapter in the Washington political arms race. McConnell justified ending the filibuster for Supreme Court nominees because former Democratic leader Harry Reid eliminated the filibuster for federal judges after record obstruction from the McConnell-led Republican minority.

As the formerly genteel modern Senate goes, that was considered "going nuclear."

If blowing up the filibuster for Supreme Court nominees was "going nuclear," we might be about to enter a phase of "post-apocalyptic" governance in Washington.