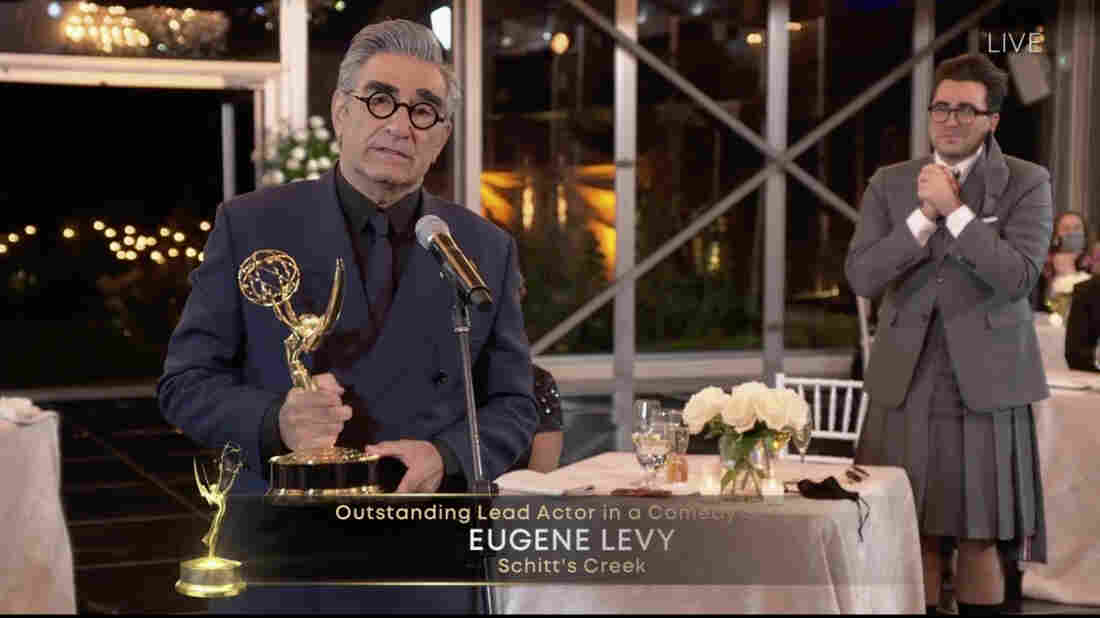 Eugene Levy accepts his award for lead actor in a comedy series for Schitt's Creek as his son (and creative partner) Dan Levy looks on at Sunday night's Emmy Awards. ABC via Getty Images hide caption 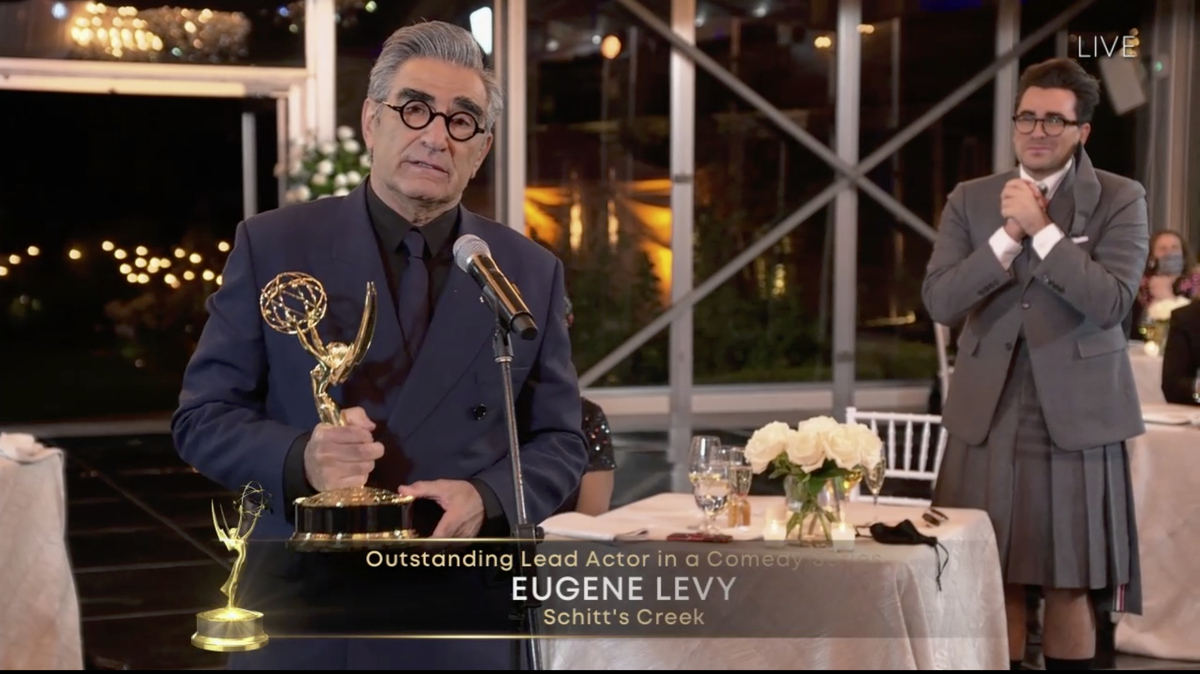 Eugene Levy accepts his award for lead actor in a comedy series for Schitt's Creek as his son (and creative partner) Dan Levy looks on at Sunday night's Emmy Awards.

In the pandemic era, the Emmy Awards are not the first major event that can't be a traditional shindig, but they're perhaps the most high-profile awards show so far to attempt quite this kind of socially distanced, mask-wearing, virtual ceremony. Host Jimmy Kimmel and everyone producing the broadcast had a pretty tough hill to climb in making it watchable.

And surprisingly enough, it was. It wasn't just watchable; it was ... pretty good.

The opening bit featured Kimmel apparently doing a typical Emmy monologue, but of course it was just a monologue that they mixed with old audience footage. While it probably went on too long (what doesn't?), it was a pretty effective way of easing people into this strange format, like going into a cold pool a few inches at a time. I wouldn't have come up with it as an idea, and it didn't seem like an especially good idea as it became clear what they were doing. But it looked better by the time they'd taken it through to Kimmel saying that, of course, they were not all together, there was not an audience, and they'd be mostly showing people in remote locations.

They did have a sort of skeleton crew on hand with Kimmel, with a few presenters there in person with him, including Jennifer Aniston, Anthony Anderson and Tracee Ellis Ross. The nominees in each major category were read, and then the nominees would be shown on camera at home, waiting to hear the results. The winners got to make speeches on video, just like the presentations you get to make at work.

But there was something kind of ... sweet about it. In some cases, with shows that had many nominations, casts and crews had gathered together, [mostly] wearing masks and in some cases (Watchmen was one) making sure you knew they'd been tested. The result, while it wasn't normal (what is?), achieved an intimacy and a genuinely unpredictable quality that is exactly what's missing in nearly every awards show.

What makes awards shows so bad, so long, such a drag so much of the time, is that they're supposed to be celebratory, but they usually carry a weird sense of obligation. They're often a fairly bloodless march through the categories, interrupted only by people pretending to laugh at bad banter.

For a number of years now, they've been clustering awards in each genre (comedy, drama, etc.) together, but they've held out the top prizes for the very end of the show. This year, they just gave everything out at once. That emphasized the sweep of the televised awards in comedy that went to Schitt's Creek, a show that never won a single Emmy award before this year, but this year took the comedy awards for lead actor (Eugene Levy), lead actress (Catherine O'Hara), supporting actor (Dan Levy), supporting actress (Annie Murphy), writing, directing and comedy series. For a show that was on for six seasons, seven Emmy awards is not a lot! One award in each of those categories is not a lot. It's just that they came all at once, and all in a row, and there's no way for that not to be boring, particularly if you don't adore Schitt's Creek (which, full disclosure, I do).

It's worth noting that there were other awards that went to comedies that weren't part of this broadcast — Insecure won one for editing, The Marvelous Mrs. Maisel won one for music supervision, and Eddie Murphy and Maya Rudolph both won for guest appearances on Saturday Night Live. But on the main broadcast, it was all Schitt's Creek, which did make for an awkward beginning. It didn't help that it came at the expense of a couple of very beloved shows, including Insecure and The Good Place, both of which have also been nominated and not won in previous years.

Things picked up a little as they moved on, although it was still a night with some pretty dominant properties. Watchmen won big with the top prize for outstanding limited series, plus well-earned awards for actress Regina King, supporting actor Yahya Abdul-Mateen II, and writing by Damon Lindelof and Cord Jefferson. Other winners in limited series were Uzo Aduba for her great work as Shirley Chisholm in Mrs. America and Mark Ruffalo for HBO's I Know This Much Is True.

Who Watches This 'Watchmen?' I Will, And You Should

In the drama field, Succession was the big winner for drama series. It also managed to avoid the danger of splitting votes between Jeremy Strong and Brian Cox, and Strong emerged the winner. Succession also won for writing and directing. It did not, however, go on a tear of the kind that Schitt's Creek did. Zendaya won for her very well-regarded turn in HBO's Euphoria, a welcome win for a younger actor who took the opportunity in her acceptance to acknowledge activism among her peers.

Vote-splitting may have led to the three Succession actors in the supporting actor category losing out. But winner Billy Crudup did have something working for him: He was the one consistently terrific thing about the high-profile but creatively shaky Apple offering The Morning Show. In the supporting actress category, Julia Garner won for Ozark, a show that's been a consistent awards performer for Netflix.

Roy, Oh Roy: That 'Succession' Finale Was A Trip

Sunday night wasn't necessarily an argument that every awards show should be made with all the winners at home. But it was certainly an argument that not every awards show has to look like the dry, fake-laughter-filled productions we get in every other year. One day, the crowds will return. But perhaps some of these innovations would be worth keeping.