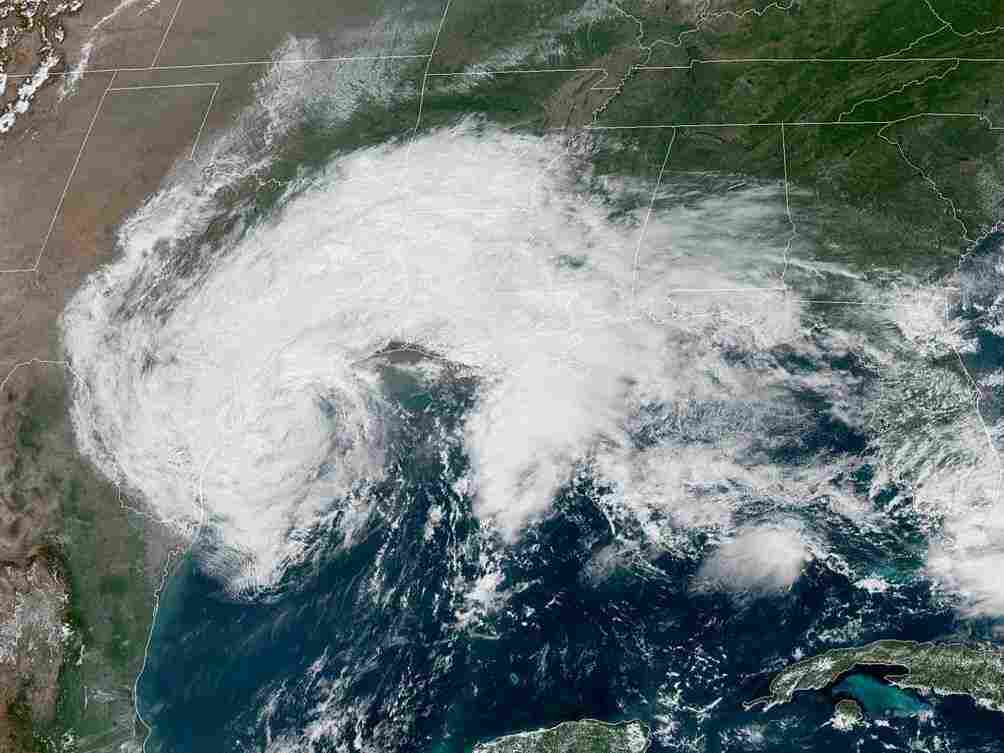 Tropical Storm Beta is expected to hug the coastline as it pours rain on the Gulf Coast of Texas and Louisiana. NOAA/NESDIS/STAR GOES-East hide caption 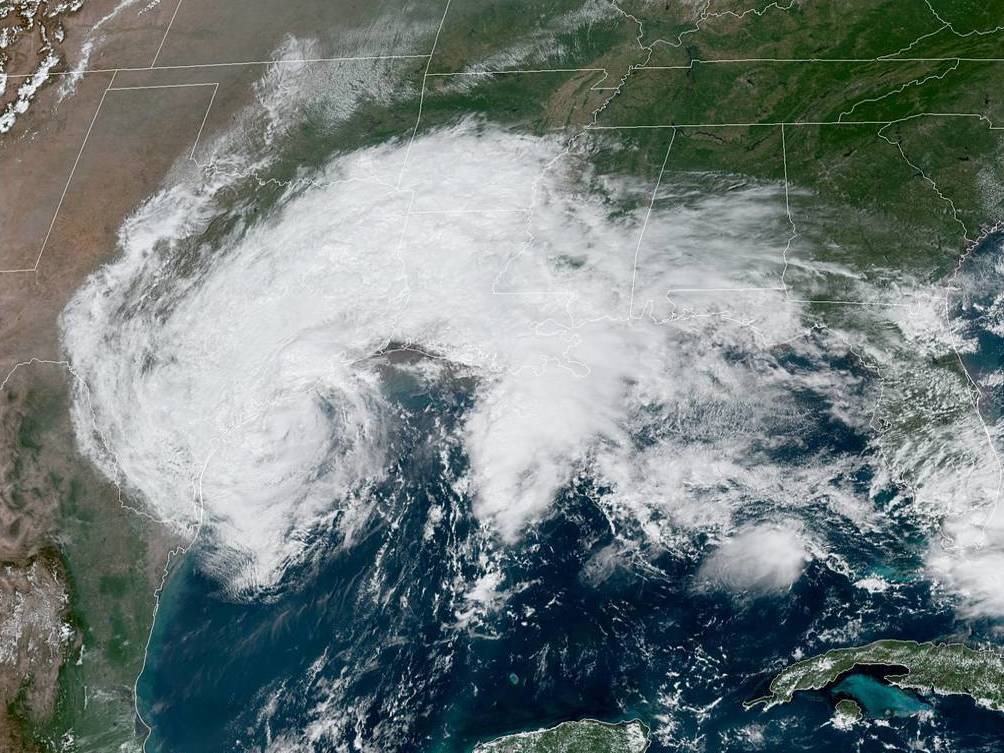 Tropical Storm Beta is expected to hug the coastline as it pours rain on the Gulf Coast of Texas and Louisiana.

Tropical Storm Beta's heavy rainfall and slow movement is raising the risk of flooding "from the middle Texas coast to southeast Louisiana," the National Weather Service said. Beta is heading for a part of Louisiana where electricity service for thousands of people hasn't recovered from being knocked out by Hurricane Laura last month. Some isolated areas could see 15 inches of rain.

"Houston saw steady rain for the most part on Sunday," Houston Public Media's Matt Harab reported for NPR's Newscast unit. "But the heaviest weather is expected to hit the northeastern portion of the Texas coast, by early this week."

Thanks to #TropicalStormBeta, you don't have to go far to kayak. Linda B. sent us this video from her back yard! If you have photos from Tropical Storm Beta, send photos and videos to us right through our KHOU 11 news app. https://t.co/AsNYAw6XlL #HTownRush #KHOU11 pic.twitter.com/qdPfKHDCqK

By Monday morning, coastal flooding had already begun along the Gulf of Mexico and in bays near Houston and Galveston, the National Weather Service office in Houston said.

Tropical Storm Beta is about 25 miles southeast of Port O'Connor, Texas, with sustained winds up to 45 mph, the National Hurricane Center said in an update Monday afternoon. It's moving northwest at 5 mph.

The morning's view of Tropical Storm Beta off the Texas Gulf Coast. pic.twitter.com/YgKQe24WJ0

The storm could bring a life-threatening storm surge. Areas from Port Aransas to Sabine Pass, Texas, are under a surge warning. The worst-hit spots are projected to see water rise 2 to 4 feet above normal levels, the hurricane center said. The warning zone centers on Matagorda Bay and Galveston Bay, but it extends south near Corpus Christi and north to the Louisiana border.

Louisiana Gov. John Bel Edwards declared a state of emergency Monday in advance of the storm's arrival, saying the flood threat "could be especially problematic in areas that are already recovering from Hurricane Laura and residents should take this threat seriously."

"The storm should finally push east of the area Wednesday afternoon or night, and we'll see improving conditions at that time," according to meteorologist Dan Reilly of the National Weather Service office in Houston.

1:50 PM Radar: Moderate to heavy rain associated with #Beta continues to push into the region early this afternoon.

Beta is forecast to slow down and hug the coastline, with its rainfall presenting a serious threat to low-lying coastal communities. Through Friday, it will likely drop 5 to 10 inches of rain as it moves from the Texas coast to southeastern Louisiana.

"On the forecast track, the center of Beta will continue to move toward the central coast of Texas today and will likely move inland by tonight," the hurricane center said. "Beta is forecast to remain close to the coast of southeastern Texas on Tuesday and Wednesday."

Beta is heading for some of the same areas affected by Hurricane Laura. Nearly 9,000 electricity accounts in Louisiana's Calcasieu and Cameron parishes remain without power from that storm, according to regional utility Entergy. Laura made landfall just east of the Texas-Louisiana border.

The oncoming storm will likely trigger flash and urban flooding, the weather service said; it could also spin off one or two tornadoes.

Beta's name comes from the Greek alphabet — the World Meteorological Organization exhausted its list of Atlantic storm names for the 2020 season after Tropical Storm Wilfred was named last week. There has already been an Alpha storm – the short-lived system formed near Portugal on Friday.