Accessibility links
'White House, Inc.' Author On Trump's 'Million Potential Conflicts' Dan Alexander of Forbes examines the president's sprawling business interests in a new book. He says Trump has broken a number of pledges he made about how he would conduct business while in office. 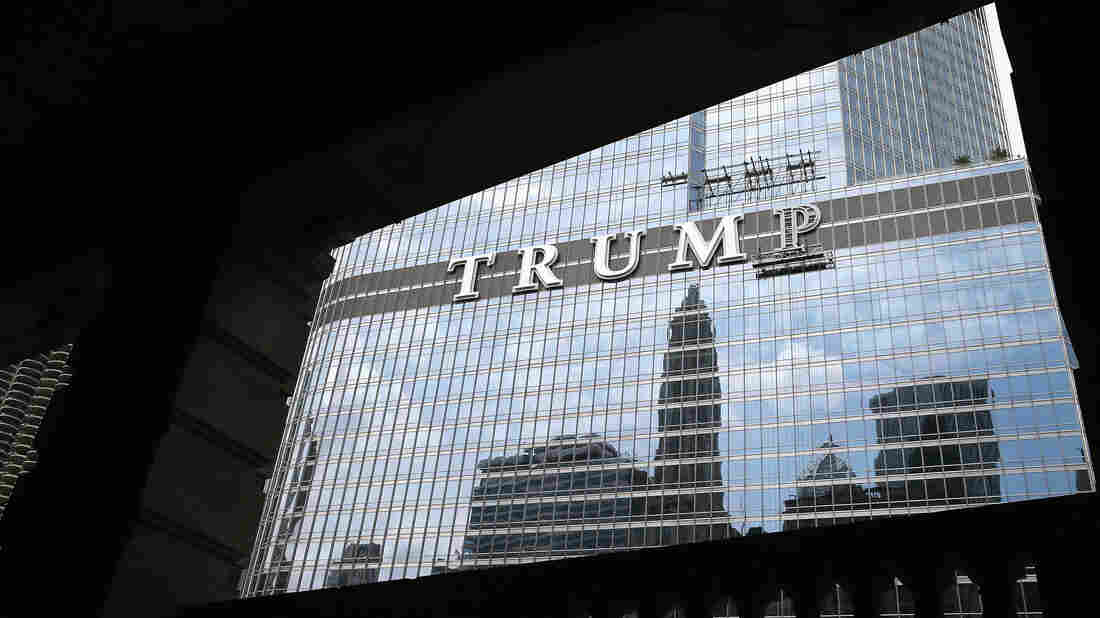 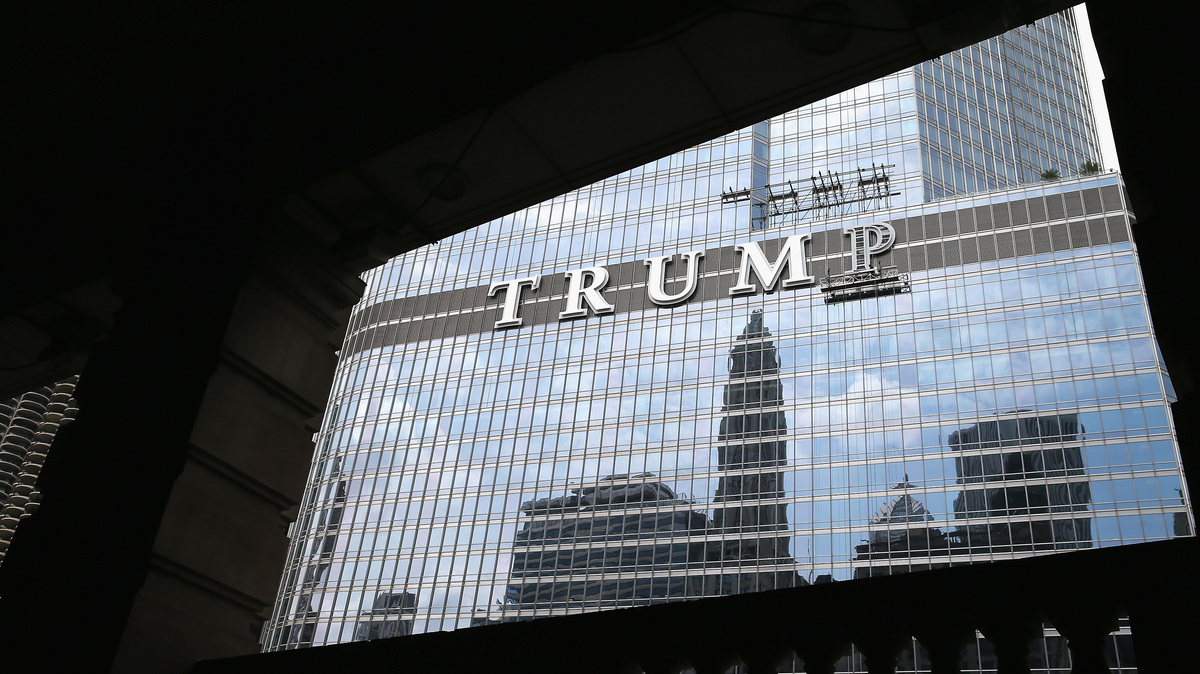 Forbes journalist Dan Alexander writes about the president's potential conflicts of interest in White House, Inc. "You can't have a blind trust and have a building that says 'Trump Tower' on the outside of [it]," Alexander says. "How blind is that?"

Past occupants of the White House have placed their business holdings into a blind trust. Not President Trump.

Forbes magazine investigative journalist Dan Alexander has pored over business records, mortgage documents and government reports — and even staked out some Trump properties — to assemble a detailed picture of the president's business interests. He says the president has broken a number of pledges he made about how he would conduct business while in office.

As for Trump's suggestion that he would donate all profits from foreign governments to the U.S. Treasury? Alexander says that hasn't happened either.

"If you just do the math on the rent that flows in from the Industrial and Commercial Bank of China, which rents space on the 20th floor of Trump Tower, and then you look at what the profit margins are on rent flowing into that building, you can see that just that one lease alone means that more than three times as much money from China is flowing into Trump's coffers than his business has donated in what it says are its profits from foreign governments," Alexander says. 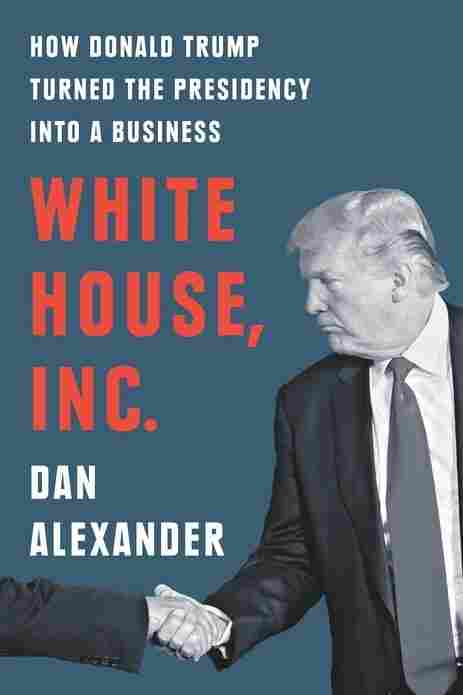 On whether or not Trump is a billionaire

Yes, Trump is a billionaire. ... If you go through his assets and you look at what he owns and you look at the income that they throw off and you look at the value of other similarly traded assets, it's just a math equation. You get to the end, and you find that he's worth $2.5 billion. It's nowhere near what Trump says he's worth. He'd like to imagine he's worth $10 billion or something like that. But it's also not true what his critics say, that he's broke or that he's never made a dollar in his life. It's just an example of liberals doing what they get frustrated about conservatives doing, which is not looking at the facts and adding up the numbers and just going with what the data says. And if you look at his business, what the data says is that he's a billionaire, but not ... as rich as he claims.

So there are some disclosures that all officials have to make. They have to list, for example, all of the companies that they own and they have to give some information about either the revenues or the profits that those companies generate. And so we know what he owns. We know a little bit from that about how profitable these companies are. But you've got to go to a whole range of other documents to put together the full picture and understand really what his empire is, how much money it's generating. And then what they don't require, of course, is to show your tax returns. They also don't require you to say, for instance, who's putting money into those companies that you own. It's a very simple loophole that allows Donald Trump to basically follow the law without much disclosure about who's actually paying him, because all of the money flows through shell companies.

If he were to truly have a blind trust, you can't have a blind trust and have a building that says "Trump Tower" on the outside of [it]. How blind is that? We can tell what you own. ... So you would have to divest those assets handed over to a trustee and then let that trustee invest in whatever they decided made the most sense based on what your financial goals were. So it could be an index fund, could be bonds, but something that wasn't readily recognizable to everyone, including yourself. ...

If you just think about it, how many business owners who are in their mid-70s are really on a very active day-to-day basis managing their businesses, especially ones that have other interests? Not that many. So what Trump has done, where he's basically handed over the keys to his kids, well, that's what anyone who is still in the business would probably be doing anyway. So there's really not a whole lot of separation there. And ultimately, the question is who controls the money? And the person who controls the money, who owns the money, is the president.

The Trump Organization and the White House won't release a list of the president's tenants, and by law, although the president has to disclose, for example, that X shell company or Y shell company is providing him with, say, over $5 million of revenue, they don't have to get more specific than that. They also don't have to then say who's putting money into those shell companies so you don't know who the tenants are. And then if you go to the buildings, you can see, for instance, like the retailers on the bottom floor. And so I did. I went to the buildings, and I walked to try to figure out how big some of these spaces were. I paced out with my boots — boot over boot — and measured the length of my boot to try to estimate what the square footage was.

And then you could figure out what the market rate was per square foot and estimate how much money this tenant might be paying the president. That's how you have to figure out how much money is flowing in from here.

But then on the upper floors, especially in office buildings, a law firm or a bank isn't going to put "Barclays" on the side of the building. So most of the money is stuff that's happening up above in the sky, and you can't see that. ... It's really difficult to figure out who's in there, how much space they have and then what they might be paying.

It's a big puzzle, but ultimately, through a lot of different methods, we've pieced together and identified more than 150 different tenants accountable for an estimated $177 million of revenue per year.

If you look across the more than 150 different tenants, at least 35 of those tenants lobbied the federal government while their landlord was in office. At least 30 of them received more than $8 billion in federal contracts. You have hundreds of millions of dollars flowing into Trump's empire and billions of dollars flowing from Trump's administration to these companies. At least 17 faced federal investigations while their landlord was the president, and four government entities were renting space in Trump buildings.

On the conflicts of interest statue not applying to the president

[There is] the federal conflicts of interest statute, which says that you can't take any actions that will clearly benefit you personally or your spouse. But there's an exemption to that rule for both the president and the vice president. So every other vice president or president has acted like it pertained to them anyway, just because of the optics of it. It looks terrible. But Trump did not choose to act like it pertained to him. And there's no legal restriction on him benefiting from his own power, while he's doing something to push money to his own properties. It's not that he is totally free of any rules. There are some other things that he can't do. ... He can't participate in bribes. He can't violate the foreign emoluments clause. He can't violate the domestic emoluments clause, but that basic conflicts of interest statute does not apply to the president.

On Trump's investment in golf courses

I think of Donald Trump's golf strategy sort of in the way that you might think of other billionaires' yacht strategy. They like toys. Donald Trump loves to play golf, and he loves to buy golf courses. He loves to own golf courses. He loves to arrive in golf courses on his helicopters and have everybody come up to him and have him be the man. That's something that really exhilarates him. And so he puts a ton of money into the things. Some of them have been decent investments. He made a couple in the middle of the recession that were OK. But by and large, it looks like it's just been a terrible investment. Most yachts aren't good investments either. I guess billionaires have their vices and their things that they want to pursue. But from a business perspective, Trump's golf portfolio does not make a whole lot of sense.

On how Trump's Miami golf course and resort, Doral, has taken a hit since he took office

It's one of the most consumer-facing businesses that he has. And as a result, after he becomes president and alienates half the country — including a lot of people in the Northeast, where Doral had historically drawn huge numbers of customers — then the financials just plummet. The revenue goes way down, the profits go way down. His profits drop from about $13 million in 2015 to $4 million and some change in 2017. And that's a huge, huge gap for somebody. His own tax representative says that the reason why is because his comments offended so many people that they're not booking like they used to.

On how Trump is perceived as a businessman

Donald Trump's business is sort of a Rorschach test. You can look at it and see what you want to see. He has done terrible businesses that have lost a lot of money. He has done great businesses that have made a lot of money. But what my job is, Forbes, is to sit down and just look at the numbers and figure out what are the value of these assets, what is the amount of debt that he has. ...

There's no question that [Trump] has done business in a way that is unethical and that a lot of business people would (and do) shake their heads at.

If you go through the properties and you look at: Here's what he owns. Here's how much it brings in. Here's what it's worth. Here's the mortgages on it and here's the debt. And you just add everything up. ... It's a real business. I mean, this is not a made-up fantastical thing. He did inherit a ton of money, and he would be very, very rich, even if he had just taken that money and just invested in the S&P 500. But there are a lot of rich heirs who walk away poorer than the day that they inherited the money. And Donald Trump, to his credit, is now richer than he was when he inherited the money. ...

There's no question that he has done business in a way that is unethical and that a lot of business people would (and do) shake their heads at.