Accessibility links
The Church Of St. John Coltrane Has Preached Jazz Gospel For 50 Years In 1965, two young fans heard the jazz giant play at a San Francisco club and had a religious epiphany. Their church is an idiosyncratic and joyful blend of devotion to the divine — and to jazz. 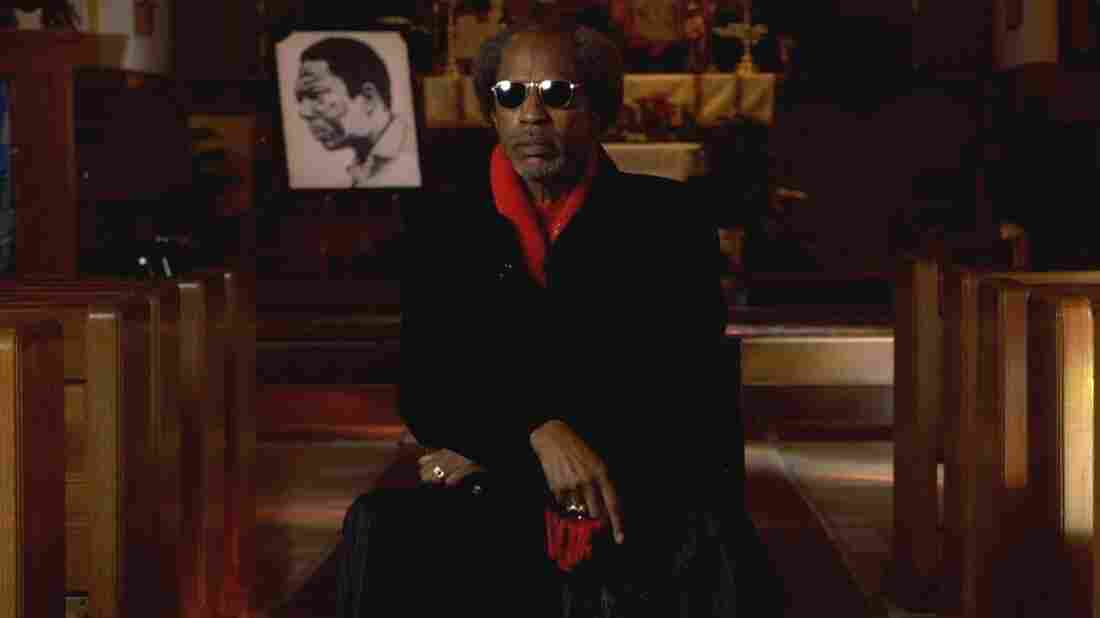 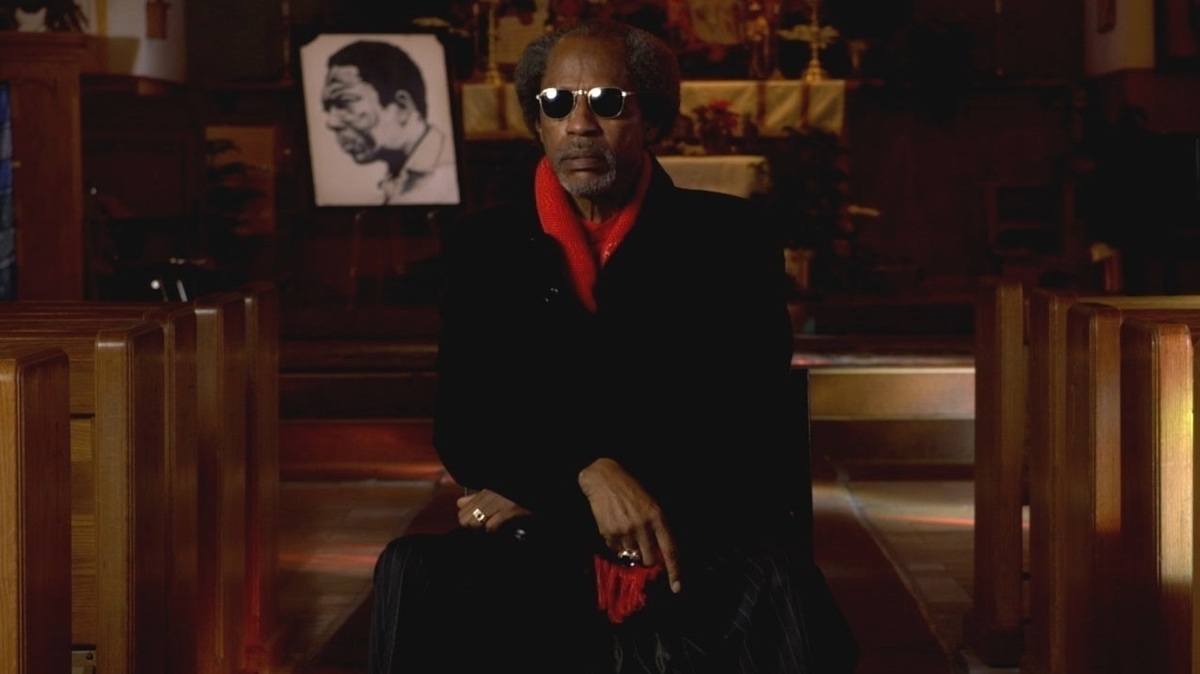 Archbishop Franzo King who, with his wife Marina, co-founded the St. John Will-I-Am Coltrane African Orthodox Church, in a portrait shot in Jan. 2020.

Today marks what would have been jazz giant John Coltrane's 94th birthday. Two years before his untimely death from liver cancer in 1967, a young San Francisco couple heard him play — and their experience was literally religious.

They founded a spiritual community inspired by his music and 50 years later, they're still preaching that gospel at the Coltrane Church in San Francisco.

Franzo and Marina King were already jazz fans on the night that changed their lives. This was back when San Francisco was the Harlem of the West, and the Fillmore District was packed with places to hear jazz. On the couple's first wedding anniversary, in 1965, they went to hear John Coltrane play.

They managed to get seats in the front row. And that night, they say, the Holy Spirit walked out with Coltrane onto the stage of the Jazz Workshop.

"I think we were both slain in the spirit," Franzo King recalls. "It was like getting caught up in a rainstorm. And we didn't know if it was going to bring a flood or flowers."

Both Franzo and Marina came from devout families. Franzo's mother was a Pentecostal minister. Marina's family was deeply rooted in the Episcopal Church. (Marina also could lay claim to a jazz lineage: her father was a trumpeter, and her uncle, Fred Robinson, was a trombonist who played with Louis Armstrong on some of his Hot Five recordings, including on the seminal "West End Blues.")

On that night in San Francisco, the Kings say, they experienced an awakening, thanks to Coltrane's horn. They call it their "sound baptism."

The Kings saw the Holy Trinity — Father, Son and Holy Spirit — in the titles of the first three sections of A Love Supreme: "Acknowledgement," "Resolution" and "Pursuance." And they perceived the Trinity in the three building blocks of Western music: melody, harmony and rhythm.

This was also the 1960s — and it was San Francisco. In that cultural crucible, they forged a fluid spirituality. They practiced japa, writing sacred words over and over again as a means of meditation in the Hindu tradition. They pored over the teachings of Hazrat Inayat Khan, a Sufi Muslim mystic. They fasted and prayed for long periods. "When we first started out, our religion was Haqqism," King says. "Haqq is Arabic for 'truth.' 'Ism' puts it into practice. That was our religion. The truth is above labels."

But these days, when King preaches at a joyous Sunday morning service, it's with the cadences of his Pentecostal background.

"I wouldn't have known who John Coltrane was if I hadn't had that Holy Ghost experience in the Pentecostal church," King tells his congregation. "And I would be remiss as we give thanks to God for John Coltrane to not do what he did, and point us to Christ, who points us to God, who points us into the Oneness of this universe."

Byzantine-style icons, including ones of John Coltrane, the Virgin Mary and Jesus at the Coltrane-devoted church. Anastasia Tsioulcas/NPR hide caption

The Kings' love of jazz fed their belief system. Franzo King compares another great saxophonist — Charlie Parker, who was slightly older than Coltrane — to John the Baptist.

Calling Parker by his nickname, he says, "When I heard Bird do 'Laura' with strings, I cried. I wept. Bird prepared our hearts and our minds for the coming of this man that they call John [Coltrane]. Bird revolutionized the music, right? But he also opened up our hearts. 'Now's the Time' is more than the title of a tune." (Early iterations of their community's name included the Yardbird Club — an underground, after-hours jazz club the Kings founded — and, more spiritually, the Yardbird Temple and then the Yardbird Vanguard Revolutionary Church of the Hour.)

Marina — who now goes by Supreme Mother Reverend Marina ---- says that from the beginning, their message was also about social activism.

"We started feeding the people," she says. "We knew that to be right with God was to be right with the people. And so we began free vegetarian meals, hatha yoga, counseling. Sisters would come together, making quilts and baking bread, and giving it out free."

And as a Black couple, they were making their own community in the midst of challenging circumstances. "It was a time of great civil unrest," Marina King continues. "It was the 1960s, 70s. Racism was rampant, police brutality. We were young — we wanted to make some changes in those areas. And John Coltrane's music gave us that spiritual energy that we needed, that platform that we needed, that encouragement, the teachings that we needed."

The Kings eventually met Coltrane's widow — the musician Alice Coltrane. They came to regard her as their guru and became members of Alice Coltrane's own religious community, the Vedantic Center, which was based on her interpretation of Hindu beliefs. The Kings even recorded Hindu devotional songs with her.

But that oneness began to unravel; there were theological splinters. In 1981, Coltrane sued the Kings for using her late husband's name and likeness. The lawsuit was later dropped. But the publicity spurred an invitation to the Kings church to join the African Orthodox Church (AOC), a denomination of principally Black American adherents that was founded in the early 20th century by Black Episcopalians who were put off by racism in the dominant church.

As a condition of joining the AOC, the Kings had to reduce John Coltrane's rank from God incarnate to patron saint. Franzo King — now known as Archbishop F.W. King — agreed.

In September 1982, Coltrane was officially canonized as a saint by the AOC. But in talking to the clerics at the Coltrane church these days, you hear a panoply of perspectives.

"We recognize that John Coltrane is a saint, because we have been born anew in the spirit of the Lord, and baptized in that anointed sound," Archbishop King says. "We don't worship him, and we don't exalt him. We recognize him. When I grew up in that sanctified [Pentecostal] church, everybody that had been saved is what we would call sanctified, filled with the Holy Ghost. The Pentecostal church wasn't waiting on a bunch of Roman cardinals to get together and count miracles."

A Byzantine-style icon of John Coltrane at the church. The inscription to the left and right of Coltrane's body reads, in Greek, "St. John." Anastasia Tsioulcas/NPR hide caption

A Byzantine-style icon of John Coltrane at the church. The inscription to the left and right of Coltrane's body reads, in Greek, "St. John."

The Kings' daughter, Rev. Wanika Stephens, says, "We look at Jesus' life and how he lived it as an uncompromising revolutionary, speaking truth to power and giving his life ultimately for the freedom of humanity. John Coltrane, in so many ways, was an expression of that same spirit and evolutionary transcendent expression of the spirit that we see in Jesus Christ."

Rev. Stephens says that, for her parents, Coltrane was a vessel. "His life allowed young people like Archbishop King and Reverend Mother Marina to see the spirit of Christ in another way," she continues, "to see truth coming from something that looked like them, something that spoke to them in their language." Jazz was that language.

Father Max Haqq joined the congregation in 1991, first as a jazz fan before becoming a deacon and ultimately a priest. "John Coltrane is a channel and a medium for me," he says. "I see John Coltrane as an angel. Elvin Jones called him an angel. And my feeling is that if anybody would know, Elvin Jones would know. For us, he's more than a saint."

Every week, visitors from all kinds of backgrounds and around the world come to worship services, which include a monthly guided meditation through A Love Supreme and weekly Masses that feature mid-service jazz jams.

Today, the Coltrane church is called the St. John Will-I-Am Coltrane African Orthodox Church. It holds its services at St. Cyprian's Episcopal Church in San Francisco's Western Addition neighborhood — after years of moving from storefront to storefront, pushed out repeatedly by gentrification.

Rev. Stephens, who serves as the church's pastor, says their financial struggles mirror those of Black San Francisco.

"It's a lonely feeling because the people that you used to know for the most part are not here. They're just gone, they can't afford to live here. I don't even know how I'm still here, honestly," she says ruefully.

Even facing those constant challenges, the Church of St. John Coltrane soldiers on, five decades after its founding — continuing to share its beliefs and spread the message of that love supreme to all who will listen.