Accessibility links
Lukashenko Secretly Inaugurated Weeks After Disputed Election In Belarus Alexander Lukashenko declared a landslide victory in Aug. 9 polls widely seen as fraudulent. He was sworn in for a sixth term Wednesday in a secret ceremony in the capital, according to state media. 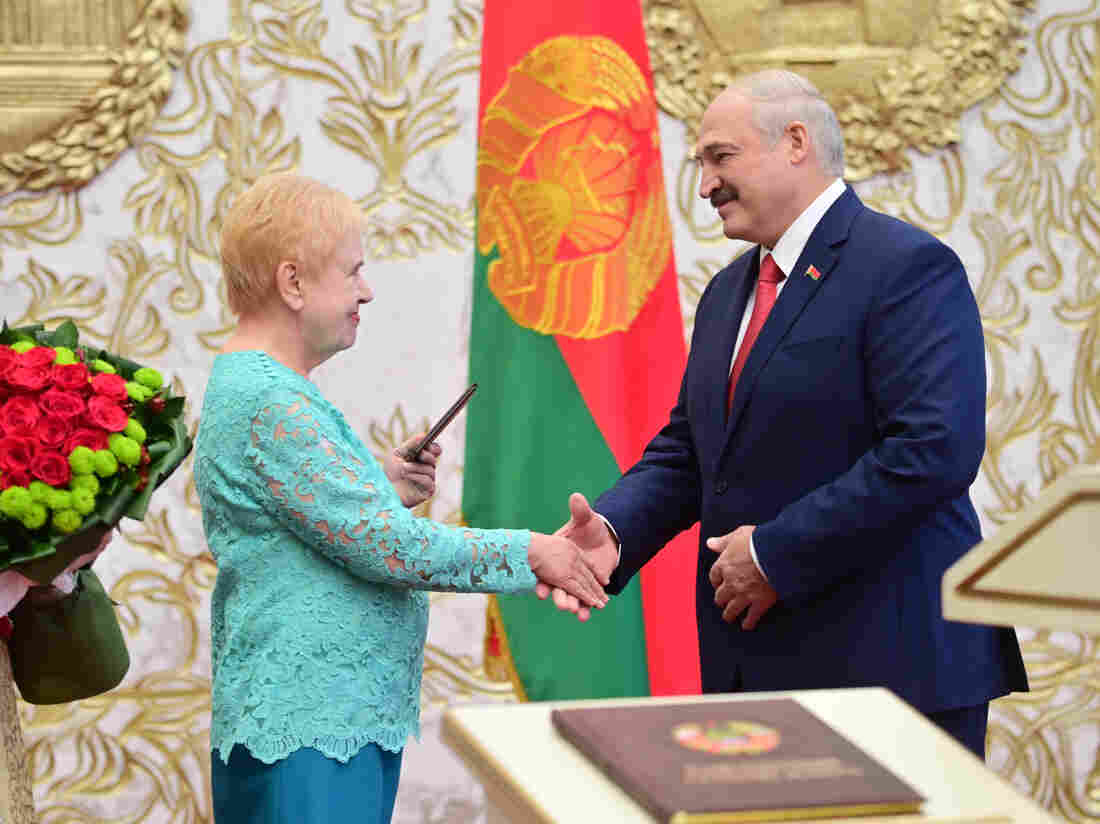 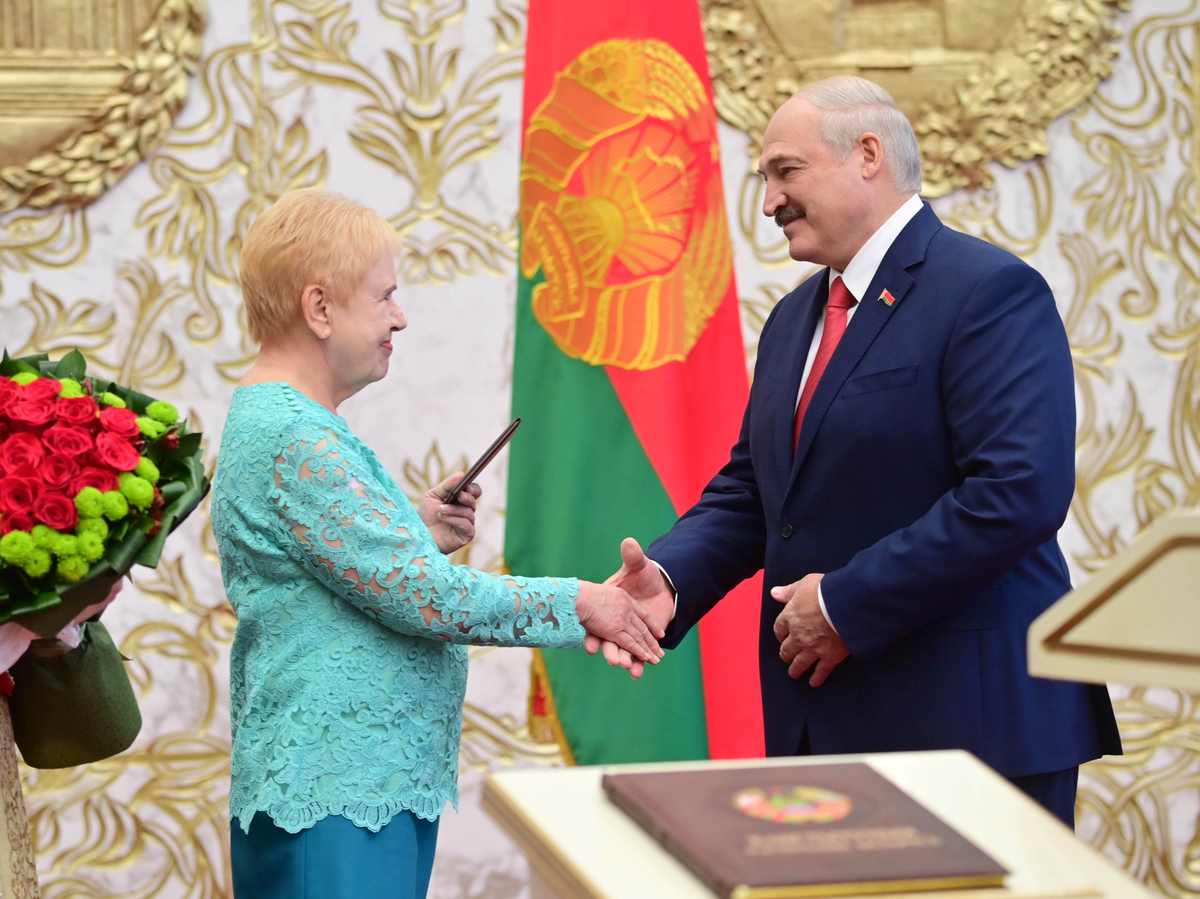 Lidia Yermoshina (left), chairperson of the Belarusian Central Election Commission, hands over a presidential ID to President Alexander Lukashenko during an inauguration ceremony Wednesday at Independence Palace in Minsk.

In a secret ceremony, Belarusian President Alexander Lukashenko was sworn in for a sixth term Wednesday in the capital amid nationwide protests and international outrage over his August reelection in a vote widely viewed as fraudulent.

State media announced that Lukashenko, who has held on to power for more than a quarter-century, took the oath of office during a ceremony at Independence Palace in Minsk that was attended by several hundred government officials.

Presidential inaugurations in Belarus, seen as major state occasions, are normally announced in advance. But critics say the covert ceremony was aimed at avoiding the embarrassment of mass demonstrations that have plagued the government since the disputed Aug. 9 presidential election in which Lukashenko claimed to have won 80% of the vote.

His main opponent, Svetlana Tikhanovskaya, a 38-year-old political novice, was forced to flee for her safety to neighboring Lithuania, a member of NATO, after the election results were announced.

"I am the only leader who was elected by the Belarusian people. And our job now is to build a new Belarus together," she declared in an emailed statement that also stated she had "returned" from a visit to Brussels, where she met with European Union foreign ministers on Monday.

The August vote, which the U.S. and its European allies have said was neither free nor fair, risks elevating an already isolated Belarus to the level of pariah state, with Russia as Lukashenko's main supporter.

Amid Democratic Street Uprising, Belarusian Strongman Gets Support From Russia

Shortly after the election, U.S. Secretary of State Mike Pompeo called out the election as fraudulent.

"Severe restrictions on ballot access for candidates, prohibition of local independent observers at polling stations, intimidation tactics employed against opposition candidates, and the detentions of peaceful protesters and journalists marred the process," Pompeo said in a statement.

The U.S. also recently signed on to a joint statement condemning Belarus' crackdown on Internet freedoms in the wake of the disputed election.

Meanwhile, the European Union's top diplomat, Josep Borrell, said in a statement last week that the bloc does not recognize Lukashenko as the legitimate president of Belarus.

"The situation is clear for us. We consider the elections of Aug. 9 fraudulent," Borrell told the EU Parliament.

A Kremlin spokesman told reporters on Wednesday that Vladimir Putin wasn't aware of the inauguration and that he didn't know whether the Russian president would congratulate Lukashenko. The spokesman said Putin has no plans to visit Minsk.

However, hundreds of Russian airborne troops parachuted into Belarus on Wednesday as part of joint military exercises dubbed "Slavic Brotherhood," according to Russia's defense ministry. The drills are interpreted by some as a show of support for Lukashenko.

The maneuvers come as Russia has denied plans to open a military base in Belarus, a prospect that has alarmed neighbor and NATO-member Latvia.

"Russia is strengthening and modernizing its military capacity close to the Latvian border and Belarus is also involved in these activities," Latvian Defense Minister and Deputy Prime Minister Artis Pabriks said in a statement Tuesday that was reported by Bloomberg.

Pabriks added that such drills, in which "aggressive scenarios against the Baltic states are played out, do not promote mutual trust and good neighborly relations."