Accessibility links
How Dua Lipa's Day-Glo Nostalgia Found A Home (Maybe Yours) In Dark Times A pair of euphoric projects have helped to make the singer a ray of light for pop fans longing for the dance floor in a year filled with calamity. Dua Lipa released her second album, the glossy, pristine Future Nostalgia, in March, just weeks after COVID-19 locked the world into quarantine. The sure-footedness of her dance floor-inspired pop gained ironic resonance in the uncertainty of the moment that followed. Hugo Comte/Courtesy of the artist hide caption 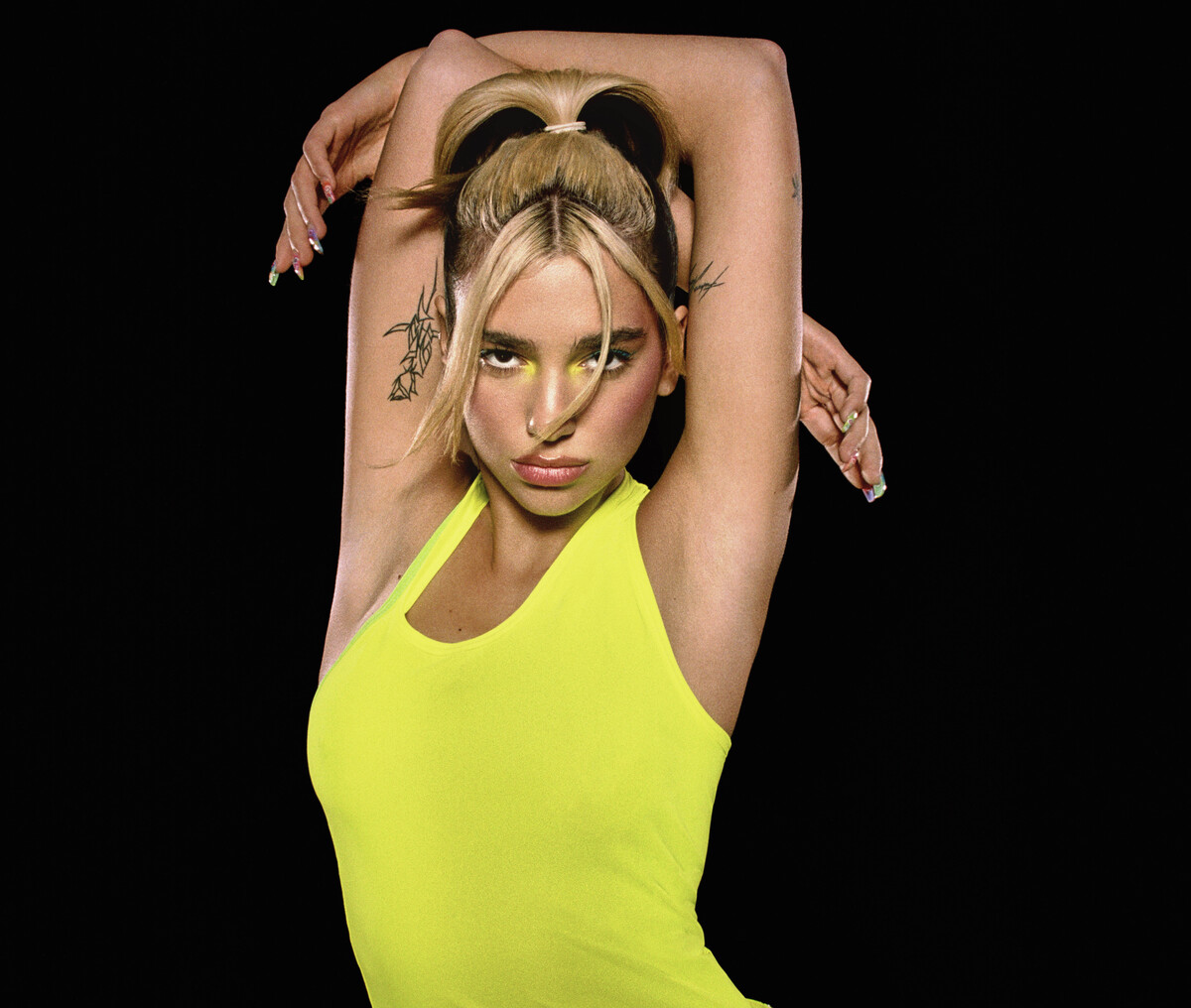 Dua Lipa released her second album, the glossy, pristine Future Nostalgia, in March, just weeks after COVID-19 locked the world into quarantine. The sure-footedness of her dance floor-inspired pop gained ironic resonance in the uncertainty of the moment that followed.

My hazy memories of childhood in the 1980s are a jumble of contrasts. On one hand, there's the grim, gray dread of existential threats: nuclear brinkmanship, acid rain, mounting AIDS infections and trickle-down economics. But Day-Glo '80s pop culture — everything from fluorescent shoelaces to loose-jointed breakdancing to Prince albums and wacky films like Berry Gordy's The Last Dragon — offered me escapist relief from the encroachment of peril. Annus horribilis 2020 is just as full of contrasts. There's the catastrophic body count of the COVID-19 pandemic, the enduring terrors of police brutality and the daily onslaught of authoritarian shenanigans. In what seems like ironic counterpoint to the world falling apart, pop phenom Dua Lipa delivered two euphoric, superbly-executed projects in 2020: March's studio album Future Nostalgia and August's remix album Club Future Nostalgia.

While pop stars like Lady Gaga, Alicia Keys and Haim delayed album releases due to the pandemic, British-born Dua Lipa chose to buck hesitancy (and the sophomore slump, too). Buoyed by a well-funded record label push that afforded her a non-stop virtual promotional cycle, Lipa became the first major pop star to release an album in quarantine. Future Nostalgia broke several Spotify streaming records upon its initial release. She'd ultimately deliver five blazing singles, each with its own creative music video. In a year of calamity, Dua Lipa's ecstatic dance floor pop triumph felt hopeful, like a neon flare shot high into the night sky.

I interviewed Dua Lipa early in her career, in 2016, for NPR Music's web series Noteworthy. That was one of her first, if not her first, U.S. media interviews. Since then, I've followed Lipa's creative journey closely and I've been intrigued by her current streak of fortuitous timing. So I requested an interview with her for the closing keynote session of this year's virtual Pop Conference, in conjunction with NPR Music and the Museum of Pop Culture. In our freewheeling conversation, I asked her a range of questions touching on themes of nostalgia, youth, activism and more.

Future Nostalgia was made prior to the pandemic, and it was never designed to speak to issues of isolation or quarantine. But the album gained new, unexpected significance, if only by virtue of context. Dua Lipa's assured, high-end comfort dance-pop — just the sort that Donna Summer, Madonna and Janet helped pioneer — met social instability and uncertainty head-on. Rippling with low-end bass lines, crackling percussion and glossy software synths, Future Nostalgia sounds pristinely recorded, mixed and mastered — as airy and spotless as a Dubai shopping mail. Because ultra-melodic, tightly-arranged earworms like "Hallucinate" and "Levitate" seem effortlessly manicured, it's easy to overlook how much thoughtful, architectural construction has gone into them. Lipa co-wrote all the songs on the album, and they're all substantial vehicles for her sultry, unpretentious alto voice.

Lipa's dance-pop is comforting in its warm nostalgia and convivial familiarity. True to its oxymoronic title, Future Nostalgia features state-of-the-art production techniques (the album's phalanx of producers includes Jeff Bhasker and Ian Kirkpatrick) while hopscotching an array of past eras, genres and styles. There's the blinding disco '70s of lead single "Don't Start Now," and the '80s arpeggiated jazzercise of "Physical." "Love Again" features the Al Bowlly trumpet line sampled in White Town's "Your Woman" (composed by Indian-born British Marxist Jyoti Mishra) – '30s jazz revived via late-'90s alt-pop, reborn in 2020. The Club Future Nostalgia remix album, spearheaded by Lipa and DJ The Blessed Madonna, takes the Cuisinart approach to the past to maximalist extremes: In addition to Neneh Cherry, Jamiroquai and Stevie Nicks samples, Madonna, Missy Elliott, Masters at Work and Gwen Stefani all deliver cameos. Dua Lipa's comfort music is more than kitchen sink nostalgia. It's like a shuffled Spotify playlist of all your favorite pop from the past, the album-as-algorithm that knows your musical tastes better than you know your own.

Future Nostalgia feels like a cultural force in 2020, partly because Dua Lipa's giddy embrace of camp style matters — artifice and exaggeration feel like solace in hard times. There's the anime-inspired, over-the-top music video for "Physical," and the album's daffy lyrics reference architect John Lautner and serve up words and phrases like "renegading," "pocketful of honey," "sugarboo" and "diamond-rich." While some quarantine music seeks to comfort by being nourishing and nutrient-rich as chicken soup, Dua Lipa's version of campy comfort pop is like the head rush of a high-fructose corn syrup binge. Crafted for a universal market while super-serving gays everywhere, Future Nostalgia boasts sassy, finger-snapping lyrics like "You want the recipe, but can't handle my sound" and spunky tunes like "Levitating" that capture the tumbling, careening feeling of falling in love.

Two studio albums in, Dua Lipa's music hasn't yet broached confessionalism or much serious lyrical content. But the outside world, and all the anxious dread it can conjure, stalks the music's edges. Album closer "Boys Will Be Boys" deploys mordant wit to address sexist double standards and the damage that patriarchy causes. This year, Dua Lipa, who is of Kosovar descent, faced down a social media firestorm after posting something that seemed to suggest her support of Albanian nationalism and expansionism. She's also a non-Black artist whose success is partly rooted in her ability to ride the charts with Black-inspired disco and house pop in an era of growing sensitivity around issues of cultural appropriation. Keeping the outside world at bay, however, is a metaphor for what many of us have been attempting to do in 2020: maintain our bubbles of self-protection and self-care.

Indeed, some of us this year have had to do what Lipa sings about in "Don't Start Now:" Do a "full 180" and mitigate varying kinds of heartbreak. Future Nostalgia and its accompanying remix album are limbic system pop, offering dance floor bliss we can use to imagine ourselves liberated from lockdown inertia and enclosure. More than just time-traveling nostalgia, Dua Lipa's music offers us a blueprint out of confinement, beaming us to a packed, sweaty dance floor that we're not allowed to dance on. In a year marked by the horror of ventilators and asphyxiation, when we all have to think more than ever about the politics of suffocation and who is and who is not permitted to breathe, Dua Lipa's joyous dance pop cannot by itself save the world. No pop music can. But it has felt restorative — like a fleeting gasp of fresh oxygen when some of us needed it the most.