Accessibility links
To Celebrate Halloween Safely, Americans Are Getting Creative The CDC is advising against the door-to-door candy quest during the pandemic. So parents are coming up with alternative ways to bring the spooky season to life. How about sending candy down a chute? 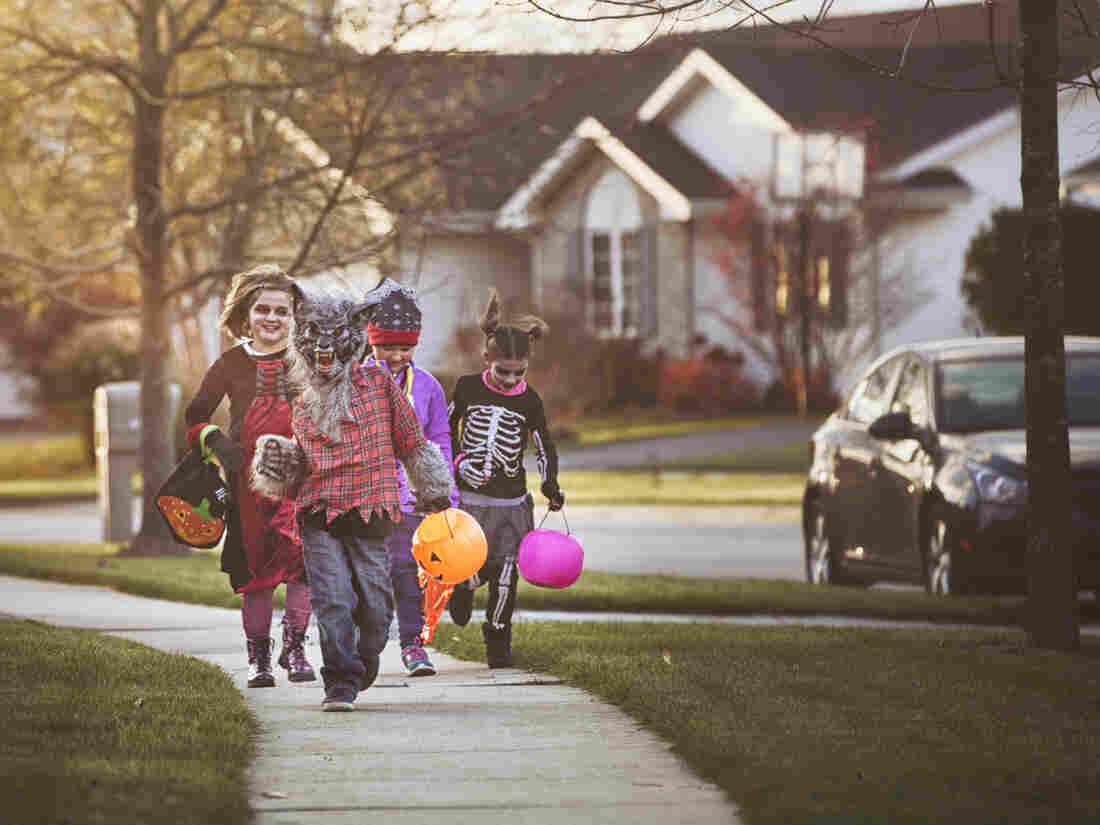 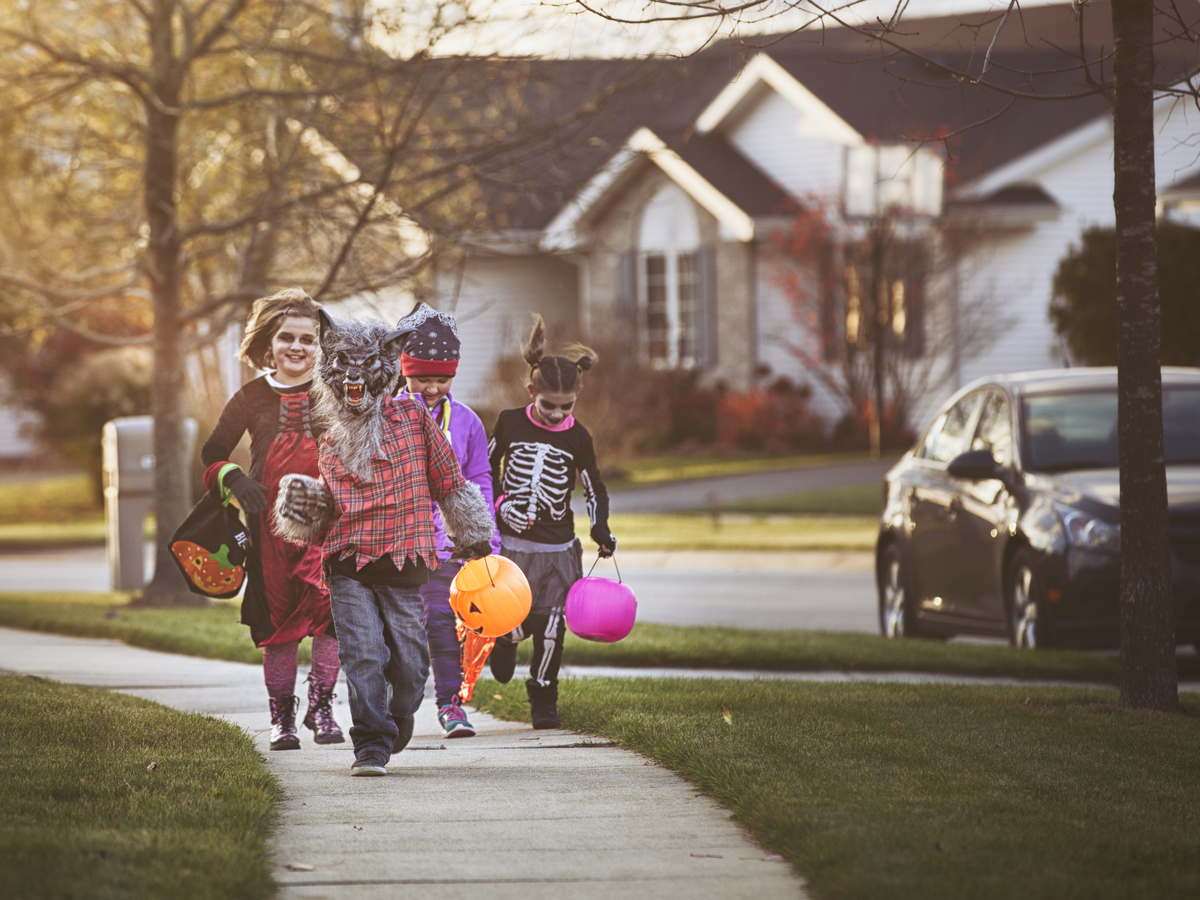 Halloween is one more thing being upended by the pandemic. Federal guidelines advise against traditional trick or treating, but parents across the country are trying to make the holiday special for their children anyway.

Traditional door-to-door trick or treating should be avoided this Halloween, under new national guidelines. But even with the Centers for Disease Control and Prevention's latest advice, Americans are still rallying to safely bring the spooky season to life. People are discovering new, creative ways to celebrate the occasion during the pandemic.

"I think we're all just looking for some type of normal in 2020, and safely celebrating Halloween will make something this year feel right and in our control," says Nevada resident Brittany Dutra, founder of a blog called 100 Percent That Mom.

Dutra says she has been a little extravagant and will be going all-out for the holiday. "We let my daughter pick out three different costumes just to make up for all the chaos this year," she says.

Dutra plans on having an intimate get-together with her family, who have been stuck at home together, and possibly going trick or treating. She won't be passing out candy, but instead will leave it out on the porch in clear plastic bags 6 feet apart.

"There's usually a block of houses that does haunted houses, but that will not be done this year because of coronavirus," Dutra says. Indeed, the CDC guidelines say indoor haunted houses are considered high risk and should be avoided.

Over 148 million U.S. adults intend to take part in Halloween-related activities this year, according to an annual survey by the National Retail Federation. That's down from the 172 million in the 2019 survey. And those planning to celebrate by trick or treating this year dropped to 23% from 29% in 2019.

While some parents are preparing safe trick-or-treating routes for their children, others are conflicted on whether they should let them go at all.

Lisa Rampton Halverson, a working mother of two from Utah, says Halloween is a huge thing in her neighborhood, but this year, she's uncertain how it will play out.

"I'm not so worried about kids walking around outside with masks on, but the question is handing out and collecting the candy," she says. The CDC recommends lining up individually wrapped goody bags for families to grab and go at the end of the driveway or at the yard's edge while maintaining a social distance.

Halverson says her daughter has had her Tauriel costume, from The Hobbit film series, figured out for months, and she doesn't want to ruin her excitement. "Our county has a rising amount of cases. I hope that our little corner is more protected, but I already know of cases among neighbors and friends," Halverson says.

She has been comparing notes with other parents. "Some of the ideas I've heard are: setting up a chute made of long cardboard tubes or plastic piping, then sending candy down the tubes," Halverson says. "Maybe having a small group of friends over for a scavenger hunt with candy in the backyard or possibly a clothesline in the yard with candy attached. "

But even if she comes up with a fun, cute, safe idea, Halverson isn't certain her neighbors would do the same. A neighborhood moms email list shows there are plenty of differing views of the pandemic, Halverson says.

"So, do I expect my kids to trick or treat in disposable gloves? Do I make them wait 72 hours so any germs are likely gone from the wrappers?" she says. "The carefree nature of the night seems shot just thinking about this."

Communities across the country have been struggling with their own guidelines for Halloween.

In Los Angeles, the county health department initially banned trick or treating, but then said it wasn't recommended. The department did cancel all Halloween carnivals and haunted houses in the county.

New York's Greenwich Village Halloween Parade was canceled. It usually has about 50,000 marchers and an even bigger crowd.

This Halloween season is causing shifts not only for families and children, but also for businesses that sell all those costumes and candy.

Sellers have been optimistic about the upcoming season. The National Retail Federation projects $8 billion in Halloween spending, down from about $8.8 billion last year because of the expected dip in participation in holiday activities.

But Steven Silverstein, president and CEO of Spirit Halloween, a seasonal Halloween retailer, said, "We're seeing encouraging initial results and are anticipating a Halloween on par with last year."

Retailers are putting out seasonal merchandise earlier than normal, says Katie Thomas, a consumer trends analyst at the Kearney Consumer Institute. But it seems like consumers are more open to it this year. "It's been a long, hot summer. Everyone's been cooped up in the house, so people are looking for something to celebrate," she says.

Those who make Halloween sweets are adjusting too.

Phil Stanley, global sales chief at Hershey, told CNN Business the company will cut back on Halloween packaging and focus more on candy that's consumed in homes rather than passed out. Mars is preparing for more online candy sales this season and using more digital marketing. During last year's Halloween season, candy sales totaled about $4.6 billion, according to the National Confectioners Association. Chocolate and candy sales are already up 13% compared with last year.

"The CDC's guidance reinforces that Halloween is happening and provides inspiration for creative and safe approaches to celebrating the holiday throughout the month of October," says John Downs, the confectioners association's president and CEO.

Andy Mantis, head of data insights at 1010data, projects sales similar to last year's, since retailers are off to a good start. Mantis expects an increase in sales of Halloween masks and even holiday-themed hand sanitizers.

"The CDC guidance fits well with trends that we have already seen during COVID, such as significant growth of family and do-it-yourself craft projects," he says.

Halloween is one of busiest times of the year for the Party City chain. In the past couple of weeks, customers shopping on the company's website have been more interested in decorations than costumes. "Costumes started to pick back up last week, but it is still lower than last year," says Julie Roehm, Party City's chief marketing and experience officer.

There's also been a shift in the types of costumes being sold this year.

There's been a jump in everyday heroes costumes, for instance: nurses, doctors and firefighters, Roehm says. "With costumes, we usually get to lean on blockbuster films, but since we didn't really have any this year, I think people are turning to the people who helped during the pandemic every day," she says.

Another trend Party City has seen take off is "ghosting." A friend puts together a Halloween-themed goody bag, then drops it off at the front of the friend's porch.

Like many others, Halverson, the Utah resident, is disappointed that this year's holiday just won't be the same.

"Halloween is a holiday that brings the neighborhood together. I don't agree with so-and-so's politics, but on Halloween night they greet my kids with warmth and candy and tell them how fantastic their costumes are," she says. "Will we miss out on that small way to bond across lines that often divide us? That makes me sad."