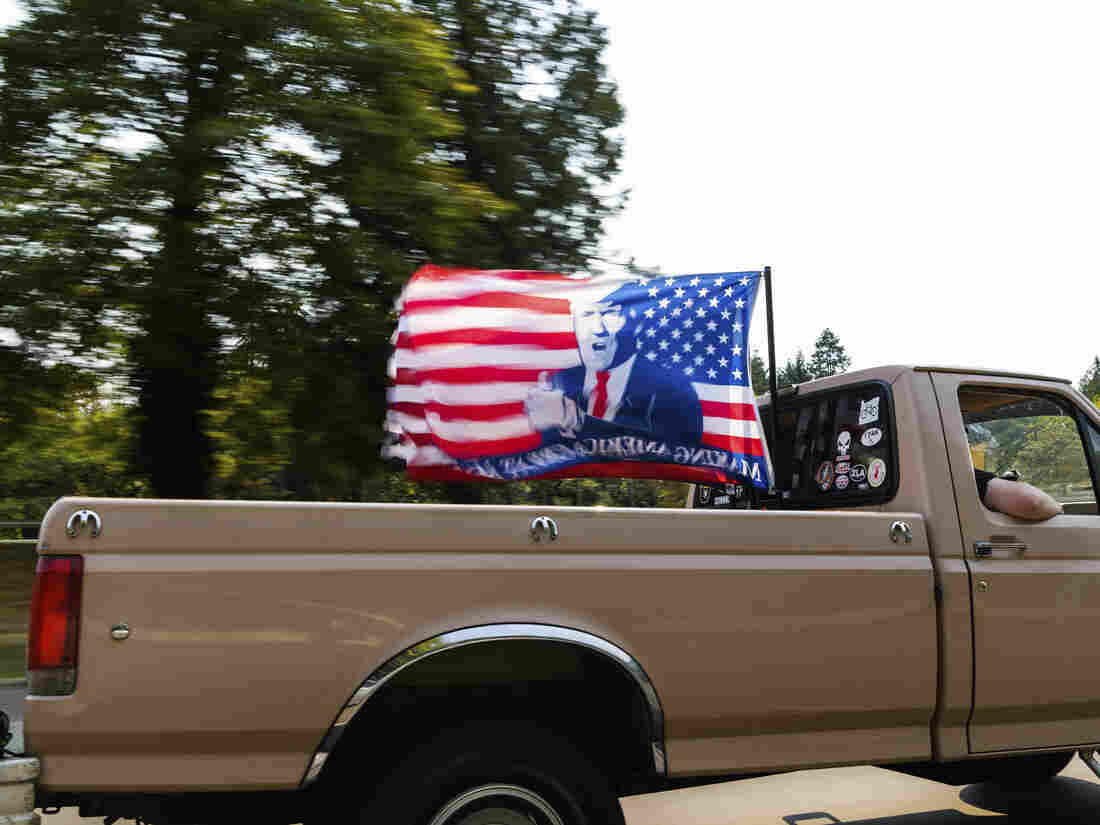 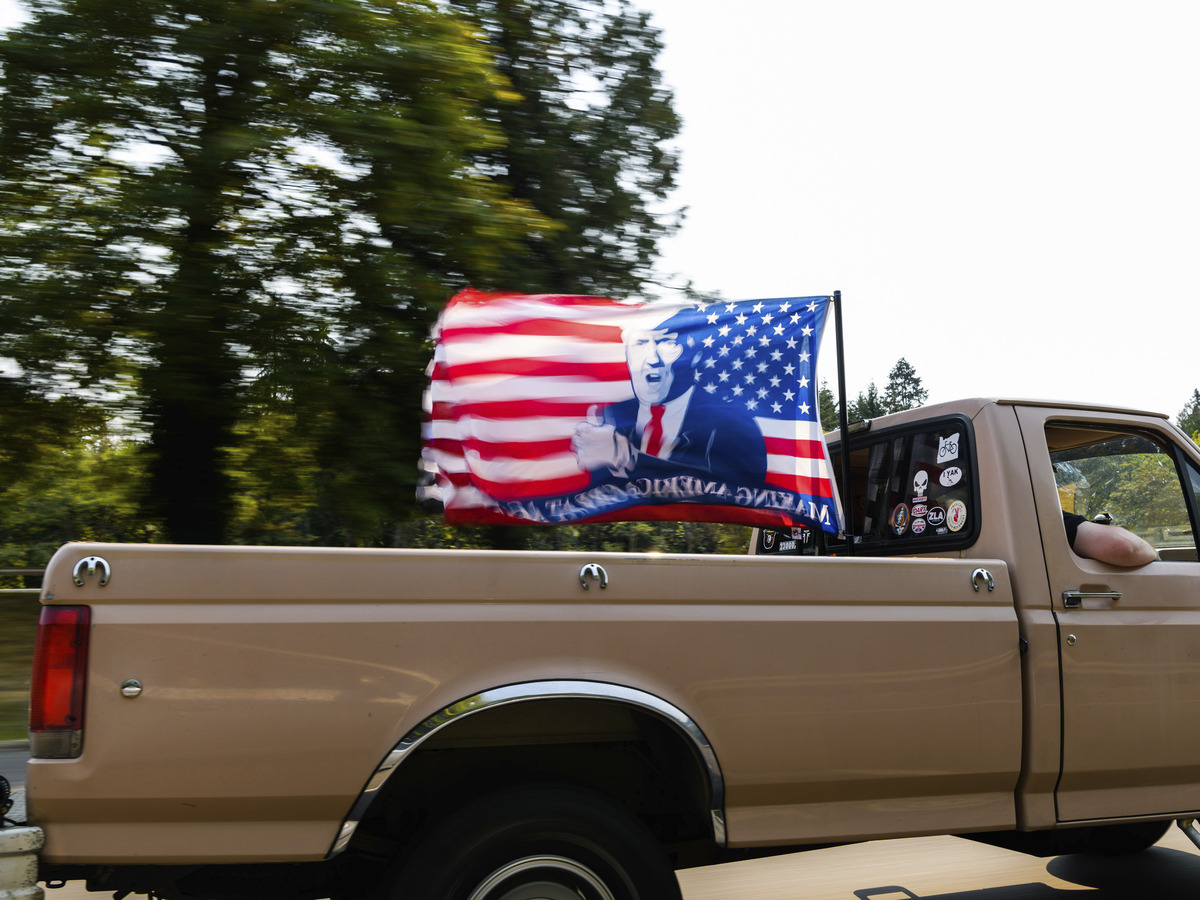 Vehicles make their way along Interstate 205 South during the "Oregon for Trump 2020 Labor Day Cruise Rally" earlier this month at Clackamas Community College in Oregon City.

In the age of social distancing, car and truck caravans of MAGA flag-waving supporters of President Trump have hit the road from New York to California.

"We stretched for a very long distance; I mean miles back," said Shawn Farash, who organized a caravan of hundreds of motorcycles, cars and trucks that drove through the streets of Long Island last weekend.

Farash describes himself as a "regular guy" who works in advertising, not politics, and says even he was surprised by the turnout. In his best Trump impression, he deadpans: "You don't have to trust the polls. Just look at the people who are showing up every weekend. The silent majority, silent no more."

1500+ cars on Long Island in support of @realDonaldTrump and our country yesterday. What a day. Thanks to all who made it out pic.twitter.com/DmXKrZXHvS

The caravans are promoted on social media, and in some cases, organized by people who have never before been politically active. Just this past weekend, boisterous convoys, with horns honking and Trump flags flying, also rolled through Michigan and North Carolina.

These mobile rallies have continued, even after one turned deadly last month in Portland, Ore. A supporter of a far-right group was killed following clashes between participants in a pro-Trump caravan and counterprotesters. The suspect, who supported antifa, a militant leftist movement, was killed by authorities serving a warrant for his arrest.

Most of the events since then have been peaceful, though tensions have flared. In Elon, N.C., on Saturday, a pro-Trump caravan drove through town, hurling insults and white supremacist slogans at a lone counterprotester, who posted a video of the incident on Twitter.

While the caravans haven't drawn much national media attention, videos of some of them have been shared online by RT, the television network funded by the Kremlin. This comes as U.S. intelligence experts warn that Russia is again trying to influence the election in favor of Trump.

Car caravans emerged in the spring as part of protests against state lockdown rules to protect against the spread of the coronavirus. Those events were coordinated, in part, by pro-business lobbying groups in Washington, D.C.

Organizers of the latest caravans say these are grassroots efforts aimed at showing the country is united — not divided by racism or violence. They say they deliberately try to avoid clashes with counterprotesters.

"We don't condone any racism, racist comments," said Keith Lee, a convoy organizer from Texas. "We don't want people dragging a Black Lives Matter flag or an antifa flag underneath their truck. If we see any of that stuff, they're out of there."

Lee is one of the organizers of MAGA Drag the Interstate, a group that's helping to coordinate caravans on major highways around big cities. So far, he says they've held events in 46 states, and they're planning to host caravans nationwide during the first weekend in October.

"This is about making America patriotic again," Lee said.

But counterprotesters said some events have stoked hate. Megan Squire, who studies far-right extremist groups at Elon University, where she's a professor of computer science, was the one who filmed the North Carolina caravan.

"I was literally standing on that corner silent, listening, and I heard exactly what they had to say, and it was hate," Squire said. "He even, like, cupped his hands to make sure, and he enunciated. And I remember thinking that at the time, I was like, 'Wow, you really wanted me to hear that.' Creepy, really."

The caravan was organized by a local activist who's well-known for defending Confederate monuments. He did not respond to a request for comment.

Other caravans have gone off without incident.

Christina Medema, a stay-at-home mom, helped organize the Grand Rapids caravan. She also said she'd never done anything political until now but was motivated in part by the relentless stream of "negative" stories in the news.

"It surprised me just because I'm a little Rockford housewife," Medema said. "Not a ton of people know me, so it shocked me to see all of those people coming, all of those cars coming."

Video from the Michigan event taken by RT features clips of participants talking about the "silent majority" against "radicals" who don't like America and "BLM garbage."

Experts say RT is a Russian propaganda machine that tries to highlight divisions in U.S. society, but Medema doesn't see it that way. She said American media just won't cover this story and only focus on caravans when something goes wrong.

"I was actually really thankful that he was there. He pretty much posted everything that we did, showing it all, not splicing it or editing in a weird way," Medema said of the RT producer. "It made me a little bit disappointed in our local news outlets for sure."

Medema said she believes turnout at her caravan is an indicator that Trump will win Michigan — and the election — even though polls show former Vice President Joe Biden in the lead.

"I would be pretty shocked if he didn't, to be honest," she said of a possible Trump win. "Every car that passed us, it felt like honked and gave us a thumbs-up."