Accessibility links
Alexei Navalny's Accounts Reportedly Frozen While In Berlin Hospital After Poisoning A spokeswoman says the Russian opposition leader's bank accounts were frozen and his Moscow apartment "seized" in connection with a libel suit while he was in a coma after poisoning by a nerve agent. 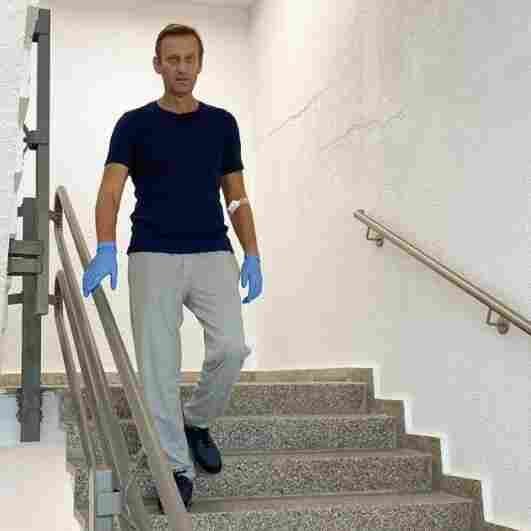 Russian opposition leader Alexei Navalny, who is still recovering from nerve agent poisoning widely seen as the work of Kremlin agents, has had his bank accounts frozen and his apartment "seized" in a civil case, according to his spokesperson.

Navalny was released from Berlin's Charité hospital on Wednesday after undergoing more than a month of treatment. He had his assets seized on Aug. 27 as he lie in a coma, said the opposition leader's spokeswoman, Kira Yarmysh.

The seizure came in connection with a long-running libel case filed.

Along with his bank accounts, authorities placed what amounts to a lien on his Moscow apartment that prevents it from being sold, donated or mortgaged, Yarmysh said.

Navalny fell violently ill on Aug. 20 aboard a plane heading to Moscow. The plane made an emergency landing in Omsk, where he was hospitalized in critical condition. After days of wrangling to get permission from Russian authorities, Navalny was transferred to the hospital in Berlin, where he was placed in a medically induced coma.

Later, a German military lab uncovered traces of the Cold War-era nerve agent Novichok in Navalny's system. Novichok is the same substance that was used to poison Russian defector Sergei Skripal and his daughter in the U.K. in 2018 – an attack that British authorities say was carried out by two Russian agents. Both survived the attack.

The Kremlin has denied poisoning either the Skripals or Navalny, but Western intelligence has said it would be nearly impossible for a non-state actor to acquire Novichok for such an attack.

The reported seizure of Navalny's apartment and assets comes in connection with a $1.1 million court ruling in favor of Yevgeny Prigozhin, the owner of a catering company who has earned the nickname "Putin's chef" for his close ties to Russian President Vladimir Putin. Prigozhin was indicted by the United States for running a troll factory known as the Internet Research Agency that attempted to influence the 2016 presidential election.

Last year, Prigozhin won a judgment against Navalny and his Anti-Corruption Foundation for libeling his catering company, which provides school lunches. The opposition leader blamed Prigozhin's company for an outbreak of dysentery among Moscow schoolchildren.

"As a result, they seized the assets and the apartment of a person who was in a coma," Yarmysh said.

Navalny's supporters say the libel lawsuit and the poisoning are part of a larger campaign to cripple the activities of the anti-Putin campaigner.

The opposition leader spent 32 days undergoing treatment at Charité hospital, 24 of them in intensive care. Upon his release, doctors said that based on his condition they expect him to make a full recovery.

In his final days in the hospital, Navalny posted regular updates and photos to Instagram of his progress toward recovery.

Just hours before his release, he responded from his hospital bed Tuesday night to a report that Putin had suggested to French President Emmanuel Macron that Navalny "could have taken the poison himself."

"Good theory, I believe it deserves the most careful attention," Navalny wrote in Russian. "Cooked Novichok in the kitchen. Took a sip from a flask on the plane. Fell into a coma."

Putin's spokesman, Dmitry Peskov, said Wednesday that the report about a conversation between the two world leaders was "inaccurate in its reported wording."