Accessibility links
California Gov. Newsom Calls Transition To Electric Cars An 'Economic Imperative' "This is where the automobile manufacturers are going," Newsom tells NPR a day after ordering a 2035 ban gasoline cars. "We want to accelerate a trend you're seeing all around the rest of the world." 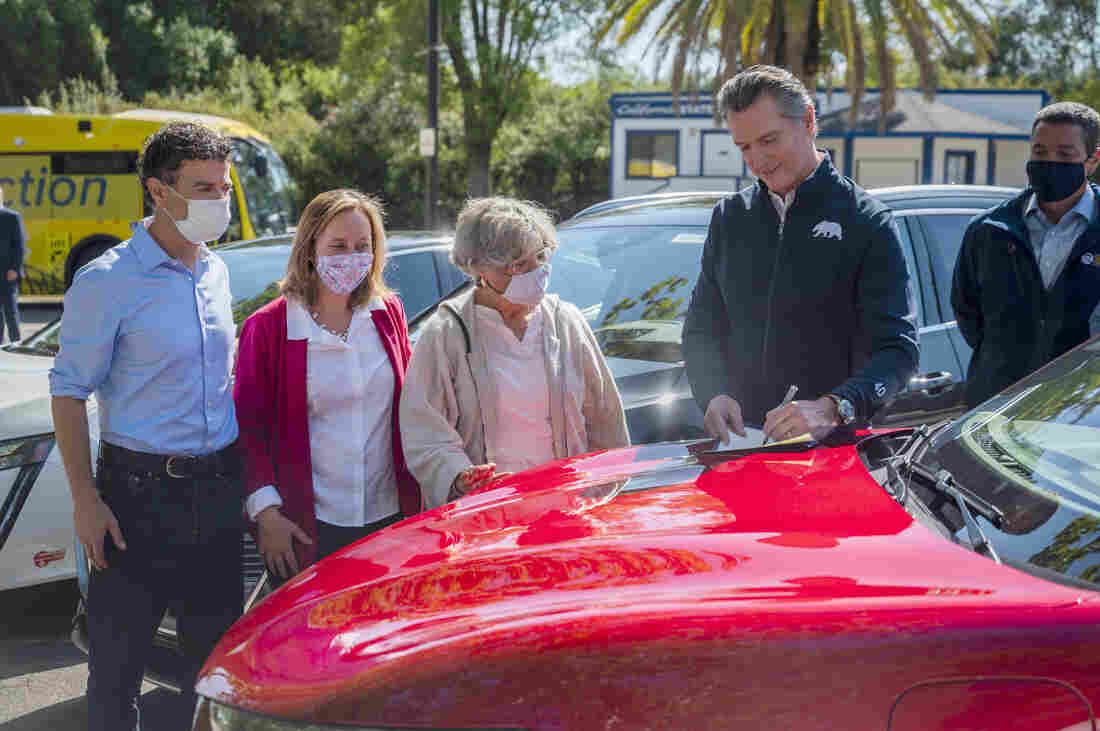 On the hood of an electric car in Sacramento on Wednesday, California Gov. Gavin Newsom signed an executive order requiring all new passenger vehicles sold in the state to be zero-emission by 2035. Daniel Kim/AP hide caption 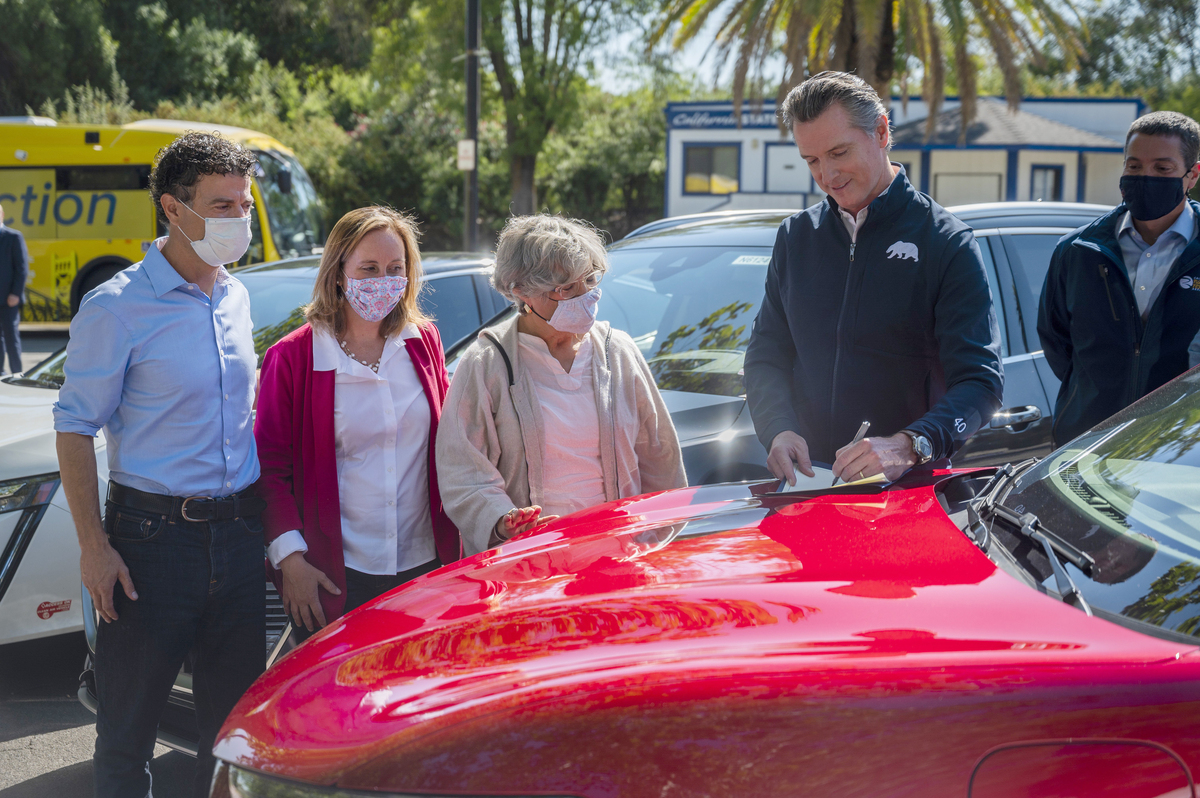 On the hood of an electric car in Sacramento on Wednesday, California Gov. Gavin Newsom signed an executive order requiring all new passenger vehicles sold in the state to be zero-emission by 2035.

The predicted effects of a warming climate are increasingly visible in California: Five of the six largest wildfires in state history ignited in recent weeks, and the state clocked its hottest August on record.

In an effort to combat climate change, California Gov. Gavin Newsom already has set the goal of 100% zero-emission energy sources for the state's electricity by 2045.

The latest step in the state's plan to reduce greenhouse gas emissions came Wednesday, when Newsom pledged to ban all sales of new gasoline-powered vehicles by 2035. The executive order wouldn't prevent Californians from owning or selling gasoline or diesel-powered vehicles on the used-vehicle market.

California would be the first state in the country with such a ban, joining at least 15 countries, including France and Germany, that have made similar pledges to phase out gas-powered cars.

Responding to Newsom's executive order this week, White House spokesman Judd Deere called the move another example of "how extreme the left has become," concluding that "the lengths to which they will go to destroy jobs and raise costs on the consumer is alarming."

In an interview with All Things Considered, Newsom bats down the Trump administration's argument as "stale" and inaccurate.

"This is where the automobile manufacturers are going," Newsom says. "We want to accelerate a trend you're seeing all around the rest of the world."

On how realistic the 2035 plan is for California's infrastructure

We can do it. I mean, the reality is we're already doing it. Thirty-four percent of our electricity comes from renewable places. We have over 50% of all the electricity produced and procured in California from non-carbon sources. We have a plan. We have a strategy.

We went through an historic heat wave that was really a heat dome on the entire West Coast of the United States. We are reliant on imports from other Western states, and that's what impacted us for those two days where we had rolling blackouts.

But we believe our strategies moving forward will mitigate that. And that primarily will be advanced through battery storage technology, which is really taking shape, which for us is going to be the game changer, and we think for this nation, as it relates to our transition to renewable power.

With Blackouts, California's Electric Car Owners Are Finding New Ways To Charge Up

We make it worse by maintaining a status quo — by just going about our business as usual. I mean, what we're trying to do is accelerate investment, accelerate innovation, research, development, accelerate manufacturing. And as a consequence, we think that will substantially create a price competitiveness that will bring down the electric vehicle space. It's an economic imperative that we move in this direction to make the kind of investments that are necessary.

On the Trump administration's criticism for the plan.

It's gobbledygook. It's nonsense. It's not factual. It's not even an interesting argument. It's rather stale. Already, California has five times more green job than we do fossil fuel jobs. Fossil fuels are really the alternative energy. They want to go back to a 19th-century mindset where the American manufacturers are not even going to be competitive internationally in terms of where the rest of the world is going with electric vehicles and zero-emission vehicles. I'm almost, honestly, a bit embarrassed by those arguments because they fly in the face not only of the facts, but also where the car companies themselves want to go. I don't know who the Trump administration is doing bidding for, but they're really, really, almost troglodytes in terms of their approach to climate and to the economy and where we're going as a nation.

NPR's Noah Caldwell, Christopher Intagliata and Art Silverman produced and edited this interview for broadcast. Emma Bowman adapted it for the Web.