Accessibility links
Florida Republicans Target Efforts To Help Felons Vote The state attorney general is calling for an investigation into a $16 million contribution raised by billionaire Mike Bloomberg for a group working to get felons to the polls. 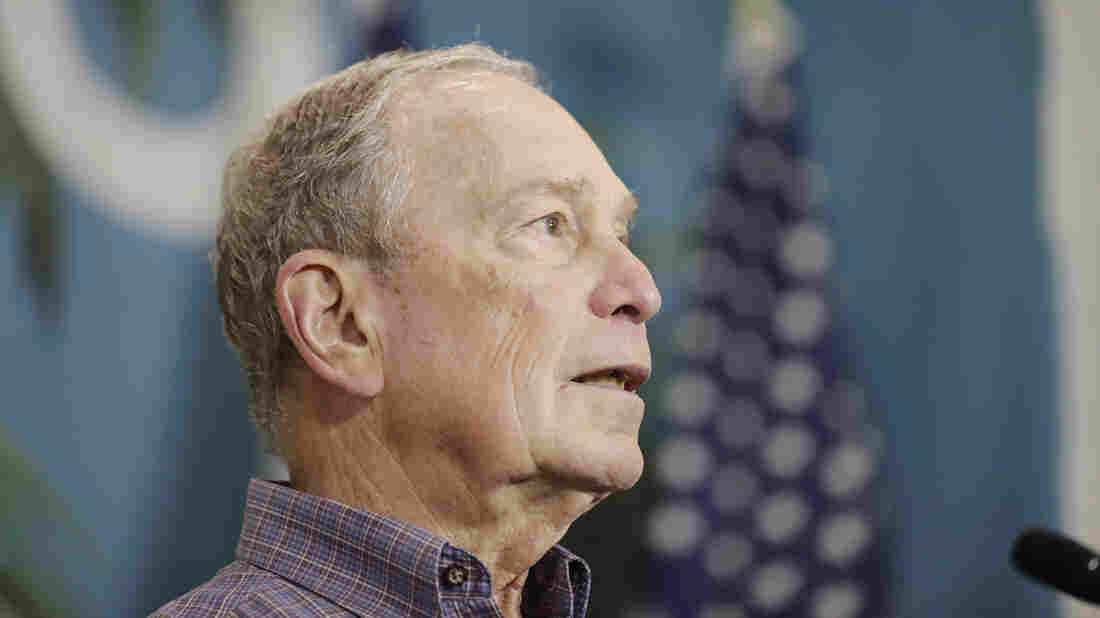 Mike Bloomberg, then a Democratic presidential candidate, speaks at a news conference in March in Miami's Little Havana neighborhood. Bloomberg has helped raise money to pay off felons' fines so they can vote in Florida. Brynn Anderson/AP hide caption 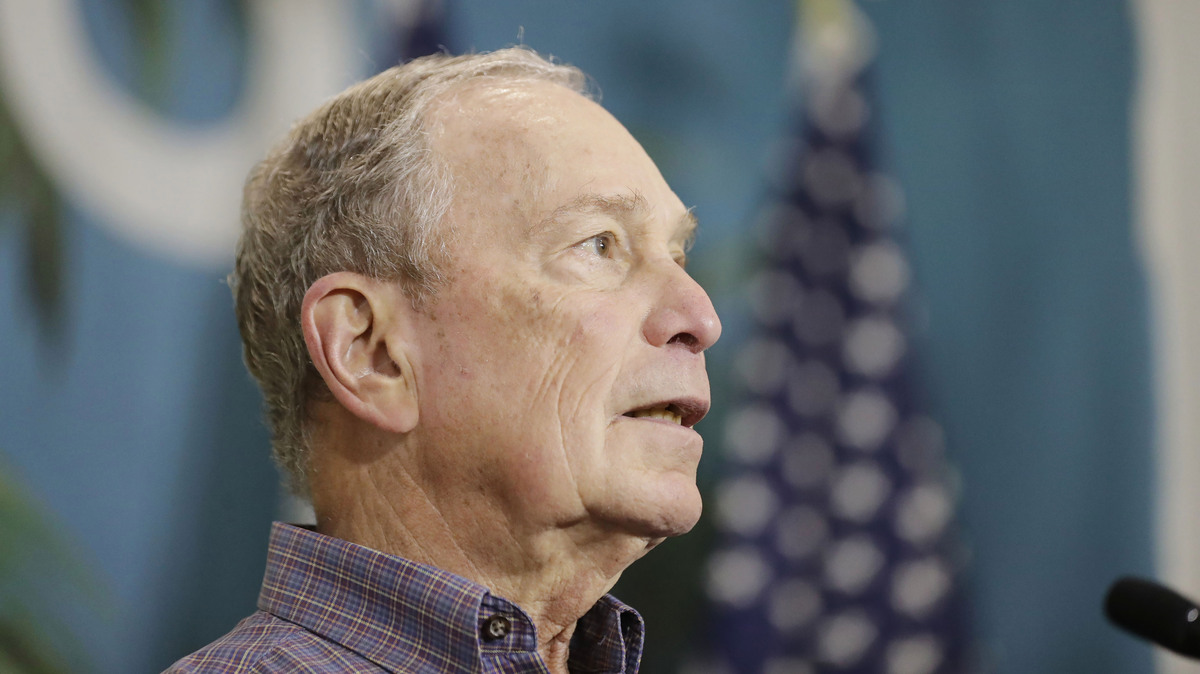 Mike Bloomberg, then a Democratic presidential candidate, speaks at a news conference in March in Miami's Little Havana neighborhood. Bloomberg has helped raise money to pay off felons' fines so they can vote in Florida.

Florida's attorney general is asking law enforcement agencies to open an investigation of a contribution made by billionaire and former New York City Mayor Mike Bloomberg to help pay the fines and court fees of felons.

Bloomberg this week raised some $16 million for a fund established by the Florida Rights Restoration Coalition to help felons who have completed their sentences vote in the upcoming election.

In 2018, the coalition put an initiative on the ballot in Florida that overturned a Reconstruction-era law that had prohibited most felons from ever regaining the right to vote.

But under a law passed by Florida's Republican-led Legislature and signed last year by the governor, felons can't register to vote until they've paid all fines and fees imposed as part of their sentences.

"We've helped over 4,000 people be able to satisfy their legal financial obligation. And what we've seen so far is an average of about $1,000 per person," Meade said.

This week Bloomberg, a former Democratic presidential candidate, signed on to the campaign and raised more than $16 million for the fund. That gets Meade's group close to the goal of $25 million it set to get fines paid so felons could register to vote by Florida's Oct. 5 deadline.

It's an effort that's been supported by celebrities, including John Legend and LeBron James. In a memo reported by the The Washington Post, the Bloomberg organization said it views donations to the fund as a "cost-effective way of adding votes to the Democratic column." 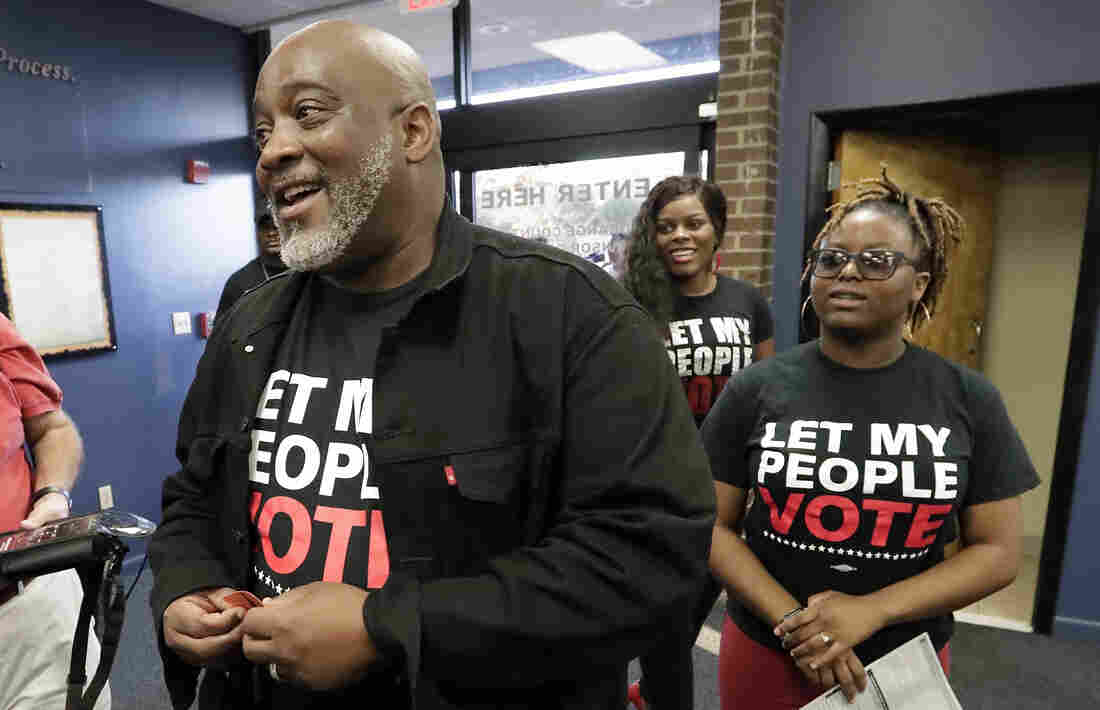 Desmond Meade, president of the Florida Rights Restoration Coalition, arrives with family members at the Supervisor of Elections Office in Orlando in January 2019 to register to vote. Meade's group works to restore voting rights to felons. John Raoux/AP hide caption 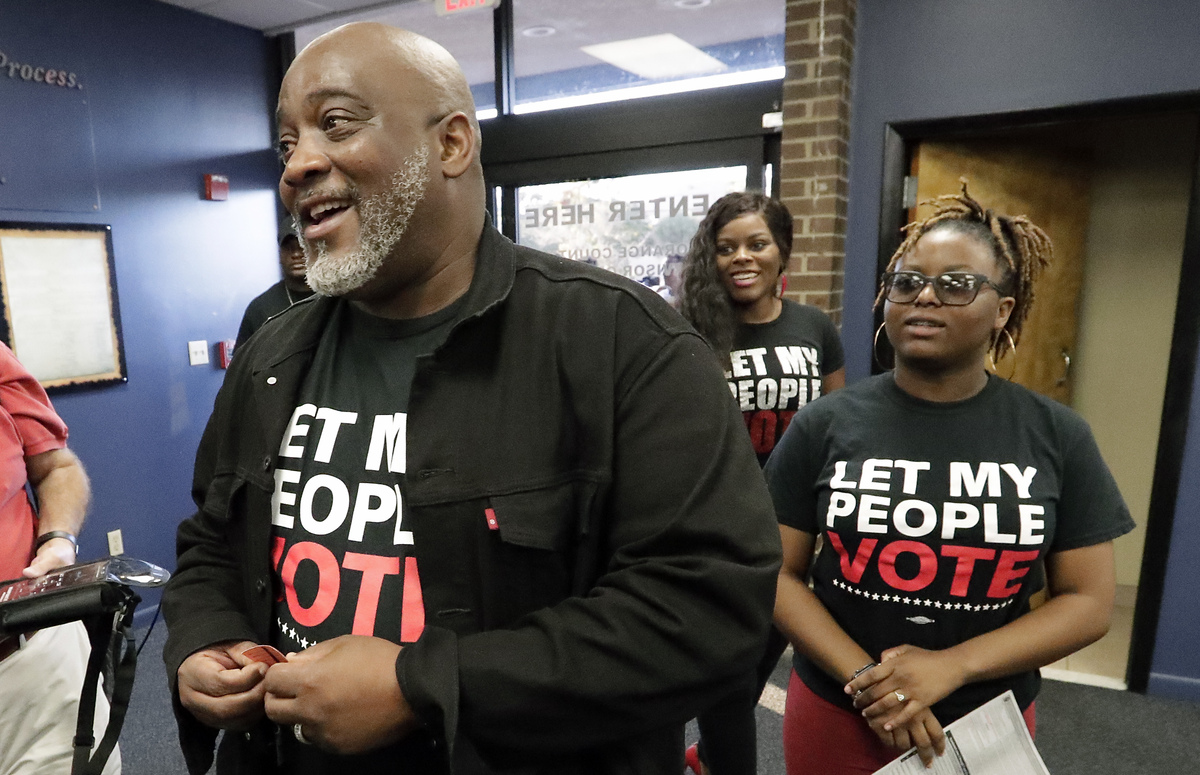 Desmond Meade, president of the Florida Rights Restoration Coalition, arrives with family members at the Supervisor of Elections Office in Orlando in January 2019 to register to vote. Meade's group works to restore voting rights to felons.

"It is a third-degree felony for someone to either directly or indirectly provide something of value to impact whether or not someone votes," Gaetz said.

Florida Attorney General Ashley Moody, a Republican, has now sent a letter to the FBI and the state Department of Law Enforcement asking them to investigate. A Bloomberg spokesperson call it a "transparent political ploy" that's "just the latest example of Republicans attempting to keep Floridians disenfranchised."

Florida's law requiring felons to pay fines before they can vote was recently upheld by a federal appeals court. Julie Ebenstein, an attorney with the American Civil Liberties Union's Voting Rights Project, said that in court part of the state's defense was that if felons don't have the funds, others could always pay for them.

"I'm surprised to hear now that third parties who are generously willing to pay people's outstanding legal financial obligations, suddenly they're being accused of a crime for doing exactly what the state suggested was perfectly legitimate," Ebenstein said.

The ACLU and other groups involved in that case haven't yet decided whether to appeal to the U.S. Supreme Court.

Daniel Smith, a political science professor at the University of Florida, said his research indicates nearly 775,000 felons in Florida have outstanding fines preventing them from voting.

He applauded the efforts of Meade's group and Bloomberg's $16 million infusion into the fund to pay their outstanding costs. But he said paying off the legal financial debt for all who need it would cost at least $1 billion.

"And there's something fundamentally wrong," Smith said, "about having to benefit from the largesse of an individual to have your voting rights restored."

Smith said there's little evidence helping felons register helps Democrats more than Republicans. Although African Americans — who tend to vote Democratic — are disproportionately represented in the group, the majority of felons with unpaid legal financial obligations in Florida are white.

Meade said while others are focused on the election and politics, for him, something larger is at stake — helping people reclaim their place in society.

He talked about a father and son who were stunned that strangers were willing to pay their outstanding fines.

"They were able to call the clerk directly and the clerk was able to say, 'Yes, sir you have a zero balance.' And once they heard that, both father and son started crying," Meade recalled.

Because of his activism on restoring voting rights to felons, Meade is well-known in Florida and nationally. He was recognized last year as one of Time magazine's 100 most influential people. His work upended a system that permanently disenfranchised an estimated 1.5 million people in Florida.

Like tens of thousands of others, Meade paid his fines and legal fees and has voted. But this week, he was back before Florida's governor and other members of the state's clemency board, asking for his past criminal offenses to be pardoned.

He told the panel, "I fight so that everyone can overcome their past mistakes, so everyone can have an opportunity to [know] what it feels like to be a complete citizen again."

Florida Gov. Ron DeSantis appeared unmoved, saying only that he would take Meade's request for a pardon "under consideration."