Accessibility links
Kamala Harris Faces Supreme Court Hearings In A New Role Kamala Harris made her national reputation as a sharp, partisan questioner in Senate hearings. As a vice presidential nominee, that may not be her approach in the next Supreme Court confirmation. 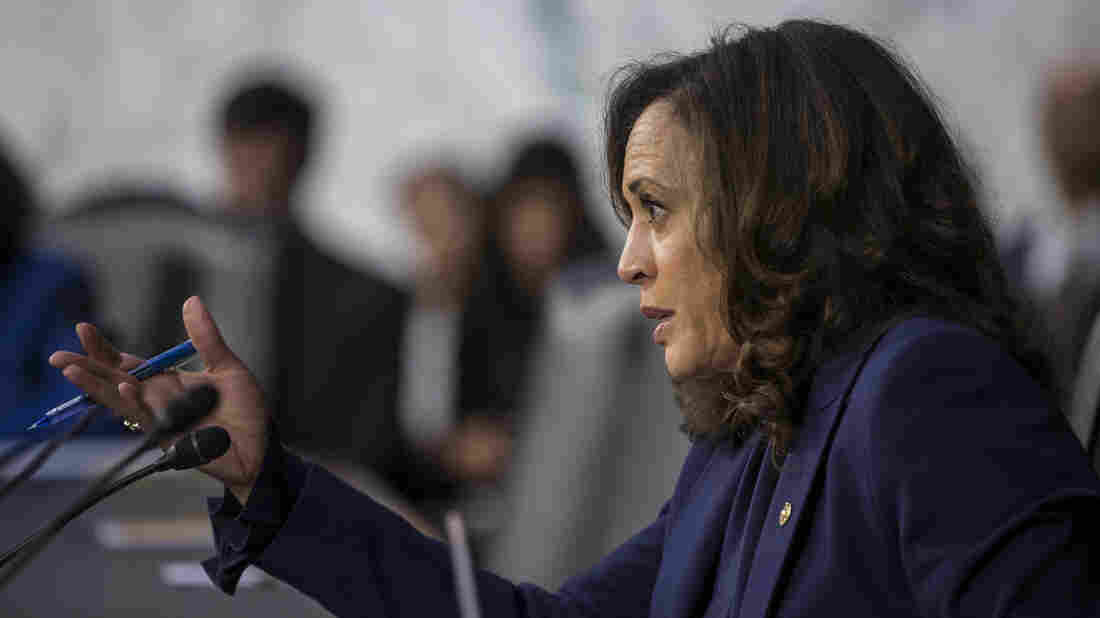 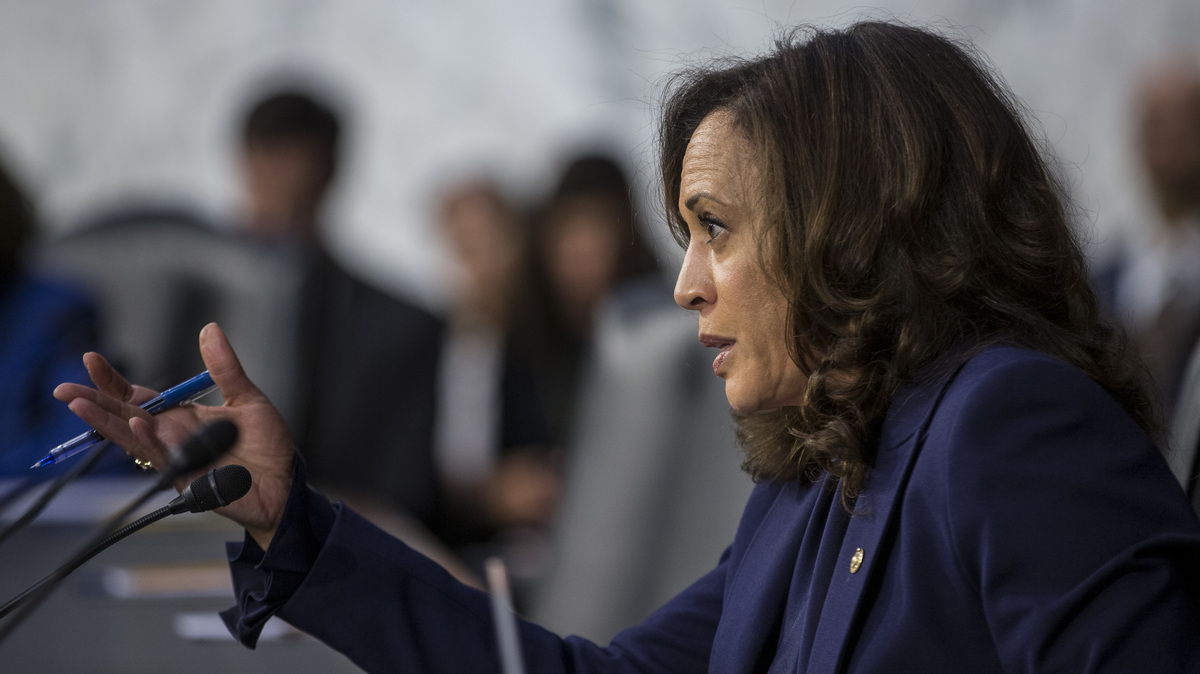 Some of the most memorable moments of Kamala Harris' political career have come in the Senate committee hearing rooms.

The list of witnesses and nominees the California senator has flustered or put on the defensive is long, and it includes many top conservatives whom progressives villainize: Attorney General William Barr, former Attorney General Jeff Sessions, former White House chief of staff John Kelly and, perhaps atop that list, Supreme Court Justice Brett Kavanaugh.

During Kavanaugh's contentious confirmation hearings in 2018, Harris' questions often yielded some of the biggest moments.

So it was notable that when reporters asked whether she plans to even take part in the upcoming confirmation hearing for President Trump's yet-to-be-named pick to fill the seat held by the late Justice Ruth Bader Ginsburg, Harris declined to answer the question.

Who Is Amy Coney Barrett, Front-Runner For The Supreme Court Nomination?

On paper, Harris is the most junior Democrat on the Judiciary Committee. But no one inside or outside the hearing room will view the Democratic vice presidential nominee that way when it's her turn to question President Trump's court nominee.

When Harris' fellow Democrats on the Senate Judiciary Committee were asked whether they expect her to take a leading role in a confirmation battle, which will possibly be nastier and more pivotal than Kavanaugh's, they responded with a sense of ambivalence.

"She's a little busy right now," Hawaii Sen. Mazie Hirono told NPR. "There are going to be a lot of us playing the committee role."

The answers had a lot to do with the fact that Democrats see the impending presidential election as a make-or-break moment for democracy itself and the most consequential race they've faced in generations, if ever. "I just want Joe [Biden] and Kamala to get elected," Hirono said. "That should be their focus right now, in my view. I'm pretty sure she shares my perspective on the next nominee."

But this view also has to do with the fact that Harris, as the party's vice presidential nominee just a few weeks before the election, faces a much different set of political circumstances than she did at previous high-profile hearings.

Take the 2018 Kavanaugh hearing. Harris was still relatively new to the political scene and weighing a possible presidential campaign. Grilling Kavanaugh on topics like abortion, and whether he had improperly discussed the ongoing Mueller investigation with President Trump's personal attorney, helped her score points with progressives and Democratic partisans online and in popular culture, just months before the primary campaign began.

'Honor Her Wish': Trump Met With Boos As He Pays Respects To Ruth Bader Ginsburg

Two years later, she'll represent not just herself, but Biden and his possible presidential administration, in the hearing room. (Despite Harris' non-answer on Capitol Hill this week, a Biden campaign official told NPR she does plan to participate in the eventual hearing.)

Biden has decried Republicans' decision to push ahead with a vote on a pivotal Supreme Court seat in the final days before a presidential election, and he repeatedly warns that the new justice could throw out the Affordable Care Act, which will once again be on the Supreme Court docket in November.

But a large part of Biden's argument to voters, especially the more moderate voters his campaign sees as key to an electoral victory, centers on the idea of returning to normalcy and a sense of decency in politics.

Lines of partisan questioning and a prosecutorial grilling of a potential Supreme Court justice might not fit with that message, especially in a moment when millions of people will already be casting early ballots.

"There'll be a lot of eyes on her and how she approaches this, both tonally and substantively," said David Axelrod, who was the top strategist on Barack Obama's campaign in 2008 and now works as a contributor to CNN.

Axelrod faced similar tactical choices in the final weeks of that election, when a global economic meltdown briefly forced Obama off the campaign trail and back to the Senate, to vote on – and at moments, help Democrats negotiate – emergency legislation aimed at propping up the failing economy.

Axelrod said Harris and the Biden campaign face some challenging dynamics here: most notably, the fact that Republicans likely have the votes they need to approve their nominee.

He ventured that one approach Harris might take is sticking to broader themes, like whether the seat should be filled so quickly and so close to an election, rather than grilling the nominee about her views on polarizing issues like abortion.

"I think the thing that makes this different is, does she do it within the strategy of the campaign? Because it's very clear the focus of Biden is on the issue of health care and the Affordable Care Act," Axelrod said.

The confirmation hearing will be a major focus of the news in the final weeks of the campaign. Though, New Jersey Sen. Cory Booker points out that no matter what she focuses on that day, Harris has another big platform right now.

"I don't know if you can divide a person in that way," he said in response to a question about whether Harris should spend more time on Capitol Hill and less on the campaign trail during the confirmation fight.

"She is a United States senator who is a candidate for vice president. And she will bring all of her voiced experience, and really her brilliance, to the arguments we're making, no matter what role she's in," Booker said.