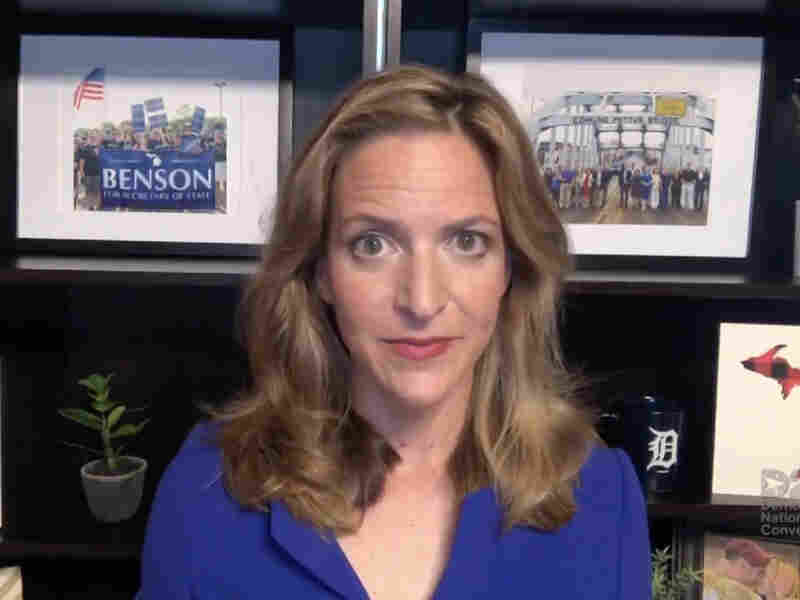 Michigan Secretary of State Jocelyn Benson addresses the virtual Democratic National Convention on August 20. The convention, which was once expected to draw 50,000 people to Milwaukee, Wisconsin, is now taking place virtually due to the coronavirus pandemic. Handout/DNCC via Getty Images hide caption 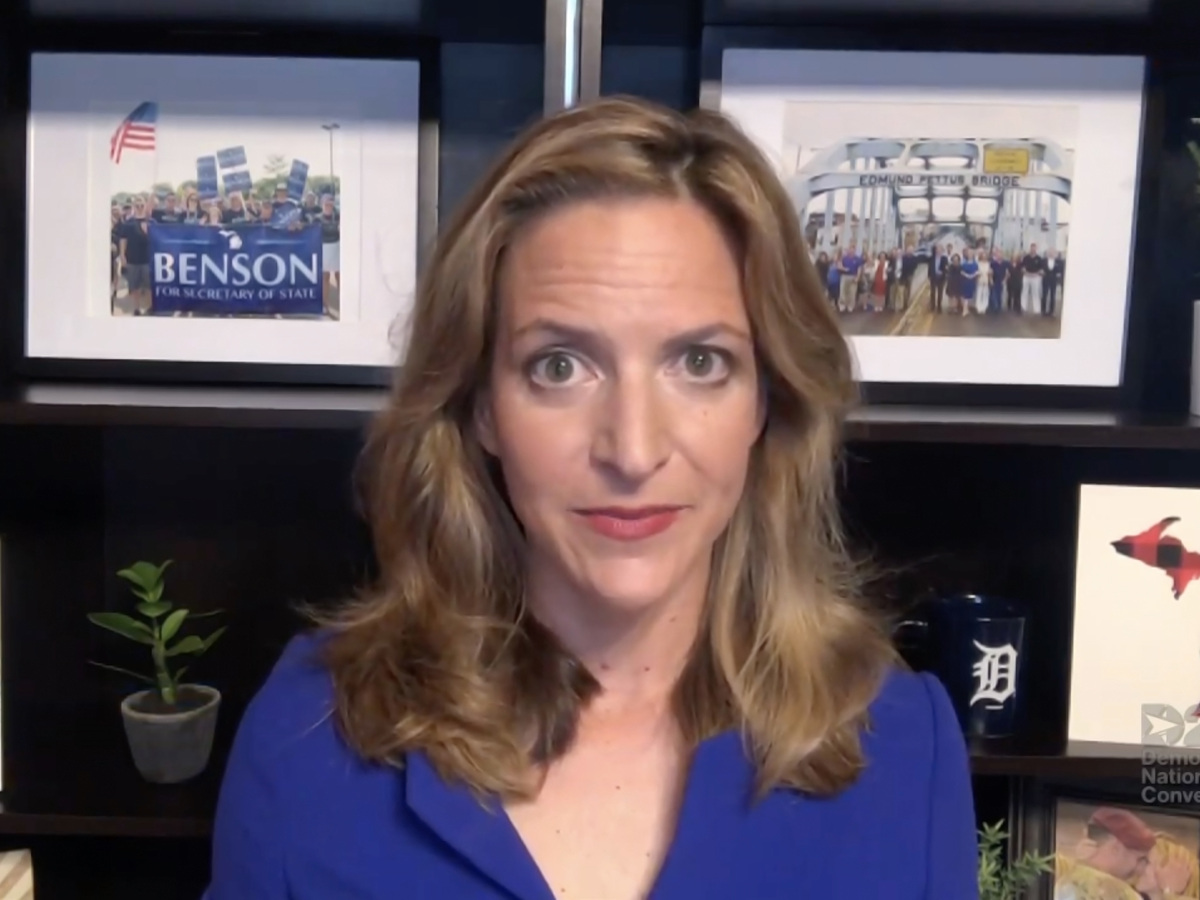 Michigan Secretary of State Jocelyn Benson addresses the virtual Democratic National Convention on August 20. The convention, which was once expected to draw 50,000 people to Milwaukee, Wisconsin, is now taking place virtually due to the coronavirus pandemic.

Early voting via absentee ballot began in Michigan on Thursday, making 2020 the state's first presidential election in which residents can vote early with an absentee ballot without needing a reason.

The state's 16 electoral votes could be decisive in this year's presidential election. Four years ago, Donald Trump won Michigan by fewer than 12,000 votes — less than one percent. With less than six weeks until Election Day, the state has already seen a record number of people request to vote by mail.

"About 2.4 million citizens of the expected 5 or 5.5 million we expect to vote this fall in Michigan have requested to vote by mail," Secretary of State Jocelyn Benson told NPR's Weekend Edition on Saturday. "And that's more than ever before in our state's history and we know that number is just going to continue to climb."

Given the volume of absentee ballots exected, Benson cautioned that final results are unlikely to be ready on Election Night.

"We want the country to know Michigan is going to be working hard, efficiently to tabulate all these ballots, but it may take a few days to get results and again that's the process working."

"Under state law, we can't start tabulating these ballots until 7 a.m. on Election Day," Benson said. "When we look at the reality that there's going to be 3 million, at least, citizens voting by mail, 3 million ballots if not more to tabulate beginning at 7 a.m. on Election Day, it is simply impossible to get through all of that in 13 hours or even in 20 hours, and so we're planning to take a few days to ensure the process is secure and accurate and that's certainly what the work entails."

There's been some opposition or reservations about beginning to count, hasn't there?

Yes and we've worked with our legislature to give our clerks a little more time to process the ballots prior to Election Day, which basically means opening the envelopes, checking the signatures, flattening out the ballots, [and] preparing them to be tabulated. And so they've given our clerks an extra day to begin that process, which is helpful, but of course doesn't go nearly enough to address the entire issue. Many other states have as many as seven days for that pre-processing.

Let me ask about in-person voting as people may choose to do it on, I guess, what we still call Election Day. There were long lines in some cities in Michigan earlier this year, as I don't have to tell you, for primary elections. Are you worried about that? Do you think the earlier voting might thin out the lines?

Yes, I certainly do. One of the things we have seen this year is by spreading out and giving citizens options to either vote early or vote through the mail, we've been able to manage record turnout with minimal lines and crowding on Election Day. Now we've also kept all of our precincts open, which we've been able to do through a very significant aggressive poll worker recruitment effort that we began in April. And when you look at other states, what they do have those long lines, oftentimes it's related to the closure of precincts or the consolidation of precincts.

And of course people are still voting in the middle of a pandemic. This has to cause you some concern. What steps are you taking to try to guarantee the safety of voters and election workers?

While keeping our precincts open while encouraging citizens to vote early or through the mail and minimizing crowding, we've also provided election workers with PPE, with masks, with gloves, with hand sanitizers. The voting booths comply with our CDC social distancing guidelines to, again, minimize the potential for crowding. All of that has enabled us to create safe polling places and, at this point, I feel very confident that voters will not have to risk their health in order to cast their vote in person.

Andrew Craig and Hadeel Al-Shalchi produced and edited the audio version of this story.