Accessibility links
Black Americans Buy Guns, Firearms For Protection Amid Fight For Racial Justice As the U.S. faces a fight for racial justice in the aftermath of police killings of George Floyd and Breonna Taylor, some Black Americans are considering how they can best protect themselves. 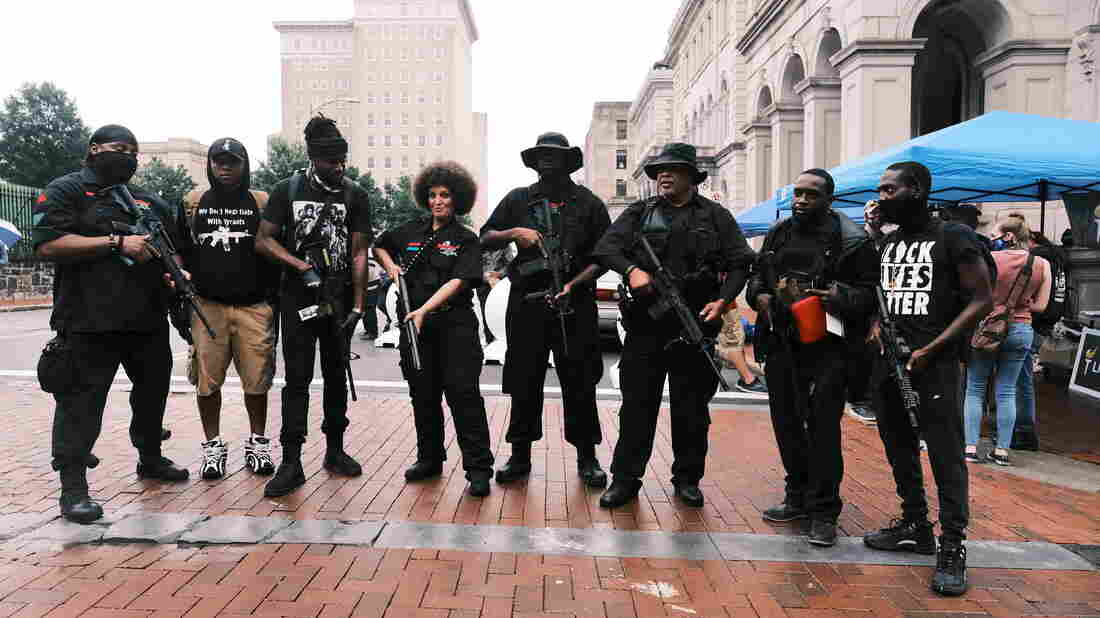 Demonstrators pose for photos with their guns during an open carry rally on Aug. 15 in Richmond, Va. The open carry rally is organized by an activist group known as BLM757 in support of the Black Lives Matter movement and the Second Amendment. Eze Amos/Getty Images hide caption 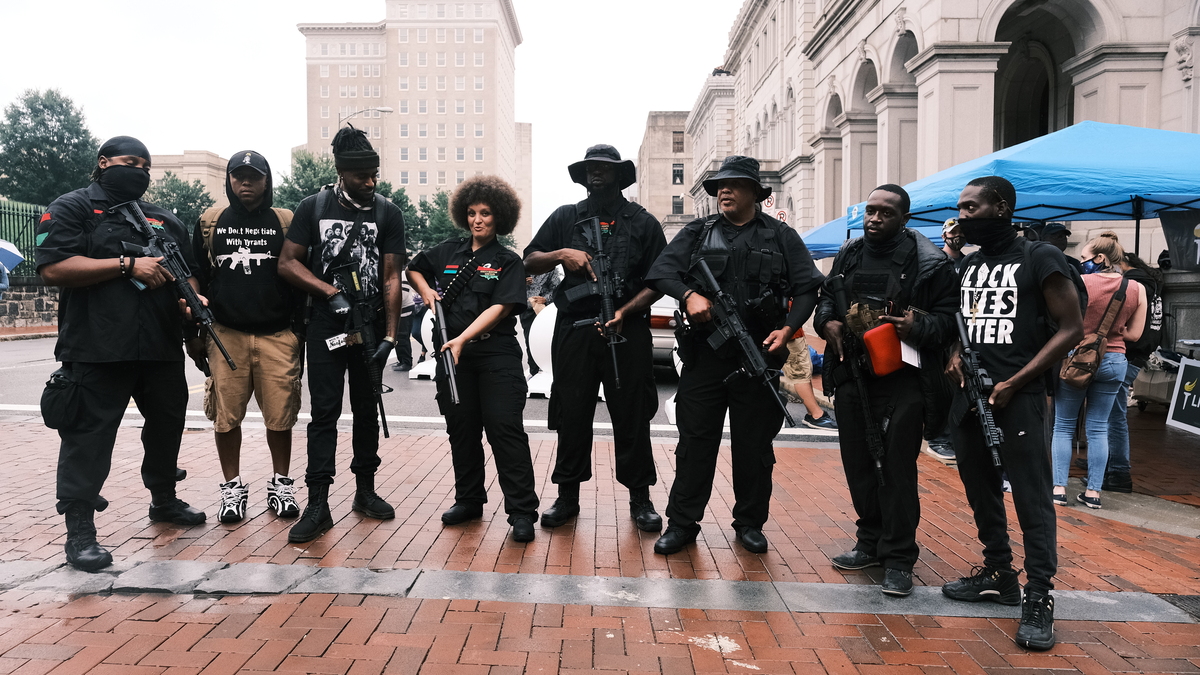 Demonstrators pose for photos with their guns during an open carry rally on Aug. 15 in Richmond, Va. The open carry rally is organized by an activist group known as BLM757 in support of the Black Lives Matter movement and the Second Amendment.

Editor's note: NPR will be continuing this conversation about Being Black in America online and on air.

Bruce Tomlin, a 63-year-old truck driver from New Mexico, said he was never really a "gun person." Then he saw a video of three white men following and fatally shooting Ahmaud Arbery while he was jogging.

"The man is trying to get away and they're just gunning him down in the street like he was a dog," Tomlin said about watching the video of Arbery. "It's made me hypervigilant. It has made me nervous. I'll even admit to being a little bit scared sometimes."

So he bought a gun. And he's planning on buying more.

"I just feel like in my viewpoint, every Black person in America, especially Black males, needs to have some type of protection with them as often as [they] can, because I think the political climate [is] getting to the point where it's just going to be a lot of violence coming our way," Tomlin said. "I just feel safer now having a gun. And I didn't always feel that way. I've never been the world's biggest fan of guns, but I just don't feel safe without one."

In early June, NPR reached out to Black Americans to ask about their personal experiences in this country. Nearly 500 people responded, some of whom described wanting to buy — or decidedly not wanting to buy — firearms for self-defense in response to the recent fight for racial justice.

Tomlin is one of many Black Americans who recently bought firearms for the first time, faced with a combination of the coronavirus pandemic and the fight for racial justice.

"The highest overall firearm sales increase comes from Black men and women, who show a 58.2% increase in purchases during the first six months of 2020 versus the same period last year," Jim Curcuruto, the National Shooting Sports Foundation director of Research and Market Development, wrote in a report, according to AOL News. "Bottom line is that there has never been a sustained surge in firearm sales quite like what we are in the midst of."

Philip Smith, the president of the National African American Gun Association, said that he had a massive influx of members in two waves: Once, in 2016, following President Donald Trump's election, and again during the recent racial justice protests. He said a year ago, NAAGA was getting maybe 10 new members a day; now, its seeing 10 new members an hour. He said there are many factors pushing Black people to buy firearms, including "the politics right now, the pandemic and the racial tone: Those three things together act as kind of a three-headed monster that is driving folks to come to us."

While there may be an uptick in Black people owning guns in the United States today for protection, it's not necessarily a new phenomenon. The majority of gun owners are white men, but in a 2017 survey by the Pew Research Center, 24% of Black people reported owning a gun, compared to 36% of white people.

Ifeoma Ozoma, a 28-year-old who works in tech policy, owned guns for self-protection long before the recent protests erupted across the nation. She grew up in Alaska, with familiarity with firearms, and always knew she wanted to own one for self defense. So, after graduating college, she started buying them.

"My gun ownership is not connected to the political movement," Ozoma said. "It's connected more to the history of the country, and I am adherent to both the First and the Second amendment and so I am practicing both, I believe, in owning guns."

Across races, since the 1970s, gun ownership has shifted away from hunting and sport and towards self-defense — and one of the most fierce advocates for the right to bear arms in public, particularly for protection, was the Black Panthers. Malcolm X said African Americans had to defend themselves "by whatever means necessary." Even Martin Luther King Jr. applied for a permit to carry a concealed firearm in 1956, shortly after his house was bombed. His application was denied, but he had armed supporters guarding his home.

"I'm a student of history and political science, and I think what we're dealing with now, and it's the same with most societies, is like frog boiling, where you don't realize how bad things are because they just get incrementally worse," Ozoma said. "And we've taken some big, big leaps this year in getting incrementally worse. But if there was a societal breakdown, my first assumption is not that the police ... is going to make a priority of protecting Black citizens. And so I would like to have my own form of protection." 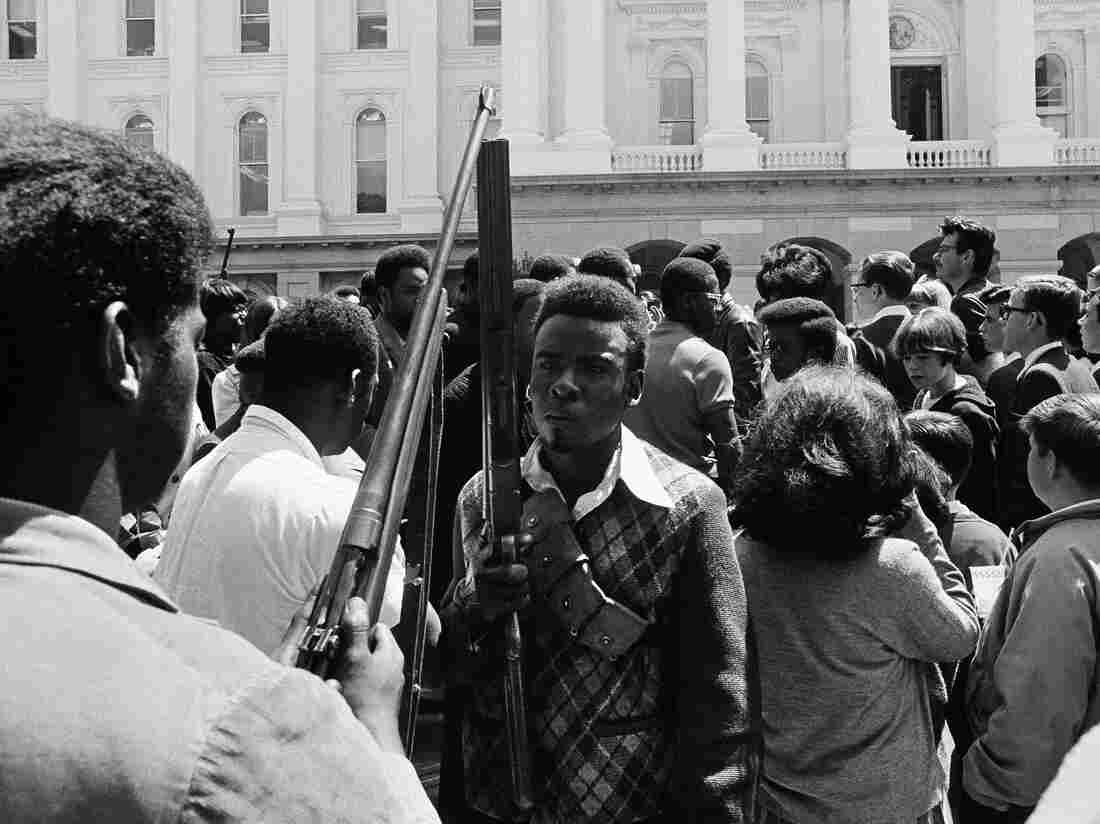 Armed members of the Black Panther Party leave the Capitol in Sacramento May 2, 1967. The Panthers entered the Capitol fully armed and said they were protesting a bill before the Legislature restricting the carrying of arms in public. AP hide caption 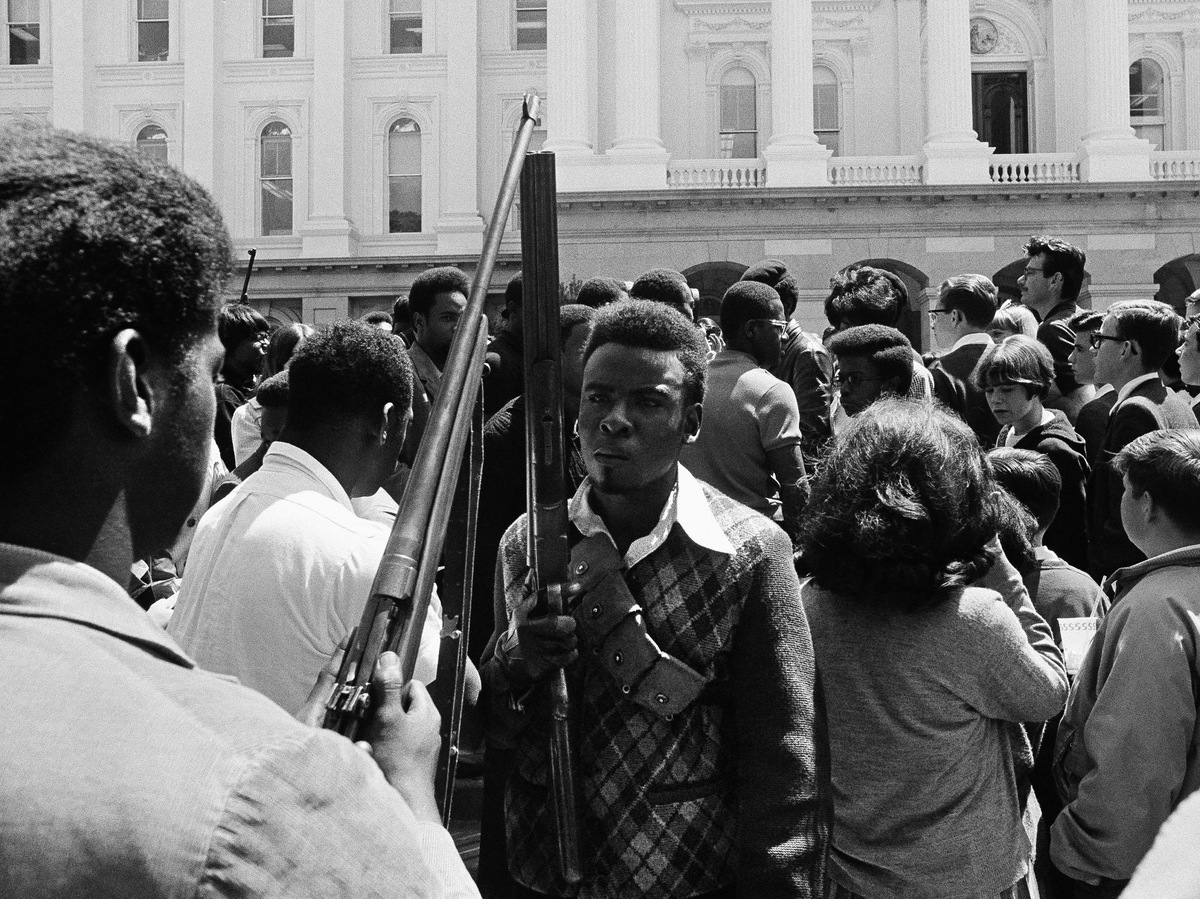 Armed members of the Black Panther Party leave the Capitol in Sacramento May 2, 1967. The Panthers entered the Capitol fully armed and said they were protesting a bill before the Legislature restricting the carrying of arms in public.

Some people in the United States do tend to buy firearms in reaction to emergencies: Gun sales spiked after the Sept. 11 terrorist attacks and in response to the 2012 shooting at Sandy Hook Elementary School in Newtown, Conn., and, according to the FBI's National Instant Criminal Background Check System, twice as many Americans underwent background checks for handgun purchases in March 2020 as they had two months earlier.

Kat Traylor, of Aurora, Colo., first started thinking about buying a weapon when she saw empty grocery shelves at the start of the pandemic. Like Ozoma, she's thought about chance encounters with police, too.

"Elijah McClain was murdered in my city," Traylor said, referring to the death of a Black man who died following an encounter with law enforcement last year.

Police put McClain in a chokehold. Paramedics injected him with an anesthetic called ketamine. Aurora has since opened an independent investigation into his death, as has Colorado's attorney general. McClain's parents have filed a federal civil rights lawsuit against the city and several of its police officers. Traylor said she doesn't necessarily envision using her firearm, particularly against police, but having it gives her some sense of control.

"What we as a family had to determine is how do we want to...die," she explained slowly. "It's sad to look at it that way. Do we want to die not being prepared? Or at least trying to protect ourselves. That's how you weigh that." 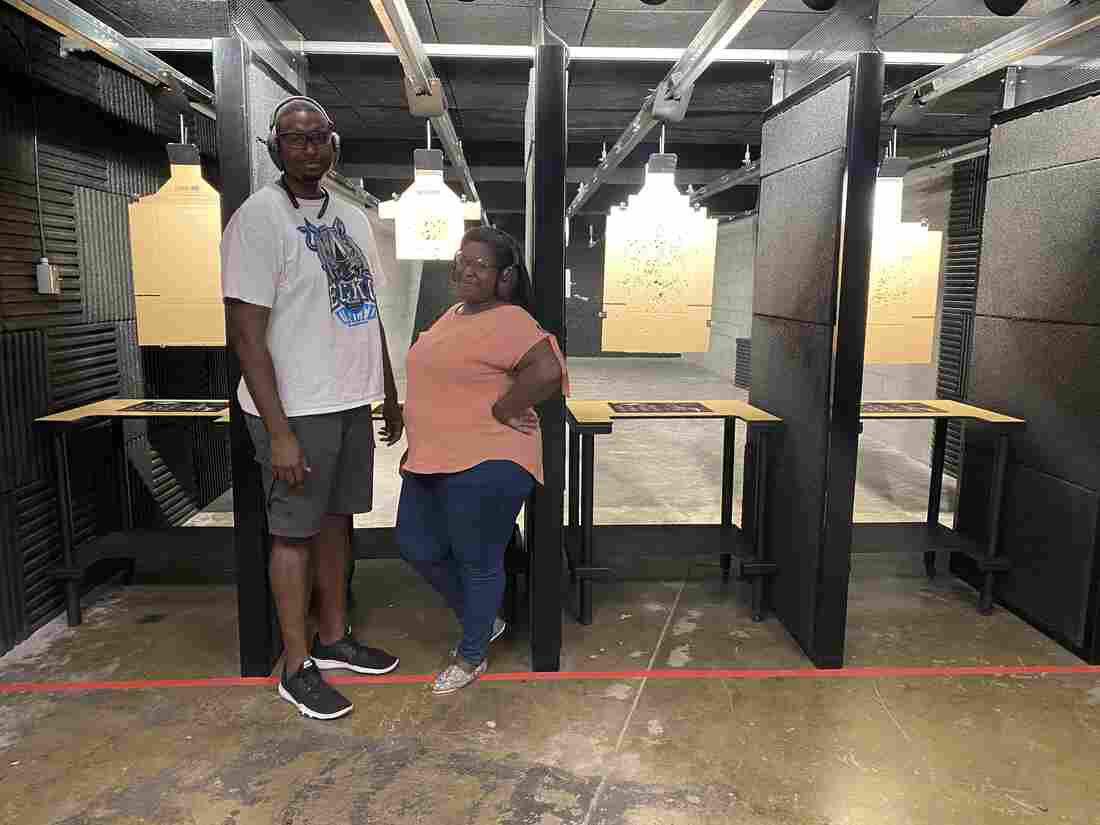 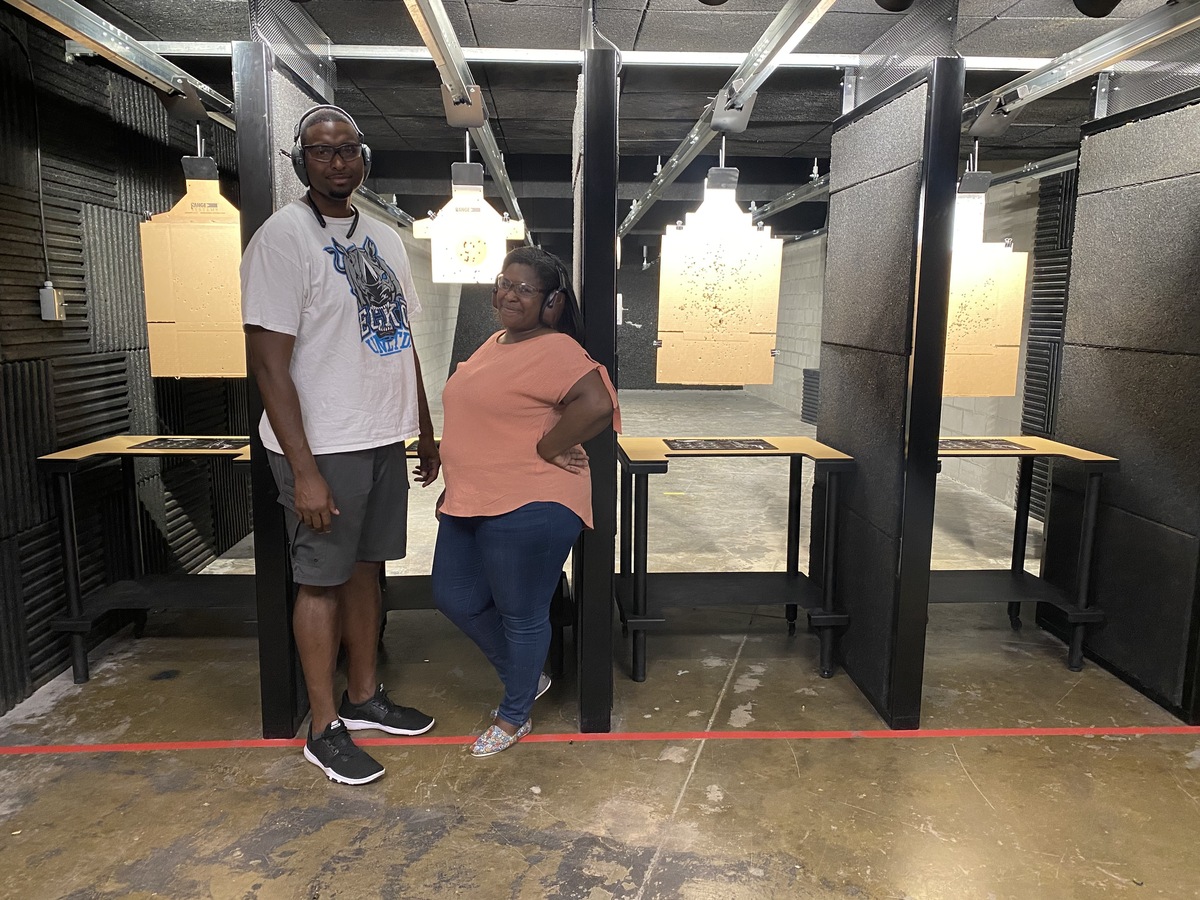 Kat Traylor and her husband Kevin Cox at a gun range.

At the same time, data shows owning a gun might not actually make you safer. Larry Green, a 68-year-old in Phoenix, doesn't want to buy or own a gun for exactly that reason. He pointed to Philando Castile, a registered gun owner who was shot and killed by a police officer on July 6, 2017, in a St. Paul, Minn., suburb after he told the officer he was armed. Green was pulled over in Phoenix the week Castile was killed, and the officer asked if he had a gun in the car. He was thankful that he didn't.

Ozoma understands the point that Castille was a legal gun owner who was shot and killed anyway, but she says that doesn't make her shy away from her gun ownership.

"Philando Castile was just pulling for his license to show that he had the right to have a gun. Breonna Taylor was lying in bed with her partner who was lawfully using his weapon against some people who broke into their apartment and did not announce who they were," Ozoma said. "So it doesn't really matter either way, whether I'm armed or not, I could be killed or be attacked. And I'd rather be armed."

"I'd rather go to trial than go to the cemetery," he said.