Accessibility links
What Amy Coney Barrett's Nomination Means For 2020 Election The focus on the court could help energize conservatives in key states. Progressives are fired up, too — immediately after Saturday's announcement, Democrats tied Barrett to a fight for health care. 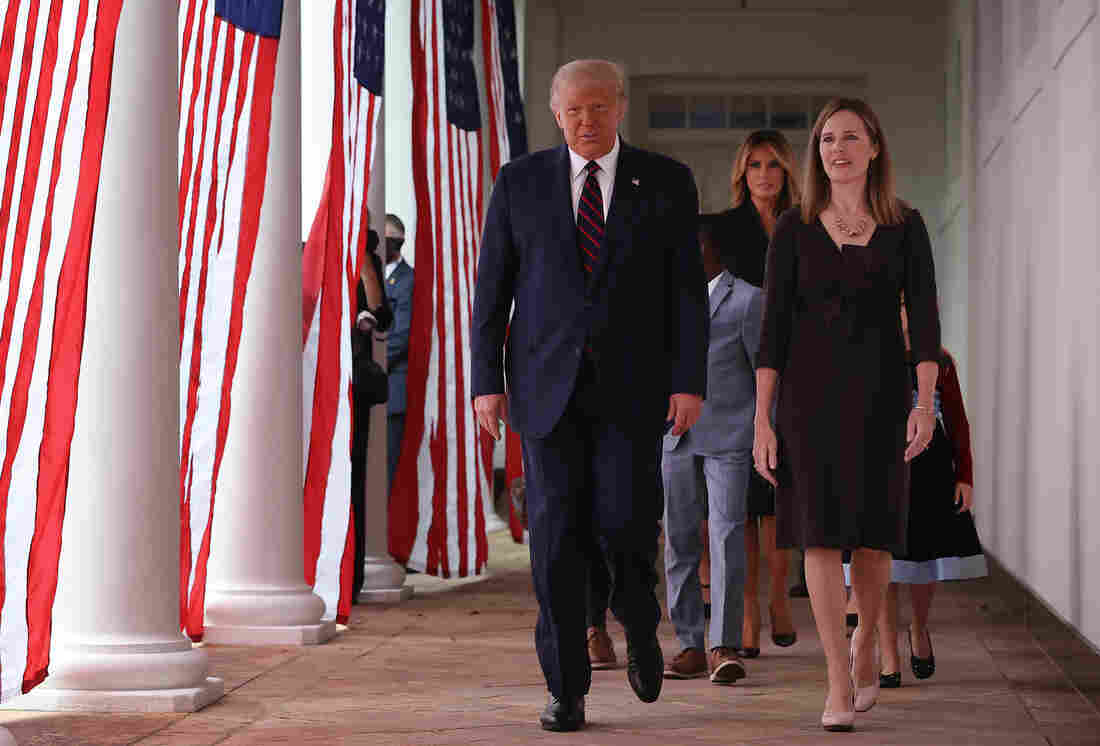 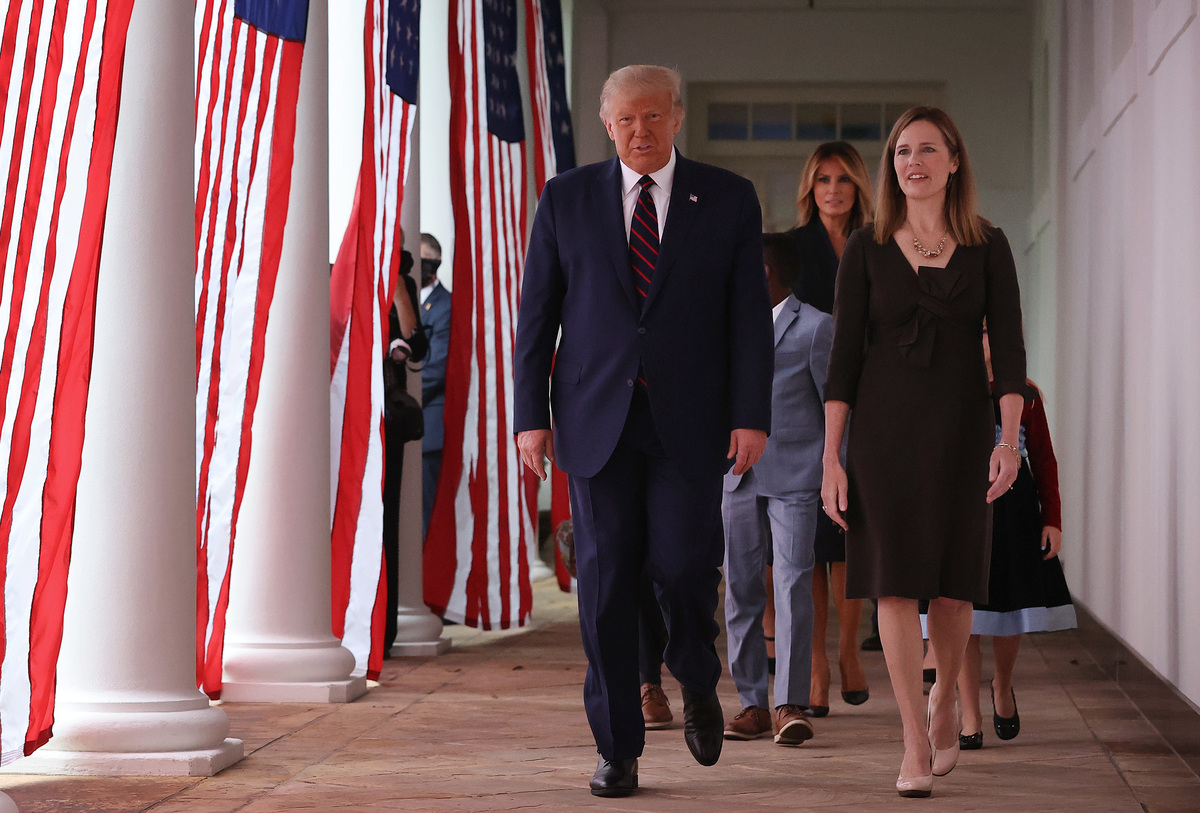 President Trump and Supreme Court nominee Amy Coney Barrett walk along the Rose Garden colonnade on Saturday. The focus on the court just weeks before the election could help energize conservatives in key states.

Supporters and opponents of Amy Coney Barrett's nomination to the Supreme Court wasted no time launching a high-pitched battle over her confirmation, with just 37 days until the election.

Senate Majority Leader Mitch McConnell, R-Ky., has the support of Republicans to move forward with the confirmation process and confirm Barrett on the Senate floor before Nov. 3, barring any development in her vetting.

But in a flurry of emails, interest groups representing pro- and anti-abortion rights, gun issues, health care and more pledged to fight hard — making the Supreme Court an issue that could be front and center in the closing days of the presidential election.

It also means it will likely be a central issue in key Senate races around the United States. Control of the chamber is in play this election, and Republicans are fighting off stiff challenges in several states where the issue is beginning to pop up in ads.

Recent polls have shown Democratic nominee Joe Biden ahead of President Trump, but the focus has largely been on the president's handling of the coronavirus pandemic. Changing the subject to the future of the court and the prospect of a 6-3 conservative majority could help energize Republican voters in key swing states and inject new urgency into the election.

A rally of liberal groups in front of the Supreme Court was scheduled for Sunday afternoon, and senators who expected to be on recess for the final fall stretch to campaign will return to the Capitol early this week instead to handle a confirmation process that will take center stage, with efforts to put together another coronavirus relief package fading.

Biden Responds To Trump Court Pick: 'Health Care Is On The Ballot'

Barrett is expected to begin meeting with senators early this week, and the Senate Judiciary Committee is slated to begin hearings on Oct. 12. The panel is expected to hold four days of hearings with time for the traditional day of opening statements, questioning of Barrett and testimony from outside witnesses. That doesn't leave a lot of time for the panel to finish the FBI background check and review answers to the committee's lengthy questionnaire that nominees submit ahead of the hearings.

"This should be a straightforward and prompt confirmation. It should be very easy — good luck," Trump said in announcing his pick at his Saturday event at the Rose Garden, but the crowd of supporters laughed. "It's going to be very quick. I'm sure it will be extremely noncontroversial. We said that the last time, didn't we?"

But while Trump is predicting expediency this time, senators on both sides of the aisle and outside groups gearing up for a contentious process have no illusions that it will be easy, even with the outcome not really in any doubt.

Mike Davis, the founder of the Article III Project, a group created to support the president's judicial nominees, said the night before Barrett's nomination was announced that his group would "take off the gloves, put on the brass knuckles, and punch back on the left's attacks on President Trump's next Supreme Court nominee — a fight that will make Kavanaugh's look like a walk in the park."

As Barrett acknowledged Saturday, she would be filling the seat left by the death of a trailblazing woman — Ruth Bader Ginsburg — who became a pop culture icon on the left, with the nickname the "Notorious RBG."

GOP supporters of Barrett were already trying to frame her pick as appealing to women. The Senate Republicans' campaign arm began selling T-shirts with "Notorious A.C.B." emblazed on them.

Conservatives are focusing on Barrett's record as a federal judge and the fact that she received support from three Senate Democrats when she was confirmed to the 7th U.S. Circuit Court of Appeals in 2017. They are embracing her as a justice in the mold of Antonin Scalia, for whom she clerked. Barrett said on Saturday about Scalia, "His judicial philosophy is mine too."

For McConnell, who is balancing concerns about control of the chamber with his chief goal of remaking the federal judiciary, the possibility of confirming Barrett, who would install a conservative majority on the court potentially for decades, is incentive to push ahead.

But a Washington Post-ABC poll released on Friday shows that there could be backlash to the vote this close to the election. Fifty-seven percent of those polled said the nomination of a justice to the high court should wait until after the election, and 38% backed action now by the president and the Republican-controlled Senate.

Trump was eager to make the issue a staple of his stump speech: He appeared at a rally on Saturday night in Middletown, Pa., in front of a large red screen that said, "Fill That Seat!" And he touted his slew of judicial appointments, each one a life term.

Democrats, who recognize they don't have the votes to block Barrett's confirmation, are pivoting to make the debate about health care and the future of the Affordable Care Act. A case pending before the high court's fall session has the potential to dismantle the law, and Senate Democrats one after the other pointed out that Barrett has publicly opposed the law and argued that adding her to the court in the middle of a pandemic risks coverage for millions of Americans.

"The deadly COVID-19 pandemic has killed more than 200,000 Americans in a matter of months. Yet, instead of addressing the many life-and-death issues facing working families during COVID-19, Trump and the Senate Republicans are focused on jamming through this nomination in a transparent grab for power so they can achieve their long-sought goal of repealing the Affordable Care Act and ripping away healthcare from millions — including every COVID-19 survivor who now has a pre-existing condition," Illinois Democratic Sen. Tammy Duckworth said in a written statement announcing she was a no vote on the nominee.

Outside groups framed Barrett as potentially casting the deciding vote on the court on the ACA. Demand Justice, a progressive group formed to oppose the president's nominees, dubbed Barrett "anti-ACA Amy Coney Barrett" and argued that the process moving ahead to hearings in weeks was unfair. Saturday night, the group projected the words "SAVE HEALTH CARE" on the side of the Trump International Hotel in Washington, D.C.

On the Trump Hotel right now.

Eleanor Smeal, president of the Feminist Majority Foundation, a liberal group focused on equal rights and social justice, told NPR before the president made his Barrett nomination official that Ginsburg's death was a "wake-up call" that would help put the issue of health care front and center for many who may have taken the issue for granted.

"I know that it's energized our side. ... None of us wanted this to happen, but it does make very visual trends that we knew was there. Those of us who are very active knew that this is an extremely important election," Smeal said.

Smeal's group joined with other women's organizations to create a super PAC called Vote for Equality that is setting up efforts on college campuses in seven states with competitive Senate races to attempt to educate younger voters about the legal issues that could end up before the Supreme Court.

Biden's running mate, Sen. Kamala Harris, D-Calif., is a member of the Senate Judiciary Committee and will get the chance to question Barrett, a moment that will likely get wall-to-wall national television coverage.

But with little ability to alter the outcome, she may use the opportunity to highlight the issues she thinks are at stake in the election and spend less time drilling down into controversial topics that divide voters whom the Democratic ticket is hoping to attract.

The two Democrats still in the Senate who backed Barrett's 2017 nomination to the federal bench — Sen. Joe Manchin of West Virginia and Sen. Tim Kaine of Virginia — said they would vote no now because of how Senate GOP leaders are handling the process.

"I cannot support a process that risks further division of the American people at a time when we desperately need to come together. I will not vote to confirm Judge Coney Barrett or any Supreme Court nominee before Election Day on November 3rd. I urge my Republican friends to slow down, put people before politics, and give their constituents a chance to vote," Manchin said.