Accessibility links
Al Sharpton: Policing In America Will Change Because Of George Floyd's Death Rev. Al Sharpton spoke with NPR about his new book Rise Up. Of George Floyd's death, he said: "I had begun to see, by the time of the funeral, there had been a movement that was unlike others." 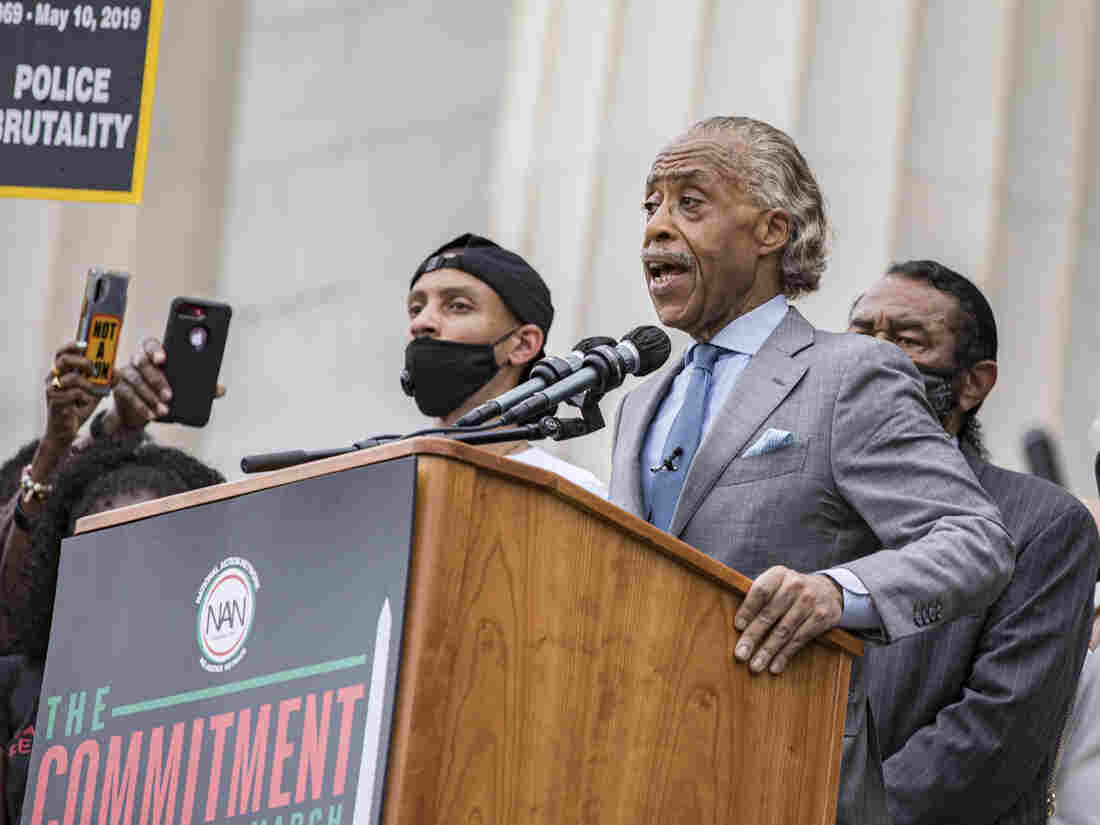 Rev. Al Sharpton speaks at the 2020 March on Washington, officially known as the Commitment March: Get Your Knee Off Our Necks, at the Lincoln Memorial on Aug. 28 in Washington. Daniel Knighton/Getty Images hide caption 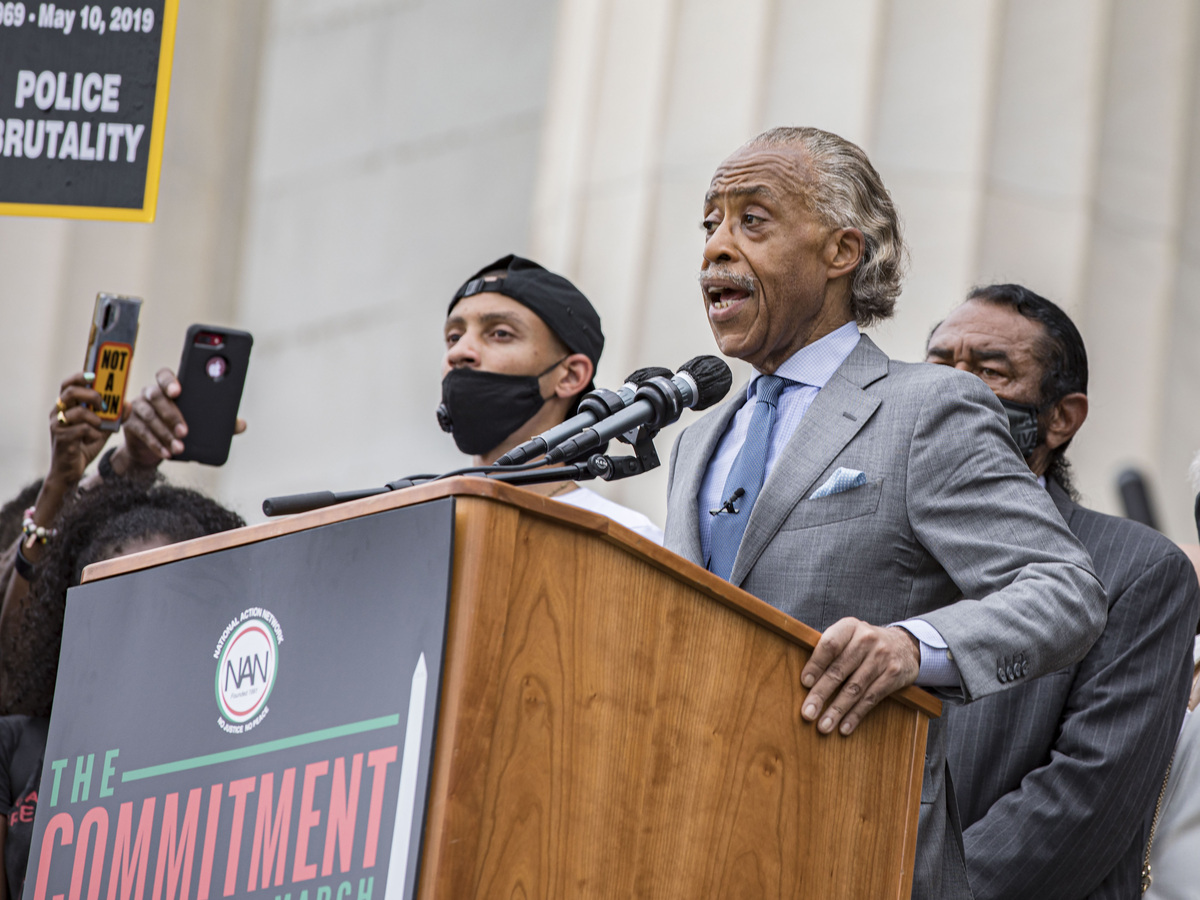 Rev. Al Sharpton speaks at the 2020 March on Washington, officially known as the Commitment March: Get Your Knee Off Our Necks, at the Lincoln Memorial on Aug. 28 in Washington.

Years ago, Al Sharpton was a young preacher and civil rights activist. The New York City tabloids portrayed him as a questionable figure, who was ultimately sued for defamation when he accused a prosecutor of racism.

Today, of course, Trump is president. And Sharpton, gray-haired, is a kind of elder statesman.

After George Floyd was killed by police this spring, Sharpton was asked to deliver a eulogy: "Go on home, George; get your rest, George; you changed the world, George; we gonna keep on marching; George, we gonna keep fighting, George."

Sharpton has written a new book called Rise Up: Confronting a Country at the Crossroads. 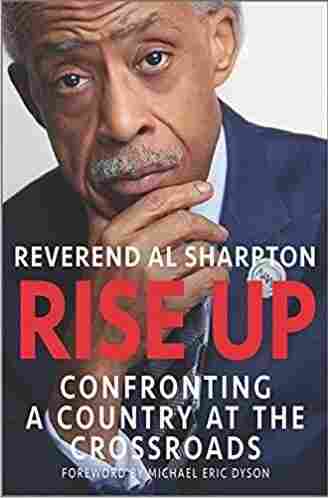 Rise Up: Confronting a Country at the Crossroads, by Al Sharpton Hanover Square Press hide caption

On what he meant by "You changed the world, George" in Floyd's eulogy

I had begun to see, by the time of the funeral, there had been a movement that was unlike others, that was very multiracial and intergenerational around the country, that I felt would change some policing laws and some policing policies, unlike before. And I wanted to say to George, who obviously was not where he could hear me, that you have really changed the world. Policing in America, I think, will change because of George Floyd.

On why this is such an excruciating moment for people of all races, persuasions and ages

I think it is incited because the world is falling apart. And I hope that we can bring it to where we go on to a better place. I think one of the things that inadvertently helped it, everyone was shut in and shut down and was home watching the news. So people began seeing this tape of this man laying on the ground with a knee on his neck for 8 minutes and 46 seconds. I think the outrageous behavior of it, coupled with the fact that there was this captive audience globally, is what really prompted a lot of people. Because had we not been in a pandemic, I don't know if the same amount of people would have seen the actual tape and the footage that actually happened.

Well, I was preaching and I was — I had read, obviously, and knew the scriptures — but I think it was my mentors as I got older that said, 'Yeah, I would go and delve into the meaning of the scriptures.' So when you're a boy preacher, you know the rhetoric, but you don't know the substance behind it. And what I wanted to do, after I got in my 20s, is not be just a performer, but one that was really orating and bringing to the public the substance of it. So I could accurately talk about the battle of David and Goliath, but not really going into the mishaps of David and the fact that he was an unlikely person, even fighting Goliath and what Goliath represented. I think that it is very important that you have substance as well as style and not just be a show person, but be able to use your showmanship to drive something bigger than that and attract people to some context and content.

On being open about his history — and what he has learned

I'm the same person with a different understanding and maturity because I was always sincere and passionate, but I was not as cautious and studious — as you grow in profile and age, you also have to be cautious that you're going to be scrutinized if you're really passionate about what you're fighting for, you want to do things to solve it, not just express or vent your feelings.

I would say that you would have to then say that you feel that God is against some of the creators that he created, because President Trump has been used to divide people based on who they are and what they are. And that is inconsistent with my belief that God pours out his spirit among all flesh. And I feel that it is important that we understand that that is, to me, not the use of God. What I said with George Floyd is no one — if you were casting characters at a movie in Hollywood, you would not choose a George Floyd as the character that could change the country to having this serious dialogue around policing. But he became that symbol. And all throughout the Bible, whether it was David who was — even his father, didn't see much promise in him — whether it was any of the characters in the Bible. And many times in history, it's people that didn't have what we consider the proper or well-groomed background that were the ones that changed the world.