Accessibility links
Armenia-Azerbaijan Conflict Threatens To Spiral Into Full-Blown War Dozens of service members on both sides reportedly have been killed in violence that began Sunday in the disputed Nagorno-Karabakh region. The conflict has the potential to draw in NATO ally Turkey. 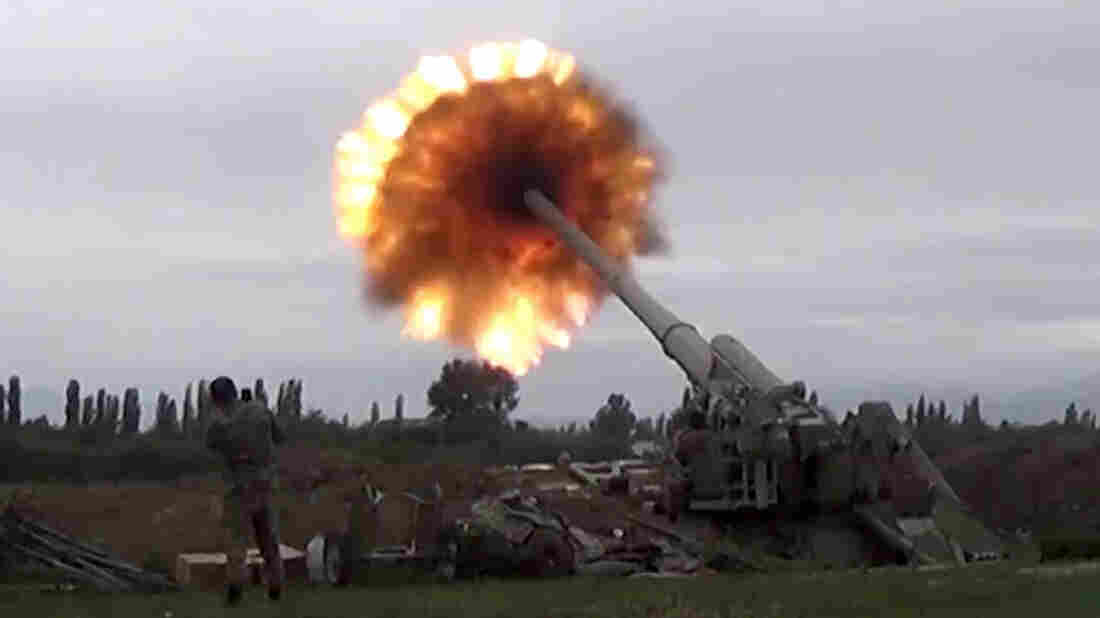 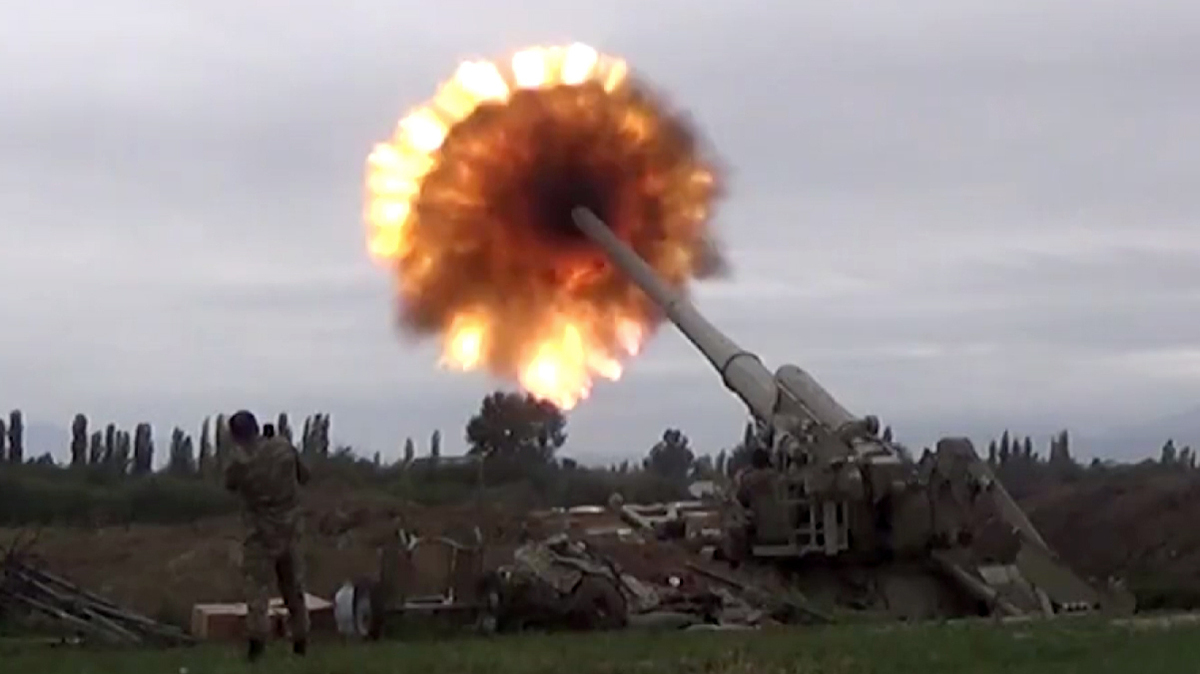 A howitzer fires munitions toward Armenian positions Monday. Violence between Armenia and Azerbaijan erupted Sunday in the disputed region of Nagorno-Karabakh.

A simmering conflict on Russia's volatile southern border is threatening to escalate into an all-out war, with the potential of drawing in NATO ally Turkey.

Fighting continued for a second day in the disputed Nagorno-Karabakh region, claimed by Armenians as well as by Azerbaijanis. Dozens of service members on both sides have been reported killed in a flare-up of violence that began Sunday morning.

The ethnic Armenian majority in the region fought a bloody war of secession from Azerbaijan as the Soviet Union fell apart three decades ago. A tense cease-fire — but no lasting peace — has since kept tensions high in the Caucasus, an area where Russia, Turkey and Iran have historically competed.

"The attack was coming. There were numerous signals, all saw them and did nothing for weeks," Olesya Vartanyan, a senior analyst for the International Crisis Group, tweeted. "There was a need for a pro-active international mediation. Many found reasons to OK this attack. If they stay silent now, expect a real war."

International mediation is formally in the hands of a group co-chaired by France, Russia and the United States. Russia, the dominant power in the region for 200 years, carries the most clout. It has a defense pact with Armenia and a military base in the landlocked country, but the Kremlin also maintains good relations with Azerbaijan.

Turkey's relations with Armenia are clouded by the Ottoman Empire's 1915 mass killing of Armenians, which many historians have described as genocide. Turks and Azeris share ethnic and linguistic kinship, and ties between neighbors Turkey and Armenia have been frozen because of the Nagorno-Karabakh conflict.

"Turkey continues to stand with the friendly and brotherly Azerbaijan with all its facilities and heart," Turkish President Recep Tayyip Erdogan said Monday, blaming Armenia for the renewed fighting.

The Armenian Foreign Affairs Ministry claims Azerbaijan is receiving "large-scale military-political support from Turkey" in the form of advisers and weapons, including drones. The ministry says the people of Nagorno-Karabakh, known as Artsakh in Armenian, are fighting a "Turkish-Azerbaijani alliance."

Azerbaijan, rich in oil and gas, has spent the past two decades building up its military.

"The settlement of the Nagorno-Karabakh issue is our historical mission," Azerbaijani President Ilham Aliyev told his security council on Sunday. "We must resolve this so that historical justice can be restored. We must do so to restore the territorial integrity of Azerbaijan."

The declaration of independence by the ethnic Armenian majority of Nagorno-Karabakh, a region inside Azerbaijan, set off a war with tens of thousands of casualties that ended in an uneasy 1994 cease-fire. No country, not even Armenia, has recognized Nagorno-Karabakh as independent of Azerbaijan.

The danger now is if the regular Armenian army gets drawn into the fighting with Azerbaijan, Vadim Mukhanov, a Caucasus expert at the Moscow State Institute of International Relations, told the Meduza news site.

"What we're seeing after the first day of escalation is that armor, aviation, heavy artillery and drones are being used, which suggests that this wasn't spontaneous but a well-planned operation," Mukhanov said. "If this conflict isn't stopped through serious outside pressure, then war will come, which would be a catastrophe. It would send ripples through the entire North Caucasus region and affect all major players, including Russia and Turkey."

Russian Foreign Minister Sergey Lavrov phoned his Turkish counterpart, Mevlut Cavusoglu, on Sunday. Russian President Vladimir Putin and Erdogan have had an uneasy partnership, and their interests have often clashed in Syria and Libya.

In Nagorno-Karabakh, Russia is calling for an end to hostilities and "maximum restraint" by all sides. Putin has spoken with Armenian Prime Minister Nikol Pashinyan, and the Kremlin said the Russian president will also talk with Aliyev "if necessary."

"Right now, the most important thing is to cease hostilities and not try to figure out who's right and who's wrong," Putin's spokesman, Dmitry Peskov, told reporters. He said Russia would use its traditionally good relations with Armenia and Azerbaijan to resolve the conflict.

The United States also enjoys friendly ties with both countries. "We have a lot of good relationships in that area," President Trump said Sunday regarding the Nagorno-Karabakh conflict. "We'll see if we can stop it."