Accessibility links
Climate-Fueled Wildfire Poses Lingering Threats A huge wildfire shut down a portion of a cross-country interstate highway for two weeks. Now, in a ripple effect of the fire, the newly treeless area is vulnerable to flash floods and landslides. 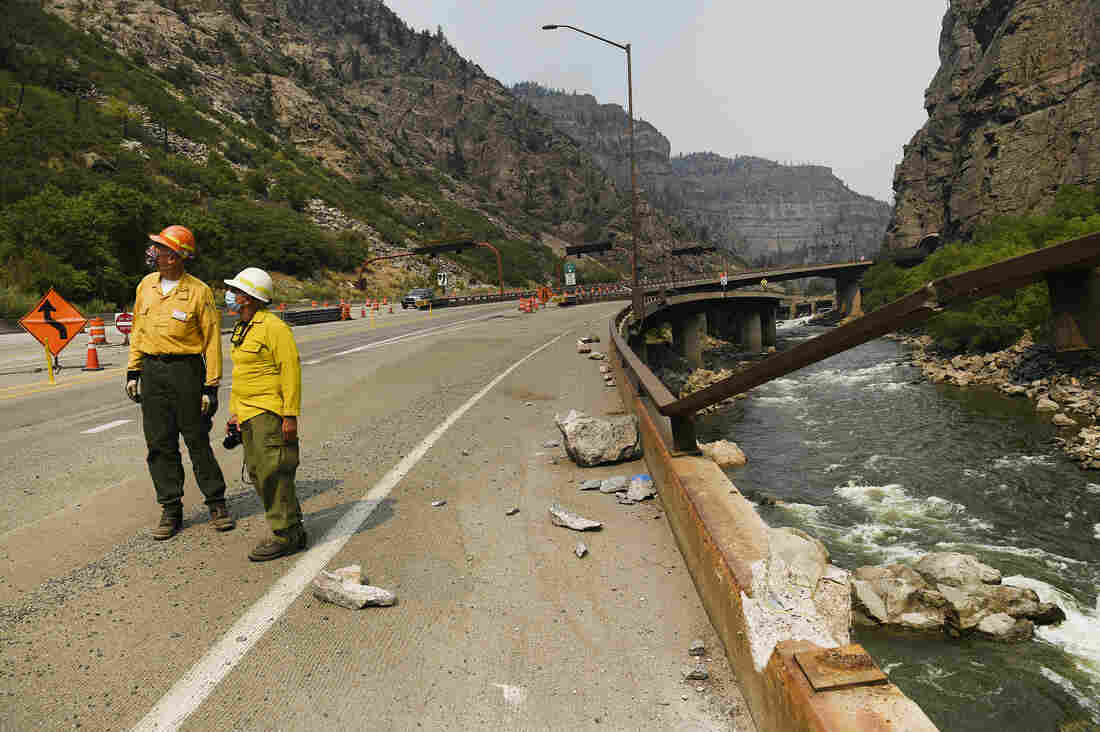 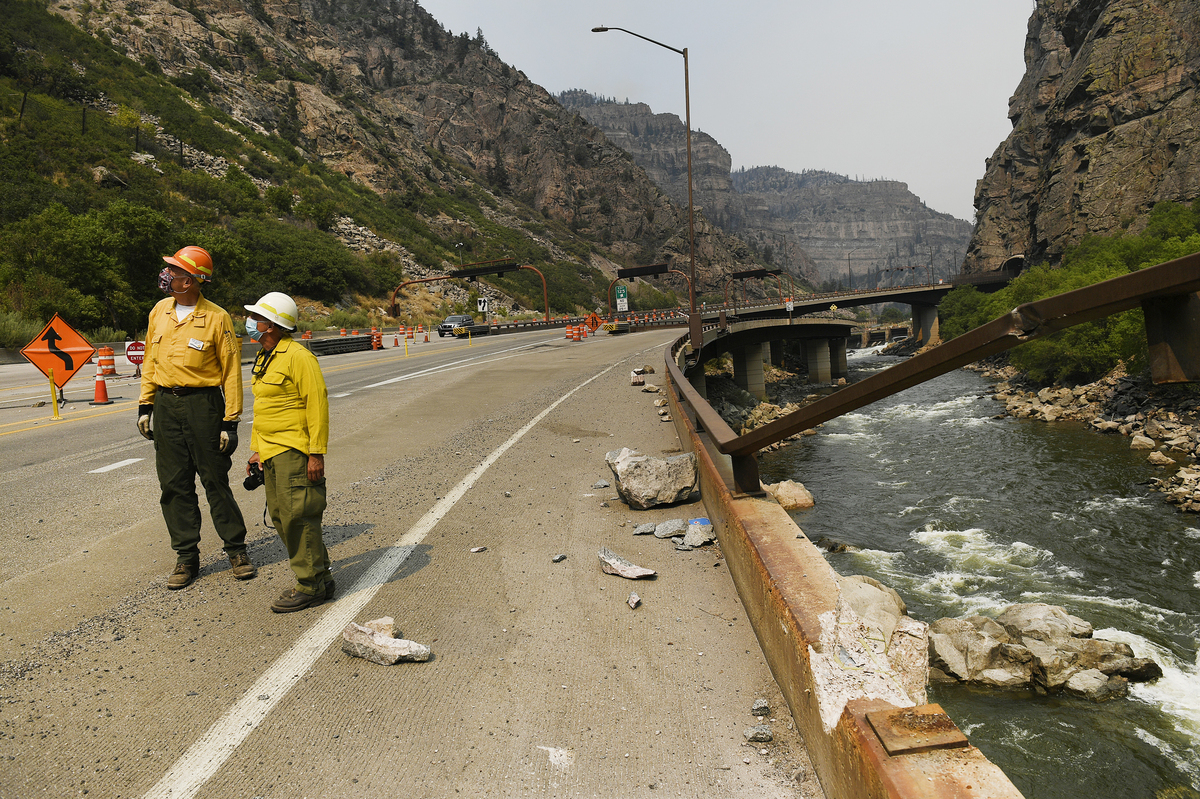 In Glenwood Springs, Colo., the restaurant Masala and Curry was having its best summer ever. Residents of the densely-populated Denver Metro Area eager for a COVID-19 summer staycation flooded the mountains along the critical transportation artery that is Interstate 70. And many stopped in to try the restaurant's Indian cuisine.

That was before Aug. 10, when everything changed. The Grizzly Creek fire exploded, closing Interstate-70 east of town and sending the blaze to the top of the nation's wildfire priority list. Masala and Curry owner Steve Nieslanik says his business dropped by two-thirds, once travelers were cut off from the area by the fire.

The interstate was shut down for two weeks — snarling local travel and causing delays in cross-country commerce. And the newly scorched soil of the canyon, now denuded of stabilizing vegetation, will be far more prone to landslides and flash floods for years. As state and federal agencies assess the long-term damage the fire left through the steep, twisting Glenwood Canyon, the incident provides a stark example of the risk climate change can pose to major national transportation corridors and the communities that depend on them.

"While it's a terrible situation to go through, it is in no way surprising," says Paul Chinowsky, director of the Environmental Design Program at the University of Colorado Boulder.

Chinowsky, one of the authors of the transportation chapter of the most recent National Climate Assessment, says the same elements that make drives like the one through Glenwood Canyon so beautiful also make them heavily dependent on a stable climate.

The towering cliffs, made of striking horizontal rock layers hundreds of millions of years old, are susceptible to tumbling debris. The more severe rain events anticipated for this area as the climate warms raise the risk of these rockfalls, according to Chinowsky. Meanwhile, when rain comes down in short, explosive bursts, less is absorbed by the landscape — exacerbating the increased drought and wildfire risk also expected for the region.

Dangers persist in the aftermath

A Burned Area Emergency Response team from the White River National Forest is assessing what measures could lower the ongoing risk of landslides in the canyon, including possible revegetation.

Meanwhile, a team from the U.S. Geological Survey is finishing efforts to install a new system of rain monitors in the canyon. USGS hydrologist Jason Kean estimates that a landslide could occur even if the area got as little as two-tenths of an inch of rain in 15 minutes. "That's a garden variety storm. That storm could happen several times a year," Kean says. "That's a problem."

The monitor installation is one of several similar efforts USGS is undertaking in Western states struck by large fires this summer. The agency will use the data gathered to create more precise landslide prediction models, which will help weather forecasters and transportation departments gauge imminent landslide risk and issue preventive road closures.

Colorado Sen. Michael Bennet recently toured Glenwood Canyon, along with a large group of other federal, state and local leaders. As Bennet looked at the blackened cliffs around him, he tried to frame the challenge as a national opportunity. The Democrat called for more putting more resources into preventing major wildfires from breaking out and making them easier to fight when they do occur.

"If we do that, I think we're going to create really good jobs across the Rocky Mountain West, especially in rural areas," Bennet said.

However, the country has been slow to repair infrastructure. The American Society of Civil Engineers estimates there is already a $1.2 trillion gap in funding for transportation infrastructure and that's before climate impacts are taken into account.

Coming back from disaster

On a local level, the two-week-long highway closure wreaked havoc on the Glenwood Springs economy during a tourism season already wounded by the pandemic. Mayor Jonathan Godes estimates the local economy lost tens of millions of dollars.

The community has long been accustomed to waiting out occasional closures of the interstate, Godes says. The canyon is so narrow that in many places, it can't even accommodate the width of all four traffic lanes. The design instead uses a massive "bridge deck" built onto the canyon wall to stack long stretches of westbound traffic above the east-bound lanes.

A bad car accident might close the canyon for a couple of hours. With a large rock slide, it can stretch to a couple of days. Anything beyond that and essential services start to deteriorate.

"When that happens, in typical times, the grocery stores get empty," Godes says.

Cut off communities and longer hauls

I-70 isn't the only Colorado highway affected by natural disasters in the last decade. US-24 west of Colorado Springs is still prone to closures, eight years after the Waldo Canyon fire there. In 2013, historic flooding washed out many highways into the mountains along the northern Front Range. And in the spring of 2019, an unprecedented series of avalanches cut off routes across the mountains, while a bomb cyclone stranded some Front Range motorists for hours.

The warming climate is exacerbating these sorts of weather events, scientists say.

Three-quarters of Colorado communities rely solely on the trucking industry for everything from produce to gasoline, according to the Colorado Motor Carriers Association.

I-70 is by far the state's most practical route across the Rocky Mountains, association president Gregory Fulton says. When it's closed, drivers must go over more difficult passes with few passing lanes and parking options for large vehicles. Those complications cost hours and money for trucking companies and interrupt precisely timed supply chains for everyone else — including people well beyond Colorado's borders.

"We tend to forget the importance of this corridor as a national one," Fulton says. "It isn't just us that get affected. It is clearly businesses and consumers throughout the country that get affected when there's any significant closure of this highway."

When they can't use I-70 as an option, truckers on national routes often bypass the state of Colorado entirely — heading instead north to Interstate 80 in Wyoming or south to Interstate 40 in New Mexico.

That detour is likely to become more common in the coming years, as state and federal agencies do the painstaking work of repairing the damage from the Grizzly Creek fire.