Accessibility links
'Freedges' Offer Free Food In Neighborhoods To Those In Need An ad hoc network of activists and anarchists from New York to L.A. are setting up the food refrigerators to help address neighborhoods in need, a problem that's grown more acute during the pandemic. 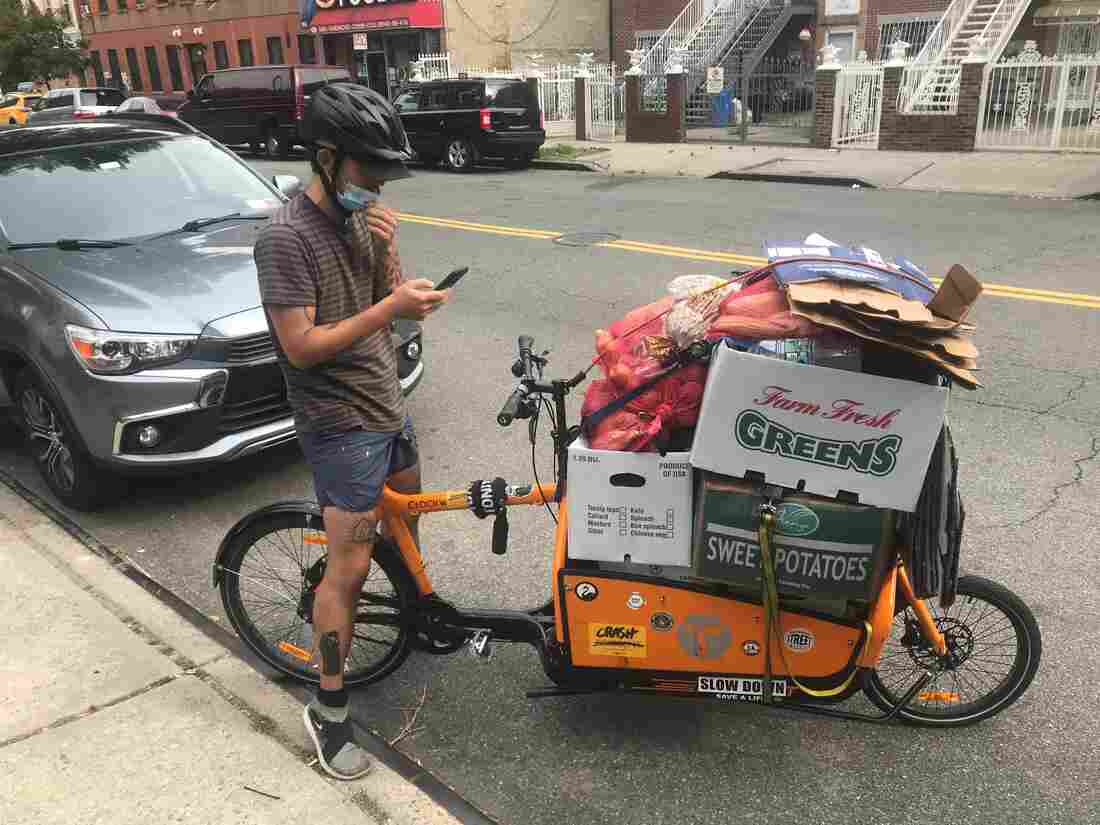 Volunteer Thadeaus Umpster with the anarchist collective In Our Hearts delivering donated produce to community fridges in the Bed Stuy section of Brooklyn. IOHNYC hide caption 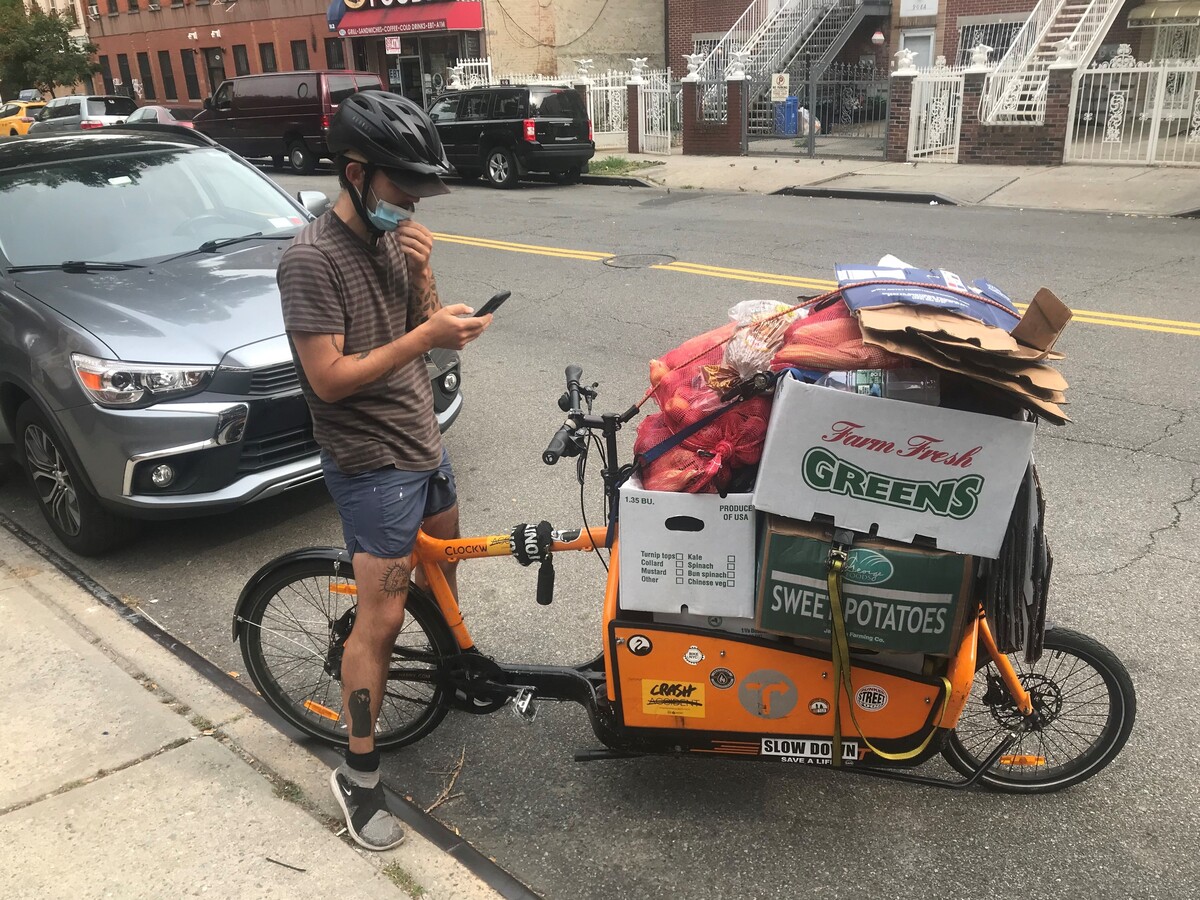 Volunteer Thadeaus Umpster with the anarchist collective In Our Hearts delivering donated produce to community fridges in the Bed Stuy section of Brooklyn.

Marina Vergara has been involved in distributing food to Los Angeles' large homeless population for years through her work with a nonprofit that supports the chronically unhoused.

But this spring, she heard about something new. Free food refrigerators, or "freedges," were springing up all over New York as the deadly pandemic fueled a striking rise in wider food insecurity and hunger. Vergara reached out to the members of the collective who were setting up them up.

"They connected me with a few different people in L.A. who were thinking about doing this," she says. They all agreed, "Let's try it!"

Within a few days, Vergara and her accomplices had a location, a used refrigerator and food donations.

"It was really incredible, we only had one fridge and it was just overflowing with donations, both, you know, fresh and pantry items," she says.

Today, volunteers LA Community Fridges have helped set up at least a dozen across the L.A. area that are helping hundreds of hungry Angelenos get through the week. They're stocked with fresh basics like milk and eggs, veggies and fruit, as well as canned foods.

The ad-hoc, volunteer-led effort has quickly spread — Nashville, Boston and Oakland among others have them, too. On many of the freedges, the honor system rules are posted in bright colors: take what you need, leave what you don't.

So far, local health departments and inspectors have, with a few exceptions, largely looked the other way. Ernst Oehninger, an economist and community organizer, helped get some of the first Freedges off the ground in the Davis, Calif., area. He says in the past the fear of legal liability or a code infraction often proved major deterrents for aspiring freedge organizers. He's heartened this pandemic-fueled movement doesn't seem burdened by that.

"The majority of the freedges popping up now don't seem to have these concerns," Oehninger says. "We think this is great, as food codes are not made for community fridges and everything we do is only possible because of loopholes. We think people should start their community fridge then deal with health authorities later, if there is a complaint."

For Vergara, the speed and growing support for this grassroots movement offers her a glimmer of optimism in an otherwise dark year.

"It's incredible how fast this is all happened. I mean, I can't even explain how much hope this gives me," she says. "You know it's really nice to know that we're here for one another." 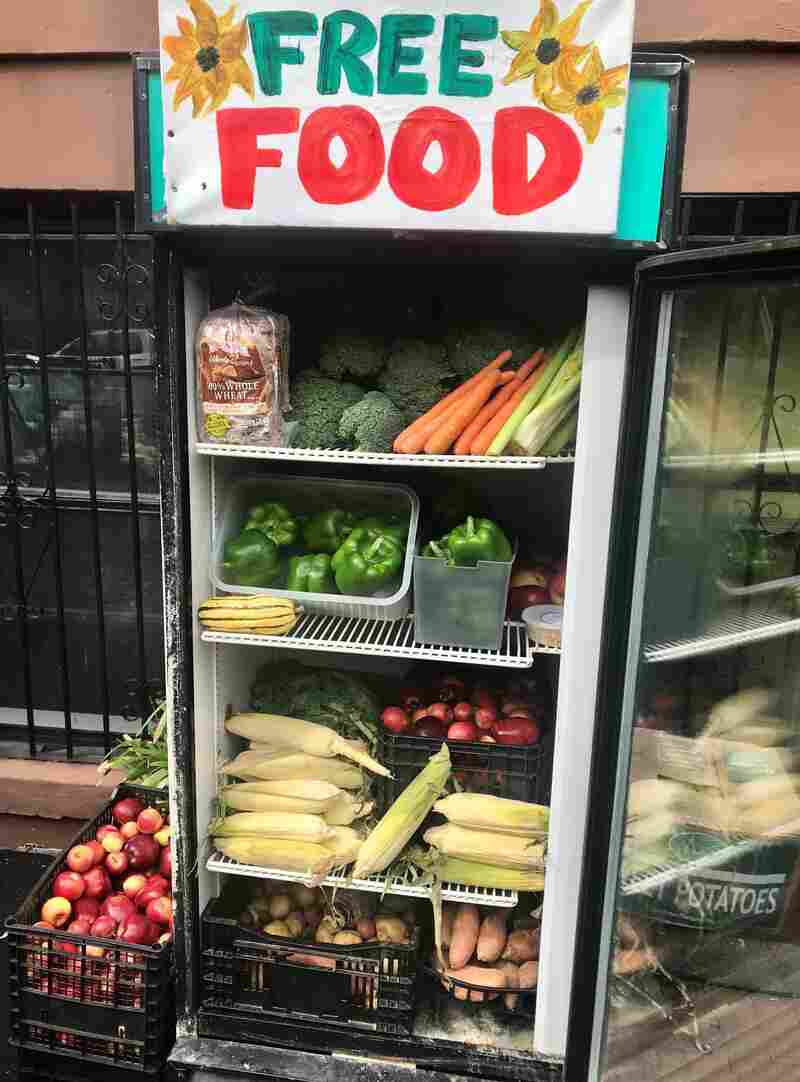 A free food refrigerator in New York City organized by volunteers with the volunteer collective A New World In Our Hearts. /IOHNYC hide caption 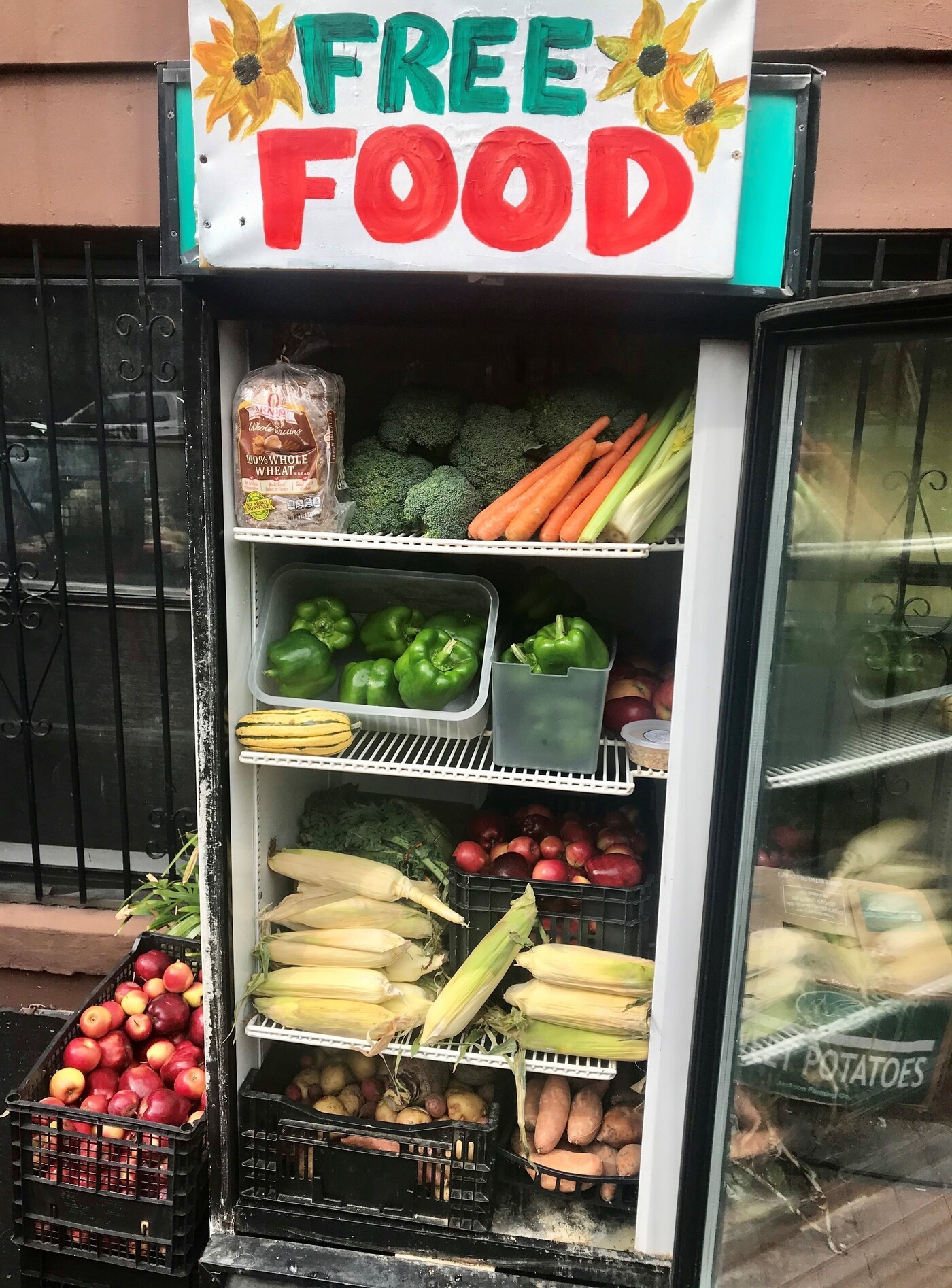 A free food refrigerator in New York City organized by volunteers with the volunteer collective A New World In Our Hearts.

The number of Americans struggling to get enough to eat has grown dramatically during the pandemic. Food banks are struggling to keep up with a surging 60% increase in demand, according to the nation's largest network of member food banks Feeding America. Also telling, more than 40 percent of those people are seeking food aid for the very first time, according to the group's August survey.

Thadeaus Umpster, a self-described anarchist with the collective called A New World In Our Hearts, helped set up New York City's first Freedge in February right before the pandemic sucker punched the five boroughs. Today there are about 60 of free food fridges across greater New York and northern New Jersey.

Umpster says the people using these modern day bread lines aren't necessarily the folks you'd expect would be in need.

"A lot of them are people who, prior to the pandemic, had good jobs and didn't have to worry about stuff like that," Umpster says. "And people from other places that don't qualify for unemployment. Now they've been relying on the fridges to help them sustain themselves."

When I reached him, Umpster had just finished transporting a pallet full of donated food, one perilously heavy load at a time stacked high on his three-wheel cargo bike. He was taking donated produce to outdoor, free food refrigerators in the Bed-Stuy section of Brooklyn where he lives.

"About 15 cases of food. mostly sweet potatoes, lots of apples, some corn, some broccoli. I did, like, four trips."

Umpster and other organizers with collectives say that beyond trying to address food insecurity and food waste, the effort has brought people together in unexpected ways.

"The community is like getting a lot stronger, people are really pitching in and meeting their neighbors and taking care of the block, wherever the fridge is, in a way that maybe people hadn't before," he says. 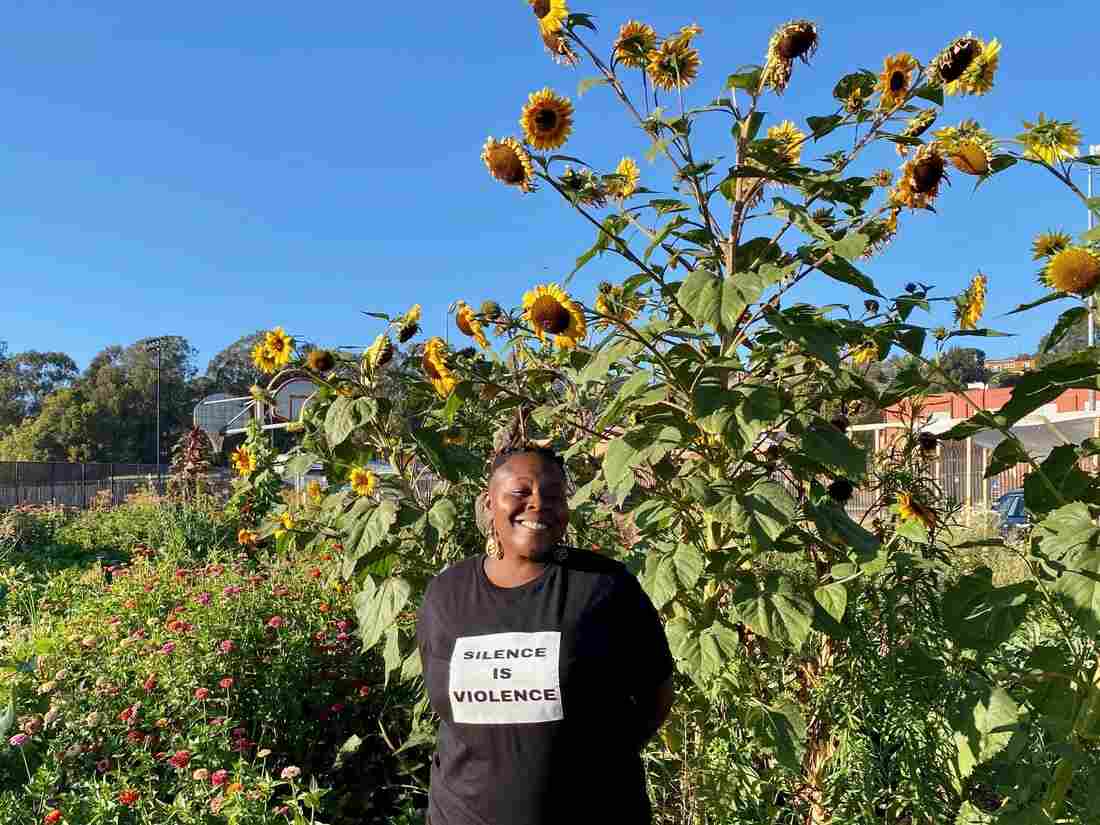 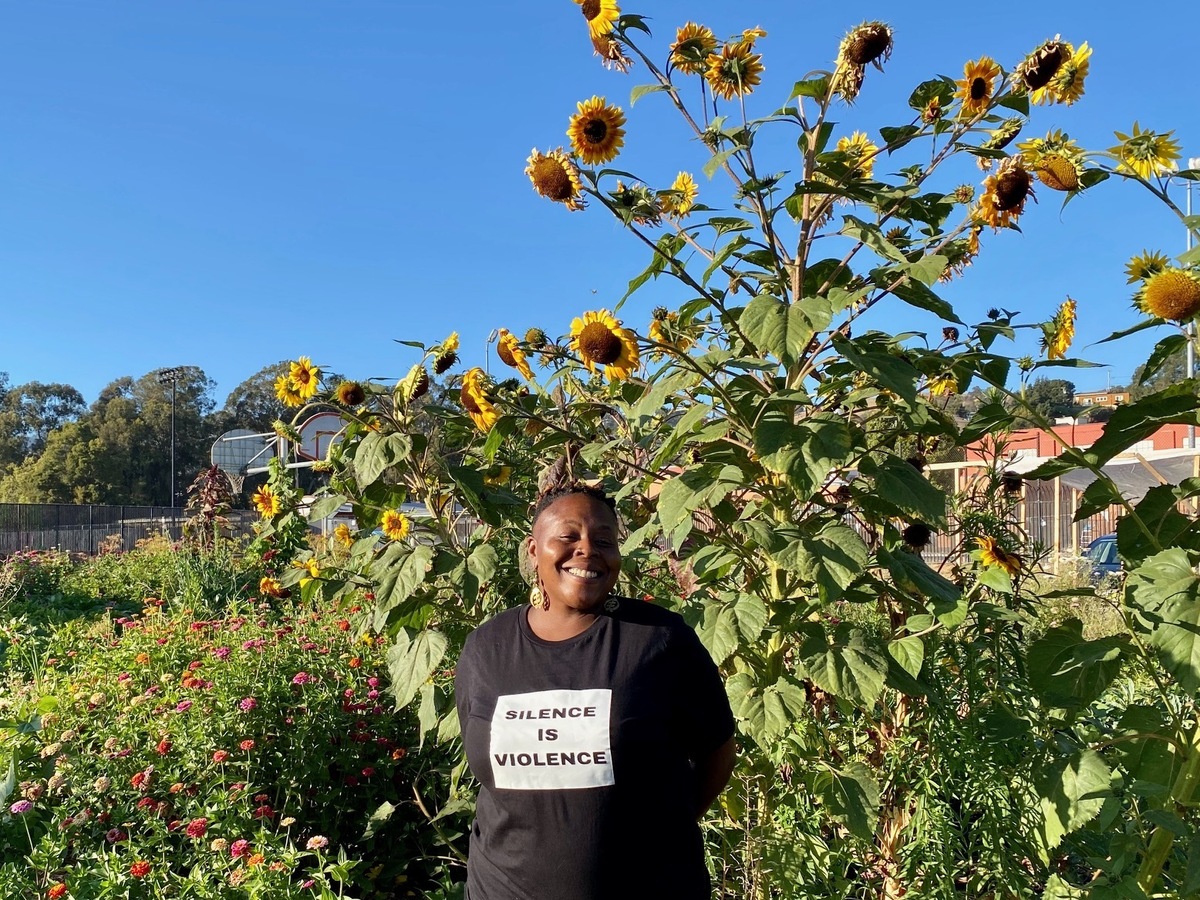 Brandi Mack, a community organizer and food security activist, at the urban farm she helped create at Castlemont High School in Oakland, Calif. She hopes the Freedge movement proves sustainable.

But is it sustainable?

Some long involved in battling food insecurity wonder if this pop-up effort, flourishing during the pandemic, will have legs. Are the folks running them in it for long-haul or connected deeply enough to the local community?

"I think that all of these community fridges or food pantries are all kind of like patches," says Oehninger, the long-time food activist and organizer. "You're patching a system, but you're not really changing the system. That criticism is valid," he says.

He urges organizers to link the fridges to local efforts such as community gardens, urban farm initiatives, seed libraries, community kitchens, and pop up kitchens. "You need to have a team. A fridge is not going to solve a systemic problem." They have have to be connected to other organizations, he says, "or you have to make them."

"As we watch this whole United States crumble, we cannot keep employing the savior model," says Brandi Mack, a longtime community organizer and food security activist in Oakland. "It's yet another Band-Aid."

Several "freedges" have sprung up in Oakland as well.

On one level, Mack says she welcomes the make-it-happen innovation of plugging in a fridge and getting the Instagram generation involved. She spearheaded efforts to create one of Oakland's first "freedges" several years ago with a group that's been at the effort for years. But Mack put the fridge inside Castlemont, a high poverty high school in East Oakland that's 94% Latinx and African American. And she stocked it with fresh fruit as well as some veggies grown on site.

"I was excited when I heard more people were doing it because they thought I was nuts when I said 'we're going to have a fridge in the hallway at the school and the kids can go get what they want, when they want it, because the issue is they're hungry,' "Mack recalls.

Mack connected the fridge to an on-going program. She and supporters thought through distribution and mapped the local food eco-system She and others turned old basketball court into a thriving, working farm. Today it's part of the school's Sustainable Urban Design Academy which teaches young people how to cultivate, process and distribute healthy food in the area.

"Over there, there are peppers in the bed, Just a plethora of food!" she says as she shows me around the farm behind Castlemont.

Mack also worries these pandemic fridges, in contrast, could turn out to be fleeting, feel-good footnotes to a deadly virus.

"I will urge for folks who are, you know, excited to offer a distribution model to really think about the sustainability of it, that we no longer can do 'Superman' designs helping communities that have been traumatized," she says.

Map out the local food systems and build a distribution network that will outlast the pandemic, Mack says, noting hunger will still be a scourge long after the virus isn't.