Accessibility links
Election Misinformation Comes From Inside And Outside U.S. National security officials say Russia is again trying to disrupt the election. But this time, it doesn't have to work so hard because Americans are spreading mistruths and doubts about the election. 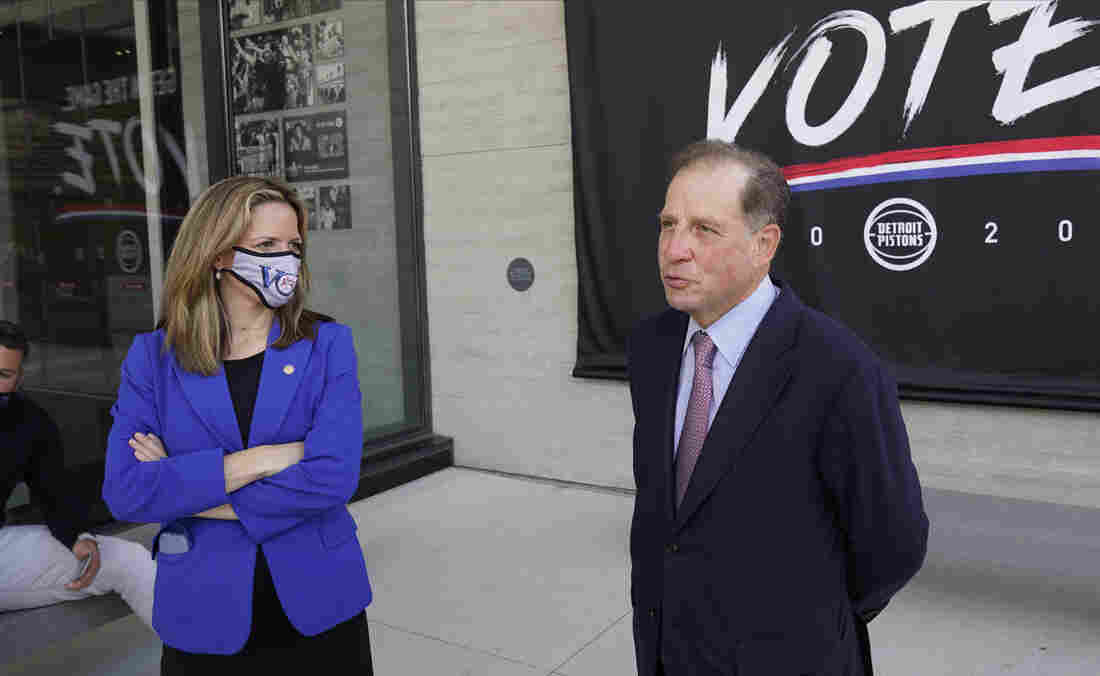 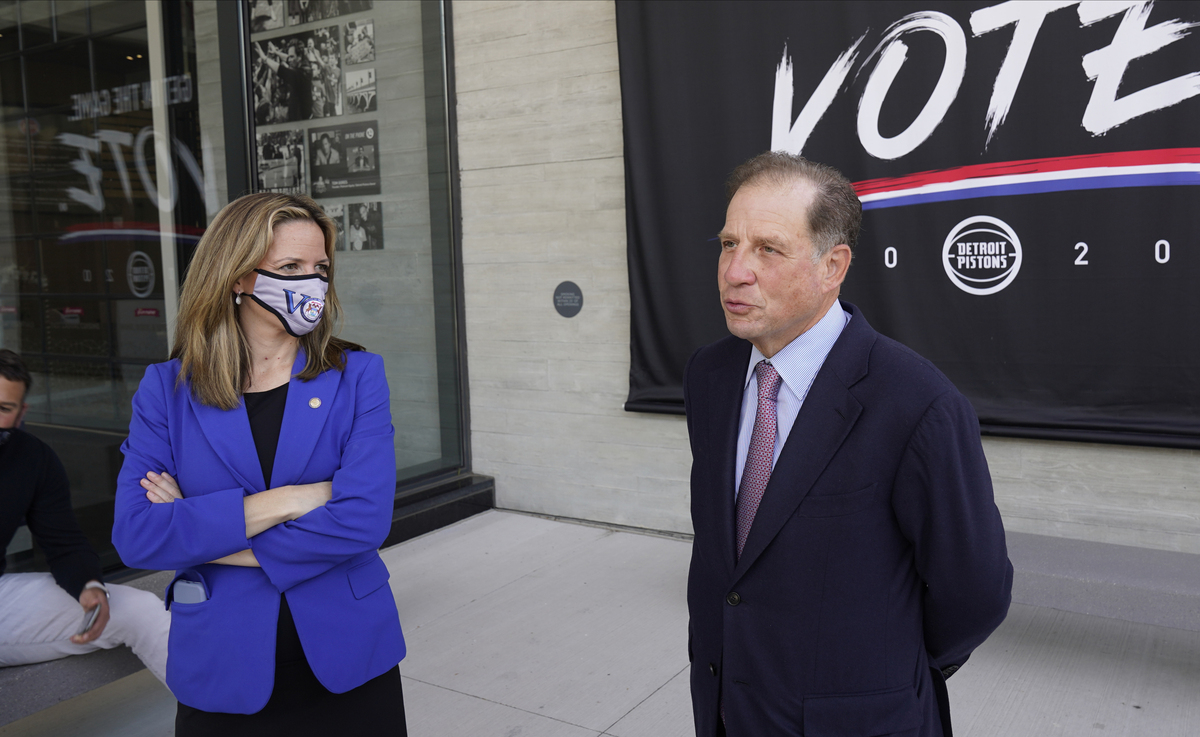 Michigan Secretary of State Jocelyn Benson (left) and Detroit Pistons Vice Chairman Arn Tellem talk about voting last Thursday, when balloting began in the state. The Pistons are allowing their arena to be used as a polling station.

National security officials say the Kremlin is at it again: Just like in 2016, Russia is using social media to try to undermine the U.S. presidential election, only with even more sophisticated tools.

But this time around, Russia may not have to try so hard. Social media companies and outside experts say in 2020, the biggest threats to the election may be coming from Americans in the form of possible violence, mistruths about mail-in balloting, and misinformation in the wake of possibly delayed election results — not to mention a president who has repeatedly questioned the legitimacy of the vote.

"In some ways, the people who know the most about how to mislead Americans are other Americans," said Yoel Roth, Twitter's head of site integrity.

Q. Where are the biggest foreign threats coming from?

Greg Myre: National security officials and analysts who study this are absolutely clear: Russia is the main foreign threat, and by a long shot. China and Iran are also trying to influence the election but at a much lower level.

The Russians have been attempting to interfere for many years, and their approach keeps evolving. Last time, they hacked into Democratic Party emails and also used automated fake accounts on social media, said Nina Jankowicz, of the Wilson Center and the author of How to Lose the Information War: Russia, Fake News, and the Future of Conflict.

"Russia has pivoted to information laundering, that is planting a narrative with an influential individual who can then amplify that narrative," she said.

In one instance, the Russians created a phony website and paid freelance American journalists to write stories. The Americans didn't know who they were working for. But this was small stuff. There's no evidence so far of a foreign campaign gaining major traction.

The U.S. intelligence community is much better prepared for this election, said Thomas Rid, author of the new book Active Measures: The Secret History of Disinformation and Political Warfare. The CIA and the National Security Agency can legally monitor and take action against a foreign group or individual spreading disinformation. But in the U.S., free speech protections normally prevent that kind of action.

"For some agencies, like the CIA, it's illegal to operate domestically. And for the FBI, it is politically a very hot potato, a very problematic thing to be countering domestic disinformation because it is so political," said Rid.

Q. What are the biggest concerns at this point about domestic disinformation?

Shannon Bond: Security experts are warning that the atmosphere is ripe for disinformation, and there are a lot of false claims and rumors already circulating.

That includes "everything from Qanon [a baseless conspiracy theory] to mobilizations to protest, COVID-19 conspiracies and then ultimately mail-in ballots and voter fraud," said Clint Watts, a former FBI special agent who tracks online security threats at the Foreign Policy Research Institute.

Researchers and social media platforms say bad actors are capitalizing on the uncertainty created by the pandemic to confuse people about how to vote, undermine confidence in the election results and even threaten violence.

In some cases, they say, would-be foreign meddlers need only amplify falsehoods being spread by U.S. social media users.

"Russia doesn't have to make fake news. They just repeat what conspiracies are coming out of the White House and the administration," Watts said.

Election watchers are particularly concerned about efforts to undermine confidence in voting — as President Trump has done repeatedly, with his tweets and Facebook posts claiming, falsely, that mail-in ballots are vulnerable to fraud.

Q. What are the social companies doing?

Bond: Facebook and Twitter have both tightened rules against voting misinformation, casting doubt on the election results and premature claims of victory before results are final.

In Twitter's case, Roth said its most recent changes were "specifically in recognition of some of the recent threats that we've seen emerge around attempts to undermine public confidence in voting techniques like voting by mail."

The companies meet monthly, along with government and law enforcement agencies, to discuss threats and their responses. Facebook and Twitter both say they are prepared to take measures to crack down on content that presents a threat of real-world harm, like violence or voter suppression.

Twitter frequently applies fact-checking labels to President Trump's posts about voting, and Facebook has begun to do the same. That has given fodder to Republican critics of the companies, however, who have long claimed, without clear evidence, that tech platforms are biased against conservatives.

But even as the social media giants are to be taking the threat of disinformation — and especially foreign influence — more seriously than they did four years ago, critics say they are still too slow. In many cases, posts that break the rules are labeled or removed only after they have spread widely.

Critics say it's not just about whether the platforms set the right rules — it's about how they enforce those rules.

This week, former Vice President Joe Biden's campaign condemned Facebook for not removing Trump's false claims about voting. "By now Mr. Trump clearly understands that Facebook will not hold him to their clearly stated policies," the campaign wrote in a letter to Facebook obtained by Axios.

A Facebook spokesman says the company applies its rules "impartially."

Q. President Trump is repeatedly questioning the legitimacy of the election. How is this shaping the wider discussion?

"On the one hand, we see these stark warnings coming from the U.S. intelligence agencies. And on the other hand, President Trump is joking about fake news with [Russian leader] Vladimir Putin," she said.

Trump has declared repeatedly at campaign events that widespread mail-in balloting will lead to "the most corrupt election in the history of our country."

In contrast, FBI Director Christopher Wray, along with many other national security and election officials, are offering assurances that election systems have been hardened and that it will be extremely difficult to tamper with actual votes, in-person or by mail.

Q. What do the platforms say they are looking out for in the coming weeks?

Bond: Facebook and Twitter are sounding the alarm over potential "hack and leak" operations like we saw in 2016. Just last week, the companies took down accounts connected to Kremlin-backed actors they said were involved in the leak of hacked emails from the Democratic National Committee and Hillary Clinton's campaign four years ago.

The risk of disinformation and manipulation does not end on Election Day. The big question is: What will the platforms do to stop bad information from spreading in an information vacuum, if it takes days or even weeks for final election results?

"This is probably going to take a little bit longer to do the counting because of the increase in absentee ballots," Christopher Krebs, director of the U.S. Cybersecurity and Infrastructure Security Agency, said recently. "Have a little bit of patience."