Accessibility links
Amy Coney Barrett's Catholicism Is Controversial But May Not Be Confirmation Issue Democrats are unhappy over Barrett's nomination and object to her conservative legal views, but they are unlikely to question her Catholic beliefs.

Listen · 3:58 3:58
Amy Coney Barrett's Catholicism Is Controversial But May Not Be Confirmation Issue 3:58 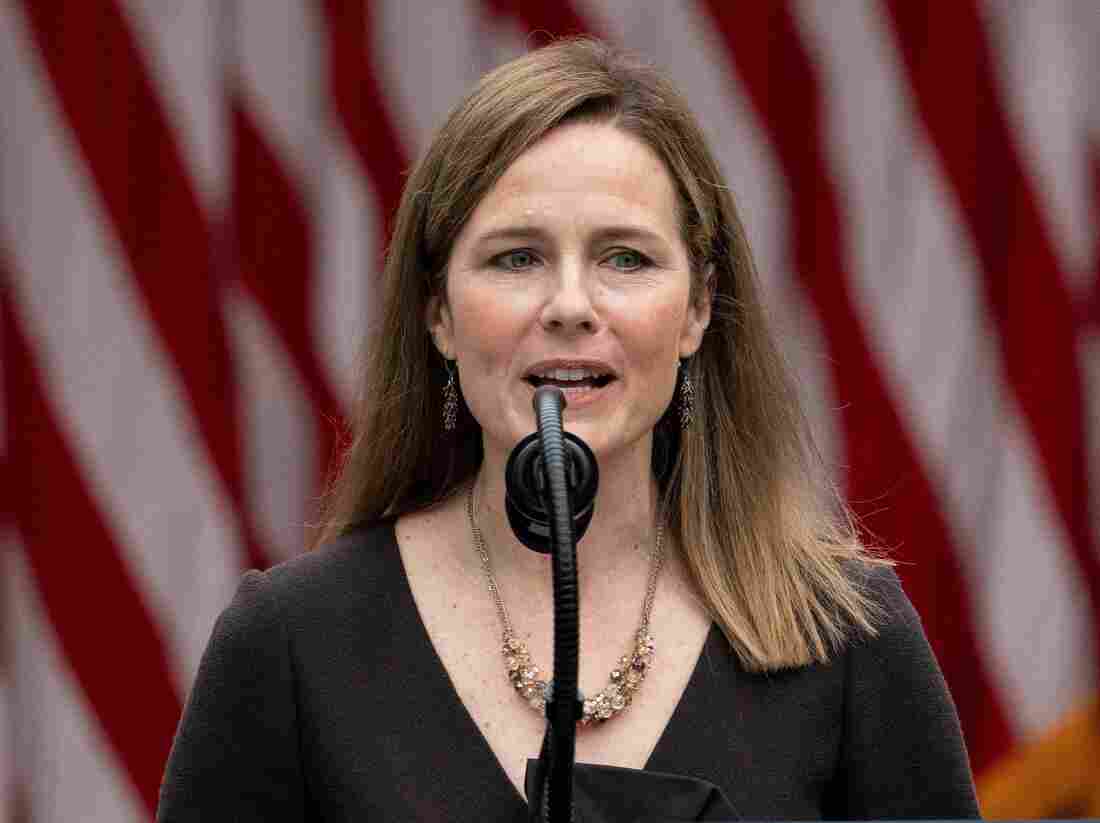 Judge Amy Coney Barrett speaks after President Donald Trump announced her as his nominee to the Supreme Court, in the Rose Garden at the White House on Sept. 26. Alex Brandon/AP hide caption 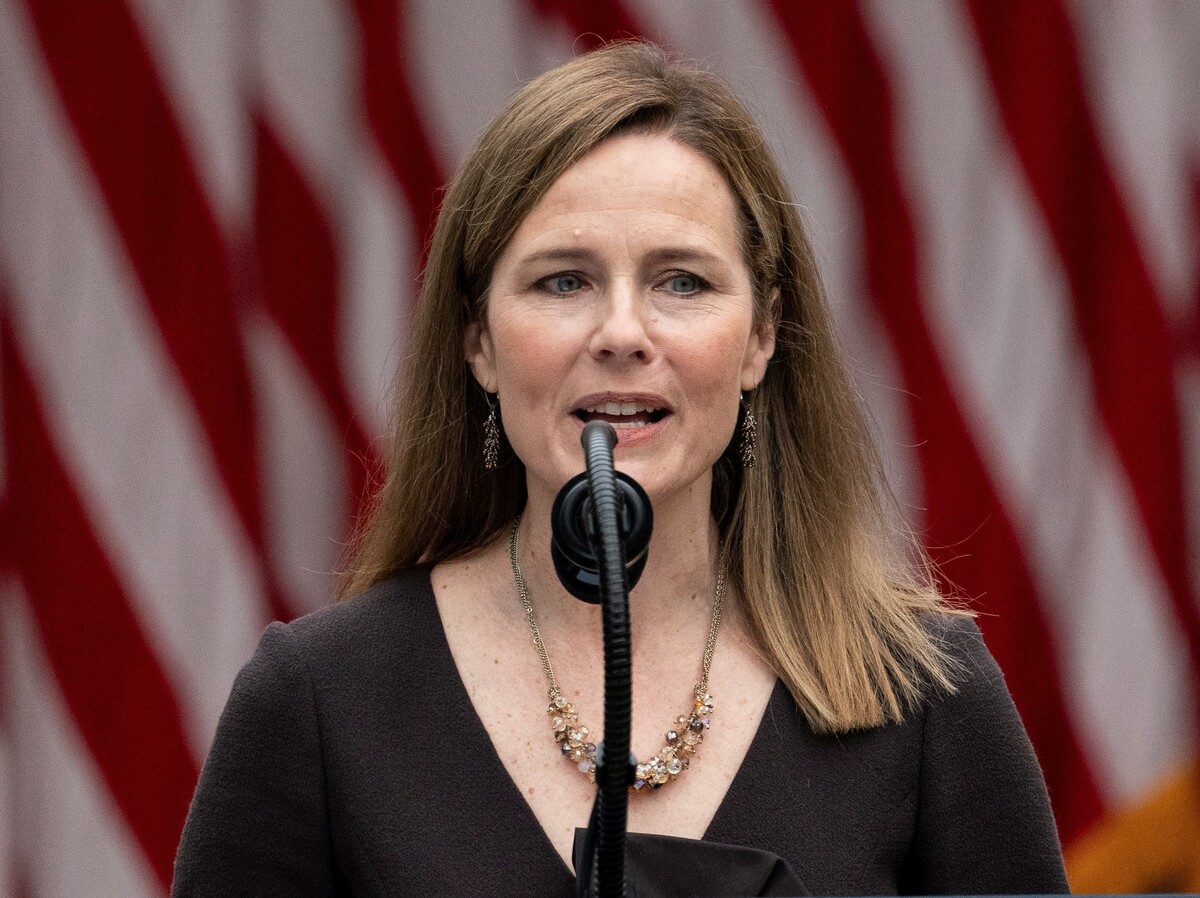 Judge Amy Coney Barrett speaks after President Donald Trump announced her as his nominee to the Supreme Court, in the Rose Garden at the White House on Sept. 26.

If Amy Coney Barrett is confirmed as the new Supreme Court justice, she will be one of six Catholics on the bench. She would be joined by an Episcopalian who was raised as a Catholic. and two Jewish justices.

Never before has the Court been so dominated by one religious denomination, a fact that could conceivably be raised during Barrett's confirmation hearing before the Senate Judiciary Committee, scheduled to begin on Oct. 12.

"It's legitimate for senators to be concerned about whether the court is reflecting the diversity of faith in the United States," says Marci Hamilton, an expert on religion and law at the University of Pennsylvania.

Whether such a concern will be discussed, however, is another matter entirely.

Not all Catholic justices think alike. Sonia Sotomayor and Clarence Thomas, both Catholic, are ideological opposites. A strict adherence to Catholic teaching may lead a justice in contrasting directions, from opposing abortion and same sex marriage, to advocating for immigrants and expanded health care, or to opposing the death penalty.

"Catholics tend to pick and choose which parts of Catholic teaching have an impact on their political views," says Thomas Reese, S.J., a Jesuit priest and senior analyst for the Religion News Service.

The Catholicism of Sotomayor or Thomas, or that of Antonin Scalia, John Roberts, Samuel Alito, or Brent Kavanaugh, barely came up in their confirmation hearings.

If Amy Coney Barrett's religious beliefs were to be raised during her confirmation hearings, it would presumably be because her Catholic faith appears to be of unusual intensity and character.

In 2006, Barrett told graduates of the Notre Dame Law School, which she had attended and where she was teaching, that they should see their upcoming legal careers "as but a means to an end ... and that end is building the Kingdom of God."

Barrett later spoke several times at the Blackstone Legal Fellowship, a conservative training program for Christian lawyers run by an organization that opposes same sex marriage and LGBTQ rights. According to a report in the Washington Post, the training program was established to promote a "distinctly Christian worldview in every area of law."

Barrett's religious beliefs did receive considerable attention in 2017 when she was nominated to be a federal judge on the 7th Circuit Court, the position she currently holds.

"The dogma lives loudly within you," Democratic Sen. Dianne Feinstein told Barrett at her confirmation hearing. Republican Sen. Charles Grassley, then the Judiciary Committee chairman, asked Barrett when it might be proper for a judge to put their religious views above an application of the law.

"Never," Barrett replied. "It's never appropriate for a judge to impose that judge's personal convictions, whether they derive from faith or anywhere else on the law."

In comments on Saturday following President Trump's announcement of her nomination to serve on the Supreme Court, Barrett said she subscribed to the legal views of Justice Scalia, for whom she clerked. "A judge must apply the law as written," she said.

In fact, several of the more controversial positions Barrett has taken as a law professor and federal judge – on gun rights, immigration, and health care – can hardly be attributed to her Catholicism.

Thomas Reese, the Jesuit commentator, says he is not concerned whether candidates for the Supreme Court are Catholic or not.

"We know what their legal reasoning is, what positions they have taken, or what their writings are," Reese says. "Religion becomes a totally irrelevant issue in terms of judging whether they will be the kind of jurist we want."

Moreover, other justices have highlighted their faith without provoking controversy. Ruth Bader Ginsburg once said she hoped her service on the Court would honor the Jewish admonition to demand justice, and she kept a verse from the Book of Deuteronomy on the wall of her chamber.

Marci Hamilton, currently a senior fellow in the Program for Research on Religion at the University of Pennsylvania, says candidates to serve on the Court should nevertheless be prepared to answer questions about how their religious beliefs would influence their judicial decisions.

"It is of course appropriate for all justices to consult their beliefs and their morals as they are working on cases," Hamilton says, "but they are required to be driven by the law. If it is impossible for them to follow what the law requires and instead provide their own religious template on the law, that's inappropriate."

The possible impact of Barrett's Catholicism on her jurisprudence has continued to be a subject of speculation in part because of her reported membership in a conservative Catholic "covenant" community known as People of Praise. The organization, which also includes some non-Catholics, holds to highly traditional social views and has been subject to critical reviews in progressive circles.

Members of the group are "a different kind of Catholic," says Massimo Faggioli, a theology professor at Villianova University who has studied similar Catholic movements. "[Their] Catholic culture is very particular and [their] loyalty to the law goes together with a lifelong commitment to leaders and other members of the group."

Barrett has not discussed her connection to People of Praise, although her supporters insist it is irrelevant to her responsibility as a judge.

One key question is what view Barrett would take in cases involving the Establishment Clause of the First Amendment, which says the U.S. Congress can pass no law "respecting an establishment of religion." The clause has been the foundation of arguments that church and state must be separate, but such views have been repeatedly challenged under the Trump Administration and by recent Supreme Court decisions.

"In American public discourse, perhaps no concept is more misunderstood than the notion of separation of church and state," Attorney General William Barr argued this month at the National Catholic Prayer Breakfast. "Militant secularists have long seized on that slogan as a facile justification for attempting to drive religion from the public square," Barr said, "and to exclude religious people from bringing a religious perspective to bear on conversations about the common good."

The People of Praise group to which Barrett belongs promotes a similarly skeptical view of secularism as a philosophy.

"You already have at least five members of the Supreme Court that have no respect for the separation of church and state," says Marci Hamilton. "I would assume that Judge Barrett will fall into that camp."

If Barrett's views on the Establishment Clause gets attention during her upcoming confirmation hearings, however, it is unlikely to be in the context of any discussion of her faith. Democrats were pilloried for raising questions about Barrett's religious beliefs three years ago. With Catholics seen as a key voter group in the upcoming election, there is little appetite on the Democratic side for making Barrett's Catholicism an issue once again.

In his statement on Trump's nomination of Barrett, Joe Biden, himself a Catholic, avoided any mention of Barrett's faith, criticizing instead her disagreement with the Supreme Court's decision to uphold the Affordable Care Act. House Speaker Nancy Pelosi, also a Catholic, took a similar approach this past Sunday when asked on the CNN program State of the Union whether Democrats should probe Barrett's faith views.