Accessibility links
Tank And The Bangas' New Song, 'Feelings,' Is A COVID-Era Slow Jam The New Orleans band says its new song, "Feelings," came out of a need to process the overwhelming input of the pandemic and Black Lives Matter protests unfolding all at once. 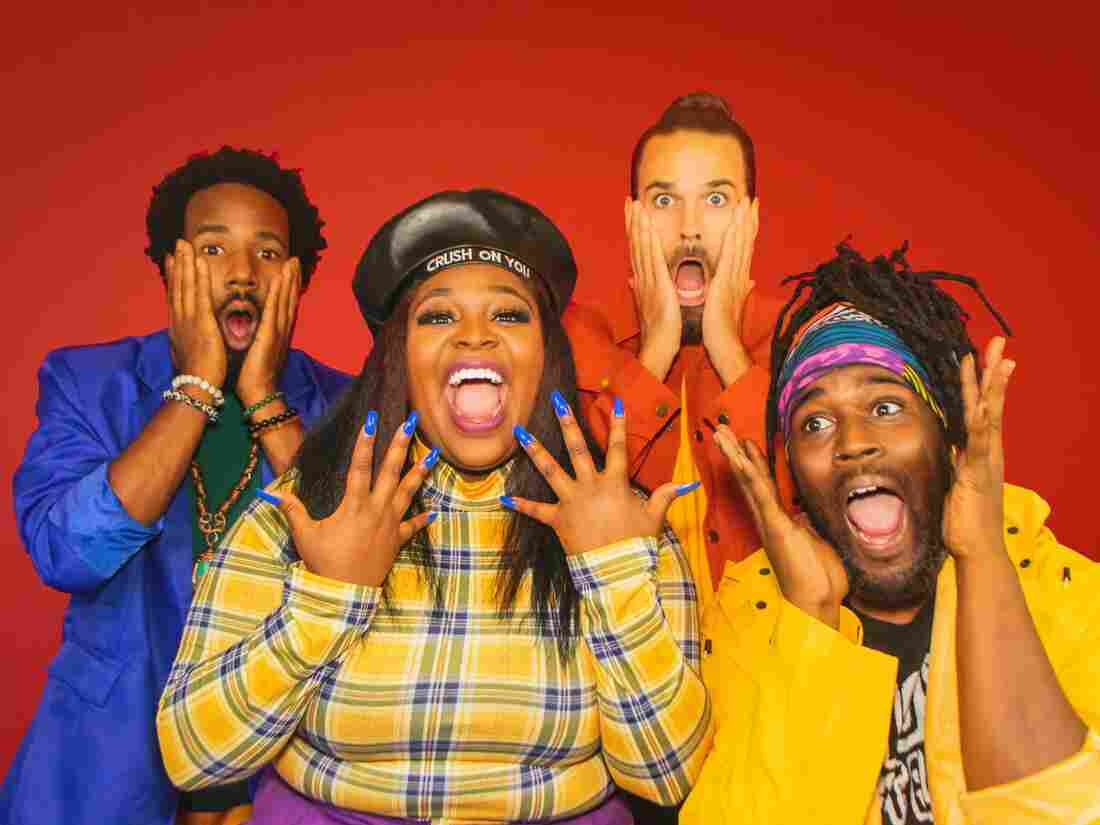 From left: Norman Spence, Tarriona "Tank" Ball, Albert Allenback and Joshua Johnson are the New Orleans band Tank and the Bangas. Their new track for Morning Edition's Song Project was inspired by a collective feeling of restlessness in the COVID-19 era. Jamelle Tate/Courtesy of the artist hide caption 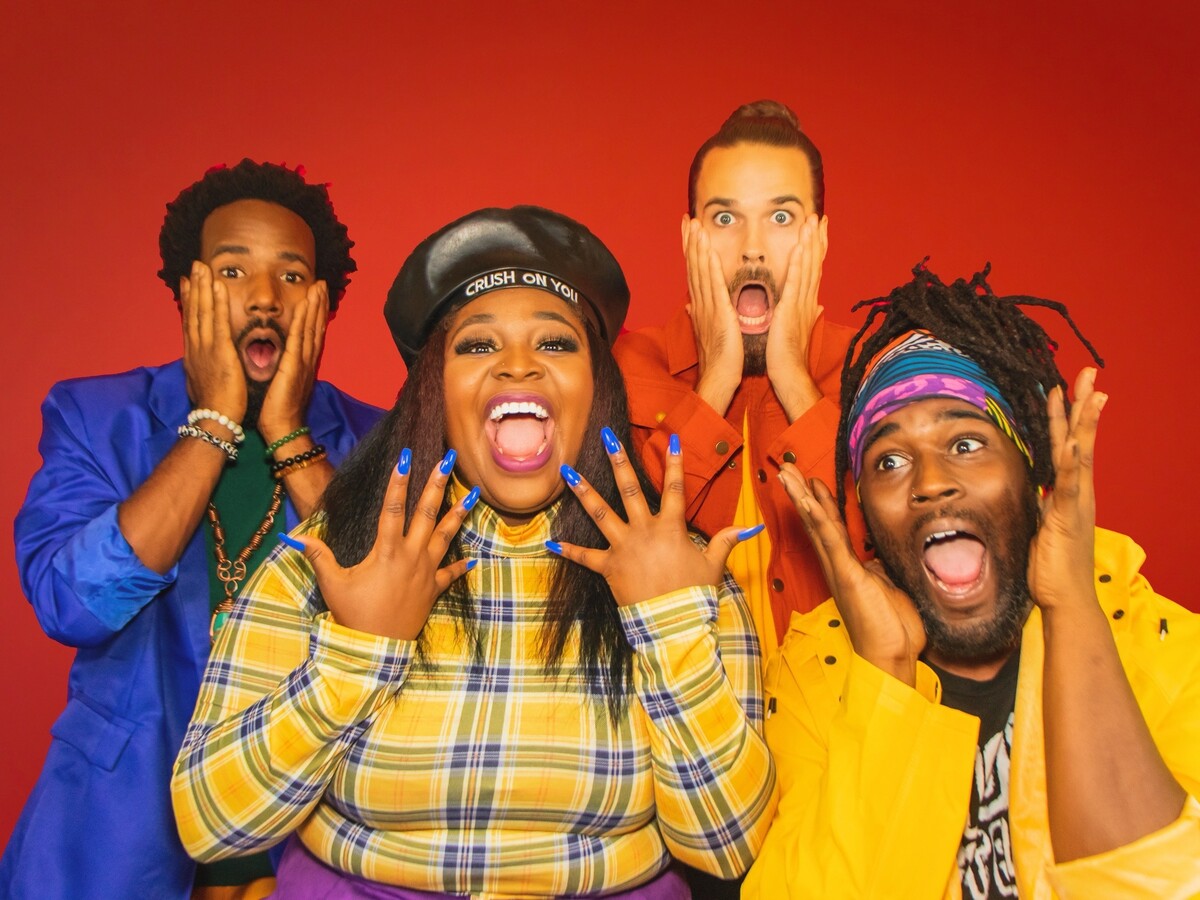 From left: Norman Spence, Tarriona "Tank" Ball, Albert Allenback and Joshua Johnson are the New Orleans band Tank and the Bangas. Their new track for Morning Edition's Song Project was inspired by a collective feeling of restlessness in the COVID-19 era.

Jamelle Tate/Courtesy of the artist

The Morning Edition Song Project, in which musicians compose an original song about the COVID-19 era, returns this week with New Orleans group Tank and the Bangas. When NPR first approached the band over the summer, the pandemic and the George Floyd protests were dominating the news. Asked to compose some music that put her feelings about the words into words, singer Tarriona "Tank" Ball responded with a song simply called "Feelings."

David Greene spoke with Ball and her bandmate Norman Spence earlier this month, as a hurricane was pounding much of the Gulf Coast, about writing a song in the shadow of death and unrest, including one loss that hits close to home. Hear their conversation at the audio link, and read on for an edited transcript.

David Greene: Was this one of those songs that you really labored over to come up with the right words, or did they just kind of spill out?

Tarriona "Tank" Ball: It actually was a mix of both. Because after talking with you guys so much, it really made me kind of dig deep on it: You know, what am I feeling? What is going on? So I sat in the back room in New Orleans on Frenchmen Street with Norman, with his guitar. While he was playing, it made me start saying, "I've got feelings." And I said, since I don't even know exactly what's really going on inside of me all the way, and I know a lot of people probably feel this way as well, you just got feelings. You don't really know how to express all of them, but you got some feelings. I just wanted to really talk about that.

You lost two people in your own circle to COVID-19, young friends of friends. And I gather the death of Ellis Marsalis, the great New Orleans jazz player, also hit pretty hard.

Ball: In New Orleans, we really like to almost celebrate death after we mourn — you know, we put the casket in the air, especially when it's somebody that's really influential in the city. And when he died, he didn't get the casket in the air, he didn't get the horns and the dancing in the street. The city couldn't celebrate him; we had to mourn in quiet. And that's not even like us.

Norman, what part of what Tank is saying relates most closely to you and what you've been through?

Norman Spence: Just being home and being kind of stuck there — especially as a father, you know, it's hurting the kids a lot. I'll say that. [But] I think we've been looking at more of the blessings than what's wrong with it.

What's a blessing that you feel has emerged?

Spence: I get to spend time with my kids — instead of touring and you know, playing music for everybody all the time.

There's a line in the song I want to ask about: Tank, you say, "This cycle feels like Sunday religion / It's all tradition / Even the division." What do you mean by that?

Ball: You know, Sunday! Every Sunday, everybody, at least growing up in my house, it's time to go to church, you know? Religion is something that constantly comes around and it's all tradition — and everybody know what tradition is, it's something passed down from generations in your family. And that's what I feel like hate is, [too].

It sounds like you're saying that you see killings and you see protests and we just go through this tradition time and time again.

Ball: Yeah. It's going to get old next week, when everybody's feed doesn't look like it looked a month ago, with the hashtags. ... I don't want this to be over when it's not popular anymore. It's so funny because true pioneers back in the day, they'd really fall for things and stay with it until the day they died or they was killed. But today, we're tired after protesting for a week.

Spence: But that's the media. They get to paint these narratives and then the next one that pops up, we forget about the last one. You get caught up in that. It's best to turn it off sometimes.

Everything you're saying makes sense, but it's also two different things — what you're saying, Norman, like you've got to turn it off sometimes, but also, Tank, what you're saying, you don't want to go out and protest for a week and then just shut it down. How do you resolve those? Where is the right balance?

Ball: I don't know how to change the heart of America. Especially when it was built and founded on so many terrible and horrible things that have been done to people. But I can try, with songs and poems and conversations with those that I care about and love that's in my circle. That could effect even the little bittiest amount of change.

You rap in the song that you're still waiting for your 40 acres and a mule.

Are you both optimistic that there will be a time when you can look at our country and say, OK, we've somehow come to a place where we've addressed racial divisions in a real way?

Spence: Yes, there is hope.

Ball: I think there is hope, simply because things are changing in front of us every single day. I know I personally see that. You know, these questions are so broad — how do we change it, what do we do? There's a million answers, but I literally probably have about one or two. And that's that the true change can really start within. And then your change can really begin to affect other people, hopefully and purposefully.