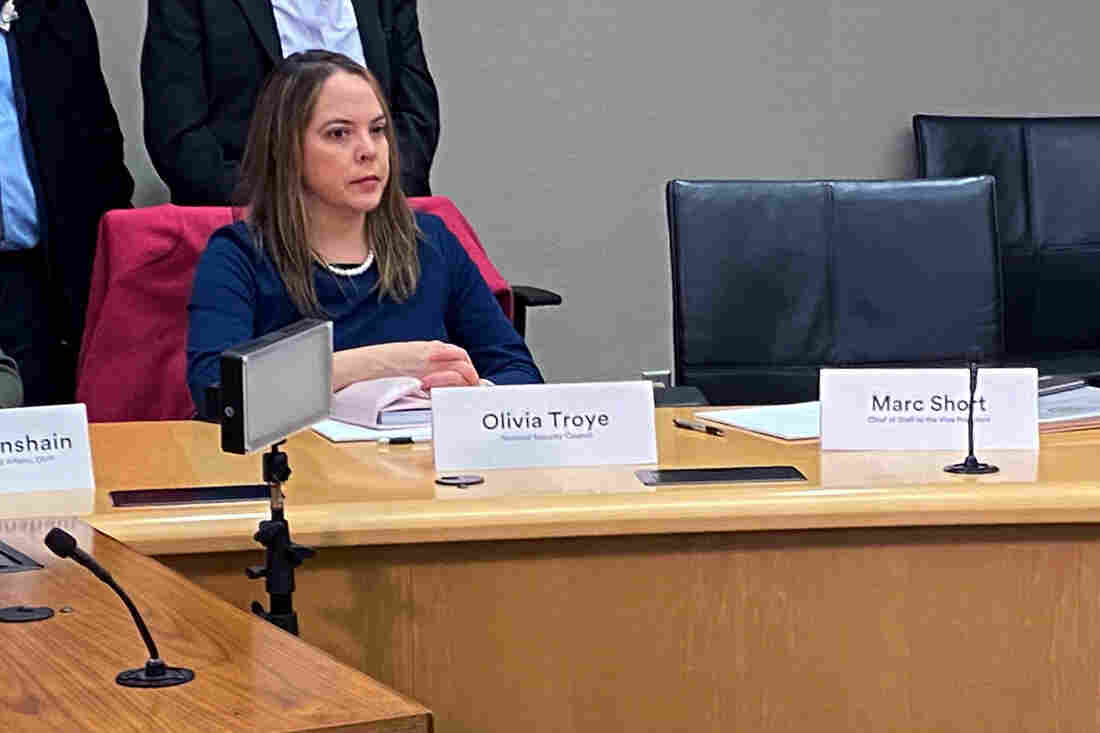 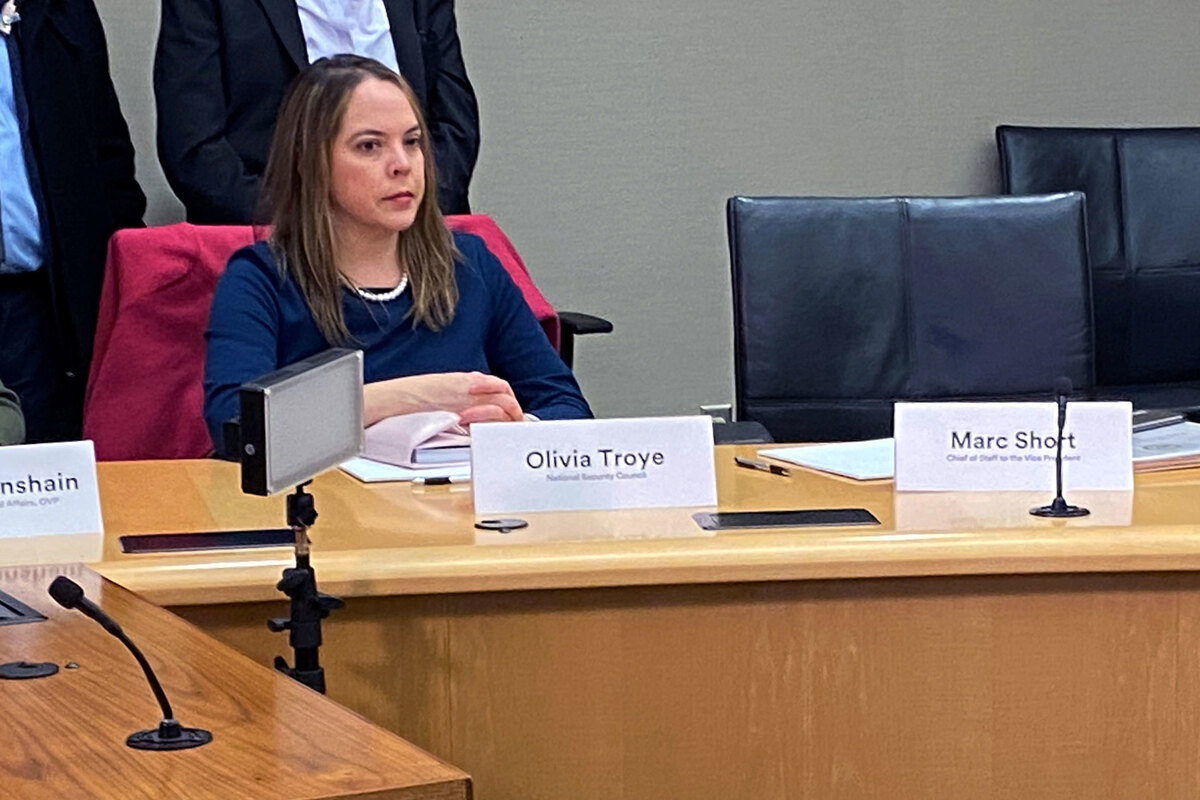 President Trump has consistently told Americans "the complete opposite" of what his health experts have been telling him in private meetings about COVID-19, according to Olivia Troye, who until recently worked on the the White House coronavirus task force.

"They brief him. They tell him the facts. They're telling him the truth. They're telling him things that need to be done," Troye said in an interview with NPR's Ari Shapiro. "And it is a very frustrating environment to work in, when you know that the message that is going to be relayed is counter to what you just told him."

Troye, who worked for Vice President Mike Pence for two years as a special adviser for homeland security and counterterrorism issues, says the Centers for Disease Control and Prevention often faced two challenges: coping with a massive coronavirus outbreak in the U.S., and navigating political interference as the agency sought to protect the American people.

CDC Director Robert Redfield has faced "very challenging dynamics" from the White House, Troye said, "at times when you're changing the wording and guidances to fit a narrative, to play down the severity of the virus or cases."

Her former colleagues at the CDC "went back and forth with a number of entities in the White House that wanted specific language included in guidances," Troye said, "that they did not believe was factually correct and didn't represent the data that they were seeing."

Troye decided to speak out after resigning from her post in August. The White House has described her as someone who was fired and is now disgruntled — a claim Troye denies.

Troye made headlines earlier this month when she was featured in an online attack ad from the advocacy group Republican Voters Against Trump, saying that Trump's biggest concern about the global pandemic was its potential to hurt his reelection chances, rather than its toll on the American people.

In that ad, Troye said that as early as February, the Trump administration "knew it wasn't a matter of if COVID would become a big pandemic her in the United States, it was a matter of when."

But the president was not open to hearing such predictions, Troye says. As the country faced what could be the biggest pandemic in living memory, she said, "the president did a great disservice" to members of his own government who were trying to manage the crisis.

"Starting from calling it a hoax, to telling Americans this wasn't real and perpetuating false narratives — that was dangerous," Troye said. "It had a significant impact on how Americans would perceive the information coming out of the White House."

Troye appeared in the anti-Trump ad days before the U.S. hit a grim milestone of 200,000 deaths from COVID-19 — the most in the world. Despite having less than 5% of the global population, the U.S. has suffered more than 20% of COVID-19 deaths worldwide.

The president's false and misleading claims about the coronavirus have not let up as the November vote approaches, Troye warns.

"It's increasingly disturbing to me that as we get closer to the election, this rhetoric continues to ramp up," she said, citing Trump's comments that contradict experts' analysis of U.S. case numbers and promote some ideas that she says are simply dangerous.

"The day the president suggested people inject themselves with bleach was shocking," Troye said. But she notes Trump has also rejected an essential tool in fighting the coronavirus: a face mask.

"There were numerous discussions on ways that we were going to slow the spread of the virus with the mask being the most basic critical aspect of it," Troye said. "We knew that it spread through aerosol early on. There were a lot of unknowns about the virus, but we knew that wearing a mask was going to be critical."

Wearing a face mask was seen as something every American could do to to help quash the virus. But Trump did not wear one in public until July 11 — four months after the pandemic was declared. Since then, he has been sharply criticized for not modeling safe behavior by consistently wearing a mask.

The president's example not to wear a mask at public events set the tone in the White House, Troye said.

"Even in the West Wing, it was sort of, you were looked down upon when you would walk by with a mask," she said, referring to the building that houses administration offices.

When asked how Trump might have undermined the fight against COVID-19, Troye said the president failed to provide leadership.

Troye describes herself as a lifelong Republican, but she says she will vote for Democratic candidate Joe Biden this fall, citing what she calls a critical moment in U.S. history.

"I think it's country over party right now for me, and what I've seen in the past two years of my tenure in the White House has been upsetting," she says. "I think that we need to get to a point where we steer our country back to a sense of normalcy, a sense of who we have been in the past."

Trump, she said, "will not lead us in that direction."

Troye left her White House job in August, an exit she describes as a voluntary resignation. But after Troye went public with sharp criticisms of Trump earlier this month, administration officials responded with an attack of their own.

"Olivia Troye worked for me. I fired her," said retired Lt. Gen. Keith Kellogg, the national security adviser to the vice president. Alleging that Troye's job performance had declined, Kellogg added, "I'm the one that escorted her off the compound."

Kellogg made those remarks at a White House briefing in which he also said he never heard Trump say the things Troye claimed.

"I'm very proud of the task force and the work it's done," Kellogg said. "I am not proud of Olivia Troye."

Responding to ­Kellogg, Troye said via Twitter, "Sad that Gen. Kellogg is telling a bald faced lie to protect the President. I resigned on my own accord & was asked to stay. He never escorted me out. He knows this. I wrote a note thanking all the colleagues who had worked so hard with me in spite of POTUS & I stand by that."

She also posted an image of a commemorative coin Kellogg gave her upon her exit, linking to a social media post in which Troye had spoken warmly of the retired general.