Accessibility links
Review: 'Bestiary,' By K-Ming Chang K-Ming Chang's debut novel is full of mythical beasts that roam through the lineage and the stories of a Chinese family in Arkansas, stories that come alive and help them endure pain and trauma.

This 'Bestiary' Lives In A Family's Multigenerational Stories

This 'Bestiary' Lives In A Family's Multigenerational Stories 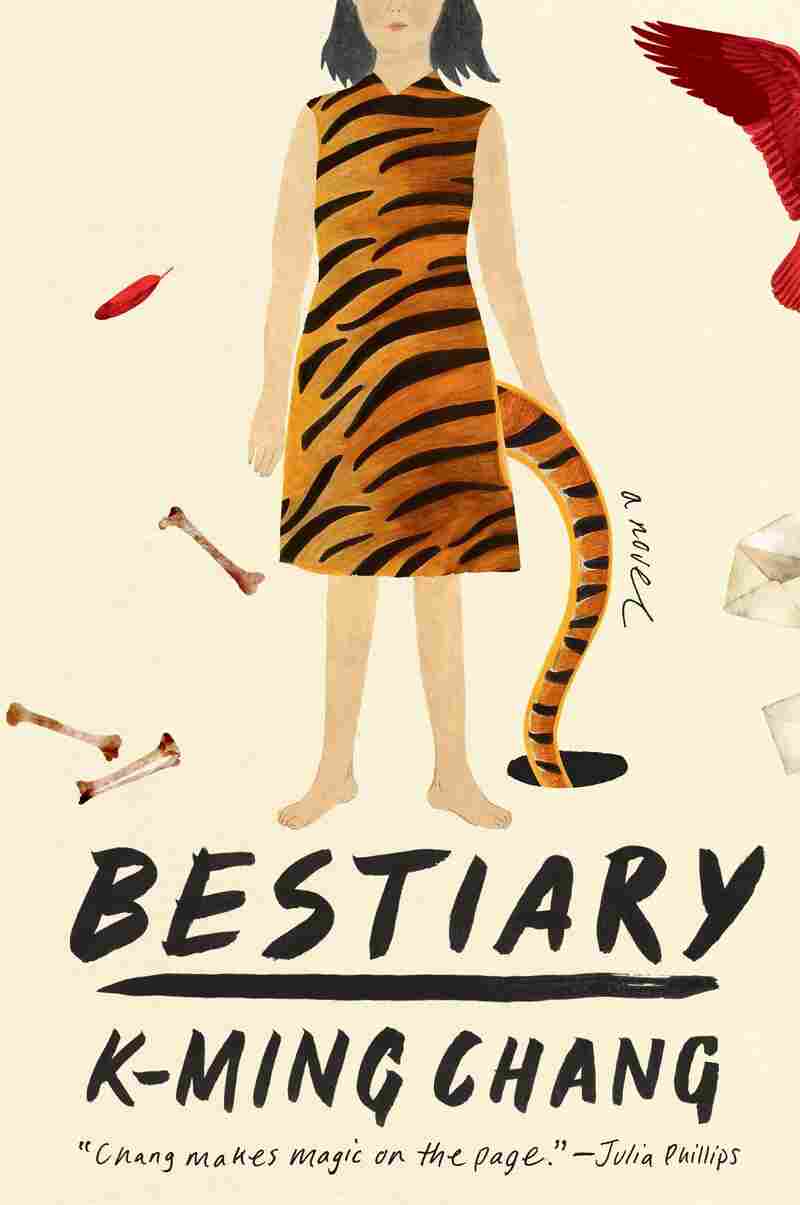 Enlarge this image
One World 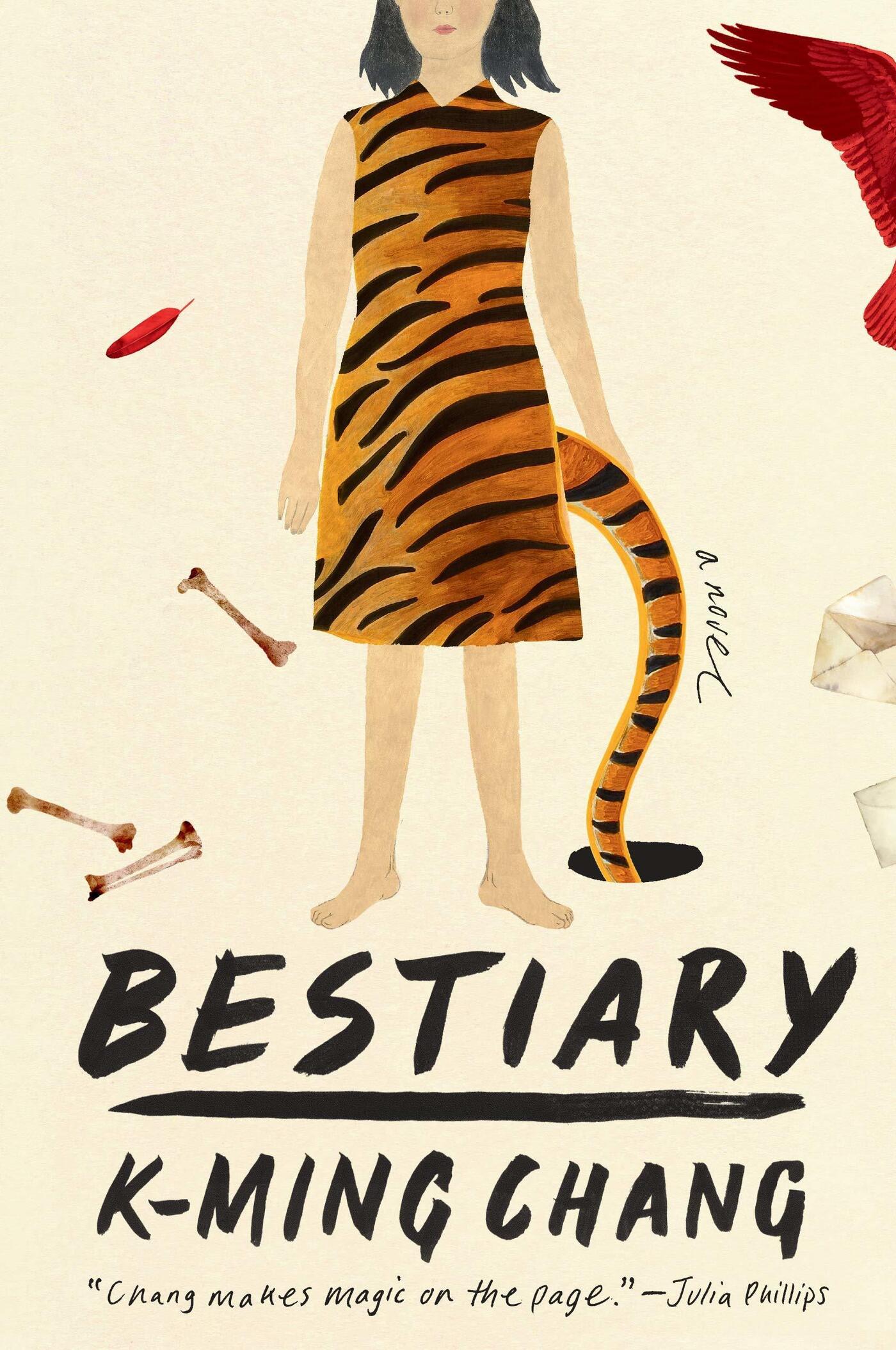 A bestiary is, traditionally, a compendium of beasts, both real and mythical. It's fitting, then, that K-Ming Chang's debut novel is titled Bestiary, for it too is a compendium of real and mythical beasts — some human, some animal, most a bit of both — that roam through a family's lineage and the stories its members tell each other from one generation to another. Everything is alive in their stories: The ground grows mouths, rivers become women, roads become rivers, crabs give birth to girlchildren, trees get up and march off in search of lost loves.

In the book's opening chapter, Mother tells Daughter about moving from Taiwan (which the family just calls "the island") to Arkansas, where her father, Daughter's Agong, buried the last of the gold he came with and promptly forgot where it was. Grandmother beat him with every item imaginable trying to get him to remember, but as Mother says, "his skull is full of snakes instead of brains. He's all sold out of memories." Here are two of the beasts, then, just in the first couple of pages — Grandmother, whose violence never makes Agong's memories resurface, and Agong's skull full of snakes, snakes which awaken Agong's body to his former occupation as a soldier and make him act out his flashbacks.

Daughter narrates the majority of the book, the contours of her own life weaving in and out of the stories she's heard from other family members. Their presence in her mind feels as urgent and real as her own coming of age, which is far from easy: Daughter's parents are always behind on rent, her accent is never quite right at school, and her father, whom she loves fiercely, is physically abusive. When he goes to mainland China for work, he sends money back to the family in the U.S. (a reversal of the familiar narrative in which immigrants to the U.S. send money to families back in their countries of origin) — until, that is, he doesn't. Mother takes the two children to China to look for him, resulting in a less than happy family reunion. Late that night, when Daughter wakes up to see her father has left a white kite by their bed — perhaps as a reminder of better times, perhaps as an apology — her brother destroys it, his anger at his father's continued abuse palpable. He then runs up to the roof of the hundred-plus-story-tall building and leaps off it, his father on his heels jumping off right after. But this is not the kind of book where people plunge to their deaths so easily:

When my brother was halfway down and my father a breath above him, their bodies began to rise. They plateaued in the air, horizontal like kites, and flapped in the wind before riding it upward and out, blade-arching through the air. [...] They tilted toward each other, circling, and from the ground it might have looked like they were fighting or dancing. Kite-strings unraveled from their underbellies, descending like strands of spun silk.

Violence is not one-dimensional in Bestiary; Chang doesn't excuse it, especially when it takes place between the family members, but she has her narrators contextualize it in their stories, reaching back through memories dressed up with myths to find the beauty that coexists with hurt and trauma. "You think burial is about finalizing what's died," Mother tells Daughter early on. "But burial is beginning: To grow anything, you must first dig a grave for its seed. Be ready to name what's born." Yet Grandmother, Mother, Daughter, Agong — none of them have names in English in the book, this aspect of their identities untranslatable, to an extent, from the Mandarin they mostly speak to one another, itself a colonizer of Grandmother's first tongues, Tayal and Yilan Creole (language, in other words, is another form of complex violence).

Though Grandmother, Mother, and Daughter each endure traumas, they are storytellers, their words both plumbing and transcending their pain to weave a wide range of additional emotions and experiences.

Daughter's life takes a turn for the rapturous when she meets Ben, a girl from Ningxia who spits a plum pit at her feet, a moment that Daughter calls "the birth of my thirst." Daughter and Ben's fast friendship quickly becomes something more, and their feelings need no explanation or excuse. They recognize one another in ways more important than language and they share their bodies as readily as their family histories and stories. Indeed, Daughter's family tales include their own queer love affairs, and the visceral bodily sensations and details that fill the prose are an indicator of a queer aesthetic as well.

Though Grandmother, Mother, and Daughter each endure traumas, they are storytellers, their words both plumbing and transcending their pain to weave a wide range of additional emotions and experiences. Their stories color their everyday lives with magic, so that an aunt's frequent strokes become "a bird in her brain that laid eggs of blood," an aisle at Costco is "wide enough for an airplane," its "ceiling high as a church's," where a family sleeping in a car together can awake with the windows steamed, almost cozy, "bodies hammocked in heat." Chang's facility for making even mundane or traumatic events beautiful with words is a reminder that stories are, among other things, some of our very best survival tools.

Ilana Masad is an Israeli-American fiction writer, critic, and founder/host of the podcast The Other Stories. Her debut novel is All My Mother's Lovers.