Accessibility links
Baseball Rarity: Cubs And White Sox In Playoffs, But Chicago Fans Can't Go To Games The strange, shortened season just got more weird, with both teams in the playoffs for just the third time ever. Fans would normally dance in the streets or cram into bars, but it's 2020, so no. 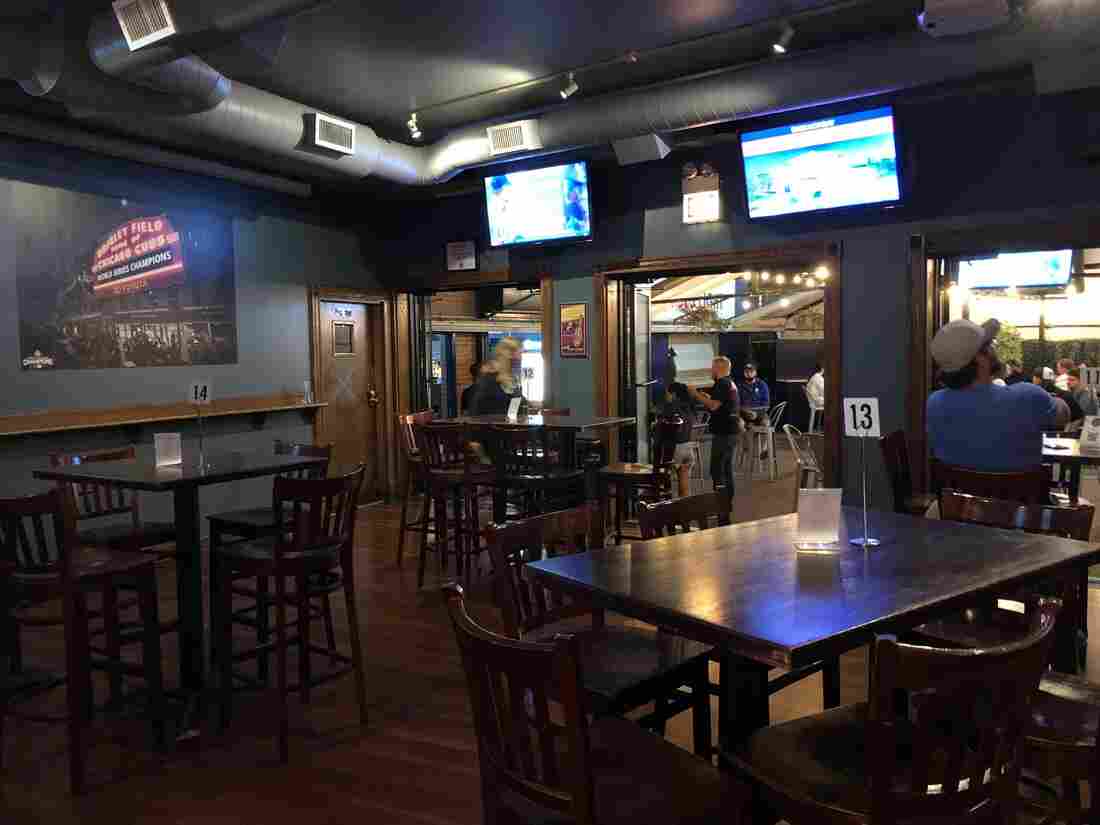 Bernie's Tap and Grill across the street from Wrigley Field in Chicago, would normally be packed with people shoulder to shoulder during a crosstown Cubs/Sox series. David Schaper/NPR hide caption 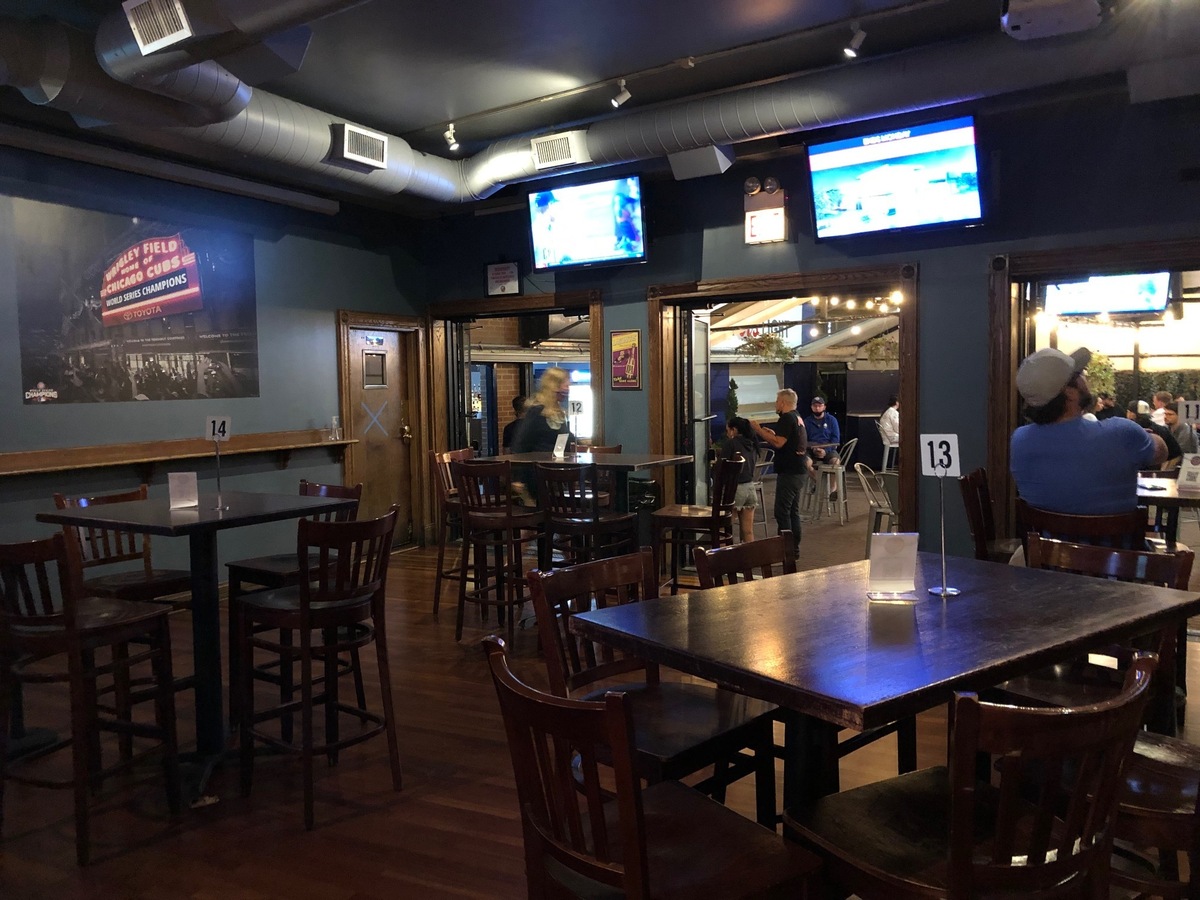 Bernie's Tap and Grill across the street from Wrigley Field in Chicago, would normally be packed with people shoulder to shoulder during a crosstown Cubs/Sox series.

(After a strange, shortened season with no fans at the ballparks, the Major League baseball playoffs are now underway. And this year, there's something else unusual: both Chicago teams are playing in the postseason. It's just the third time that the North Side Cubs and the South Side White Sox reached the playoffs in the same year.

In a normal year, fans on both sides of town would be pouring into the streets or packing into sports bars to celebrate. But this is 2020, a year of mask-wearing and social distancing, and limits on drinking and dining establishments in the city is putting a damper on what could turn out to best year for baseball in Chicago in more than a century.

"It's obviously way quieter. It's definitely weird," says Chicagoan Colleen Gettings, 54. With her mask on, she was sitting with friends at a table spaced far apart from the others in the beer garden at Bernie's Tap and Grill, across the street from Wrigley, watching the Cubs play the crosstown rival White Sox over the final weekend of the season.

In Chicago, bars and restaurants can serve customers outdoors at tables spaced at least six feet apart. Only establishments with food can serve customers indoors, and they are limited to 25% of capacity. With the city's COVID-19 rate improving, those restrictions will be eased slightly as of Thursday, but it's still a far cry from the huge crush of fans that would normally gather at taverns in Wrigleyville for playoff baseball.

"If this were, like, a normal season without COVID, you wouldn't be able to move in here," says Steve Nitz, 34, while sitting at an outdoor table at Bernie's.

"It's nice being able to just go in an outdoor area like this and have the TVs," adds Nitz, a White Sox fan who says he's watched nearly every game this shortened season on television at home. This is the first time he's ventured out with a friend to watch a game.

"It does suck not being able to go to games," Nitz says, but getting out of the house on Saturday night for baseball was "really refreshing after four or five months of nothing." 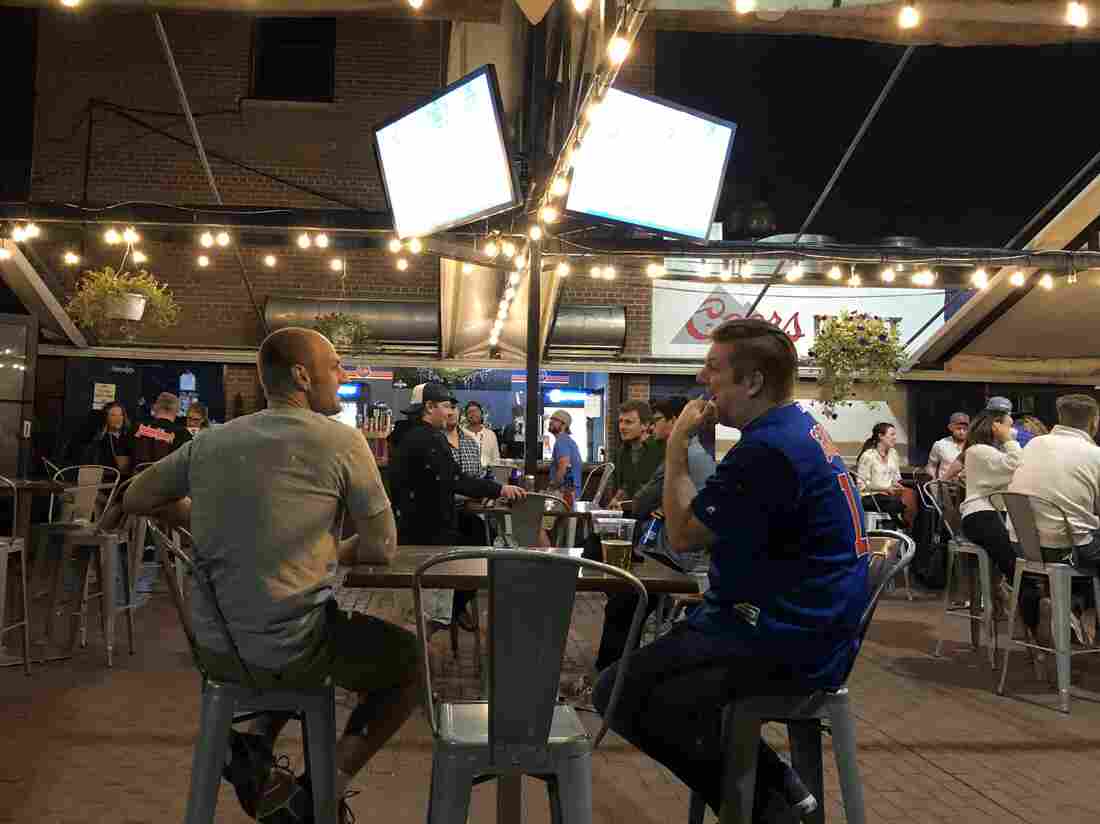 Sox fan Steve Nitz (left) and Cubs fan Paul Schmitz watch the crosstown rivals play each other last weekend in the beer garden at Bernie's Tap and Grill across the street from Wrigley Field in Chicago. David Schaper/NPR hide caption 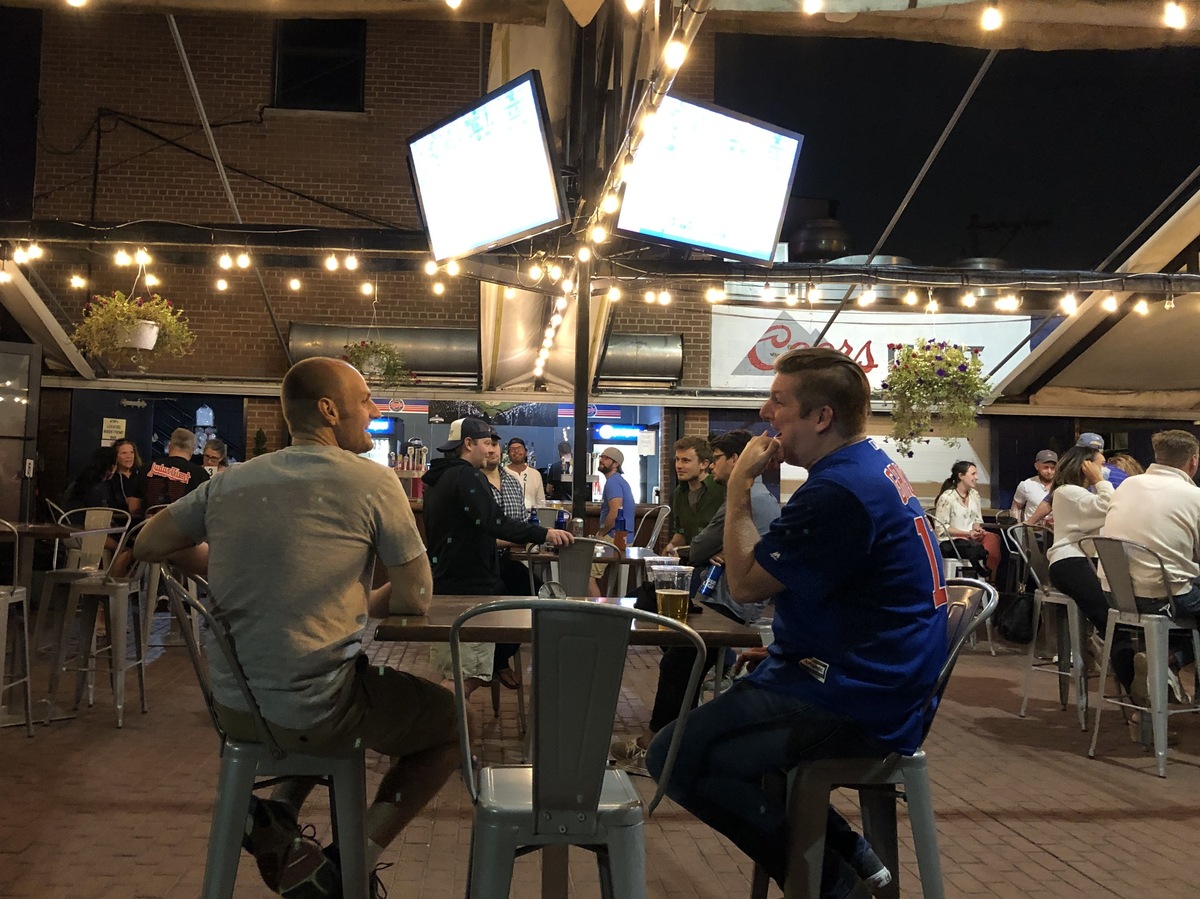 Sox fan Steve Nitz (left) and Cubs fan Paul Schmitz watch the crosstown rivals play each other last weekend in the beer garden at Bernie's Tap and Grill across the street from Wrigley Field in Chicago.

His friend, Cubs fan Paul Schmitz, doesn't mind the absence of scores of people squished shoulder to shoulder in the bar.

"I actually really appreciate the mood here tonight. It's been a lot of fun," he says. "It's been casual, which is nice, for Cubs-Sox. It tends to get a little intense for that rivalry."

About that rivalry, the baseball buddies with allegiances to opposite sides of town needled each other good naturedly quite a bit during the game.

"The White Sox do suck, I want to be very clear about that," Schmitz says.

Nitz, one of just a handful of fans in a White Sox jersey at this north side bar, rolled his eyes but wisely decided to hold his tongue.

While Sox fans and Cubs fans rarely see eye to eye, many here in Chicago are thrilled that both teams are in the playoffs. That's only happened twice before, in 2008 and way, way back in 1906, when the White Sox beat the Cubs in the World Series.

"I just think it's great for the city," says Colleen Gettings, who is one of the few Cubs fans who insists she holds no illwill toward the Sox or their fans. "It's giving people something to cheer about as opposed to all this other crap that's going on. It's giving us a reason to get out and bond and enjoy the sport."

"It doesn't feel as meaningful this year," Schmitz says. "Sixty games, 16 teams in the playoffs, to me, it diminishes a lot of what happens during the regular season."

"It's a shortened season so there is actually less room for error," says Gettings. "I mean, you've gotta be on your game, in my opinion, to make it to the playoffs."

"My fear is there would be an asterisk on the season, so if the Cubs or Sox won it, they'd have that," adds the 53-year old Davern. "But you know what, this is a tournament that has been going on since the beginning of July, with the best baseball players on earth."

Baseball Stadiums May Be Empty, But You Can Still Hear The Crowds

He points out that all 30 Major League teams "had the same opportunity to win or lose, and the Sox and Cubs are both in position where they have a chance to win it. So I don't know how you can't be ecstatic about that."

In a normal season, Davern would take his family to a few Sox games, and he'd often watch other games with friends at a bar. This year, he's taking in the strangely wonderful season from his couch, with a cold beer in his hand.

"I can't think of a better distraction, especially in a town like Chicago that certainly is bruised from 2020 for a bunch of different reasons," says Davern, adding that a year like this makes the more than century old rivalry between the Cubs and the White Sox worth celebrating.

"It's part of being from Chicago. A family party should involve some kind of disagreement about the Cubs and the Sox," he says. "It's the greatest Chicago discussion and I think it's accidentally uniting in some ways in a year like 2020, where everything is so divisive."

Of course, the dream matchup here is for the Cubs and Sox to play each other in the World Series. As unlikely as that may be, the cruel joke of 2020 is that no matter who wins in the playoffs, the World Series will be in a neutral ballpark in Texas, and fans won't be there.