Accessibility links
'I Like What I See': FAA Chief Flies 737 Max, But Not Ready To Recertify Plane Steve Dickson took a Boeing 737 Max on a test flight Wednesday and says "It responded well," as regulators inch closer to ungrounding the troubled jetliner.

'I Like What I See': FAA Chief Flies 737 Max, But Not Ready To Recertify Plane

'I Like What I See': FAA Chief Flies 737 Max, But Not Ready To Recertify Plane 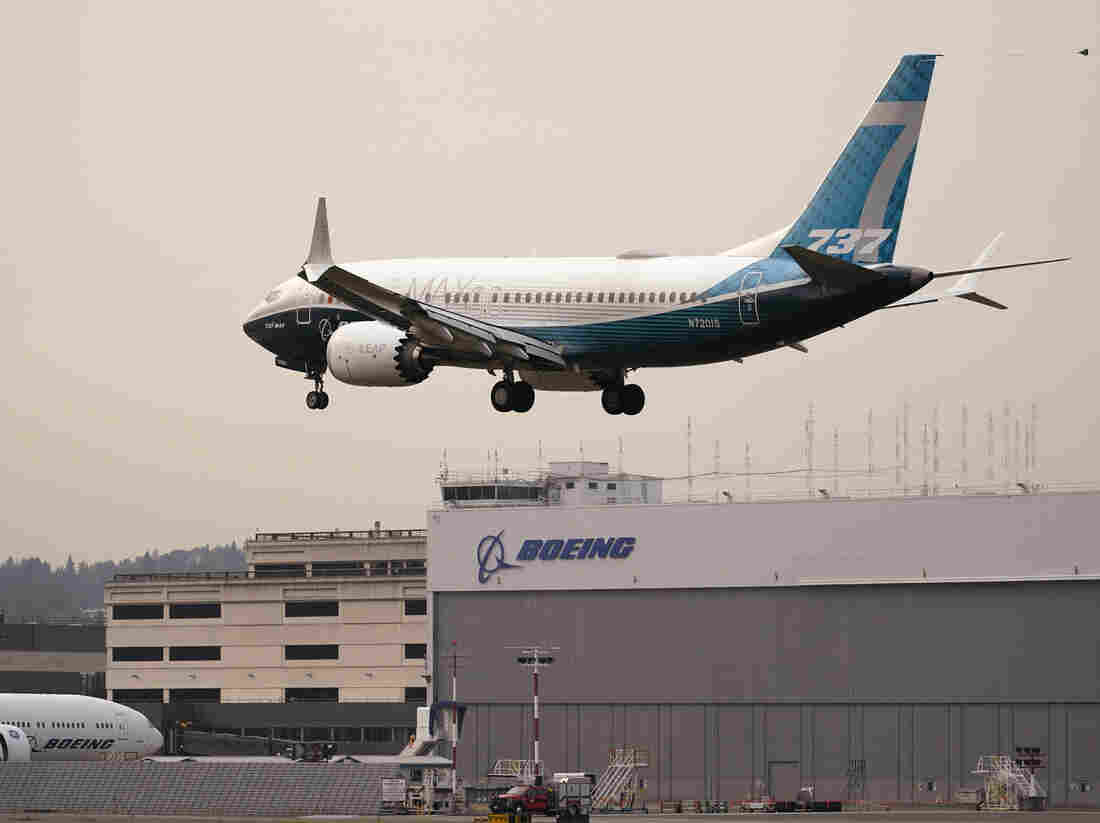 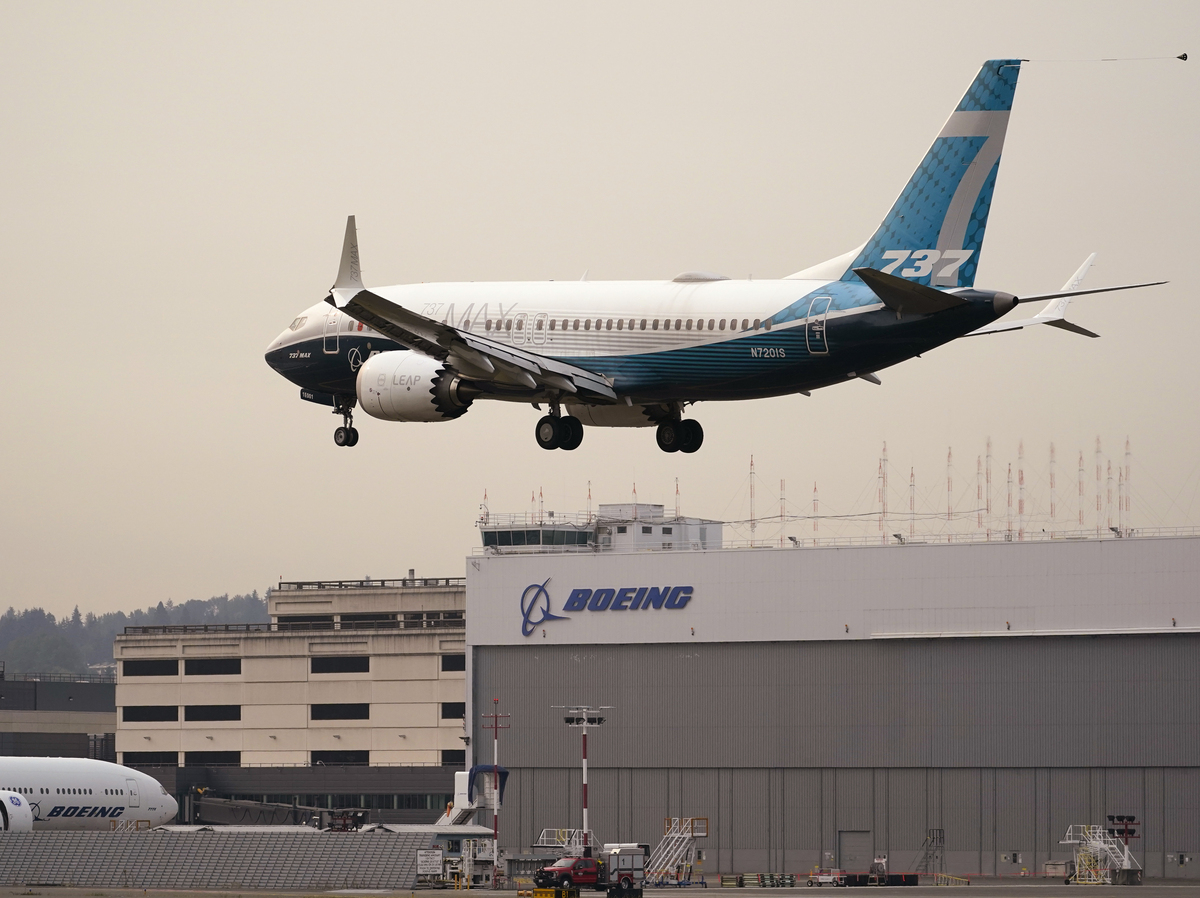 The head of the Federal Aviation Administration conducted his own test flight of a Boeing 737 Max Wednesday, and he's giving it a positive review, as the regulatory agency gets closer to allowing the troubled jet to return to commercial passenger service more than 18 months after it was grounded.

Today, FAA Administrator Steve Dickson piloted the @Boeing 737 MAX in Seattle. A virtual news conference will start at 11:30 AM PT/2:30 PM ET and will be live streamed across all FAA digital platforms. pic.twitter.com/bsBwkgtfez

The plane has been prohibited from flying since March of 2019, after a 737 Max operated by Ethiopian Airlines crashed shortly after takeoff from the airport in Addis Ababa, killing all 157 people on board. That was the second 737 Max to crash in less than five months; the first crash happened in Indonesia on Oct. 27, 2018, killing 189 people.

Both crashes were caused in part by a flawed automated flight control system, called MCAS, that was activated by faulty data from a single sensor, and repeatedly forced the planes into nose dives as the pilots struggled to regain control.

FAA Administrator Steve Dickson, a former Delta Air Lines pilot, sat at the controls of a 737 Max and flew it through a number of different scenarios to test how the plane handled in crisis situations and to evaluate Boeing's revisions to the flight control system.

"I completed a number of test profiles today to examine the functionality of the aircraft and I liked what I saw, so it responded well," Dickson told reporters in a news conference after the flight. "I did two landings and also some air work maneuvers over about a two hour period... and I felt prepared. I think most importantly, I felt that the training prepared me to be very comfortable."

In the days leading up to his test flight, Dickson says he completed new pilot training procedures and a trial run in a 737 Max simulator.

The FAA administrator's test flight was a significant step in the agency's review of design and software changes made by Boeing to the flight control system after the crashes, as the regulatory agency works to re-certify the 737 Max and return the plane — long a mainstay of medium-haul routes — to passenger service.

But Dickson says his agency's technical and test flight data reviews are still ongoing and the re-certification process cannot and will not be rushed.

"We are not to the point yet where we have completed the process," Dickson said. "We're in the home stretch but that doesn't mean that we're going to take shortcuts to get it done by a certain date."

"The FAA and I in particular will not approve the plane for a return to passenger service until I'm satisfied that we've adequately addressed all of the known safety issues that played a role in the tragic loss of 346 lives aboard Lion Air flight 610 and Ethiopian Airlines flight 302."

But some family members of those killed call the test flight "a PR stunt" and "a gimmick." They're calling on the FAA and Boeing to release the technical descriptions and test data they are using to re-certify the plane, so it can be analyzed by outside aviation experts.

"Without that secret data, independent experts and the public cannot confirm whether the aircraft is safe," said Michael Stumo, whose 24-year old daughter Samya Rose Stumo, was among those who died in the Ethiopian 737 MAX crash.

But Dickson on Wednesday insisted "This is not a publicity stunt."

"This is simply the fulfillment of a commitment, a promise I made within my first few weeks at the FAA," he told reporters.

In response to the call to share data from the FAA's analysis and review of the 737 Max, Dickson said: "I think we have been transparent to an unprecedented degree... we are providing everything we can within the law," but he added that "much of the data that I believe is being asked for is proprietary in nature."

Since taking the helm of the FAA last fall, Dickson has said repeatedly that he was "not going to sign off" on the 737 Max "until I fly it myself and am satisfied I would put my own family on it without a second thought."

There are indications the 737 Max could be re-certified by the FAA sometime in late October or November, putting it on track to return to service before the end of the year or in early 2021.

Last week, Dickson's counterpart at the European Union Aviation Safety Agency (EASA), Patrick Ky, said his agency expects to approve the 737 MAX to return to service in November, not long after the FAA lifts its order grounding the plane.

An investigative report from the House Transportation Committee harshly criticized both Boeing and the FAA for a flawed initial design of the 737 Max, and what it called "grossly insufficient oversight" by the agency.

Congressional investigators found evidence of a relationship between the FAA and Boeing, a company that it is supposed to regulate, that some describe as "too cozy." Whistleblowers complained of "undue pressure" to rush the development and certification of the plane while keeping costs down on both Boeing safety engineers and FAA employees, amid allegations that Boeing misled regulators and withheld information detailing what the MCAS system did.

The House Transportation Committee passed bipartisan legislation Wednesday that would make significant changes to the aircraft certification process and strengthen FAA oversight, while curtailing a program critics say allows manufacturers such as Boeing to do a certain degree of self-regulation.

That legislation now moves to the full House for a vote, but before becoming law will have to be reconciled with similar legislation that has passed the Senate.